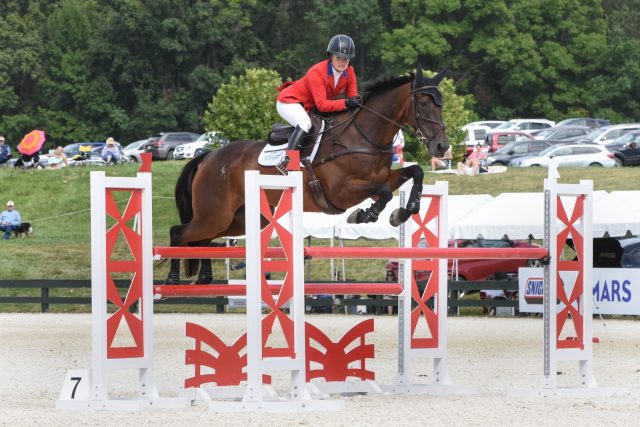 Astute score-stalkers may have noticed that that Lynn Symansky was in the irons at Three Lakes Horse Trials this weekend jockeying several horses from Hannah Sue Burnett’s regular string. If you wondered why, Hannah Sue posted on Instagram yesterday to explain: she had to have surgery in November to repair her core muscles which were damaged in a fall in October. The recovery period after this surgery is a bit longer and as riders we know how important those core muscles are!

We hope you heal up as quickly as possible, Hannah Sue! Best wishes for a speedy recovery from EN.

We’re also sending our best wishes for a speedy recovery to Joanne Bridgman, a member of the 1978 World Championship for New Zealand amongst other accolades, including currently running a highly-regarded sale barn. Joanne and her brother were involved in a car crash on a highway in her home country, the cause of which is currently unknown, which devastatingly left a person in another car dead. Joanie has upwards of 23 bones broken and has already had two surgeries, her brother also suffered broken bones, and her dog, who was riding in the car as well, also sadly died. [Well-known horse rider recovering after horror car crash, with several bones broken]

I don’t know about you, but I would be over the moon if I could spend five days with Pippa Funnel. I’m sure the six riders in the The Windrush Young Eventers Programme were as well when they recently got to do just that. Horse & Hound was invited to watch their final day of training with Pippa and got the scoop from each rider on their biggest takeaway over the past five days. [Basics, rider position and attention to detail: vital lessons from Pippa Funnell]

**SPONSOR SPOTLIGHT ** . . -FLEECEWORKS SHEEPSKIN & THERAWOOL PADS- . . I have been riding and using Fleeceworks pads since 2008 and I can’t imagine putting anything else on my horses backs. These pads are not only breathable, allowing heat to escape and keep the horses muscles feeling good, but they have been a life savor in making sure my saddles are fitting properly. These pads have a shimmable option so if you need any kind of custom fit they will allow you to adjust the pad when necessary. These long lasting thera-wool & sheepskin pads have been a staple in our barn and we are grateful to @judithmcswain for making sure every detail is looked over. . Visit @fleeceworks at www.fleeceworks.com and let them know NLE sent you. Your horses will thank you! #fleeceworks #sheepskinpads #horses #eventing #showjumping #dressage #teamnle