Today marks the end of a three-day social media boycott across a number of sporting federations, which has been undertaken as a way to encourage more considerate and sympathetic use of these platforms. Simply giving up social media for the weekend might not seem like an effective way to curb online bullying, but it can have a powerful impact – by showing the companies behind these platforms how much money they could potentially lose if their users were to jump ship, they’re pressured into enforcing more robust anti-bullying and anti-bigotry policies on their apps.

Regardless of whether you took part in the boycott, let’s all commit to being the best versions of ourselves online this week: support, rather than criticising; celebrate, rather than envying; like and share to spread joy, not to demoralise others. We’re lucky to have access to one another in a way that was previously impossible; let’s use it to bolster our little community and make it a great space for everyone to co-exist in. (Oh, and definitely watch the above video through to the end for possibly the funniest Lanky Will cameo I’ve ever seen.)

National Holiday: It’s National Specially-Able Pet Day. This is our three-legged, deaf, and half-blind farm lurcher, Roo, reminding you that it’s the wonky bits that make her (and her fellow unique animals) wonderful. 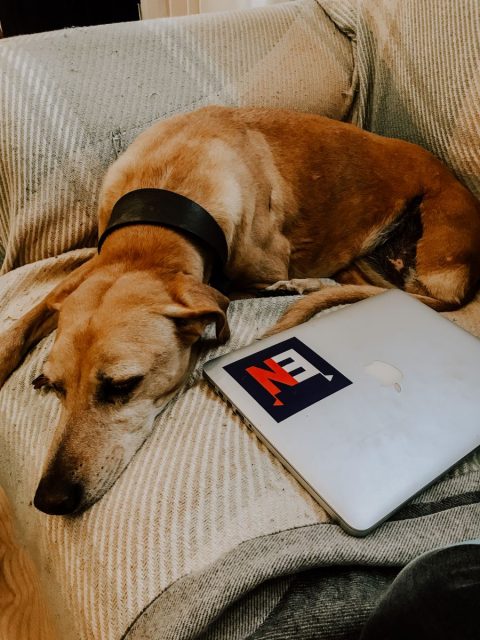 It’s been a busy weekend around the world for FEI-level eventing, with CCI2*-S sections on offer at new fixture Cirencester in the UK and Rotorua in New Zealand, which also held a CCI3*-S. The two biggest events on the calendar, though, were France’s Saumur and Poland’s Strzegom, both of which held sections from two-star through CCI4*-L, providing crucial opportunities for top-class horses and riders to gain MERs ahead of next month’s Olympic qualification deadline.

Saumur attracted a star-studded field and offered us the chance to see the best of the French contingent in action – and as we’ve mentioned previously, they have an enviable bevy of ‘up-and-coming’ young Advanced horses who we’re expecting to be almost unbeatable in the years to come. But even the likes of Tom Carlile’s Birmane (second in the CCI4*-L) and Astier Nicolas’s Babylon de Gamma (third in the CCI4*-L) couldn’t trump a consistently excellent external force. Germany’s Julia Krajewski led throughout with the eleven-year-old (and, coincidentally, French-bred) Amande de B’Neville to take the horse’s first win at this level. This is an enormously exciting result for the mare, not least because she unexpectedly became the rider’s top horse this spring after the shock announcement that her two-time National Champion, CCI5* winner and Olympic mount Samourai du Thot was to be retired early after a freak accident cost him an eye. That Julia has been able to bounce back after this enormous blow – plus the still relatively recent loss of fischerChipmunk FRH to fellow German Michael Jung – is testament to her strength in depth and the care she takes in the production of her horses. It should also fill us all with some healthy fear about the German efforts to come in this summer’s Games. Check out the full results from Saumur’s CCI4*-L here.

Over in Poland, a certain Mr Tim Price looked no worse for wear after a long flight back from Kentucky, where he’d finished in second place and spent a busy week sharing half the rides in the field (well, it probably felt like it, anyway) with wife Jonelle. He took the win in the CCI4*-L riding new mount Vitali in their first FEI event as a partnership. The eleven-year-old gelding was produced through CCI4*-S by fellow Kiwi James Avery, and notably led the Blenheim eight- and nine-year-old CCI4*-S dressage on his Advanced debut back in 2018. He ultimately finished sixth there — his fifth top-ten FEI result in a row — but that was the last time we saw him out at an international eventing fixture. Since taking on the ride, Tim took him along to the Price family’s Spanish showjumping exodus earlier this year, where he jumped well in CSI1* and 2* classes. At Strzegom, he duly led the first phase on 28.7 — the only horse to go sub-30 in the CCI4*-L — but then slipped to third place after cross-country after adding some time penalties. A clear round on the final day pushed the pair back up to top spot, followed by Switzerland’s Mélody Johner and Toubleau de Rueire in second and the Netherlands’ Merel Blom and Ceda NOP — her reigning National Champion — in third.

Merel Blom was to be victorious in the CCI4*-S aboard The Quizmaster, followed by Sweden’s Niklas Lindbäck and Focus Filiocus in second and Germany’s Andreas Dibowski and Brennus in third. Our kudos to the organising team behind this much-loved venue, who managed to ensure all of the cross-country phases across the levels could be run before the onset of the inclement weather. Check out the weekend’s results here.

While digging out foundations for a swimming pool in Las Vegas, a team of builders discovered something unusual. Their find? The jaw, shoulder blade, and leg of a horse – believed to be up to 14,000 years old. [Horse Fossil, Possibly From the Ice Age, Is Found in a Las Vegas Backyard]

We all know that great horses and great riders are nothing without the superstar grooms behind them. That’s true regardless of the discipline in question – and for Zoe Smalley, travelling head lass to racing trainer Henry de Bromhead, her extraordinary efforts have seen enormous rewards, including a history-making Grand National victory. Relive her experiences for a bit of Monday inspiration today. [4.30am starts, 40,000 steps a day and the ‘best time of my life’:  Henry de Bromhead’s travelling head lass reflects on a ‘crazy’ few weeks]

And finally, if you felt personally victimised by that photo of Boyd Martin chilling (quite literally) in an ice bath, here’s the story behind it. Spoiler alert: the boy dun broke hisself too dang much. [The Story Behind That Photo of Boyd Martin in the Ice Bath]

In need of inspiration? Ingrid Klimke‘s got some for you.