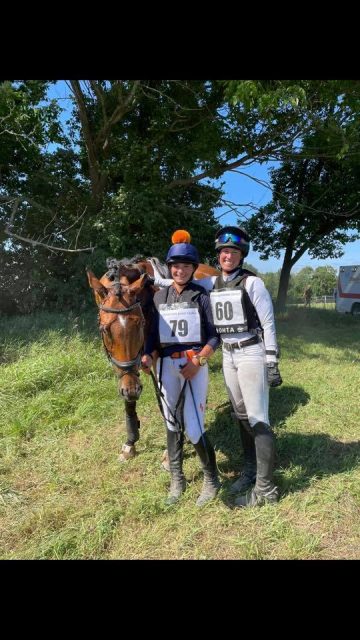 We were all so bummed for Canada’s Holly Jacks-Smither when she had to make the tough — but totally right — decision to retire her best friend, More Inspiration, from upper-level eventing after the discovery of a heart murmur at Kentucky this spring. But the plucky Thoroughbred isn’t in the equine equivalent of a nursing home — instead, he’s getting to enjoy life as a lower-level schoolmaster. He and working student  Ava Lema-Nilsson made their debut together over the weekend, tackling the Junior Novice division at Ontario’s Grandview Farm, where they finished second.

“I have never been one to enjoy sitting on the sidelines but the joy I felt watching them was overwhelming,” posted Holly on her Facebook page. “Sometimes things just work out how they should.”

France’s Mae Rinaldi and Boston du Verdon are the new Pony European Champions after leading from pillar to post and finishing on a 28.4 — the only sub-3o finishing score in the whole competition. Ireland’s Ben Connors and Cornafest Fred took the silver medal, climbing from 11th after dressage, while the Netherlands’ Sophie Weening and Hip Hop took bronze. The French also triumphed in the team standings, followed by Germany in silver and Ireland — whose riders rode for late compatriot Tiggy Hancock — in bronze. These plucky pony riders, who competed over a CCI2*-L track at Poland’s Strzegom, get the ball rolling on this year’s European Championship season.

France has had a great weekend all round; they also took top honours in their home Nations Cup leg at Haras du Pin, where a young Dutch team finished second and the Swedes finished third. France’s Gwendolen Fer won the class with Traumprinz (and finished fourth with her 2017 Pau CCI5* winner Romantic Love), while Tim Price’s 2019 Seven-Year-Old World Champion Happy Boy finished second in his four-star debut. Third place went to Germany’s Josephine Schnaufer-Völkel and Pasadena 217.

Finally, a small but determined four-star field of four competitors battled it out at Bromont, with Canada’s Brandon McMechan claiming victory on his Thoroughbred Oscar’s Wild after leading the dressage but moving into second going into the cross-country finale after knocking a rail. US-based Aussie Dom Schramm and Bolytair B finished second and even more impressively, did the whole thing on their own. We’re petitioning the FEI to give you a groom’s award, Dom!

Ian Stark may be one of the all-time legends of our sport, but that doesn’t mean he’s forgotten his roots. Earlier this month, and fresh off his commentary gig for the Olympics, he spent a long day in the pouring rain acting as stand-in coach for the Duke of Buccleach Pony Club’s grassroots showjumping team. Even better? They finished second under his expert tutelage. [From Tokyo commentary to Pony Club champs: eventing legend steps in as grassroots team coach]

In need of a healthy dose of ‘awwww‘ to start your week? This kiddo who couldn’t quite stay awake to the end of a lead-line class is a real mood. [Behind the Photo: Asleep at the Wheel]

We love it when local newspapers get excited about their nearby eventers. We love it even more when they get giddy over the horses. In this case, it’s consummate horse-crush Tsetserleg. You get ’em, Sexy Legs. [Comal County equine athlete shines at Tokyo Olympics]

And finally, Peder Fredricson — former Olympic eventer, now gold medalist showjumper — is one of the great heroes of the Games. Dive into his musings on good horsemanship and take his horse-first ideals into the week with you. [Peder Fredricson on horsemanship: “the horse is your responsibility, so you need to get involved and be engaged”]

The perfect balm for the soul after a busy weekend of eventing? A bit of wanderlust and jumping, courtesy of the Longines Global Champions Tour. I’ve been obsessing over the London leg as captured through EquiSportif’s lens, and I can’t wait to see more of her work.

Rewatch all the Pony Euros cross-country action (and wish you were a gutsy teenager again):