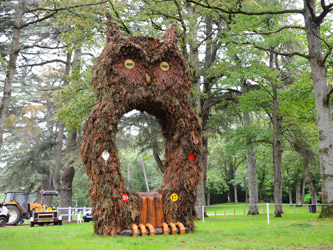 Across the pond, Le Lion d’Angers is running in France.  The event hosts Young Horse Championships for 6-year-olds (CCI1*) and 7-year-olds (CCI2*).  Americans Tiana Coudray and Logan Rawlings are both rode dressage in the CCI1* today.  Tiana  and Nick Gauntlett’s Saxon Legacy scored a 54.0 (23rd place), and Logan scored a 58.8 on S’prit Coeur Volant (37th).  Lara de Liederkerke leads with Alpaga d’Arville on 41.9.

EN’s favorite Jacky Green has also traveled to Le Lion to support Jonelle Richards and will be blogging continuously from the event. [Jacky’s Blog]

Le Lion D’Angers is widely recognized for identifying the rising stars of the future. There are many, many amazing horses who progress through the levels from Mondial du Lion to produce results at European, World Championship and Olympic level. Frenchman Nicolas Touzaint is the winningest rider in the history of Le Lion, having won six times between 2000 and 2005, including the 6 year old championship in 2000 and the 7 year old championship in 2001 riding Galan de Sauvagère, his double individual European gold medal winning mount. Michael Jung (Ze Terminator) won the silver medal in both the 6 and 7 year old categories with La Biosthétique Sam, and the 2011 Rolex CCI4* winner, King’s Temptress ridden by Mary King, is another Le Lion graduate.

The cross-country course design and decoration is amazing, and I absolutely love the jumps. It looks like a true championship course, and I’ll be getting up early on Saturday to watch some before I go to my own competition. If you want to see the courses on a satellite map and then click on the numbers to see the actual jumps you should CLICK HERE. (Note: if you want to see the different courses for 6 and 7 year olds, go to the top left corner of the map and you’ll see a little tab.)