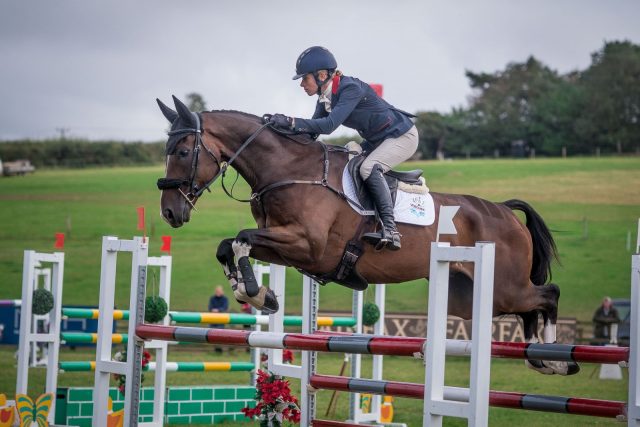 Before the start of competition at the Barefoot Retreats Burnham Market International, which took on Blenheim’s CCI4*-L and CCI4*-S classes, you’d have been hard-pressed to have chosen your winner from the illustrious entry list in the feature class. As Britain’s only CCI4*-L of 2020, and thus the most straightforward opportunity for riders to gain qualifying results for move-ups or Tokyo bids in 2021, it was deliciously well-contested, with many of the country’s top horses in attendance.

For that reason, it’s unlikely that anyone would have landed on Izzy Taylor‘s Monkeying Around as the likely victor from the jam-packed field. True, he has plenty of accolades behind him — he won the 2017 Six-Year-Old World Championship at Le Lion d’Angers and finished third in a CCI4*-S at Burgham last month — but his varied results at four-star wouldn’t give the casual punter an enormous amount of confidence.

2019 was the Hanoverian gelding’s first season at four-star, and through the year, he contested the level six times. At two of those runs, he was withdrawn before running cross-country, while three of them saw him complete with cross-country jumping penalties. Just one — a run at the summer CCI4*-S at Burgham — saw him jump clear, which was good enough to net him a sixth place finish on the undeniable strength of his prowess in the other two phases. 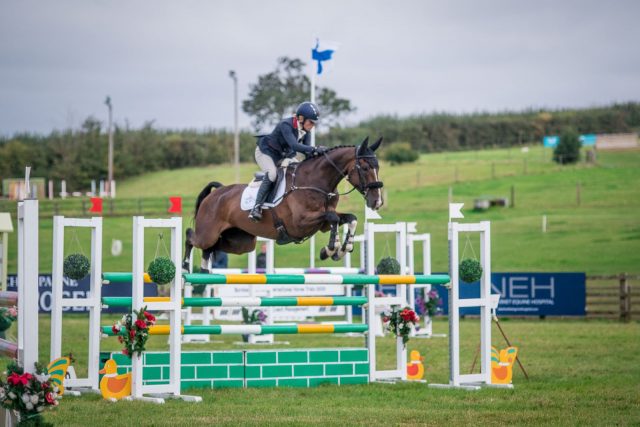 And so when Monkeying Around returned to Burgham last month and finished third, adding just 1.6 time penalties across the country, it was easy enough to take his strong performance with a pinch of salt — perhaps he simply got on well with the venue; perhaps it was a fluke; or maybe, just maybe, he’d finally figured it all out. Much hung in the balance of this Burnham Market run, and when he led the dressage on 23.2, it felt as though the whole world was watching to see which way he’d go.

A 23.2 finish is @izzytayloreventing’s lowest ever at CCI4*-L! With Monkeying Around, Izzy earned her 5th win at the level since she first won a CCI4*-L in 2014. Only 4 riders in the world have had more CCI4*-L wins since 2010. —Karin Donckers (9), @shane.rose.eventing (7), @fox.pitt.eventing (7), and @stuarttinney.eventing (6). Izzy’s previous PB at the level was 27.3. 👊 That’s a wrap on @barefootretreats Burnham Market run by @musketeerevents and livestreamed by @horseandcountrytv. It’s been a delight sharing all the stats, personal victories and PBs. . . . . #barefootretreats #burnhammarket #barefootretreatsburnhammarketinternational #livestream #horseandcountrytv #horseandcountry #eventingmanager

That he jumped a clear round inside the time is largely indicative of Izzy’s talent across the country. While Monkeying Around is certainly looking straighter and more forward-thinking than we’ve seen since that special six-year-old year, in which he became World Champion at Le Lion d’Angers, there’s still enough of a wiggle, and just enough stickiness, that any lesser rider would have found themselves closely inspecting the final water complex. But Izzy possesses a laser-sharp focus that helps her stick to a line even when things start looking a little bit backwards, and she certainly used all the skills at her disposal to get the horse home clear inside the time.

“He’s not blood on paper, but he felt beautifully blood yesterday — which is nice, because it’s hilly enough here,” says Izzy with a laugh. “They say it’s flat in Norfolk, but if there’s one hill then they make us go up it enough times!”

After that, showjumping was merely a formality for the scopey Hanoverian, and they romped easily to the win.

“He jumped fabulously. He felt very confident — it’s nice to be sat on a good jumper, obviously. Everyone can have the odd rail, no matter what you’re on, but he’s one you can ride positively rather than riding protectively, which is always a nicer feeling.”

While becoming Britain’s only CCI4*-L winner of 2020 is a great bonus — “you have to take these things where you can get them,” she grins — the real victory for Izzy is that the horse she’s believed in since she bought him as a four-year-old is truly growing into himself now.

“He’s a lot stronger [now than in 2019],” she says. “He’s actually quite a big horse now, which he wasn’t when we bought him. I go on about it, but he is only nine — realistically, we’ve been quite tough on him, because he was so good as a young horse. But for a horse that’s quite cheeky, he loves being good. He’s loved this week. He finished the cross-country with his ears pricked and looking a picture — he’d have gone round again five minutes later.

“He’s a very active-brained horse, and actually, it’s quite hard at home to keep him happy because you can’t go round and round the school, you can’t jump them every day, and the ground’s been shit this year, so what do you do with them? For a horse like him, it was a long time doing not much — it’s like a school kid that’s highly intelligent. You can’t keep testing them, but you’ve got to do something, otherwise they turn ASBO, don’t they?”

No one would accuse Izzy of being one of eventing’s soppier characters, but her delight in the horse is evident: “It’s very pleasing and also very exciting, that one that you’ve always believed in and had high hopes has actually come good,” she says, donning her mask to take her turn on the event’s deconstructed, socially-distanced podium. 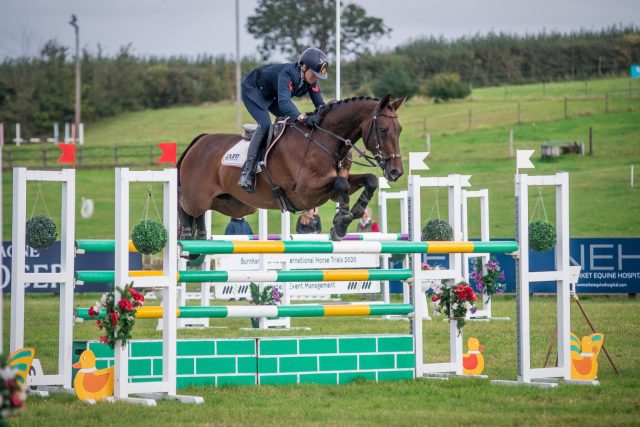 “I’m just over the moon with him — I can’t believe it,” she says, beaming. “For him to jump a clear today is just the icing on the cake.”

The 2017 Tattersalls CCI4*-L winners weren’t just battling against the horse’s prolonged absence from the sport, though — Vittoria was also making her long-format debut after an autoimmune disease diagnosis, which has affected the strength and mobility of her legs. This week, which began as something of a fact-finding mission, has served to prove to the British-based rider that regular movement is an enormous help to her — and the hot bath she enjoyed at her owners’ base on Saturday night didn’t hurt either.

“I’ve felt totally normal this weekend — I do feel a bit tired, but lockdown’s certainly taught me that it doesn’t help to be doing less.” 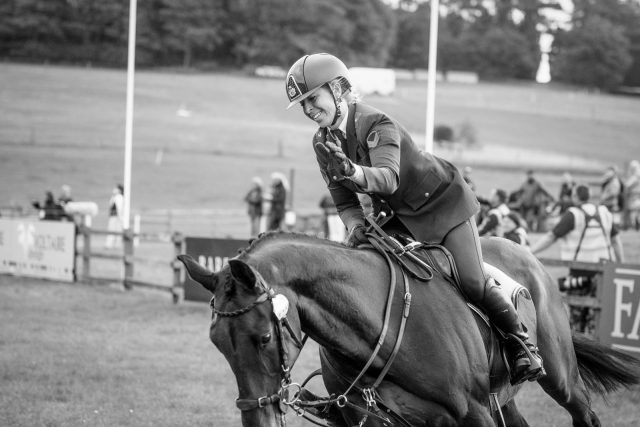 Pure joy: Vittoria and ‘Elvis’ make their return a good one. Photo by Tilly Berendt.

Vittoria and Elvis’s result — so close to a win, and yet so achingly far — is made all the more poignant by the fact that the horse’s owners could be there to experience it in person.

“It’s so special for them — between the live-streams and being here to watch, they’ve all been able to be involved this week.” 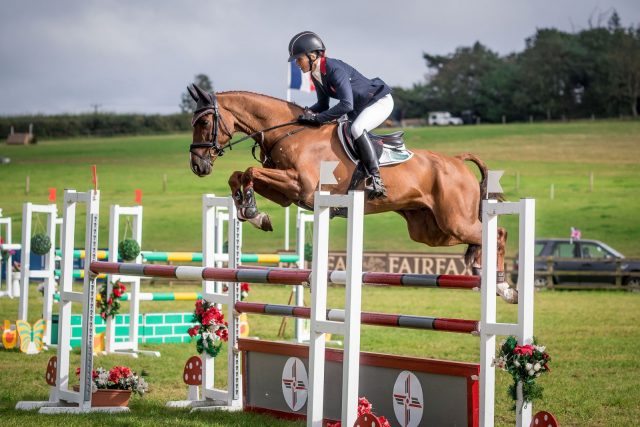 Though he be but little, he is fierce — and the scarcely 15.2hh Corouet certainly brings his own brand of ferocity to the table in droves, as Sarah Bullimore is quick to fondly tease him for.

“He’s an incredibly cocky little person,” she laughs of the homebred gelding, who’s out of her former five-star mare Lilly Corrinne. Though that cockiness has got him into trouble in the past — he clocked up 40 penalties in his CCI4*-L debut at Boekelo last year because, says Sarah, “he just thought he knew best and stopped listening!” — he’s learning, in his ninth year, to manage and channel it. After a cross-country round that saw him barely need any recovery time, Corouet came out and jumped his second fault-free trip of the weekend over a showjumping course that loomed over his tiny, pricked ears, earning himself third place in the process and setting him up well for a trip to beefy Bramham CCI4*-L next year.

Though Sarah has had to field many questions throughout the week about her plans for a 5* move-up, she remains pragmatic about Burnham Market’s job this weekend: though Corouet is now qualified, on paper, to tackle a 5*, a run at Bramham will give him more experience and ensure he isn’t overfaced by the colossal leap from this low-level four-star to the topmost echelon of the sport. 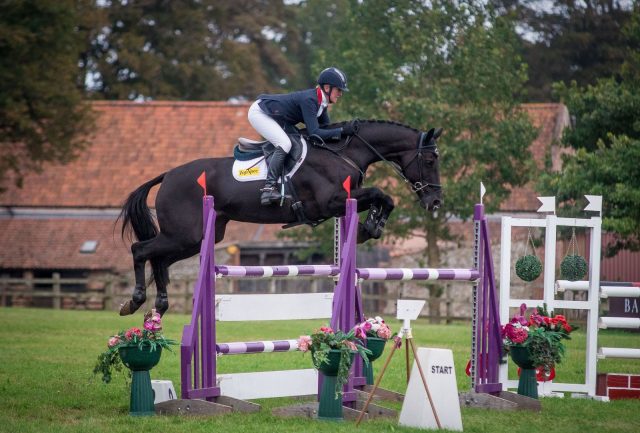 Nicola Wilson continued her streak of top form since returning from a broken neck, sustained in the middle of 2019. Both of her CCI4*-L entries — top horse Bulana and exciting up-and-comer JL Dublin, making his level debut — finished in the top ten, with the former taking fourth place and the latter dropping to tenth after tipping an expensive pole. Quite remarkably, given the relative enormity of Sue Peasley’s showjumping track, this makes JL Dublin the only horse in the top ten to add any faults at all. 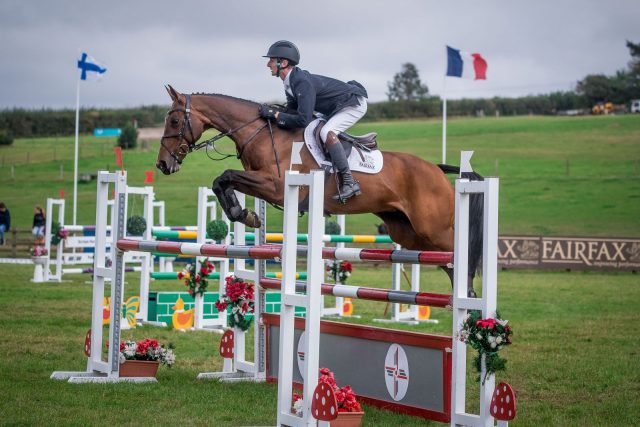 Tom Jackson and Billy Cuckoo proved impressive through the week in the 13-year-old mare’s first long-format since 2018, and Tom’s first since Tattersalls last May. Like the rest of the top nine, they added nothing to their dressage score through the week and finished fifth on a creditable 28.4 — a personal best for the mare, who had all of 2019 off due to injure.

“She’s been very good all weekend. I was very happy with her test, and then she did what she does and jumped a double-clear inside the time. That’s kind of her thing when we want her to do it,” says Tom of the mare, who he describes as “a little pocket-rocket — she’s small but amazing to ride, and very careful, which is a nice feeling on Sunday!”

This FOD means that the former Pippa Funnel ride Billy Cuckoo now has a faultless finish at long-format at every level from one-star to four-star. Now, Tom’s looking ahead to a 2021 Luhmühlen run to make it a full house. 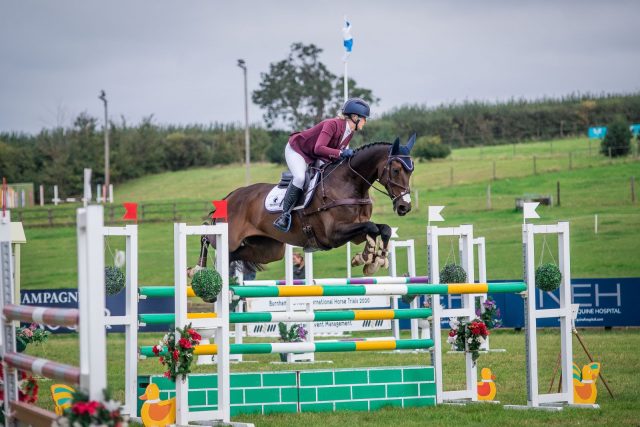 23-year-old Yasmin Ingham rounded out an exceptional week, in which she took the eight- and nine-year-old CCI4*-S with Banzai du Loir, by finishing in the top ten with both Sandman 7 (6th) and Rehy DJ (8th). Both horses jumped double-clears to finish on their dressage scores of 28.5 and 29.4, respectively, with the latter producing the fastest round of the day over Saturday’s cross-country track after a watch malfunction.

If this remarkable streak can continue for the young rider — and there’s no reason to expect that it won’t — we’ll surely see a Senior squad appearance on the cards before too long for the Isle of Man native who has won every British youth title in her career.

Just shy of 57% of competitors jumped fault-free rounds in this final phase making it, surprisingly, an easier ask than the CCI4*-S showjumping, which saw an equal split of 50% clears to 50% faulting rounds. Again, this dredged up the question of the week: is an ‘easy’ four-star a necessary addition to this unprecedented season, or could it have long-term ramifications if not used wisely as a stepping stone? We’ll be discussing this point, and several others, in tomorrow’s Reporter’s Notebook. Tune in for a mixed bag of musings and memories from a week in Burnham Market.

Until then — Go Eventing!