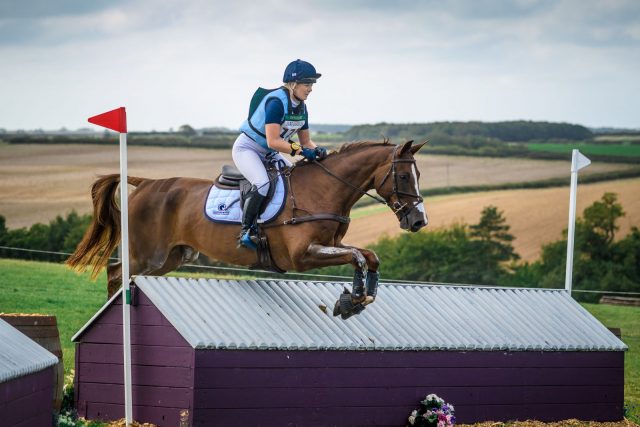 23-year-old Yasmin Ingham has added the prestigious eight- and nine-year-old CCI4*-S title, usually contested at Blenheim Palace but this week staged at Burnham Market, to her enviable list of accolades, finishing on her dressage score of 22.3 with the nine-year-old Banzai du Loir.

Much has been written in the past about the enormous influence of the eight- and nine-year-old CCI4*-S, and rightly so: since its inception in 2009, the class has been a scarily accurate predictor of future superstardom, with winners including Mark Todd‘s NZB Land Vision, William Fox-Pitt‘s Oslo, and Andrew Nicholson‘s Quimbo, who all went on to win five-stars within 12 months of their Blenheim victories, as well as Jonelle Price‘s 2018 Luhmühlen victor Faerie Dianimo, Chris Burton’s WEG mount Cooley Lands, and Laura Collett‘s Boekelo winner London 52. Running well here tends to foretell an illustrious career, but even more importantly, it’s an enormous educational stepping stone for horses at this pivotal age.

It’s only fitting, really, to see Yasmin take this much-heralded class — after all, she’s the only rider to have won every national youth title. As the reigning under-25 British champion and double Pony European gold medalist steps up to begin fighting for spots on Senior teams, it comes as no surprise to see her begin adding equine age classes to her tally, too.

After delivering two clear rounds inside the time across yesterday’s CCI4*-L cross-country track — including the fastest round of the day with Rehy DJ — she came into today’s final CCI4*-S brimming with well-deserved confidence. She also came fully-stocked with faith in the Selle Français gelding by Nouma d’Auzay, who was bought for her to ride last year by long-time owners Sue Davies and Janette Chinn.

“Honestly, he gives me goosebumps,” she told EN yesterday. “I feel so lucky to have secured him. He was on his way up and going, and so when I got him we could just crack on and go.”

But the process of getting to know one another was stymied by an injury that sidelined Yasmin for six weeks, turning her competition schedule on its head.

“I’d only done two events on him, and then I had my fall. [That meant] he didn’t get much of a season last year — we’d done a CCI3*-S at Burgham, and that was it. So this season, I just wanted to try to salvage it.”

She’s certainly done just that. Yasmin and Banzai du Loir quickly notched up two Intermediate victories when eventing recommenced in July, and then finished fourth in Aston-le-Walls’ eight- and nine-year-old Advanced class, his first run at the level. Last month, he stepped up to CCI4*-S at Burgham, adding just two time penalties to his 27.9 dressage and putting him firmly on the radar ahead of this week’s competition. 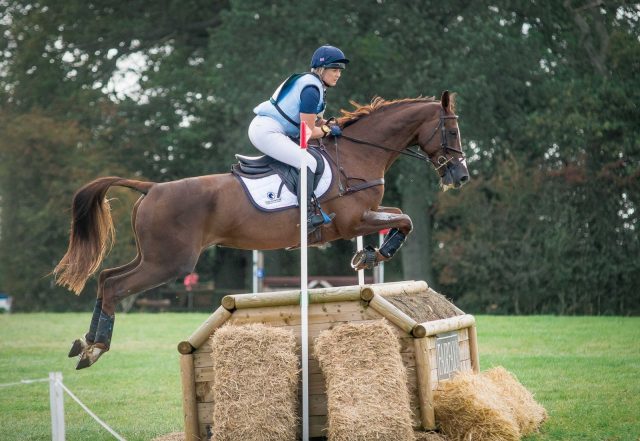 The first phase here set the pair’s week off to the best possible start when they scored a 22.3 — a career personal best for both the rider and the horse. Yesterday’s showjumping course — a proper track by anyone’s standards — was an equally easy affair, while today, Banzai du Loir tackled the cross-country course with aplomb, showing off a balance and confidence that belies his relative inexperience. For this reason, Yasmin found it easy to come home inside the time, putting the pressure on two-phase leaders Izzy Taylor and Hartacker, who would pick up a green, genuine 20 penalties to let Yasmin and Banzai du Loir take the win.

“I was probably a little bit down on my first minute markers, because they’re quite tight, but he covers the ground so well that when you get into an open stretch he makes it up,” says Yasmin. “When I came into the bottom field, I was about ten seconds up. He just found it so easy.”

Speaking to Yasmin, it’s impossible not to be caught up in her enthusiasm about the horse, who she hopes to produce with a long-term aim of consideration for the 2024 Paris Olympics.

“He’s so lovely. He’s a very sharp personality; he takes a lot of work and is very buzzy, with his eyes on everything — he always has to know what’s going on,” she enthuses. “He’s also very sassy — he’s got a huge personality, which I love. He’s uber-talented — it’s like he’s got ‘it’ in every phase, which is great, because you usually have ones that are awesome jumpers, or awesome on the flat, and he seems to be talented in all three, which is rare.

“We’ve worked a lot on his dressage over lockdown, because his changes were iffy. I went to Burgham off the back of a dressage lesson where the changes weren’t the best, but they came good there and they were good here, too. He’s a super jumper; he’s very quick and he covers a lot of ground. He’s not super strong but he’s very keen — he’s always taking me and looking for the flags, which is great.”

Yasmin’s excellent week at Burnham Market was topped off by finishing in the top ten on both her horses in the CCI4*-L — and even better, she was able to reunite with mum Lesley Ingham, who ordinarily accompanies her to every competition, for the first time in six months.

“She’s been stuck on the Isle of Man through lockdown, and I’m based in Cheshire, so it’s so great to see her again,” says Yasmin, laughing: “she can’t keep away [from events] — she loves them!”

Though it’s easy to bask in the glory of a successful week at an international, Yasmin is quick to credit her dream team of owners for the part they play in her remarkable career trajectory.

}I’m so lucky — Sue and Janette are so supportive and I really wouldn’t be here without them, so I’m so grateful,” she beams. 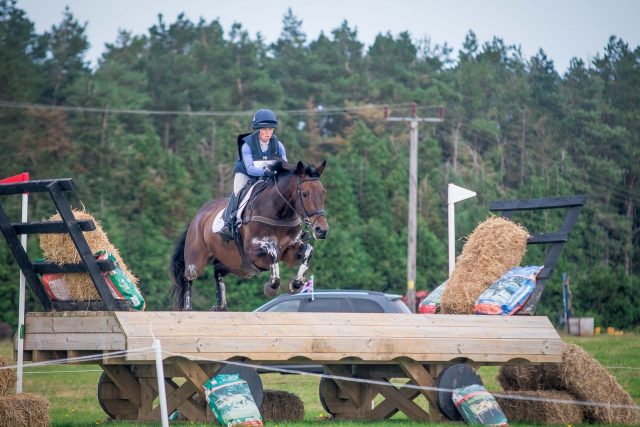 Reigning World Champion Ros Canter has been on flying form since returning from maternity leave at the tail end of 2019, and her momentum hasn’t eased up for a moment despite the tricky nature of this season — she clocked up a win in one of Burgham’s CCI4*-S sections, a top-five finish in Cornbury’s CCI3*-S, and today, she finished with two horses in the top five of the eight- and nine-year-old CCI4*-S.

Level debutante Lordships Graffalo, who was piloted by Tom McEwen to eighth place in last year’s Seven-Year-Old World Championship in Ros’s stead, finished second after adding 0.4 time penalties in each jumping phase to his first-phase score of 24.5, while Rehy Royal Diamond, who stepped up to the level at Burgham, finished fifth after coming home two seconds over the optimum time. 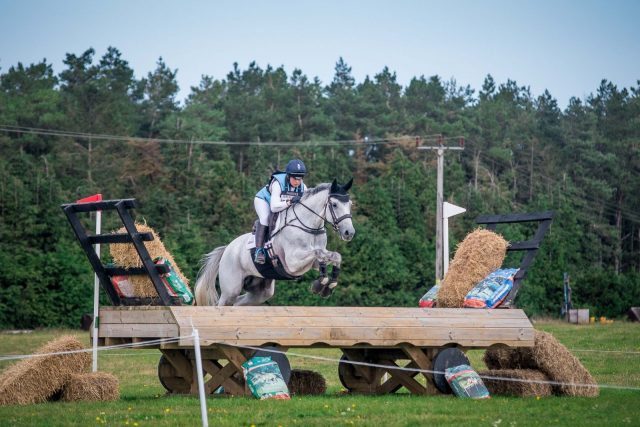 Kitty King‘s 2018 Six-Year-Old World Champion Cristal Fontaine made light work of his first CCI4*-S to finish third, adding just 0.4 of a time penalty in yesterday’s showjumping to his first-phase score of 25.7.

“I’m thrilled with him,” says Kitty. “He felt fabulous today and made it feel really easy — considering it’s his first four-star, to make it feel like that is lovely and really exciting for the future. He’s not the finished article yet — it’s exciting to know that there’s still more to come from him but he can be as competitive as he was.”

Cristal Fontaine has had a successful run of events since coming out of lockdown in July, winning two Open Intermediates and Aston-le-Walls’ eight- and nine-year-old Advanced. In finishing third here he adds his tenth top-ten finish to the eleven total internationals he’s contested, of which he’s won four. His consistency, says Kitty, largely comes down to the innate ease with which he tackles his job, as evidenced by his quick and straightforward run today.

“He’s always been a pretty quick horse, because he doesn’t pull and he doesn’t take much setting up,” she explains. “He’s speedy into and out of his fences because I don’t have to waste time saying ‘woah’ and getting him back on his hocks; he’s economical in that respect. He was inside the time easily enough without having to try, which is nice. I can’t really fault him on anything — I don’t think he’s been out of the top three since lockdown and he’s not had a fence down.” 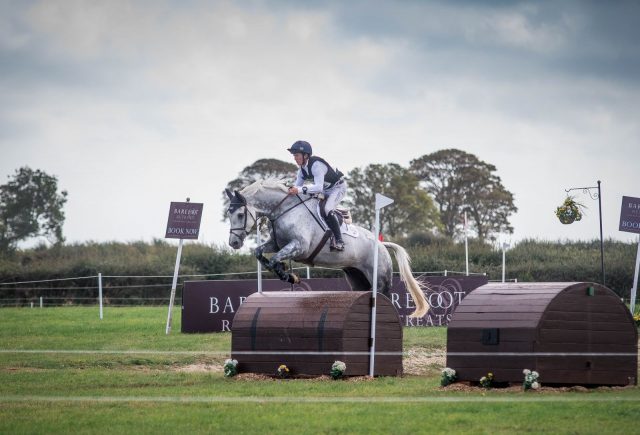 Tom McEwen piloted the former Paul Tapner ride Bob Chaplin to fourth place, adding 1.2 time penalties across the country to finish on 28. The pair made their debut together in the middle of last season after the nine-year-old German-bred gelding had 2018 off, following a second place finish in the Six-Year-Old World Championship at Le Lion d’Angers.

“We had a get-to-know-each-other year last season and this year’s obviously been a bit steady away, anyway, but this was always an aim for him,” says Tom. The time spent solidifying the partnership, though, has resulted in an easy rapport between the pair — helped along by the fact that the horse is simply a nice sort of chap to have around the yard.

“He’s amazing — the most chilled-out horse you could ever find,” says Tom. “He’s a lovely person, and he has more talent than anyone could ever shake a stick at, though sometimes he doesn’t tend to use it all.”

Want more Burnham Market? You’re in luck — we’ll be bringing you a full report on the feature CCI4*-L shortly!

The top ten in Burnham Market’s CCI4*-S for eight- and nine-year-olds.