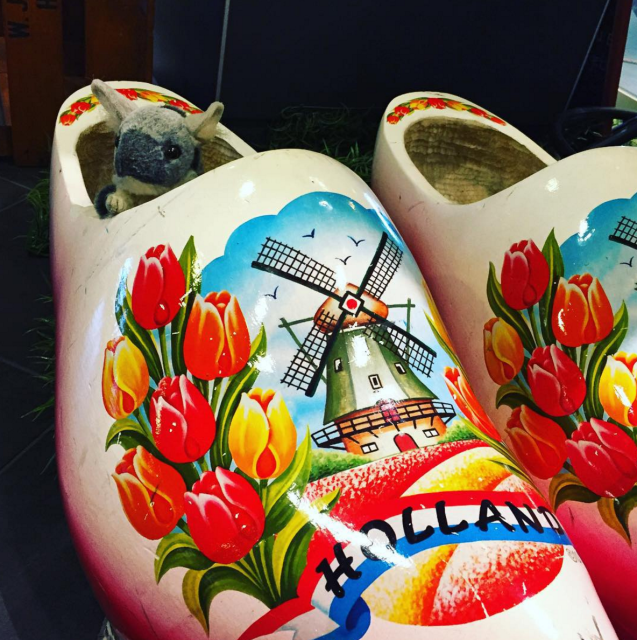 When in Boekelo, do as the Dutch do…? Photo by Leslie Wylie.

There’s been an awful lot of fuss about Boekelo this year, and for once, it’s not just because of the infamous parties (though what happens in Boekelo stays in Boekelo, to quote the enthusiastic – and trouble-making – DJ at Tuesday night’s bash). Instead, this year’s focus is on the Nations Cup competition…which it always is, obviously, but allow us to explain.

As the finale of the FEI Nations Cup series, Boekelo CCIO4*-L is always an exciting and climactic watch. This year, though, it offers a little extra excitement. There’s one team ticket for Tokyo left, and it will be awarded this weekend to the highest-placed unqualified team in the Nations Cup series rankings at the conclusion of the competition. But before we get to the exciting culmination of the competition, we’ll also be getting our first proper look at the new – and rather dramatically different – Olympic format, which we’ll see at Tokyo next year. 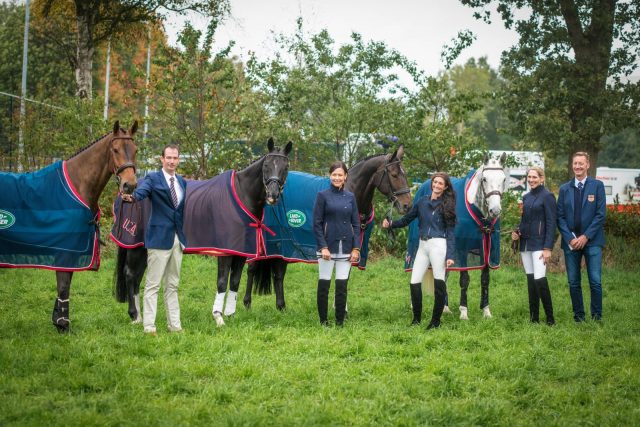 Under the new format, three riders will represent each team. Shown here are Team USA, represented by Tamie Smith, Jennie Brannigan, and Liz Halliday-Sharp, with Matt Flynn as the reserve. Photo by Tilly Berendt.

Let’s start by demystifying the format a little bit. The first thing you need to know is that the teams will be smaller – we’re used to seeing teams of four, with the three best scores counting, and one rider’s score dropped. In the new format, we won’t have drop scores at all anymore – instead, each team will have three riders, and each score will count.

Comprenez-vous? Great. But, we hear you asking, what happens if someone falls on cross-country, or doesn’t make it through a horse inspection, or comes up against one of the myriad other pitfalls that can crop up through an event? Without a drop score, do they just have to accept 1000 penalties for a non-completion and move on?

Nope. This is where the system really starts to look different, because for the first time ever, we’re now using a substitution system, which allows a reserve horse and rider to step in at any point in the competition.

That means that four horses and riders will travel to Tokyo for each nation, but one – the reserve or substitute pair – will not be accredited and won’t be able to compete unless they’re drafted in. What they do have to do, however, is pass both horse inspections. The team of three will be named ahead of time, and the reserve can be subbed in up to two hours before the start of dressage with no penalty to the team. The horse that was taken out can then wait in the wings as the new team reserve. After that? Get your calculators out, because it’s time to do some counting.

If all three combinations on the team complete each phase, nothing changes – they’ll each have their final score as usual, and those three scores will be combined to create the aggregate, or team, score. But if a rider fails to complete a phase, they’ll incur penalties for the non-completion. That works like this:

Once the elimination or retirement has occurred, there’s a couple of options. First, the horse and rider can be substituted, which means that those penalties they notched up as described above are kept on the team score card, while an extra 20 penalties is added on as penance for making the substitution. Then, whatever penalties the substitute earns are also added onto the score card.

Or, they can forego the substitute method, and the horse and rider that were eliminated or retired can continue on to the next phase with those non-completion penalties on their record. This isn’t always allowed, mind you – if the non-completion occurred because of lameness or injury to the horse, any sort of abusive or dangerous riding, a disqualification, or a horse fall, they are ineligible to continue. Likewise, substitution isn’t allowed in cases where abusive or dangerous riding or a disqualification has led to the non-completion of a phase.

Another important point to note is that only one substitution can be made per team, and that substitution must go to a new horse and rider – that is, a team rider can’t simply have a reserve horse waiting in the wings as a substitute. Any substitution made between the phases – let’s call these overnight substitutions – will still incur the 20 penalties for substitution, but won’t incur non-completion penalties. For example, if a team horse and rider complete cross-country, but the horse doesn’t look right the next morning, they can be replaced by the subs for just 20 penalties. They won’t add 200 penalties, because they completed the cross-country, and then won’t add 100 penalties, because they never started showjumping.

If a substitution can’t be made for any reason – because the sub has already been drafted in, or because of a disqualification, or simply the lack of a sub option – it can get expensive, and fast. If a rider is eliminated on cross-country for dangerous riding, for example, they’ll incur the 200 penalty ‘bonus,’ plus 100 penalties for failing to showjump, because they can’t be replaced.

(Oh, and another thing? Only horse-and-rider combinations who complete the entire competition are eligible for individual medals. Which is, you know, fair.)

In any case, any scores earned throughout the competition are kept on as part of the final team score, because drop scores no longer exist. So if a team member completes the dressage with, say, a score of 30, but then takes a spill across the country, they’ll have 230 points on their scorecard. If they then opt to sub in the reserve to showjump, they’ll add the substitution penalty – 20 points, so a total tally of 250 so far – and then the substitute’s showjumping score. Let’s say the sub knocks a rail – the final score is 254 for that slot on the team. If two riders fail to complete the cross-country, they’ll each add the 200, but because only one substitution can be made, they’ll need to decide whether one of them will still showjump the next day. If they can’t for any reason, they’ll add another 100 penalties.

If all this sounds incredibly confusing, we hear you – it’s a huge departure from what we know, and it all sounds pretty bonkers. These changes have been brought in to mitigate the confusion that surrounded drop scores – though we’re used to them, many new viewers of the sport found them difficult to understand, and so this system, it’s hoped, will prove clearer. It’s easy to make a snap judgment on what we’re seeing, but this week’s competition at Boekelo will offer some clarity – watching the system in action will, at the very least, help to demonstrate how it works, which is always easier than reading and re-reading the rule book until you go cross-eyed.

We’ll revisit these rules in a moment. Now, though, let’s discuss Tokyo tickets – there’s one left, and there are three teams chasing it. We’ve got twelve nations competing in the Nations Cup competition, and nine of them – Japan, France, Germany, Ireland, Great Britain, New Zealand, Australia, Sweden, and the USA – are already qualified for Tokyo. That leaves the Netherlands, Switzerland, and Belgium. They’ll all be competing for series points, as whichever of these three teams has the most at the end of the week will take the spot. So how are those points looking at the moment? 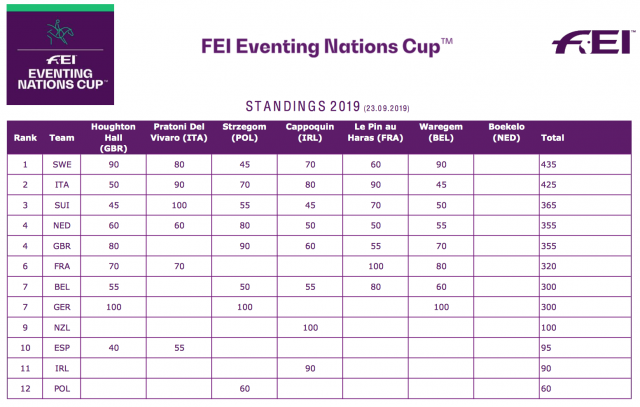 As you can see, Switzerland (365) leads the way by a slim margin of ten marks over the Netherlands (355), while Belgium languishes behind on 300 points. But that doesn’t rule them out – a win in the team competition here would earn them 100 points, while second would earn them 90, and so on. Here’s a look at the points that can be earned here:

If you’re about to do some ferocious scribbling to figure out where each team needs to finish to allow for any of them to qualify, don’t: only the best six scores of seven will count, which means that both Switzerland and the Netherlands will have an event to drop by the end of the week. Belgium, who missed Pratoni, will not.

It’s easy enough to consider this a bit of a match race between the Swiss and the Dutch teams – and here, the plot thickens. Both teams will be missing a major player, putting both of their campaigns in jeopardy. Switzerland’s MVP is Felix Vogg, whose top horse Colero is out of action at the moment. He will ride his other mount, Archie Rocks, at Pau – leaving Caroline Gerber, Robin Godel, and Tiziana Realini to fight the good fight in Boekelo on their European Championships mounts. They finished eighth there, with Tiziana as the drop score. 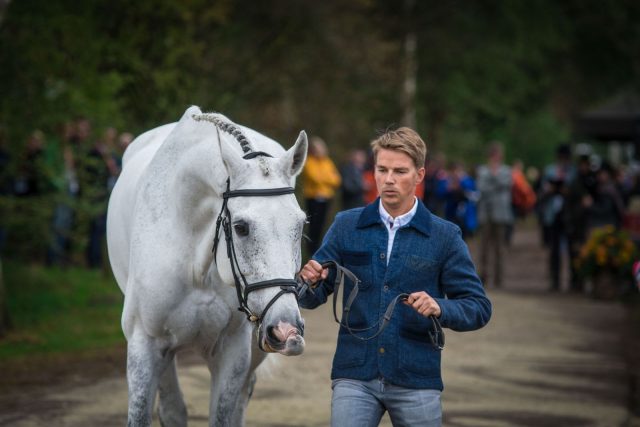 Tim Lips and Bayro at the first horse inspection. Photo by Tilly Berendt.

The lynchpin of the Dutch team should have been Tim Lips, who has twice been crowned the Dutch National Champion here with top horse Bayro (anyone else remember that sub-20 dressage last year?) Bayro went to the Europeans, and Tim doesn’t want to run him in a long-format again so soon, so he had planned to ride Eclips here instead – but after picking up a minor injury, Eclips has had to be withdrawn at the last minute. Instead, Tim has brought Bayro – but only to be used as a substitute, and only for showjumping. Tim won’t run him cross-country. This is big news for two reasons: one, because it throws a real spanner in the works for the home nation, and two, because it gives us a real-world chance to see how substitution works. (For what it’s worth, reserve riders here are allowed to compete in the entire competition normally – which could get complicated if they have their own falls or disqualifications – but at Tokyo, they’ll only compete if drafted in.)

The tension is certainly rising in all three camps as they fight for the final ticket – but is it the last chance saloon here? Not necessarily – but more on this next week, when we’ll bring you a comprehensive guide to composite teams.

In the meantime, Sweden – who qualified for Tokyo at the European Championships – will be hoping to take the series title. Their nearest challengers, Italy, don’t have a team here, but that doesn’t mean it’s a sure thing. A great result from the Swiss, the Dutch, or the British teams could send their campaign into a tailspin.

Today, we’ll see all the team riders complete their dressage test, so stay tuned for the day one dressage report, where we’ll take a closer look at the numbers thus far – and what needs to be done over the weekend.