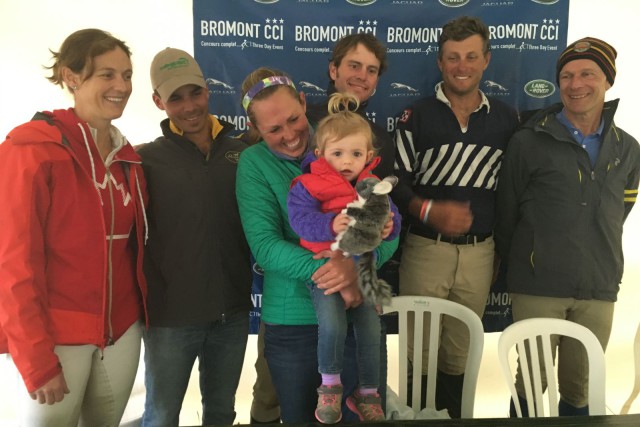 It was a great day of eventing at the Bromont CCI in Quebec, Canada. The CCI3*, CIC3*, CCI2* and CIC* all tackled Derek di Grazia’s big tracks under perfect cool conditions with immaculate footing. We had the top two for every division join us in a lively press conference at the end of the day. Here’s what the riders had to say.

Kylie Lyman, in her first attempt at a CCI3*, absolutely attacked the course today to bring both her horses home clear and inside the time to move into first and third place with Joan Nichols’ Lup the Loop and Cristin O’Hara’s Sacramento, respectively.

“My first thought was just to get the job done today. I also couldn’t help but wanting to be competitive, and I felt like we had done our homework beforehand. I felt like we were prepared to go out and do our jobs, and I didn’t want to be satisfied with just getting around. I wanted to go out and be competitive. I’m thrilled they both stepped up to the plate so well. They helped me out a couple times. They could not have been better,” Kylie said.

“They both have completely different attitudes, but both are big, galloping horses and I can get in trouble with their strides getting too open and too long. I have to make sure I get them back in the combinations and not get overzealous. ‘Loopy’ is lazy and hard to get motivated whereas ‘Jackson’ (Sacramento), shows up to work every single day and he’s an overachiever. They tend to both go about their business as soon as they leave the startbox. They’re pretty dependable that way and I couldn’t ask for two better horses to do my first CCI3* on. It’s taken a while to get here but I’m happy with what I had today. It was worth waiting for.”

Ryan Wood was double-clear on his and Curran Simpson’s Woodstock Bennett to move up from sixth to second place. Ryan has been partnered with the 9-year-old since the gelding was four and has brought him to Bromont to compete in the CCI*, CCI2* and now his first CCI3*. “He was pretty awesome out there. He saved me a couple times but he was on the job looking to go between the flags. I was thinking leaving the start box that it’s a long way for his owners to have come for me not to get around. I’m glad it all came together.” 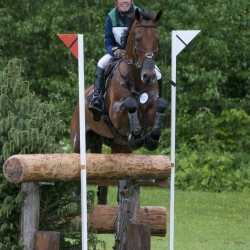 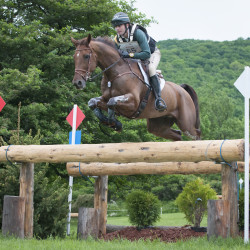 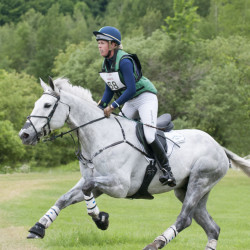 Ryan and his and Steve and Karri Guy’s Frankie crossed the finish line just one second over the time to move into the lead from sixth place. This is one of the first horses Ryan bought after moving to America from Australia. He found Frankie, now 12, as a “wild and woolly” 5-year-old that had won no small amount of money on the racetrack. He negotiated to buy him for $500 and a couple of free jump lessons.

“He was really awesome. It was one of the best cross country rounds I’ve had in a long time. He was coming off Kentucky where we had a fall at the water early on, so he’s pretty seasoned to be prepared for Kentucky. So he had a week off after that, then we ramped him back up for this. He felt like he was on target today. He’s a little Thoroughbred that looks pretty unassuming without tack on. He’s got a big heart.”

In second place, Colleen Loach is the top placed Canadian after cross country with Peter Barry’s Qorry Blue D’Argouges. “I think it’s pretty cool that they’re starting (the Canadian Championship) and especially that it’s in our hometown. I’m thrilled to be top Canadian in it (after cross country). I think it’s a good step towards increasing eventing in Canada. I was thrilled with my ride today. My horse was amazing. He didn’t put a foot wrong. He’s just so consistent and he really is a pleasure to ride.” 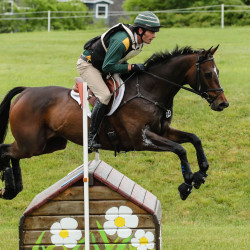 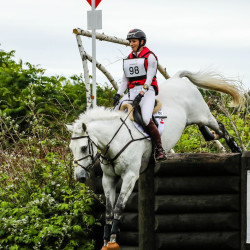 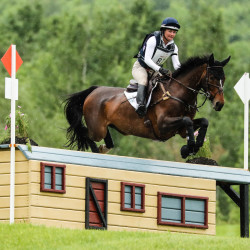 Boyd Martin is rooming at Peter Barry’s home nearby for the event, and Peter joked “No more!” after Boyd took the lead with Christine Turner’s Tsetserleg over Peter and his own Long Island T, who were the leaders after dressage. The scores are still very close, however, with only half a point separating the first and second place. Boyd also moved into third with Bonito, owned by Nancy Hathaway and Steve Blauner, after his double clear round.

“Tsetserleg is a new ride for me thanks to Chris Turner from Texas. He was formerly trained and produced by Michael Pollard,” Boyd said. “Michael’s done a wonderful job producing him so I didn’t have to do much except ride him around. He knew his stuff. Bonito is a little bit greener. They’re both very talented horses. I wanted to bring them up here because I feel like this event is a real test and you know if you can get around the two-star here you should have a 3*/4* horse.

“I haven’t gone fast on them before because I wasn’t quite sure of them. Bonito’s a bit of a wild man so I spent the horse trials just trying to get his rideability. Here there is a nice bit of open gallops and whenever I go to a CCI I go for it. I look at the CICs and horse trials as more training events. When you get to this one you have to cut them loose and have a crack at it.”

“Unfortunately, he did!” Peter laughed.

“I wanted to make the time but I didn’t make the time because it takes me longer than it should to set Ludwig up. He’s a little bit keen and he takes a little bit over,” Peter said. “I think it’s a treat for horses coming here and I think more horses should come here to Bromont. It’s such a nice event. It’s an education. There’s a lot of land, there’s a lot of galloping. It’s a wonderful course I find for young horses and as Boyd said when you do well at this level here you’re probably ready to go up to the next level. But the horses come out of it happy, ears pricked.” 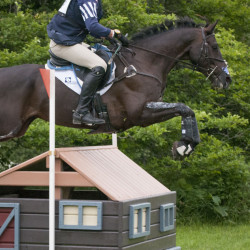 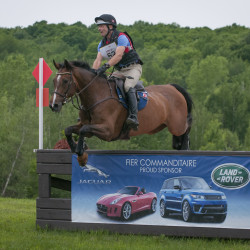 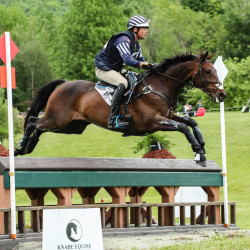 Erin Sylvester told us yesterday that she expected Jill Tallman’s 7-year-old Mister Optimistic to ride green around the CCI* track, but they produced a double clear round to move into the lead in the horse’s first CCI*.

“He definitely started out green. I rode very supportive in the first bit and really made sure I confirmed every fence. Once he got through the coffin he felt very good. He gave me the hardest spook at the table at number three, but he got better as he went around and I was really pleased with the way he came home. I didn’t know how easy he was going to be to get fit so I made him fitter than I normally would for our one-star horses and it definitely paid off. He was full of run at the end of the course.”

Erin also had her longtime partner Mettraise competing in the CCI3*. She produced one of only five double clear rounds in the division to move up from 19th to eighth. Erin said “Missy” has had a tough spring dealing with a popped splint.

“She’s such a cool horse. She gives me so much heart on the cross country. She really tried out there. I think in the middle of the course she felt tired and somehow on the back stretch down at the double corners she woke up with a second wind and was a beast for the rest of the course. She loves cross country and is so smart. She’s a pleasure to ride.”

Erin wanted to be sure and mention her three students who had great days in the CCI* and are, she says, just as important as her horses: Kaelen Speck with Sweet Rebellion, Annelise Aurillo with Rasher and Gabrielle Ciccone with Poetic Justice all produced clear rounds today.

Dom Schramm is second after cross country on the Giesselman family’s Bolytair B, a horse who has made a tremendous recovery from colic surgery this winter.

“This is probably the first time I’ve ever really let him have a run and let him go. He’s quite a big horse and a lot of warmblood. I’ve felt like he’s had a bit of a motor but not really gotten to test it out yet and I was thrilled. I could barely hold him. He was very brave, really bold and he had a resting heart rate of only 95 when I got done.”

“I’ve taken (his fitness) really seriously and to be honest I was pleasantly surprised at the end but also at the six minute mark thinking we may have done a bit more than we needed to do. It’s a good problem to have.” 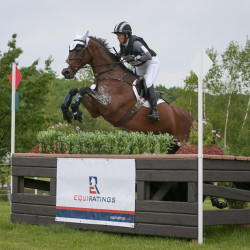 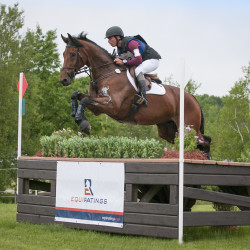 Dom Schramm and Bolytair B. Photo by Leslie Threlkeld. 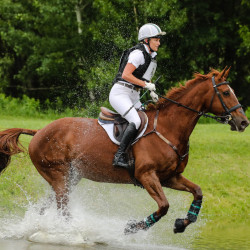 Thoughts on the Course

“Derek is the master at building questions that encourage positive riding and being able to hold your line,” Ryan said. “The terrain is pretty tough here. You’ve got up and down and around, the jumps are big and bold, but the horses finish and feel awesome. It’s really great to ride around his courses and finish and feel like you’re ready to go on to the next step. I think if there was a way to make it compulsory for course builders to spend some time with him that would be a way to go. He’s just brilliant.”

Boyd (and many others) have said, “The footing was super. It’s the best I’ve ever ridden at Bromont.”

“The course was a typical Derek course. You walk it and it seems fairly obvious what he wants you to do but there’s these little nuances you have to try to plan for,” Dom said. “It’s never a bad day to ride around one of Derek’s courses, and I think if you had a great day you can feel good about the work you’ve done, and if you’ve had a rough day you’re going to learn from it.”

The final horse inspection gets underway bright and early tomorrow followed by show jumping beginning at 10. Check in tomorrow to see how it all pans out!