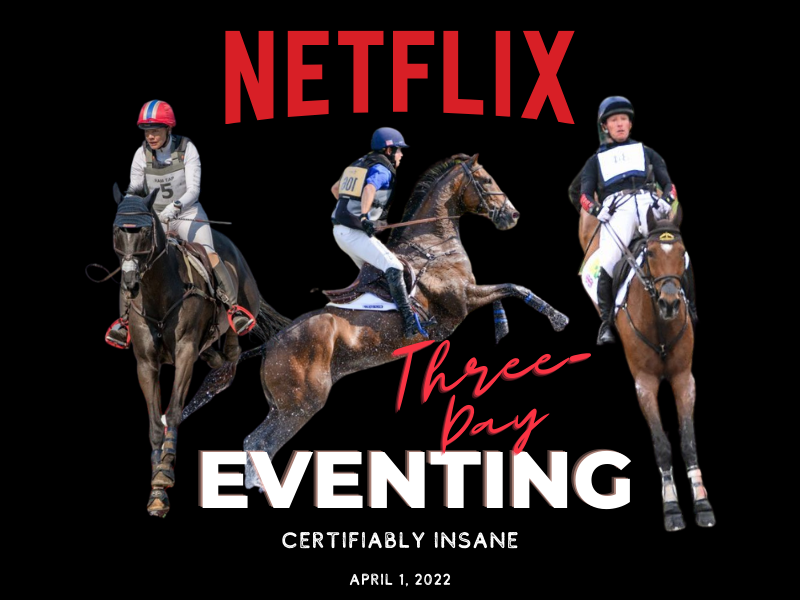 Hot on the heels of the monumental success of the Netflix series, Formula 1: Drive to Survive, producers have announced a new show following top eventers for the series Three Day Eventing: Certifiably Insane. The goal of the show is to introduce the sport to new viewers, but in order to appeal to the masses some format changes may be tested, sources close to production say.

“We’re probably going to insist that all dressage tests be done to electronic music like that one guy did at the Olympics,” one producer said. “It’ll just add to the universal appeal, especially if we can hire DJ Snake to do some live mixing during competitions.”

Netflix producers are also cognizant of the safety risks posed by eventing, and they want to ensure that the horses are well looked after during filming. For that reason, all competitions hosted for filming will replace their fences with inflatable jumps for a reduced risk. When asked about damaging the integrity and history of the sport, the producer shrugged. “I think we know how to make a sport look cool,” she said.

Sticking to the tried-and-true method of following prominent teams during the year’s circuit, Certifiably Insane plans to follow Oliver Townend (“that guy’s won a lot, hasn’t he?” they asked during research), Phillip Dutton (“well, he didn’t talk much in our interview but they say he rides OK so we can improvise”), and Tamie Smith (“she seems cool enough to balance out the male energy”) for its first season. The show will also open up for auditions for anyone else interested in being featured; “the more off the rails, the better!” the producer said.

Netflix has also implied that it has some follow-up equestrian shows in the works, should Certifiably Insane take off in the same way Drive to Survive has. Working titles include “Dressage: That Musical Horse Stuff”, “Roping: Yee-Yee and Yee-Haw”, and “Combined Driving: They’re All Crazy Too”.

Note to readers: Don’t believe everything you read on the internet, even when it comes from your favorite eventing news source! Happy April 1.