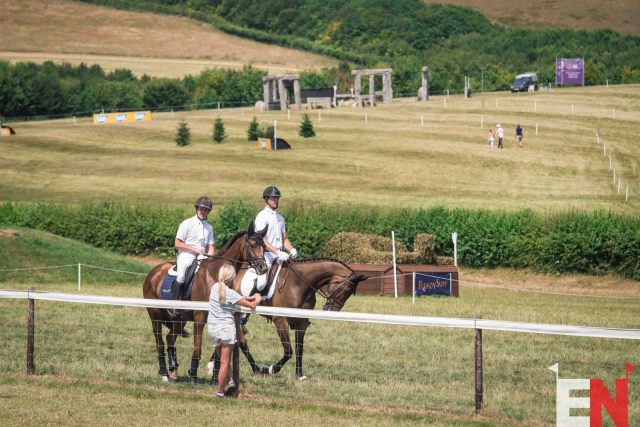 The St James’ Place Barbury Horse Trials CIC3* is hot. In every sense of the word. In the middle of (apparently) sub-Saharan Wiltshire, the popular event attracts some of the world’s biggest names — and their celebrity-status horses — while the mercury reliably rises until the venue is awash with spectators, draped woozily over the viewing banks like Salvador Dali’s overcooked brainfarts. Perhaps that doesn’t make it sound quite as undeniably delightful as it is — but it really, really is. Artfully placed in a natural amphitheatre in the rolling countryside, its criss-crossing course can be viewed in full from any spot (including, as it happens, the bar), and the entire event fairly beams in the sunshine. It’s English summer at its finest and rarest, and it never disappoints. 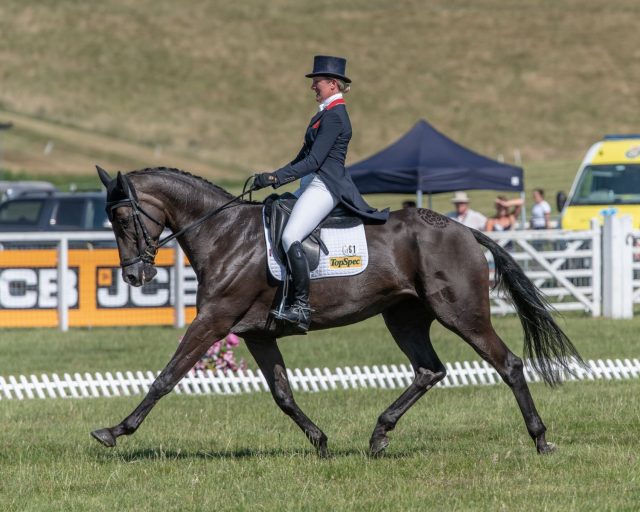 Nicola Wilson and Bulana hold onto their first-day lead. Photo by William Carey.

Today, as Novice competitors on course created a vibrant and ever-changing backdrop, the CIC3* dressage came to its conclusion in the main arena. Leading the way by the tiniest margin of 0.1 penalties are Great Britain’s Nicola Wilson and her WEG long-listed mare Bulana, on 25.2. The talented 12-year-old finished second at Luhmühlen in 2017, before claiming individual bronze at the Strzegom Europeans, but their spring season has been slightly less consistent: the pair finished 16th at Houghton CIC3*, before leading after the first two phases in Bramham’s CIC3*. They then withdrew before cross country in preparation for Luhmühlen CCI4*, where the historically strong horse picked up 40 penalties before Wilson opted to retire on course. This weekend’s result will be crucial for their team selection chances — a top placing would make them a formidable option for Great Britain. 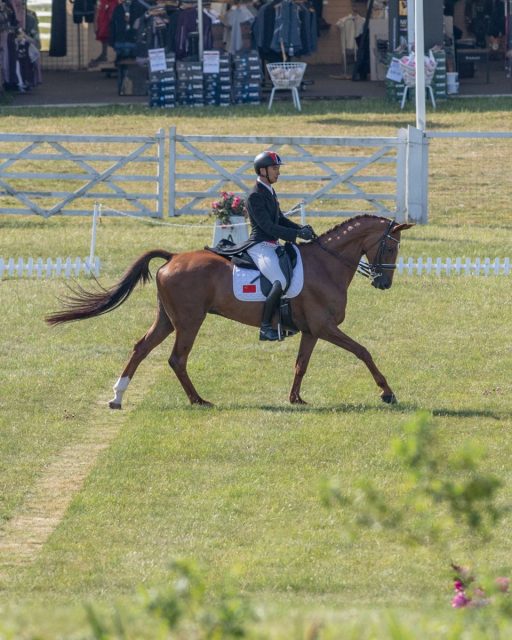 Narrowly behind them is China’s Alex Hua Tian, who rides top horse Don Geniro. ‘The Don’ produced a 25.3 after a settled and accurate test, devoid of some of the tension that has earned him the joking moniker of ‘Psycho Don’ in the past. This is to be his second international of 2018 — his first, in Tattersalls CCI3* in May, ended with a retirement on cross country day, but he’s finished in the top 20 here before. 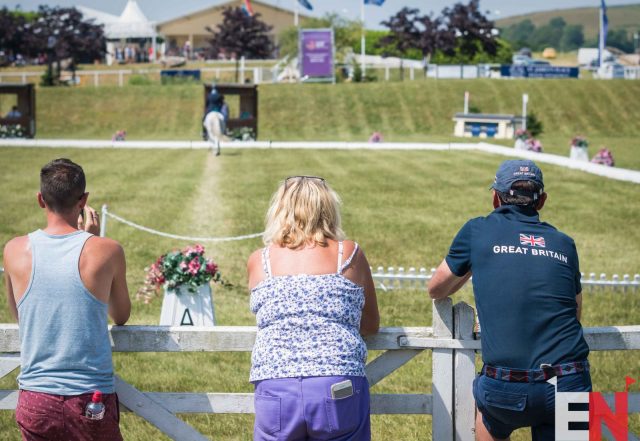 William Fox-Pitt and Fernhill Pimms sit comfortably in third place going into the jumping phases on a score of 26.4. The 14-year-old gelding, one of Fox-Pitt’s ‘classic’ string, has had an early season of mixed fortunes: he failed to complete Badminton earlier this year, but then went on to finish 4th in Chatsworth’s CIC3*. His Bramham was somewhat less successful — a missed flag dropped the pair right out of contention, and they finished 48th despite an otherwise impressive performance — but Fox-Pitt won this class last year aboard Clifton Signature, poignantly marking his return to form after his serious head injury in 2015, and a return to the top of the leaderboard would be a boon for his stalwart campaigner. 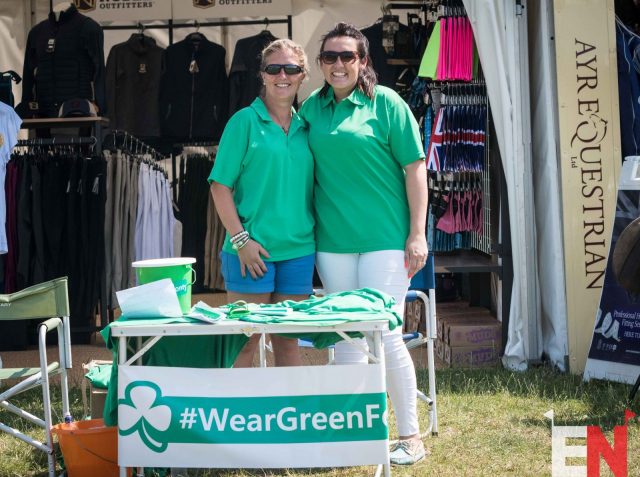 Our turbulent sport is often defined by its heady mix of ups, downs, and emotional comebacks, and as the action unfolds, Jonty Evans is never far from anyone’s mind. Though it might create a logistical nightmare for stewards and fence judges alike, it’s been a heartening sight to spot a sea of green in the crowd and across the course, as the community embraces the #WearGreenForJonty campaign. The campaign doesn’t just aim to show support as Evans recovers from a head injury sustained at Tattersalls, it’s also raising funds for the David Foster Injured Riders’ Fund, which offers funding and support after debilitating accidents. If you’re on site at Barbury, you can pick up a wristband, car sticker, polo top, or belt from Eventing Worldwide’s table by the main arena, or you can show your support online.

Are you ready for Leg 4 Barbury? Series Leader Laura Collett is! 💪🏻Tune in from 09.35am BST Saturday 8th July LIVE and for FREE on www.eventridermasters.tv 🙌🏻

The weather isn’t the only thing heating up this weekend. Tomorrow brings us day one of the fourth leg of the Event Rider Masters series, with a suitably star-studded line-up competing for valuable points toward a spot on the final podium. Current series leader Laura Collett returns with Dacapo to defend her position, and last years’ winners Tom Carlile and Upsilon go head to head with Oliver Townend and Cilnabradden Evo. Each will be looking to add a third ERM win to their tally. Elsewhere in the line-up, stalwart superstars Happy Times, ridden by Sam Griffiths, Bay My Hero, ridden by William Fox-Pitt, and One Two Many, ridden by Nicola Wilson, prepare to challenge for a place atop the leaderboard. We’re excited to cheer on our two U.S. representatives, too — Liz Halliday-Sharp brings forward Fernhill by Night, while Tiana Coudray rides Under the Clocks, with whom she scooped seventh place in the CIC3* here last year.

The ERM dressage kicks off at 10.07am BST/5.07am EST, with all of the action livestreamed on the Event Rider Masters website as well as on their Facebook page. There are plenty of opportunities to get involved, too — make sure you download the SAP Judging and Stacks apps to play along, make predictions, and compete for fantastic prizes as the competition unfolds. Need any more mental preparation? Check out this whirlwind preview of all the excitement yet to come….

Beautiful Barbury ✨Where will you be watching?www.eventridermasters.tv

We’ll be back with all the latest from the St James’ Place Barbury Horse Trials tomorrow — in the meantime, Go Eventing!

The top ten after dressage in Barbury’s CIC3*.