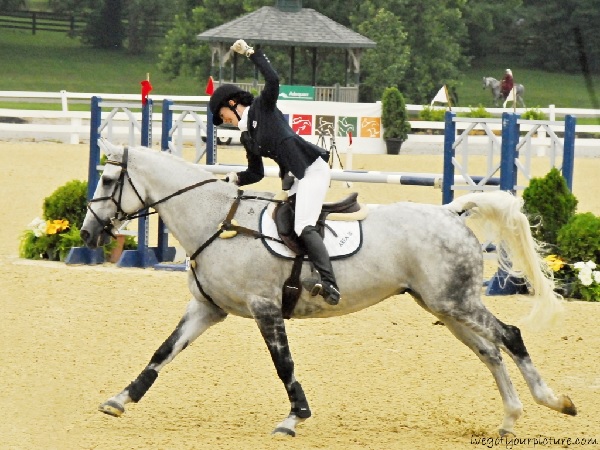 Nicole Doolittle and Tops celebrating their CCI* win at NAJYRC in 2013. Photo courtesy of Ivegotyourpicture.com.

Nicole Doolittle triumphed last year in the CCI* division at NAJYRC in 2013 aboard her partner, Tops. This year, Nicole returned to Kentucky to contest the CCI2* division, a level that was relatively new for her. Nicole ended the weekend in the top 10 of the CCI2* and returned home armed with homework and a plan of attack for 2015.

Nicole and Tops began their partnership in 2013, taking over the ride from Danielle Ditching, who had taken the Irish Sport Horse gelding around the Advanced level previously. “I’ve been good friends with Dani for awhile now,” Nicole said. “I’ve had the pleasure of watching her and Tops be successful together. She was looking for a new ride, and she called me. It ended up being good timing because my mare had an injury and I was also looking for a new mount.”

“He was exactly what I wanted; I wanted to be able to do a one-star and move up to Intermediate down the road. It was a great match, and we have matching personalities so we get along very well.”

Nicole and Tops qualified for NAJYRC, representing Area III, in 2013 and made quick work of the CCI* division, winning on their dressage score of 48.1. “I had been going Prelim for two years going into last year, so I felt pretty confident. Coming up to the Intermediate this year, I felt like we were ready for it. I did three CIC2* with him before Young Riders, so it was my first CCI2*. Coming in, I knew it would be more technical and longer; and I had definitely noticed a difference in fitness with the move up.”

Nicole earned a 53.9 in the dressage, which was good for third place going into cross country. “I was really pleased with the flat. We’d been working very hard on jumping and dressage, but around the 8 minute mark on cross country, both he and I were feeling it. It was a bit nervewracking to be honest. But he jumped beautifully and never lost his form.”

“We got to the Head of the Lake, and I didn’t give him the best ride coming in. We just didn’t have enough momentum, and so it was either chip in and have a very interesting ride in or pick up a runout, and he was smart and knew he couldn’t make it work. It was definitely a bit of a rider error, we just needed to come more forward.”

The pair went on to finish in 10th overall after knocking two rails in show jumping the next day, and Area II clinched the team gold for the weekend. Nicole was pleased with her weekend but is already looking forward to next year. “I’m definitely going to be more proactive with fitness in getting ready for next year. He’ll get a well-deserved break for now, but we usually start back up in January, and this year I’m thinking we will get going later in the fall so we have a few more months to work on everything. By next year, we’ll be ready to go.”

Nicole had a great experience riding in a team environment for a second year. “This year, we had a lot of newer people than last year. At the two-star level, quite a few of us were newer to the level, so we definitely knew our strengths and our weaknesses. I feel like there was a bit more pressure this year since we were newer, and we all knew our risks as riders.“

“The team atmosphere is great. (Coach Kyle Carter) does a fantastic job with us, and there’s a lot of great communication and respect. It was great to be able to experience it, and I can’t wait to build on that next year.”