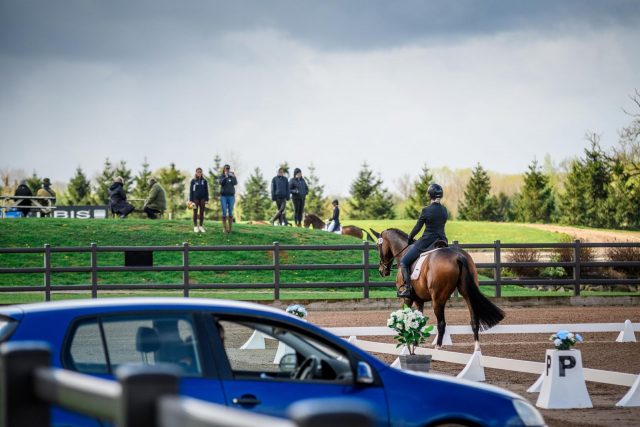 Behind closed doors but no less buzzy for it, Aston-le-Walls has set the stage for a useful spring four-star this season. Photo by Tilly Berendt.

Saying goodbye to our beloved events — for a year, perhaps, or two — is beginning to feel worryingly par for the course after more than a year of battling the Covid-19 pandemic, but every once in a while, we get the rather more soul-soothing experience of welcoming a new entry on the fixture list. We saw that last year in the UK with the advent of Cornbury International, a long-defunct event under new and enthusiastic stewardship, and similarly last week, when Cirencester Park returned to the calendar to much praise. This week’s focus, though, takes us to a place that’s as comfortable to and well-loved by British-based eventers as a pair of favourite old gloves – but this time, it wears a new and illustrious hat.

The home base of British team selector, coach, and former top-level competitor Nigel Taylor and his wife Ann, Aston-le-Walls Horse Trials hosts a number of events each season, giving competitors from BE80 (US Beginner Novice) through Advanced the chance to gain valuable experience over encouraging tracks. Its location – on the cusp of England’s Midlands – and proximity to the motorway system make it an easy event to get to for competitors up and down the country, who turn out in their droves to make use of the rare chance to perform two phases on an all-weather surface, and it’s a firm favourite for young horses to step up a level safely and comfortably. And when the calendar of events needs a little help? It’s not at all uncommon to see Aston step up to bat with a last-minute additional competition, ensuring no one misses out on the runs they need. But for a while now, Nigel’s been dreaming of doing something more. It was time for Aston to go international.

As is fitting for the event that so often fills in the gaps left by cancellations, its debut CCI4*-S effort this week comes as another Herculean gesture. The iconic and much-loved international at Chatsworth was an early victim of this year’s spate of cancellations, and while nothing can quite replace the thrill of cocktail parties in the Painted Hall and fast and furious cross-country runs around Queen Mary’s Bower, competitors found themselves in desperate need of a serious track to help them prepare their horses for long formats to come (or we hope so, anyway). Nigel, who brings a wealth of experience to the table, knew that Aston could expand its repertoire to cope with the demands of international competition – after all, it had done so before when hosting the CCI3* European Championships, colloquially known as the Rural Riders’ Championships, in 2011. This, though, would be next level in every way.

It would appear that no one has doubted the Taylors’ ability to get the job done: there are more than 220 entries across the two CCI4*-S sections, both of which are sponsored by Dassett Eventing, and those entries boast some of the very best horses and riders in Britain. Conscripted for duty is Captain Mark Phillips who, with Nigel, has produced an expansive new track, featuring 800m of previously unused land and an exciting loop through the main arena, giving the familiar a cosmopolitan new facelift. We’ll be taking a closer look at their efforts tomorrow – but for now, we’ll turn our attention to the first day of dressage. 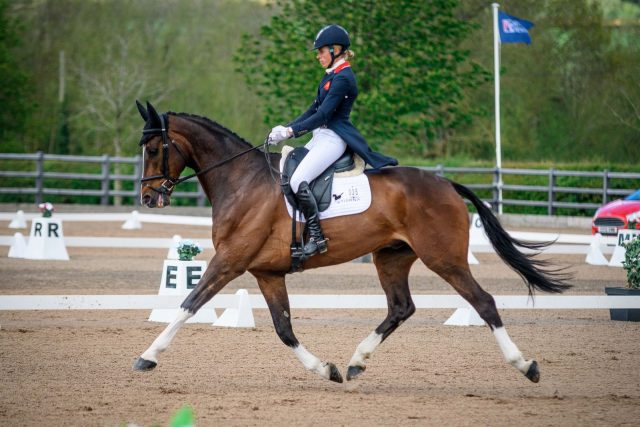 Izzy Taylor and Monkeying Around lead CCI4*-S Section A. Photo by Tilly Berendt.

It’ll come as no surprise to avid viewers of the sport two see a couple of familiar faces at the top of the leaderboard (unless, of course, you’re new here, in which case, let me give you a brief overview: Piggy March is quite good and we all whinge about the weather a lot). Izzy Taylor finds herself once again at the top of the leaderboard with Monkeying Around, her 2017 Six-Year-Old World Champion who has gone from (considerable) strength to strength in this phase.

The now-ten-year-old Hanoverian gelding wasn’t immune to the ferocious winds and ever-changing conditions that made the majority of the field snort, spook and skitter their way around the two arenas, but he showed off an increasingly reliable level of maturity by kindly saving all his dance moves for the warm-up ring. In his test, and under the watchful eye of British team head honchos Chris Bartle and Dickie Waygood, he was all poise and professionalism, and it’s a joy to see how Izzy’s careful production of the horse has married so well with his innate sense of balance and extravagance to create a bold, confident performer who’s able to shelve all conservatism and really squeeze every last drop out of each movement. Their test earned them a 22.5, giving them a considerable lead over second-placed Piggy March and Brookfield Inocent, who put a 25.8 on the board. (Still here, newbies? That’s a very, very good score for any mere mortal but rather a lower one than we’ve seen in the past from this exceptional gelding, who was second on his five-star debut at Pau last year. See, we told you she was good.) 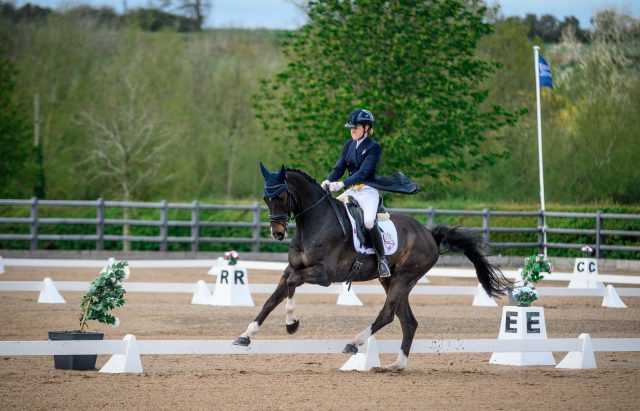 A fresh and flamboyant Charly van ter Heiden sits in third place with Mollie Summerland, who has the rare accolade of being possibly the only eventer in the world who, if forced to migrate to another discipline, would happily choose dressage. But that unusual (and, look, if we’re honest, weird) penchant for performing between the boards is always evident in how she pieces together a test, particularly when aboard her self-produced top horse, who dressage legend Carl Hester has dubbed as having the quality to win at the upper echelons of that sport, too.

When natural panache meets hard work and a healthy dose of perfectionism – both evident qualities of Mollie’s – the result is always a treat to watch, and her commitment to accuracy and positive riding channeled Charly’s exuberance admirably. So much so that Ireland’s European bronze medallist Cathal Daniels stopped to graze his own top horse, the indomitable Rioghan Rua, nearby, “so she can watch and learn how to trot like that,” he quipped. Mollie and Charly posted a 26.1, which sees them sit just a whisper ahead of fourth-placed Izzy Taylor and her new-old ride Fonbherna Lancer, who joined Piggy March’s string last season but moved back to Izzy after a fifth-place finish Burnham Market a fortnight ago so that he can head to his debut five-star at Luhmühlen next month, a level for which he’s qualified in tandem with Izzy but not Piggy.

Rounding out the top ten in this battle of British women is Yasmin Ingham, who sits provisionally fifth on 26.7 aboard Rehy DJ, her partner when winning 2018’s national under-21 title.

The top ten at the end of the first day of dressage in Section A. 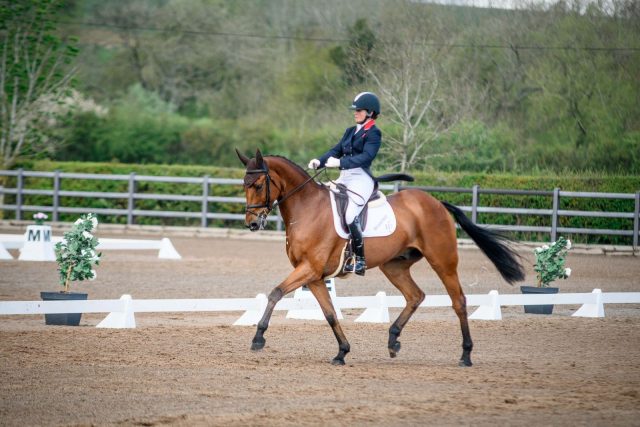 In Section A, you needed to score sub-30 if you wanted a spot in the top ten – but in Section B, the first fifteen places all broke that 30 barrier, proving just how tough a competition this is set to be. Leading the way in this class is – no prizes for guessing, folks – Piggy March, who piloted Brookfield Quality to a remarkable 21.7. Though he sometimes sits in the shadow cast by his headline-stealing stablemate Brookfield Inocent, Brookfield Quality — known at home as ‘Nervous Norris’ — has already got the sort of record most of us would commit a few crimes for: in 2019, he won all four of his international starts with Piggy in their first season together after he was produced to CCI3*-L by Australia’s Kevin McNab. This is just his third CCI4*-S; he won his second, a season-closer at Little Downham last year. Today’s performance marks a significant career personal best at any international level – an achievement notched partly on the strength of the changes, which looked considerably more established than we saw last year. (Just to recap, yeah? Piggy March = good.) 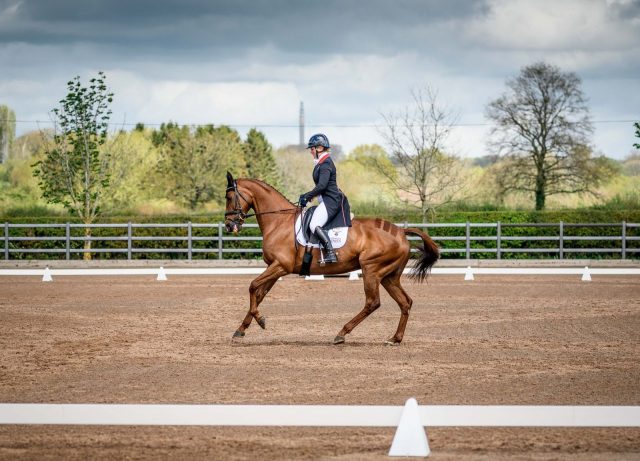 It was a welcome return to competition for Gemma Tattersall‘s Jalapeno, the spicy former Karin Donckers ride who we last saw at Pau CCI5* in 2019, where she was withdrawn overnight following cross-country. (Spare a thought for the poor mare, who has probably spent much of her day wondering why on earth everyone’s standing several meters apart and wearing bits of fabric on their faces.) The pair earned a 23.6 in the ring, proving that they’re ready to pick up where they left off after their one and only season together in 2019. Then, we saw them finish second at an achingly tough Bramham CCI4*-L, win the Event Rider Masters finale at Lignieres, and nab a top-ten finish at Chatsworth  – but they’ll be aiming to leave the odd 20 penalties, picked up at Pau, Aachen, and Millstreet, well behind them.

Yasmin Ingham makes her second appearance in a top ten today, this time sitting third provisionally on 25.4 with Sandman 7, whom she inherited from Pippa Funnell in 2018 and with whom she became the British under-25 champion in 2019. Though the gelding has a wealth of experience, he’s not generally Yasmin’s most obvious first-phase performer, and this great score matches his career personal best, notched up with Pippa at Chatsworth in 2018.

Fourth place is the overnight domain of Toby Pigott — the only male rider to get a look-in in either of the top fives — who scored a 25.5 with the exceptionally named four-star debutant Lance A Little, while fifth place goes the way of Kirsty Chabert (neé Johnson) with Opposition Loire on 25.6.

We’ll be chatting to some of our leaderboard hoppers tomorrow, when they’ll face stiff competition from the next batch (horde? Horde.) of competitors. In the meantime, enjoy some snaps from today’s action and, as always, Go Eventing! 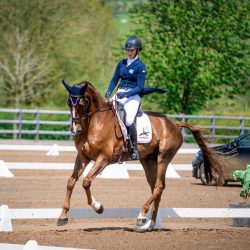 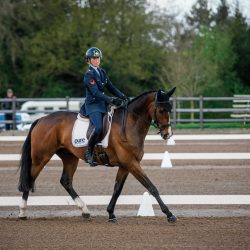 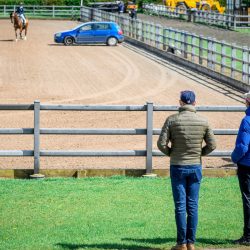 Swedish chef d’equipe Fred Bergendorff (right) watches on as Therese Viklund and Viscera prepare to enter at A. Photo by Tilly Berendt. 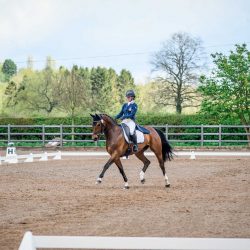 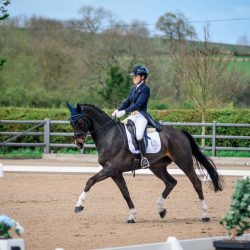 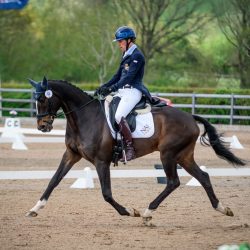 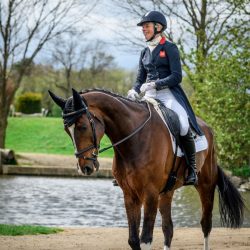 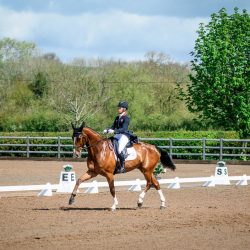 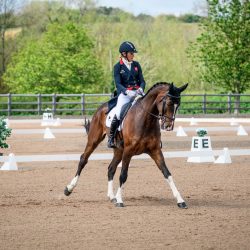 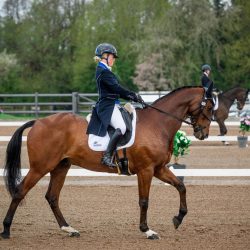 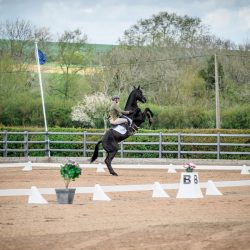 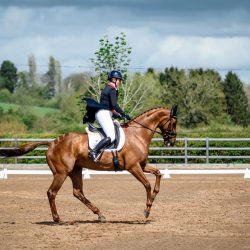 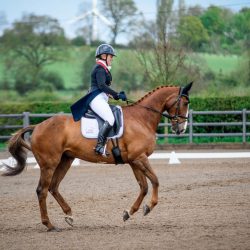 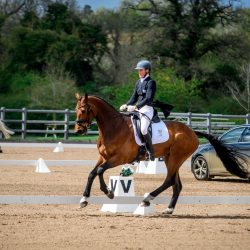 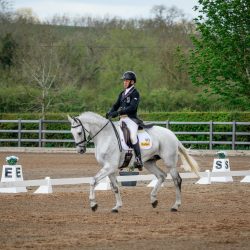 The top ten at the end of day one in Section B.