Juli Hutchings lives in Fair Hill, Maryland, on her farm, Appleton Equestrian. She has ridden to the FEI levels of dressage and eventing and denotes much of her success to her horses. She brought us this touching tribute to a special horse named Fling last week. You can find her best-selling novel, A Horse to Remember, online or in book stores. 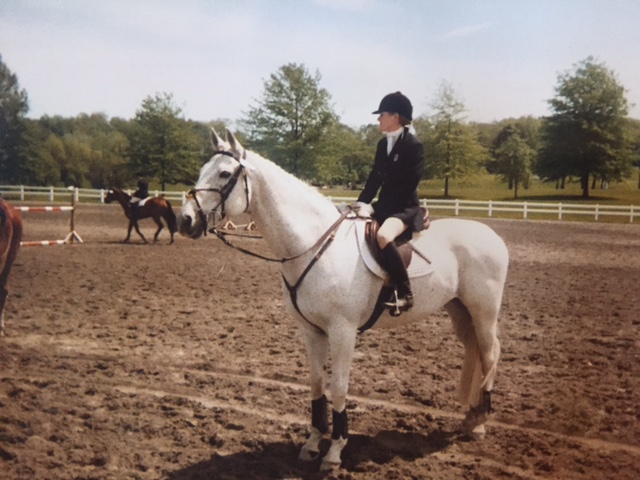 Fling awaiting the award ceremony at the 2008 CCI2* at Jersey Fresh. Photo by Anna Davidson.

In terms of horse shopping, the well known phrase “oldie but goodie” is a rarity. I find that most trainers, riders and horse enthusiasts would agree the most common attributes shoppers are on the look out for are “young, safe and sound.”

In terms of my students, I often hear they don’t want to look at horses over the age of 9. They want something to compete, but it has to be young and within their price range. With this budget most are left with off-track Thoroughbreds, six to 12 months off the track with little to no show miles.

I applaud the OTTB organizations that have given new life to thousands of homeless thoroughbreds. However, the hype has led some young and green riders who are still in the learning phases to buy an OTTB they aren’t always ready for.

A student of mine was recently in a similar situation. She was leasing the horses in my eventing program at Appleton Equestrian in Fair Hill, Maryland, and gearing up to compete them in her first recognized Novice. She came upon the funds to buy a horse of her own and wanted to keep the upward slope of advancing her riding.

With her budget, the OTTB was all she was pulling up to go see, and most had yet to compete. We found some promising ones, and she went to see a couple on her own, but I didn’t get the feeling it was what she needed in a horse.

After watching her work so hard to get herself to the Novice level, I had hoped that her new horse would continue to further her training. After a discussion in the tack room one night (our “Come to Jesus” as I saw it), she said she realized that it would be a lot more work than she wanted. She agreed what she needed to find was a packer, and for us, age was not going to be a factor. 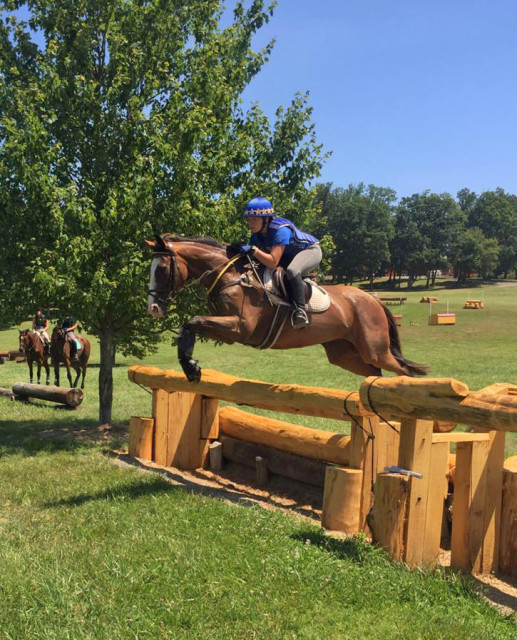 A week later we brought home Buddy, a 16-year old-gelding with miles at Prelim and a solid Novice/Training packer. The two picked up next week with a recognized Novice event, Buddy already being fit and ready to go after packing a young rider around this previous year. And the best part? He was a less than half the price of her original budget.

As a trainer, I could not be happier for my student. Whether Buddy gives her three years or five years, she will progress steadily up the levels with the extra funds going toward some maintenance to keep him comfortable. After his time, maybe she will find an OTTB to pay forward the wisdom learned from Buddy.

In terms of older horses, I am perhaps biased. Just last summer I took Guido, a 19-year-old dressage horse owned by my mother, Kate Hutchings, in my very first Third, Fourth and Prix St Georges level dressage tests. In one short summer, Guido taught me tempi changes, correct half passes and pirouettes. Now I can take this understanding onto teaching my future horses.

Today Guido is leased to a young rider who has consistently earned the High Point Champion for Third level at three different shows. One day too perhaps this young rider will pass on her knowledge to other horses or students. 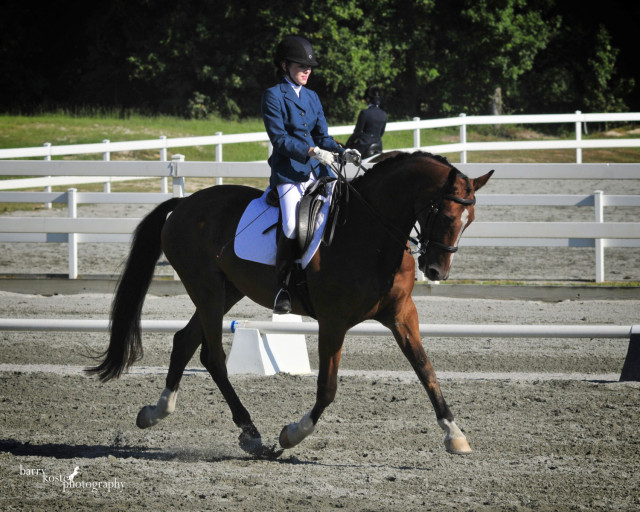 Another oldie but goodie came in the form of a gelding named Fling, a Prelim packer. We were both 16 when he took me to my first Prelim. My favorite memory with Fling is receiving the Traveler’s Memorial Trophy at the Jersey Fresh CCI2* in 2008, awarded to the oldest Thoroughbred to finish the event.

I lost him at 19 years old. Even had I known how short our time together would be, I would never go back and trade those three years for any other horse. Fling taught me more than any person ever could.

Now that I am a trainer and fortunate enough to run my own farm, I can only give so much to my students. A large portion of the learning curve comes from the horses you’re riding. That is why, for my program, I have Training level event geldings who have been there, done that. They are point and shoot at the jumps, and for kids and adults coming to me with confidence issues, or just looking to move up the levels, these packers are everything they need.

Of these event horses, the most popular schoolmaster on my farm, is one that doesn’t jump at all. Verbena is a 24-year-old Oldenburg mare, former seven-time broodmare. Bonnie Mosser, a well known event rider and friend, did all of the mare’s training. She once attributed her success as a rider to Verbena, owned by my cousin Ellen Sheppard McKee.

“Verbena made winning easy,” said Bonnie, who won the DeBroke Trophy aboard Verbena in the mid ’90s. The mare was also named USEA Horse of the Year for the Preliminary level. Due to a tendon injury after many Intermediates, Verbena was put to pasture and served as a broodmare for 10 years. 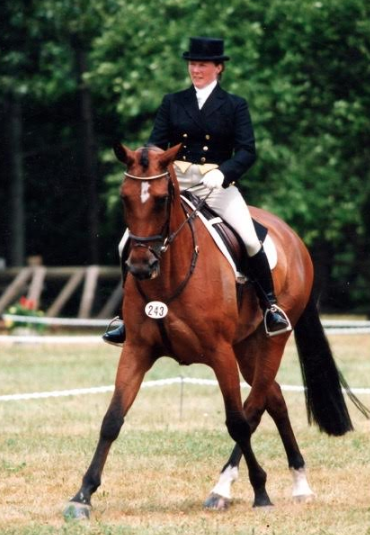 Bonnie Mosser evented Verbena to the Intermediate level in the ’90s and did all her training. Photo by Ellen Sheppard McKee.

In 2011, Ellen Sheppard McKee gave Verbana to my mom to use as a broodmare. After one beautiful foal, Verbena was unable to reproduce the following year. We struggled with our options. I decided to give her a test ride and see what she could do. The mare hadn’t skipped a beat in 10 years.

When I settled in on my new farm in Fair Hill, Maryland, my mom gifted me Verbena to use in lessons. Almost one year later, we all refer to the mare as the Queen. It is an honor to ride Verbena.

“Verbena is the ultimate horse,” says Julia, 27, of Elkton, Maryland. “She gives me the feeling that I could ride any dressage test and nail it! She is like riding on a cloud. She makes all of her riders look great and builds our confidence.”

Lisa Morgan, 47, of Wilmington, Deleware, says, “When I am riding Verbena, there is never any doubt that I am the beneficiary of a lifetime of experience. What I have learned from her in a summer has accelerated my growth immensely as a rider.”

With all these riders learning and adapting to better themselves, the most ironic thing of all is that the horses are just doing their job, something they were taught during their early years of training and continue to do for us every day.

Thus I see it as a circle that should continue to circulate: Good training leads to good horses, and good horses make good trainers.

I hope for all my students and riders alike that they may be so lucky to learn a thing or two from an oldie but goodie, like Buddy, Guido, Fling and Verbena.

After all, some of the best words of wisdom can come from a horse that has no words for us at all.