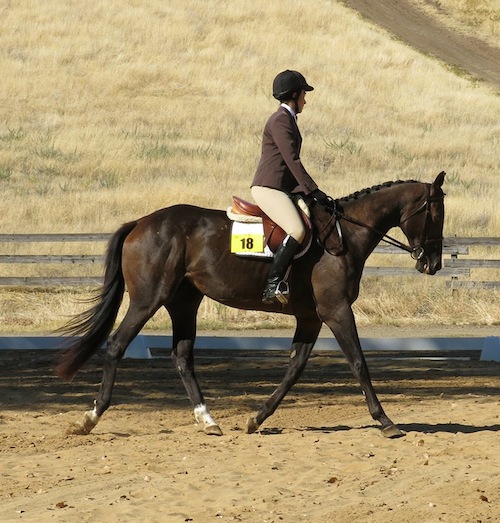 Stephanie Nicora aboard High In The Air

You never really know what the weekend has in store for you until it happens. You can plan, hope and visualize all you want but rarely does it come out exactly as anticipated. Often times the odd twists and turns paired with the sense of humor that the Eventing deities seem to have make for a better adventure in the end. [For backstory, read last week’s post When the Best Laid Plans Go Awry]

Stephanie and I got off to a late-start for our Camelot adventure on Friday afternoon. We had the grand misfortune of ending up stuck in traffic on the way to Chico. We pulled in a few minutes before dusk and even though we hadn’t been to a show together in years, managed to unhook the trailer, unload our gear, tack up and get out to the water-complex to school before the final rays of light were lost. We were our own smooth machine humming along in the low buzz of evening activity. We untacked and put the horses to bed by flashlight, then headed out for the night.

In the morning, Stephanie checked in and received her competitor’s packet. Terry Hilst, the event organizer, was kind enough to allow me to withdraw my entry and apply my entry fees towards future schooling at Camelot. I joked with the office staff that my score of W for the weekend obviously stood for ‘Winner.’

Stephanie and I walked the cross-country course together and strategized. This mostly meant repeating phrases we’ve been hearing in lessons at the places on the course that seemed most appropriate (read as: everywhere). We also kicked at dirt and calculated minute markers with my iPhone. From far away, we may have actually looked like we knew what we were doing.

After we finished walking, I knocked out some braids while Stephanie got changed. We debated back and forth as to whether or not she should wear my amazing red-and-black stock-tie for a long stretch. During this debate, somehow time compressed in the way that it only can before Dressage and we found ourselves hustling to get Stephanie to the ring on time. She had elected to go with a minimalist warm-up for Owen as it was his very first time out and we had no idea what his response to an active warm-up ring would be. He surprised us both quite a bit by being very reasonable in both the warm-up ring and the test itself. It certainly wasn’t the best test of all time as it netted her a 47, but it had some exceptional moments. Stephanie and I had some laughs at the 4’s but were particularly chuffed with the 7 for gaits, the 8 for her final halt and the compliment for her turn-out. 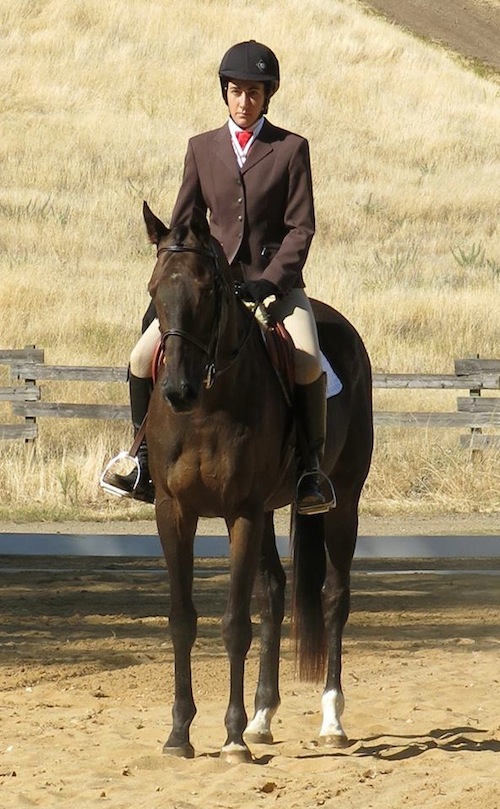 With Dressage out of the way, I found myself with time to slack off and socialize a bit. I ran in to Val Owen, whose daughter Chase Owen was competing in the Beginner Novice division. Chase has been riding Dragonfire Lotus, a lovely mare from Dragonfire. It was really quite nice to see Lotus going so well for Chase. Both Chase and Val commented on how much they were enjoying Lotus and how grateful they were to Jenny and Earl McFall for having allowed her to come teach Chase a thing or two.

Stephanie’s cross-country time drew nearer and we talked minute-markers while she changed and I tacked up Owen for her. In the warm-up ring Owen was the best I’ve seen him. He was bold but responsive and using himself quite well over the fences. Stephanie looked on her game as well. This is exactly where Stephanie and I forgot that Owen is very green. He is such a sensible fellow that it’s easy to forget what a hard past he’s come from and that he’s really only been at this whole Eventing thing for three and a half months.

Cross country did not go as planned, visualized or expected, in ways both good and bad. Ultimately, Owen did jump everything which was great. Stephanie and Owen racked up three stops before the half-way point at the water as well as another handful after. I suspect it was her truly fierce turn-out and steely gaze of determination that kept the jump judges and mission control from realizing that she’d gone well beyond the point of elimination. Had this been a recognized event, undoubtedly poor Stephanie would have had to go on the dreaded post elimination walk-of-shame off the course. 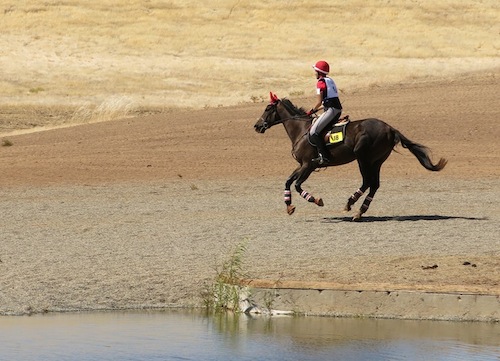 Despite the stops, taking out a flag, getting lost and narrowly avoiding an involuntary dismount, she came off of the course beaming and laughing. The fences she’d been most worried about were the ones that turned out to be non-issues. This was ultimately success. When we checked scores later, we found that they stopped counting the refusals after the third and gave her 60 faults. The extra time spent on course to re-address the fences added 32.4 time faults.

We debated whether or not she would be eligible to ride Stadium in the morning since the three stops should have netted her an E. Exhaustion started to set in and we went in search of food. While stuffing our faces the decision was made to haul ourselves out of bed early, pack up and get back out on the cross-country course before Stadium got started. We made it back to the hotel and realized exactly how tired we were when we spent 10-minutes laughing about how dirty my feet had gotten after walking the cross country course multiple times in sneakers and boot-socks. Stephanie called me “Hobbit Dirtfoot” which is a nickname I will probably never ever live down. I dozed off watching junk reality television – a show called ‘Naked And Afraid’ which is a really weird concept considering that these people don’t appear to win any sort of prize for finishing.

After a stop at Krispy Kreme the following morning we managed to climb on by 7:30. I rode out on my mare while Stephanie tackled the track from the day before in short bursts. After a bit change to give just a touch more ‘I’m serious’ to Stephanie’s half-halts, Owen went how she had initially hoped he would. He clocked around the first half of the course with no problems. I rode along and watched from a distance. The flag was down on one of the fences on the Beginner Novice track, so Stephanie opted to take a shot at one of the stretches from the Novice track. Something must have clicked for Owen as the five-fence loop looked quite nice and he did not attempt to drift towards my mare as they breezed past to the final fence in her set.

She was grinning from ear to ear and we called our early-morning ride a few minutes later after splashing through the water complex one more time. By then, activity was starting to pick up and we checked in with the organizers and found out that they were happy to let her ride her Stadium round.

Stephanie had sort of expected not to ride Stadium, so had to do a quick mental shift to get prepared as Stadium has always been the most challenging phase for her. Owen went the best he had all weekend. He looked briefly at the flowers at fence one, but Stephanie had her war-face on and put down a nicely ridden round. She went clear inside the time, but at 139.4 was not going to move up to the ribbons unless a few people fell off or decided not to show up. She still came out of the ring beaming. 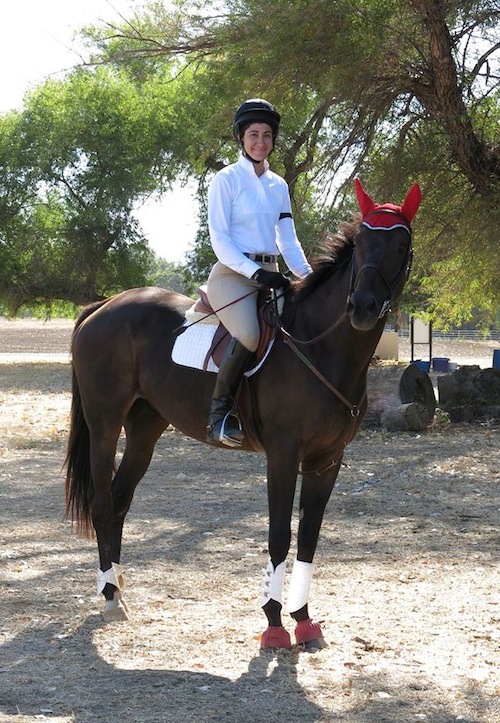 On the ride home we had a few good laughs about the absurdity of her final score and made plans to try and make it to Fresno County Horse Park in October and November. Our Dressage-score bet will carry over as it’s hard to say whether 139.4 or a W wins the dollar. All in all, it was a great first outing for Owen and what I needed to get out of my regular headspace. On to the next!