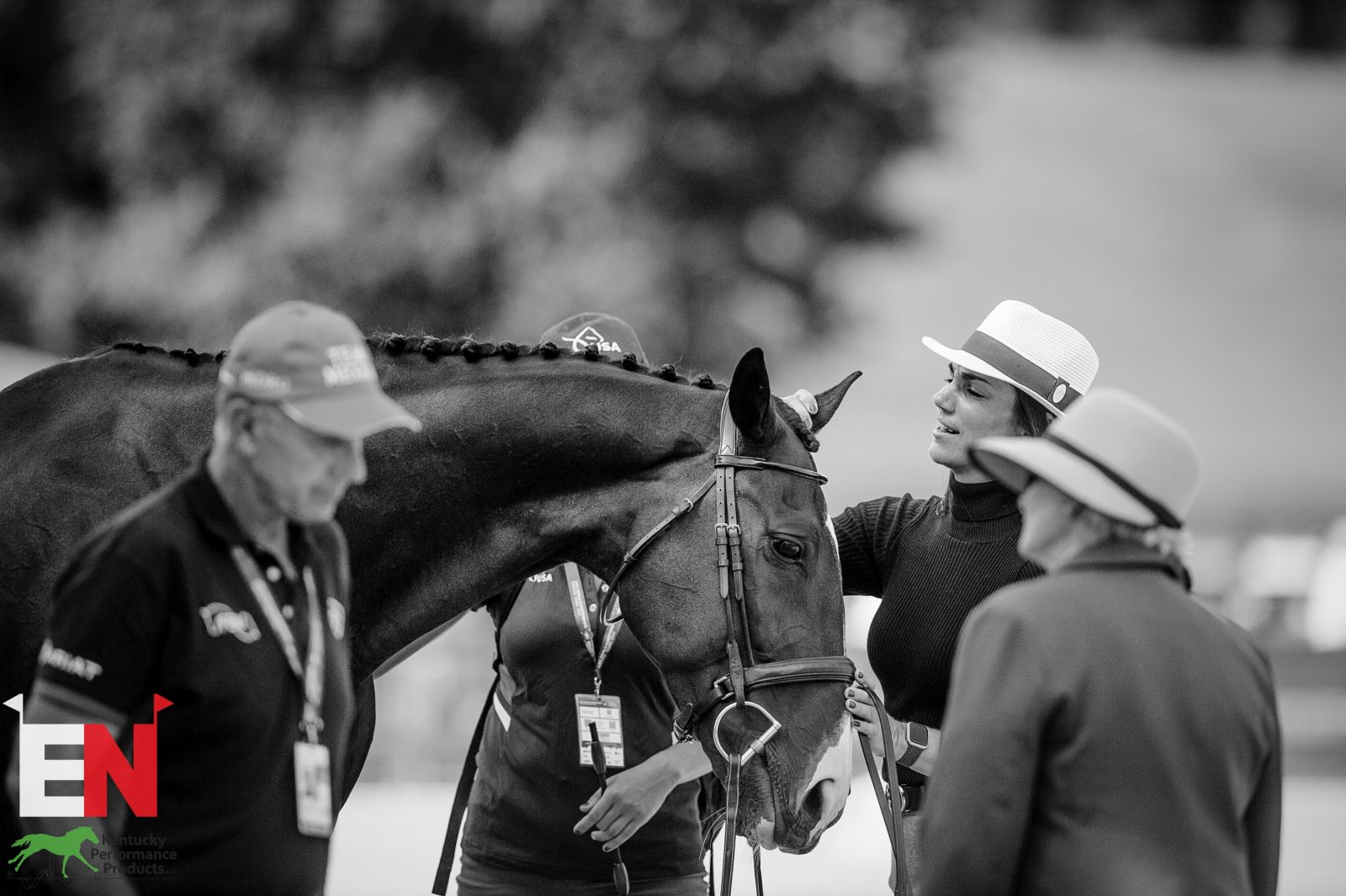 It’s all systems go for the United States and Canada as they prepare for the dressage portion of competition at the FEI World Championships for Eventing. We unfortunately saw a premature end for the stateside-based partnership of Daniela Moguel and Cecelia, but the ten remaining North American competitors have their blinders on now for a top performance.

Ahead of the start of the dressage phase, EN catches up with friends from back home for their thoughts on the event, their prep and all things Pratoni:

“Chef Bob,” as he’s known to some, is at the helm for the stars and stripes in his role as interim Chef d’Equipe. He’s been given a uniquely challenging role, to oversea an operation as massive as Olympic qualification in such a short term role, but Bobby’s taken to the role with pride.

“I think it’s a mixture of giving everybody the latitude to continue with their own programs, because that’s what got them here, but there’s so much structure that has to happen around this competition,” he said. “So I think it’s just all been about building the trust from the riders over the last few months.”

Riders for the most part have stayed true to their teaching and training principles, and Bobby’s made it his mission to achieve team cohesion amid that.

“I think I think our time in France was time really well spent. Because everybody really started to relax into the weekend in a positive way. And I could just feel the focus improving every day, and almost, actually, the relaxation. I think when you go into when you go into a training camp like that, when you’re used to riding tons of horses a day, and then all of a sudden having one horse to ride, there’s so many other things that can come into your mind. And I thought everybody just did a good job as the week progressed, really just focusing and relaxing, and concentrating on the things that were really important. I think they’re all in a really good place, mentally,” he said.

Of course, top form is what matters most for the team at the end of the day. “What really counts now is starting tomorrow through Sunday. And we’ll see, we’ll see. But everybody’s feeling very positive. I think we have a very good shot at doing well, if we just kind of keep doing what we’re doing and, and not get distracted. And I think the riders have been showing that they’re not going to let any distractions get to them this week.”

“I mean, the priority does have to be an Olympic qualification. But I’ve said, and I’ll say it again, a quarter of a step behind that, as far as I’m concerned, is medaling because we have the horses and the riders to do that now. And not two to six years from now, right now. So Olympic qualification is absolute, but hot on the heels is a medal because these guys deserve it,” he said. 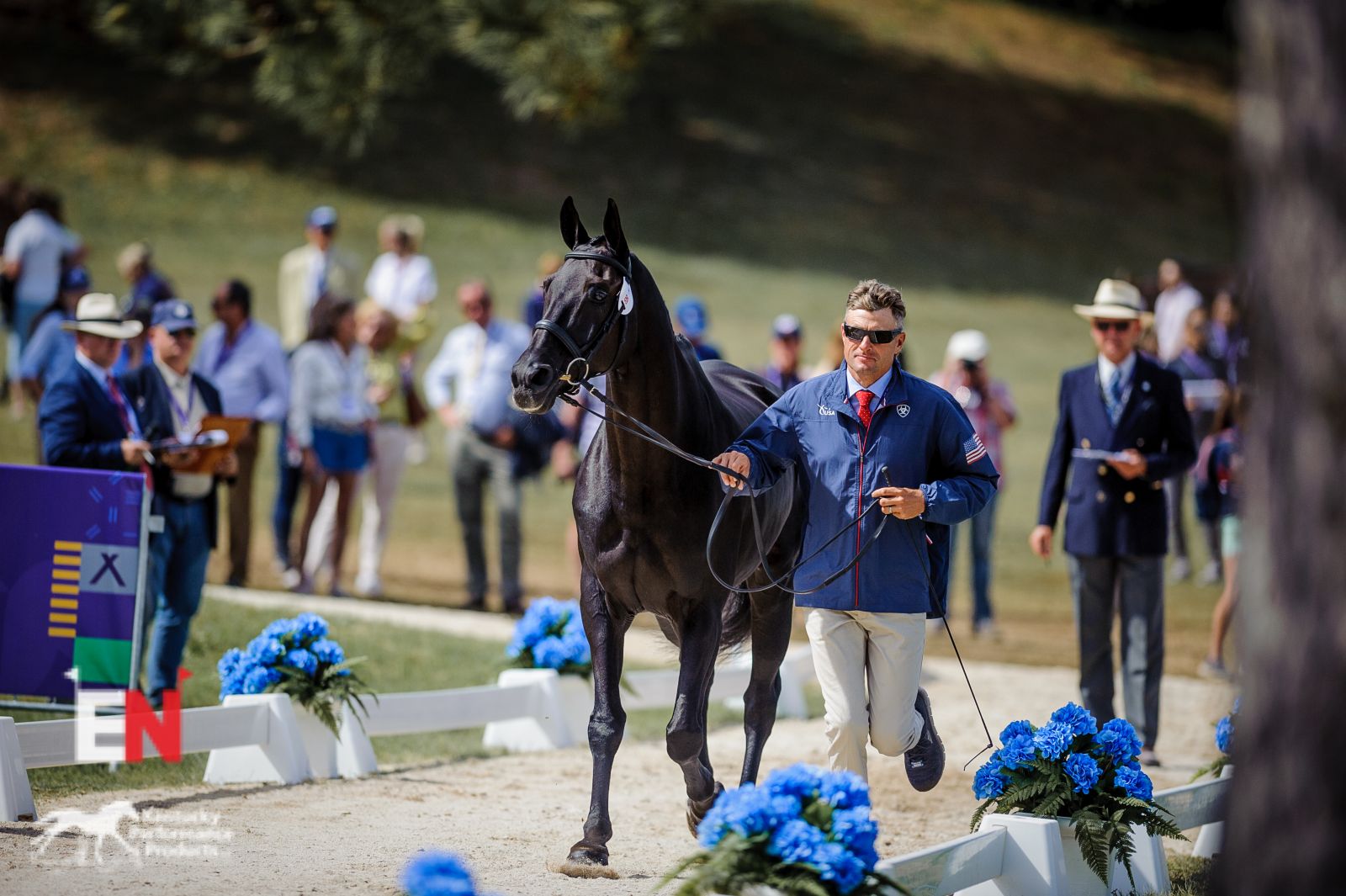 “It’s been a trip to the horses from great meadow to JFK to Frankfort to Vittel. And as he’s getting older, I think the key is to drill him less and less in preparation for good performance. So I’ve tried to leave him quite fresh. And his energy levels get quite high and looks like I’m going the end of the day on Friday. So I had my first workout on the flat today and he felt good. I’ll do a bit tonight here and give him a little jump tomorrow. I think he I think he should do a good test,” he said.

Boyd has been cemented as team anchor, so he’ll be the final team member to leave the start box Saturday. “It’s an unbelievable amount of pressure and nerves. And it seems glamorous, but it’s, you know, it’s a tough process just because you’re really trying to do every single thing you can for top performance. The biggest thing here is to ride really, really well and and give a performance of a lifetime — something that keeps you up at night.

“We’re close now — certainly crunch time — but I feel like we’re in a good place and it’s maybe it’s getting a little bit easier over the years because you sort of understand the process, but it’s still nerve racking process.” 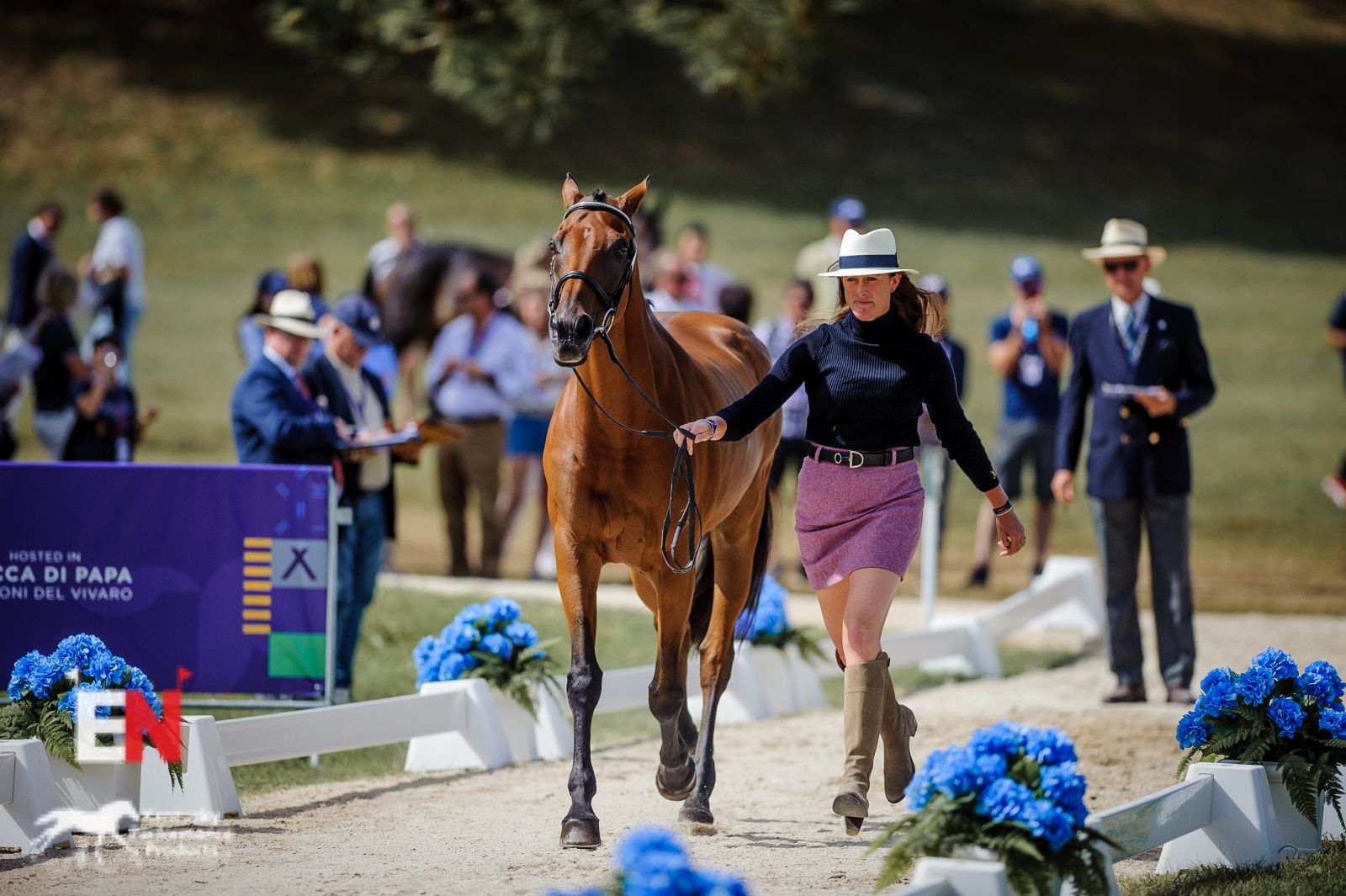 “He’s right where we want him,” Lauren said of the Anglo-Arabian.

“Vittel was amazing, and they were so welcoming to us. And it was perfect place to prepare but very quiet for the horses and they got to kind of stick to their normal at home routine, so it’s not like they’re gone traveling as much.” Lauren describes their French team training with such idyllic detail, she made us wish we had joined along.

The facilities included steeplechase tracks, competition arenas and a grass jumping arena, which should lead to their advantage come Sunday. “They really had anything we could want,” she said. And of course, the cherry on top was conditioning work along the facility golf course. “I think a lot of people saw the videos of us galloping on the golf course, and I’m not sure that golfers loved it, but it was perfect for us,” she said.

Lauren and Bug have been around the world together, and that wealth of experience helped in the planning for this Championship. “I think it’s always toeing that line of, you know, you want to do your best ever, but you also have to keep it realistic knowing that our job is to to put a team score on the table,” she said.

“It’s also preparing the best way for the horse and being competitive, but not drilling them past the point of their abilities and actually going the wrong way with the competitiveness. So, I think everybody’s found a really good balance of that. And with the training camp everybody really stuck to their normal plans, what they know works for their horse, and it was really cohesive group in that way. Like, nobody felt like just because someone was jumping, they had to jump that day. We all really stuck to what we would normally do with our horses leading up to a three-day, which I don’t think has always been the case in the past.” 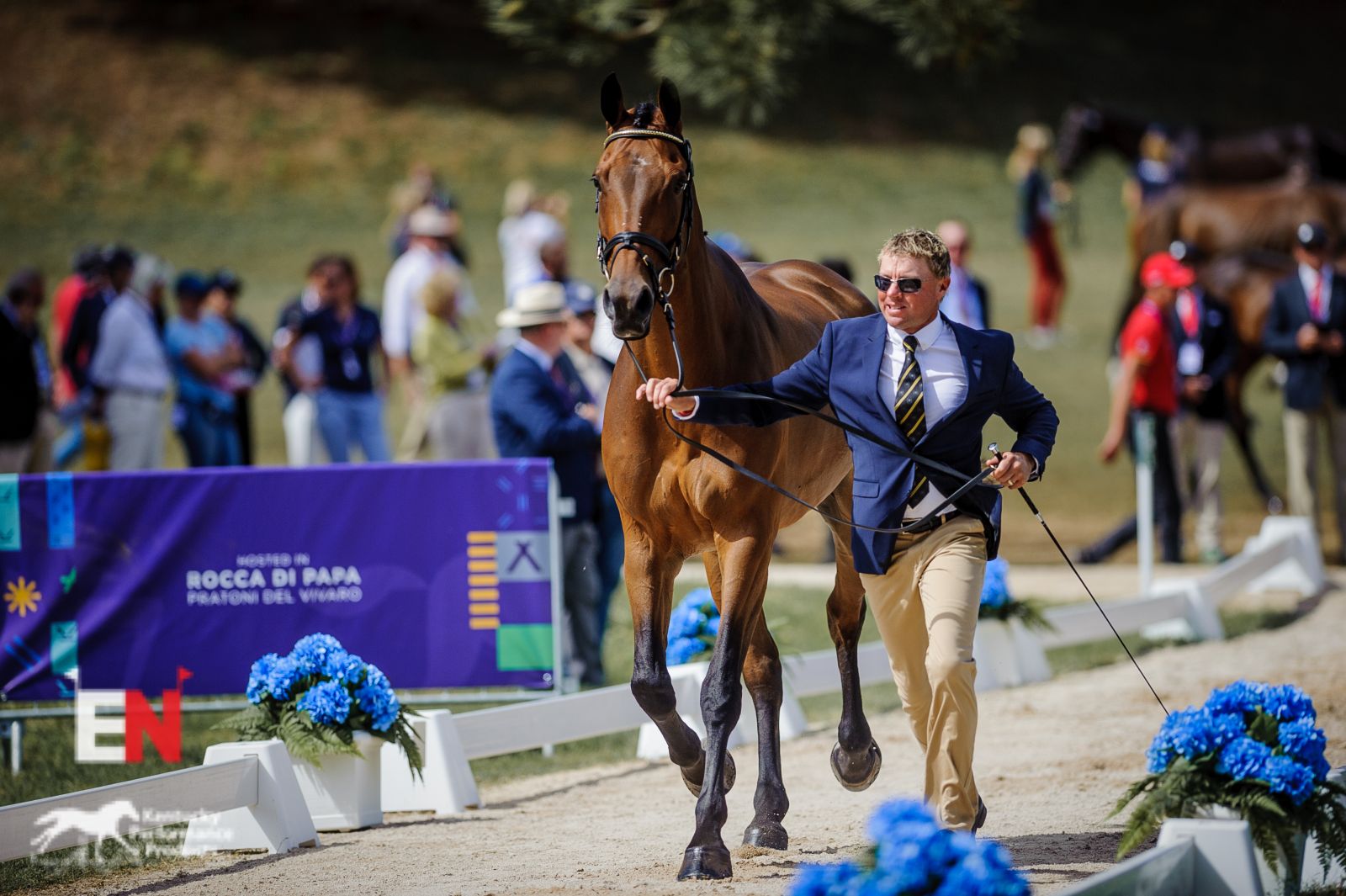 “[The lead up] has been great. He’s been has been in England all summer, and I’ve been going back and forth,” Karl said. “Chocy” has been based at Rodney Powell’s farm where he says, “the hills have been phenomenal for him.”

He’s also taken the summer to rethink their dressage performance with the help of Alex Franklin. “We’ve been changing his shape a little bit. And so I’m hoping it’ll peak this weekend, but maybe, maybe. We’ll see.” 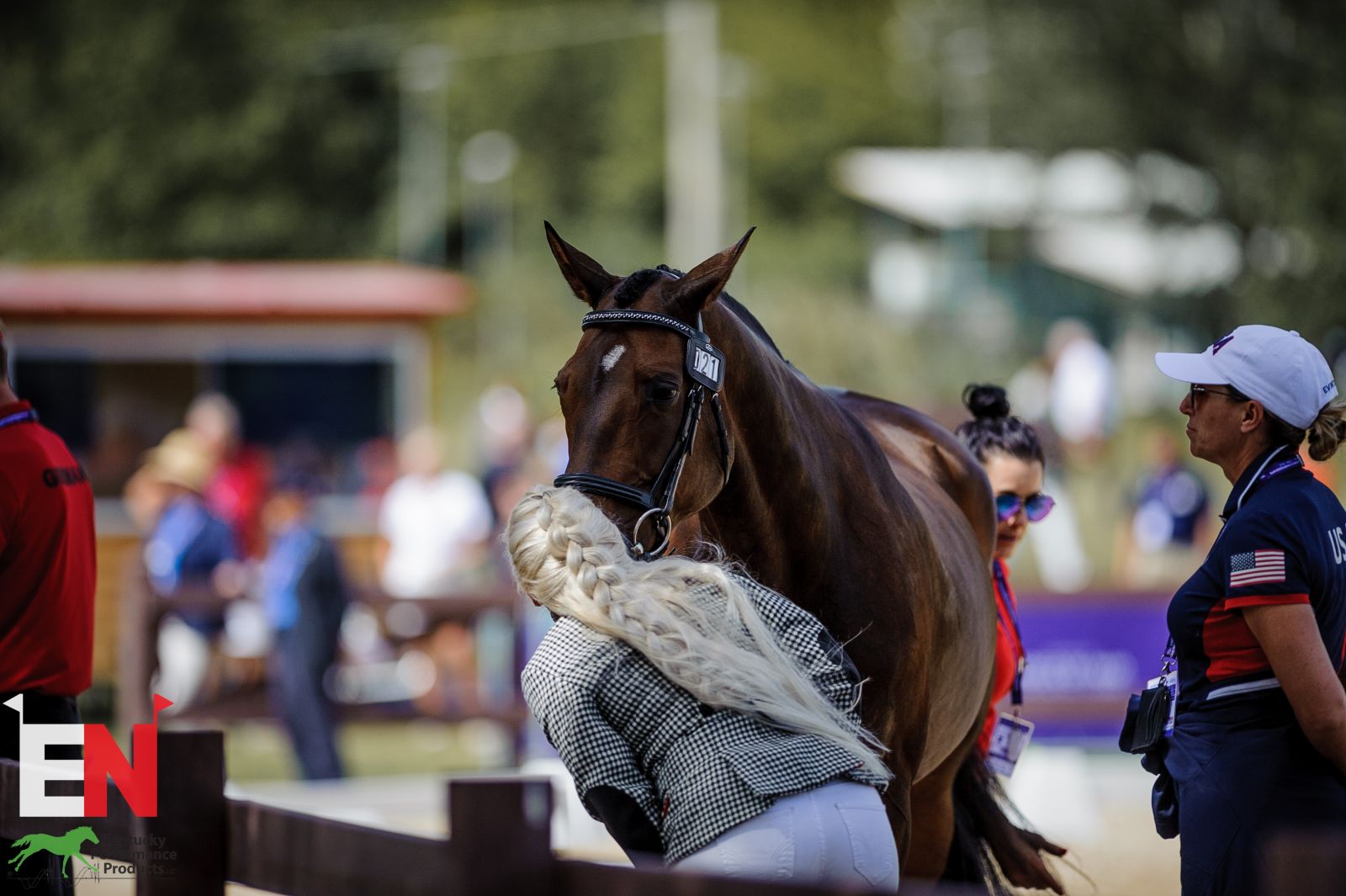 Hawley, a west-coaster based in California, says Jollybo has settled in pleasantly following their lengthy journey.

“It was a long haul from California. We flew with Apollo Equine, and flew from L.A. to Belgium and then stayed in the Netherlands. We stayed there for like five days, and then drove to Germany picked up Holly Jacks, and then drove from Germany to here, which was 32 hours — such a doozy,” she described.

“We’ve been here for about a week, [based just up the road at Italian eventer Mattia Luciani’s farm], so they’ve had a chance to settle. It’s hands down so nice — his whole family. It really gives me goosebumps — the nicest people I’ve ever met in my entire life. And his dad’s actually the vet here. So it’s really cool, and we love it so much. I really could move here. [I’m] blown away by the people the food and how beautiful it is.”

For Hawley, the tropical weather and ground conditions feel like home. “With the ground being dirt and it being hot, I think it’s good for us West Coast kids. It was it was 116 degrees when we left, so heat won’t bother us. But I mean, the first half, of course, is pretty hilly, so I think it’s going to be a true test. And it’s a World Championship course. Nothing’s easy when you put World Championships in front of it. So I’ve walked the course I think it’s gonna be tough,” she said.