Here at EN, we know that a big part of the heart and soul of this sport lies with local amateur eventers. That’s why we’re featuring awesome local eventing organizations that are recognizing and celebrating low-level eventers in our Schooling Horse Trials Spotlight series. Know of a great local organization or schooling horse trials that deserves some love? Tip us. 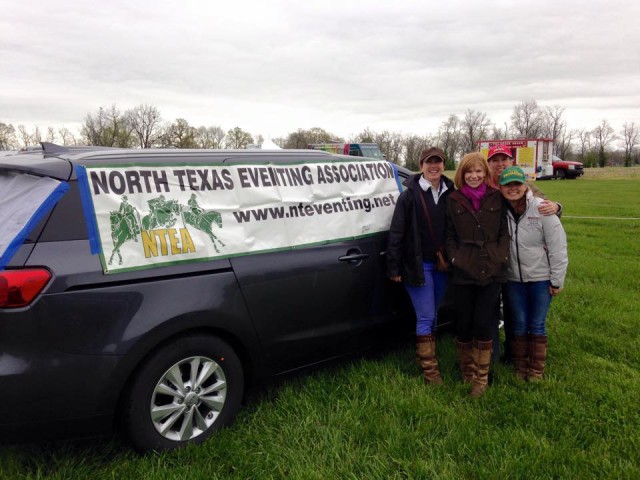 The formation of local eventing associations could perhaps be considered a turning point for growing the sport in the United States. It was over thirty years ago when the idea of forming local combined training associations was suggested by USCTA (now USEA) president Neil Ayer, and as a result “a band of merry eventers” in Texas got to work putting together what is now known as the North Texas Eventing Association (NTEA).

While the formation of the NTEA certainly wasn’t the beginning of the eventing in Texas, it very much helped grow the sport in the area. The organization has seen a steady growth in membership through 2012 after which their numbers have held around 300 people. Membership is split fairly evenly between adults and youth.

Still very much thriving today, the NTEA supports amateur and professional eventers, no matter what level of the sport they compete at. Not only does the association act as a resource for those competing at USEA events, according to Membership Director Harley Cozewith, “Most importantly, we encourage and support riders that are just entering the sport, both emerging youth or mature riders that are entering our discipline.”

Harley herself started riding as an adult and currently events her two Percheron-Thoroughbred crosses at the Beginner Novice level. “Whether I ever move up the levels or not isn’t important to anyone as long as I’m having fun,” she said. “I love that eventing is entry level friendly and welcomes anyone, with any horse, that is willing to suit up and come play! I appreciate the sense of adventure, camaraderie and generosity of experience and spirit that eventers bring to the sport.” 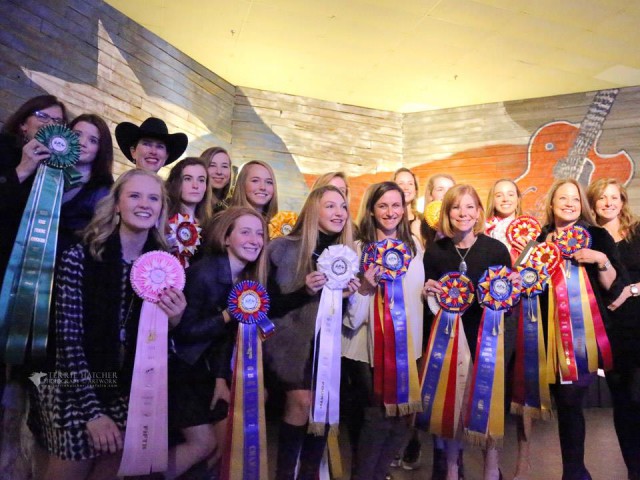 The NTEA offers separate year-end high-point awards for competitors showing in USEA recognized events and those showing in local unrecognized competitions. The comprehensive awards program incorporates all USEA levels, plus various introductory divisions for the local events, as well at recognizes and awards participants of FEH and YEH competitions.

“The number one thing I see that has caused our numbers to explode is enthusiastic leadership, coupled with frequent and meaningful communication with members,” said Mica Pryor, who has held several NTEA Board positions over the past six years, including serving as President for two of those years. “All it takes is a couple of really enthusiastic leaders with a little time to get out there and do something – people will respond.”

Two years ago the association was able to launch a new interactive website, allowing them to sell and renew memberships online, advertise programs, promote business partners, and generally keep in close contact with their members. “As we have grown, we’ve been able to utilize technology more and more to help us keep in touch with our members. We’ve tried to evolve, while being as cost-conscious as possible,” Mica said. 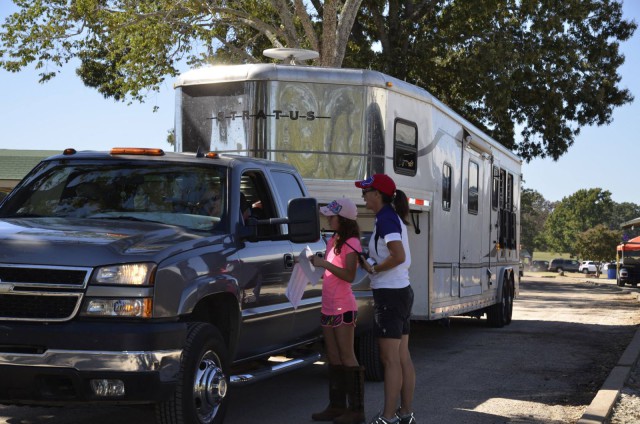 NTEA members Rhonda Sexton and Molly Scher check in competitors to the barns at the AECs. Photo by Harley Cozewith.

NTEA was officially incorporated as a USEA affiliate in the 1980’s. According to USEA CEO, Rob Burk: “Local Affiliates are an important part of the puzzle that makes up Eventing in the U.S. They work hard to create a local community, or network, for people with a common interest in the sport. Affiliates are quite often the first point of contact for new eventers.”

Rob was hired by the USEA about four months before the American Eventing Championships (AECs) were first held at the Texas Rose Horse Park in 2013, and he later took over as CEO in 2015. Helping to pull off the AECs in Texas was one of his first tasks with the USEA and he fondly recalls the NTEA being instrumental in making it possible.

“The NTEA brought out an amazing group of volunteers, riders and supporters. It would have been extremely difficult to successfully organize the AEC without the them,” said Rob. “Since the USEA does not have any staff based in Texas, the NTEA and other fabulous Area V volunteers were our eyes and ears on the ground and a valuable resource for us to tap into for local information.” 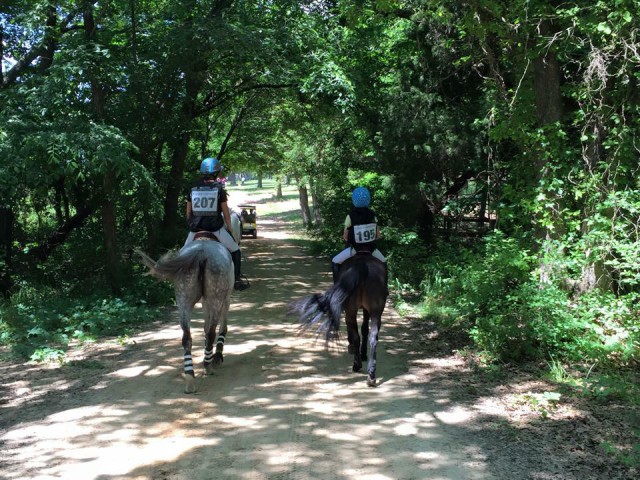 Riders at the 2015 spring Greenwood HT. Photo by Michelle Cheney.

The NTEA has been able to work symbiotically with the officers of USEA Area V to the benefit of all levels of eventers. “NTEA has developed a terrific working relationship with Area V and view our role as a partner with Area V, not an adversary,” Mica said. “Area V’s savvy leadership recognizes the value of the local eventing associations and does what they can to support us and call on us for help when needed.”

“We also provide an important source of education for riders in our community that might not have ready access, through either geography or economics, to the ‘village’ that it requires to get a horse and rider team ready to compete,” added Harley. “The Eventing community is a very broad based pyramid with a handful of elite riders at that top supported largely by the lower levels. By providing education and encouraging the entry levels of our sport, we are providing a foundation for the sport as a whole both nationally and internationally.”

Educational opportunities for NTEA members include low-cost clinics and and workshops as well as annual scholarships. This year the organization is excited to welcome Todd Meister, farrier to the U.S. Olympic Team. Open schooling sessions and combined tests also allow members access courses at local farms and event venues. 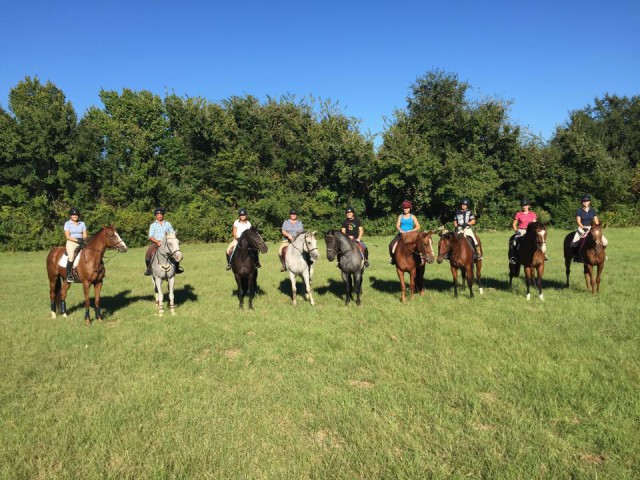 “We view our mission as a grassroots organization to bring people into the sport and nurture them as they travel their individual roads, whether that be attending their first schooling show, progressing to recognized shows, and moving up the levels as and when they are ready,” said Mica.

The folks in NTEA’s leadership roles come from a variety of riding backgrounds – from adult amateurs at the Beginner Novice through Preliminary levels, moms of Junior and Young Riders, fans of the sport, retired competitors, trainers, and show organizers – there are a variety of perspectives and skill sets helping North Texan eventers succeed.

“I love eventers and eventing,” Mica said. “The work ethic, character, discipline and friendships my family and I have gained from this sport are invaluable. I wouldn’t trade a single minute for anything.”