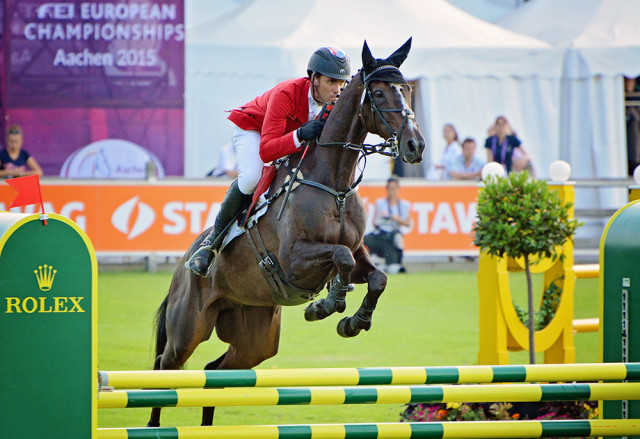 Paul Tapner’s four-star partner Indian Mill has been sold to the U.S., and Phillip Dutton will compete the horse for his new owner this spring. David Garrett purchased the 11-year-old Thoroughbred gelding as a potential Young Riders mount for his daughter, Holland.

Formerly owned by Sally and Colm McGinn, Paul produced the horse from a 5-year-old at the BE100 level through to the CCI4* level. Bred by the Buller family at Scarvagh House Stud — who also bred Andrew Nicholson’s four-star partner Calico Joe — Indian Mill is by Millkom out of an Indian Ridge mare.

Indian Mill has a 100 percent FEI completion rate in his five-year career. Paul and Indian Mill finished 14th at Badminton CCI4* last year, as well as 17th at Pau CCI4*, 21st at Aachen CICO3* and ninth at Barbury Castle CIC3*. In 2014, they finished 2nd at Burnham Market CIC3*, fifth at Tattersalls CCI3*, fourth at Gatcombe Park CIC3* and third at Blenheim CIC3*.

Paul announced the sale yesterday: “Today we sadly waved good bye to Indian Mill, aka Monkee. A massive thank you to Sally and Colm McGinn for allowing us to campaign their horse and for being such fantastic supporters to our team. … He was ranked in the top 20 of all British Eventing Official horses in 2014 and 2015. We will miss Monkee very much on the yard, but would like to wish him well in continuing his career in America.”

Phillip told EN he is looking forward to campaigning Indian Mill: “It’s an exciting opportunity to work with the horse, and the plan is to evaluate him this spring to see where he will be the most suitable,” Phillip said. “David’s daughter, Holland, has been training with me and has a goal to compete at Young Riders, so we will be considering that.”

“Monkee” is on a flight now traveling from England, and Phillip said he will arrive at Red Oak Farm, his team’s Aiken base, this Friday, Feb. 22. We’re looking forward to seeing Phillip and Monkee out and about on the circuit this spring.