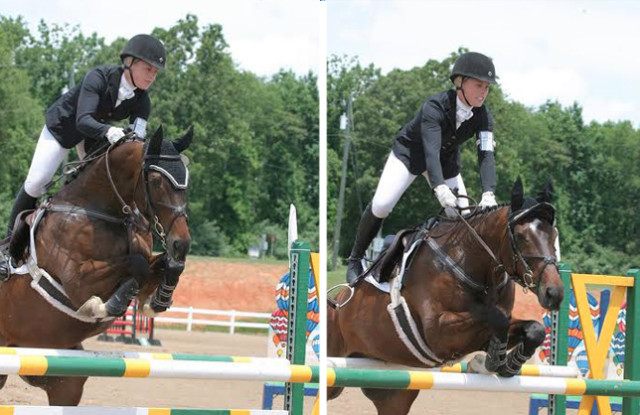 As Pearl Macgregor put it — “Apparently there was more than one save at the Virginia CCI* this spring!” Pearl sent in this priceless photo of her Oh Crap Moment during show jumping with Feruzi. “Freddy” started the round a little backed off, adding a stride between the first two fences, she explained.

“I then should have deviated from my plan of riding fence two to fence three in a forward four strides and sat quiet for the five instead,” Pearl said. “I put my heart and soul into that four-stride line. Too bad we made it down there in 4.5! My horse rarely stops and didn’t consider that an option for a second. In true Freddy form, he kept on truckin’ as though nothing was going wrong at all — just look at those ears!”

What an honest horse! Pearl said she and Freddy pulled themselves together after that jump and finished their round with one rail down, which moved them up from 32nd to finish 15th in the horse’s first CCI*. Many thanks to Brant Gamma Photography for capturing this great moment.

And if you missed last week’s save — which was our most-viewed post of the week! — click here to see Kelsey Wilkins defying gravity at the Virginia CCI*. Have an impressive save to share with us? Send the photo or video to [email protected]. Go Eventing.