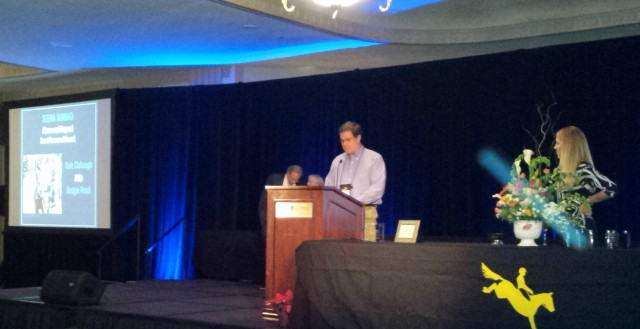 Mark Hart presents the PRO Above and Beyond Event Personnel Award to Bodgie Read and Dale Clabaugh on Friday night. Photo by Holly Covey.

We are all in convention hangover, those of us who attended the 2015 United States Eventing Association Annual Convention. What that means is you’ve got at least two loads of laundry to do and a lot of barnwork to make up for the days you’ve let the family members take care of the horses.

So I’m choosing to concentrate on the good memories of the great people I met. I’ve been in eventing for awhile so some of the people I’ve known before, but I think those of you out there in eventing land ought to meet these people before you die.

Mary Coldren: There is no one more suited to being a top notch event secretary than Mary. She has a sense of humor with no boundaries, a patience level that would pretty much put her in sainthood category, and a steel-trap mind (she remembers Boyd’s and Sally’s USEA numbers by heart). There is no one better to be handling the complicated business of entering events — her “Secretary College” on Saturday morning was quite easily one of the best seminars all weekend.

Diane Pitts: This lady can dance. Her shoes were off within minutes after the last Hall of Fame speech on Saturday night and she was twirling. Not only can she dance but she’s a great leader for the sport, too, and we owe the volunteer initiative approval to her, because I whined and she listened, and somehow got our presentation squeezed onto the very full agenda. Cheers for Diane Pitts!

New Hunk Rob Burk: Wow, so cool to have such a great guy at the helm of the USEA! Yes, I am sucking up. He’s helping us get the volunteer initiative going, so I’m definitely a big fan, but his talent and overall good-guy-ness has long been recognized by many others in the sport who knew he would be a superior fit following the phenomenal Jo Whitehouse’s retirement this year.

David O’Connor: I think he ducked into, attended, listened, spoke, led and presented something at every single meeting in every single room the whole convention.

Mark Hart: This is one of the nicest guys you would ever talk to and has been a huge supporter of eventing for a very long time. He owns Poggio II, who is retired now, and Mark reports he has a donkey for a close friend that runs his life and he’s totally attached to it. What a great story, and a great man for eventing horse ownership and organization leadership.

Phyllis Dawson: ICP program supporter, Board of Governors, former USET team member who rode in the 1988 Olympics in Korea. She sat next to me at dinner and said that in Korea, roads and tracks was an hour and a half, and the steeplechase was four and a half minutes long, with cross-county 13 minutes long. She rode Albany II and was the only American to finish, placing 10th. Steeplechase four and a half minutes! She said horses at the that level did not last long in those days. Wow. These are the folks who came before us, and we are damn lucky they stuck around to help us improve the sport.

And, finally, while I did not get her name, the “You Are An Eventer” person, who spoke at the Summit, calling herself a low level rider and “not really an eventer,” who was immediately corrected by just about EVERYONE in the room, in concert.

That was a defining moment of the convention for me. This was repeated in our volunteer meeting where someone said, “I’m not really an eventer because I don’t ride, but I volunteer,” and the entire room repeated the admonishment again — “You ARE An eventer!”