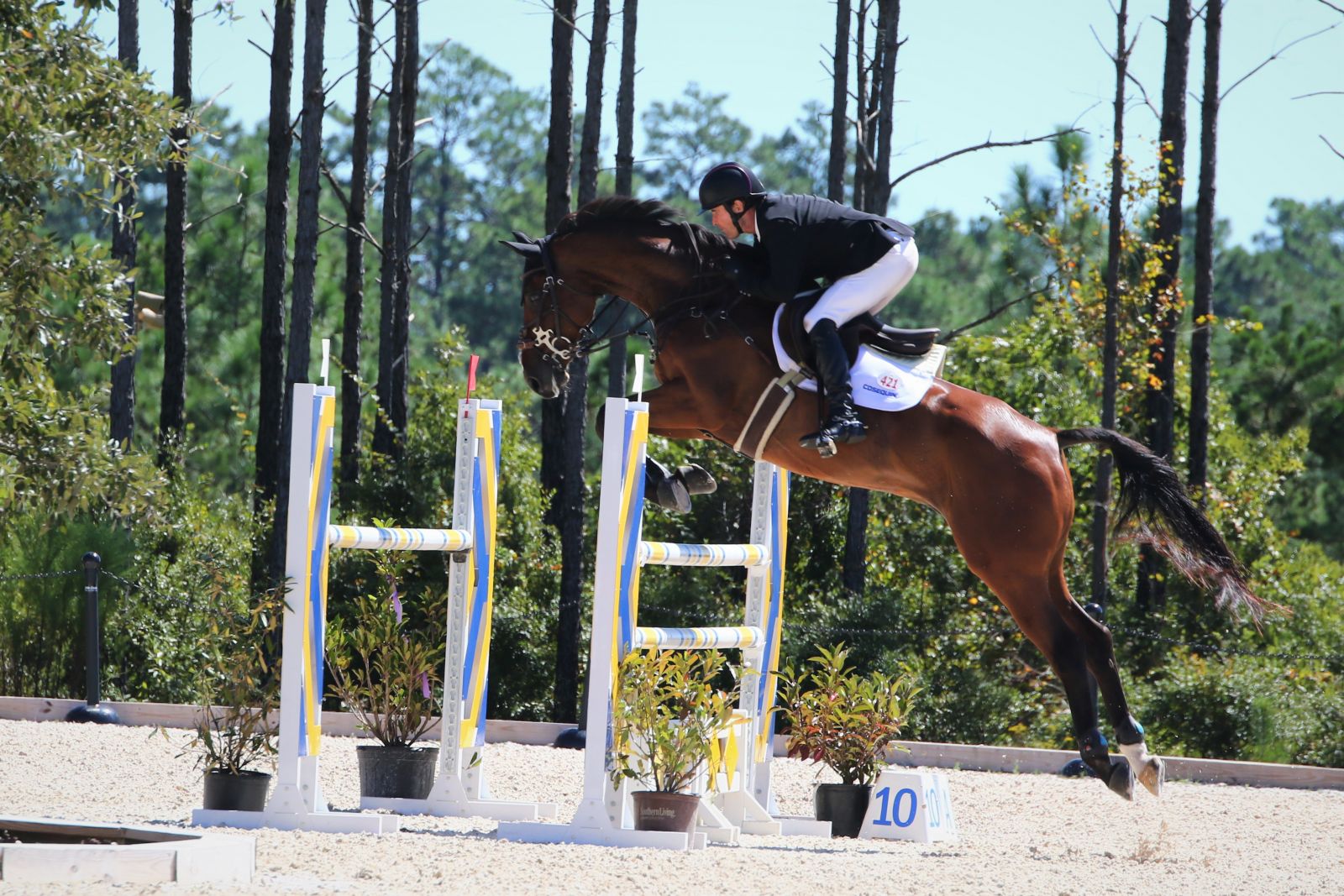 We’re heading straight into a very exciting fall season in eventing land, and this weekend’s 400+ entry-strong Stable View Oktoberfest, featuring $60,000 in prize money, is one big prep where we’re getting a glimpse of horses and riders preparing for fall three-days. We’re through the first two phases in the headline CCI4*-S division, and it’s MARS Great Meadow International winners Phillip Dutton and Annie Jones, Tom Tierney and David Vos’ Fernhill Singapore in the driver’s seat on a score of 28.2 following show jumping.

Fernhill Singapore (owned by Tom Tierney, Annie Jones and Dave and Patricia Vos) keeps getting better and better in the dressage phase, and I was very pleased with him yesterday at Stable View. He earned his personal-best dressage score of 23.8 and currently sits in the lead in the CCI4*-S. He'll run cross-country this morning at 11:51 a.m., following Sea of Clouds at 10:57 a.m. 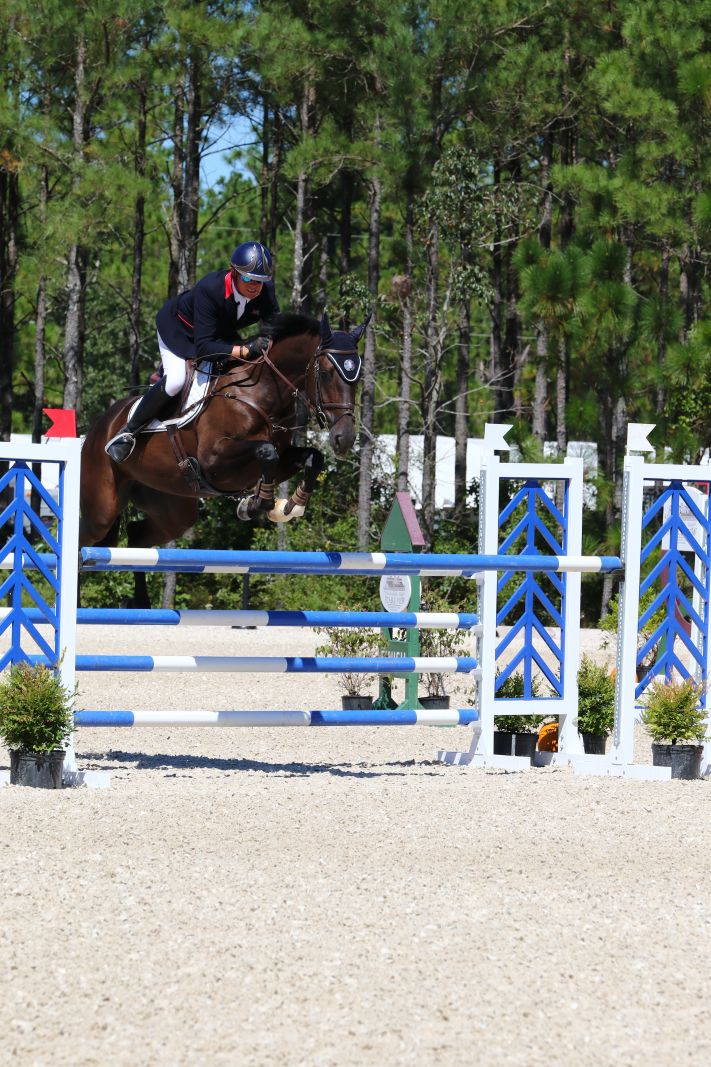 Show jumping did a bit of a shuffle among the early leaders, and while Phillip will retain the lead he took in the dressage, three of the newly-formed top five combinations moved up by turning in double clear jumping efforts. Clayton Fredericks and his Maryland-bound partner, Kingfisher Park’s FE Stormtrooper moved from sixth into second, followed by Leslie Law occupying the third and fourth positions aboard Beatrice Ray-Herme’s First Class (31.5) and Jackie and Steve Brown’s Lady Chatterley (31.9). Leslie moves both of his rides up from outside of the top 10. Kyle Carter and Christy Edwards’ Reddy Or Not complete the top five, dropping just a shade with one pesky rail down on Chris Barnard’s show jumping track, on a score of 32.3. 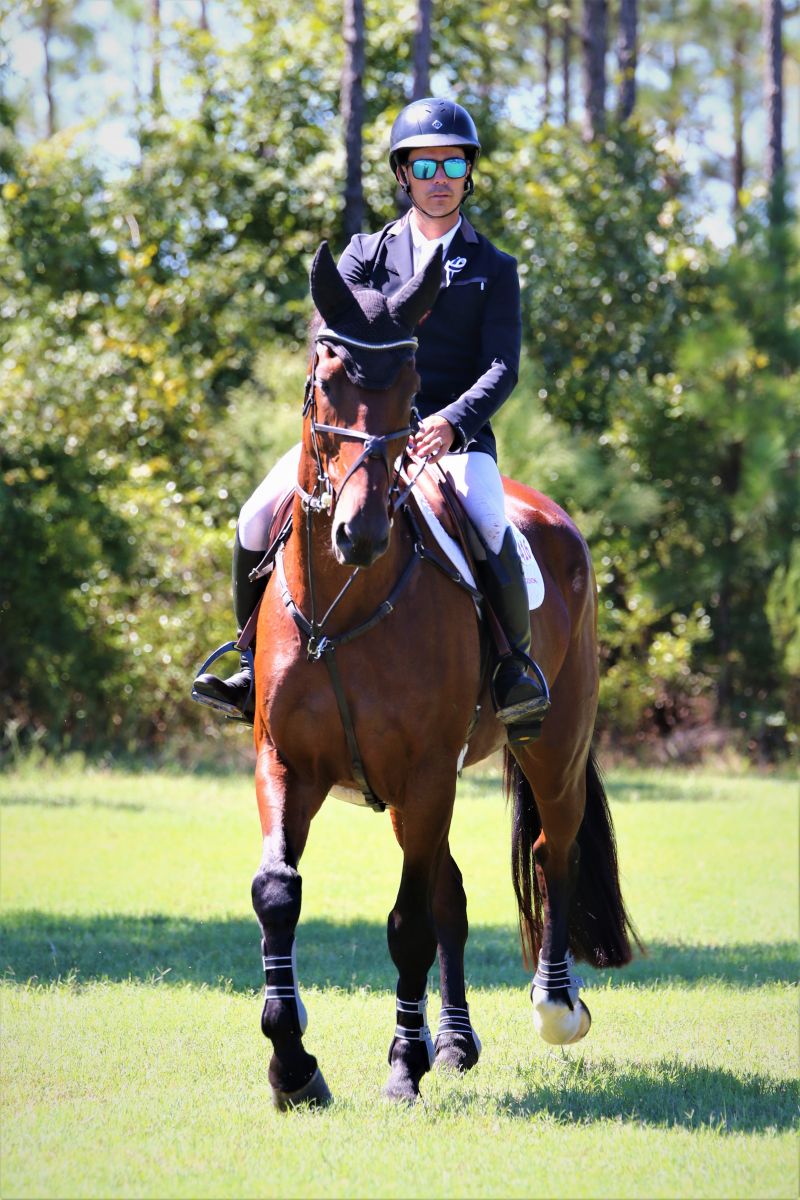 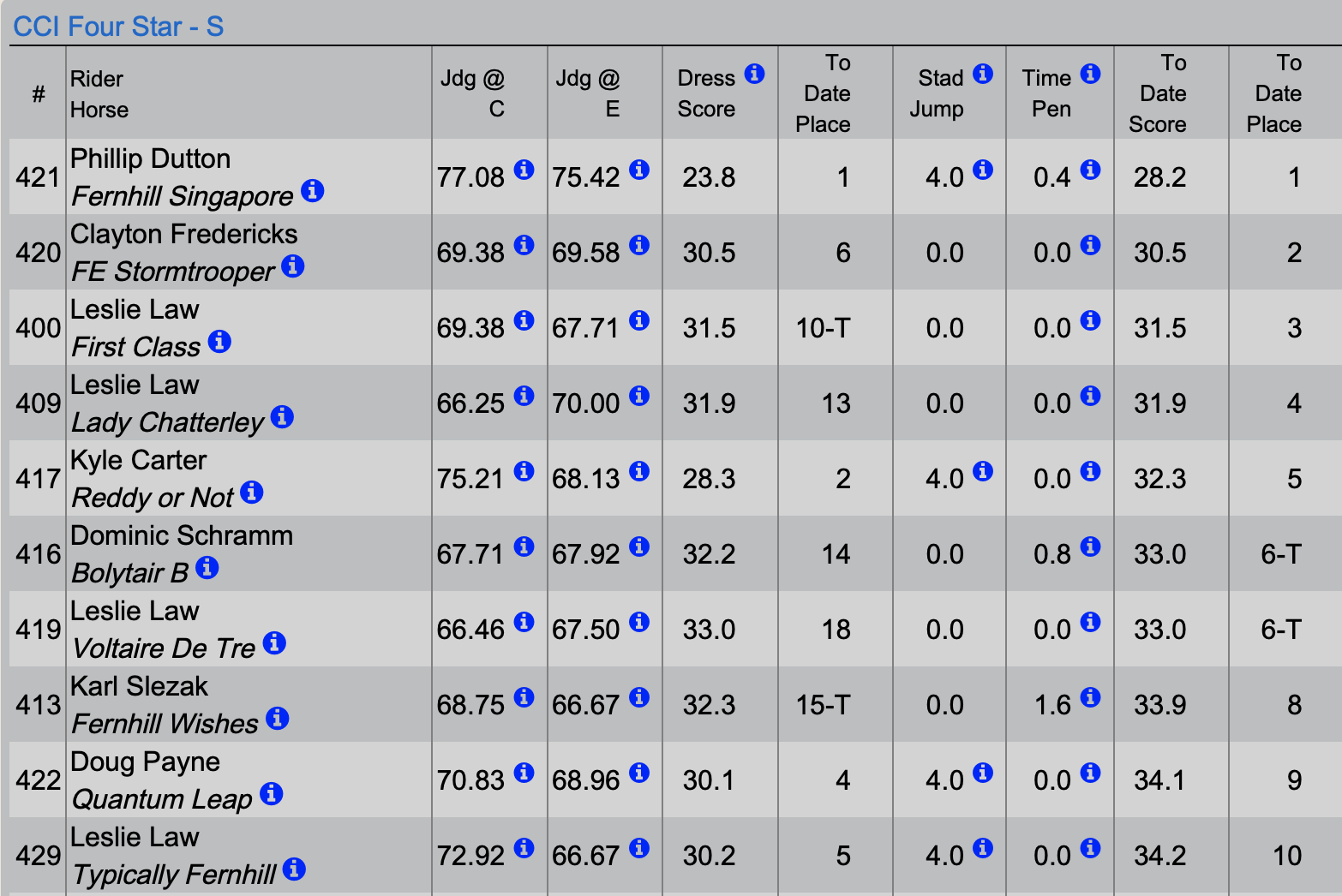 Looking to the other FEI divisions at Oktoberfest, it’s Ellie O’Neal with Sally Cox’s Zick Zack leading the way in the CCI3*-S on a two-phase score of 27.0, moving up from second after dressage thanks to a double clear show jumping effort. Ellie is aiming for the CCI3*-L National Championship at Maryland next month with the 12-year-old Swedish Warmblood mare.

Autumn Schweiss and Global Invieto DHI, owned by Julie Schweiss, moved from third up into second position heading into tomorrow’s cross country on a score of 27.1., followed by Candace Bell and Fernhill Philm Star on a score of 27.6. This pair is also heading for the Maryland CCI3*-L as their big three-day of the fall season. 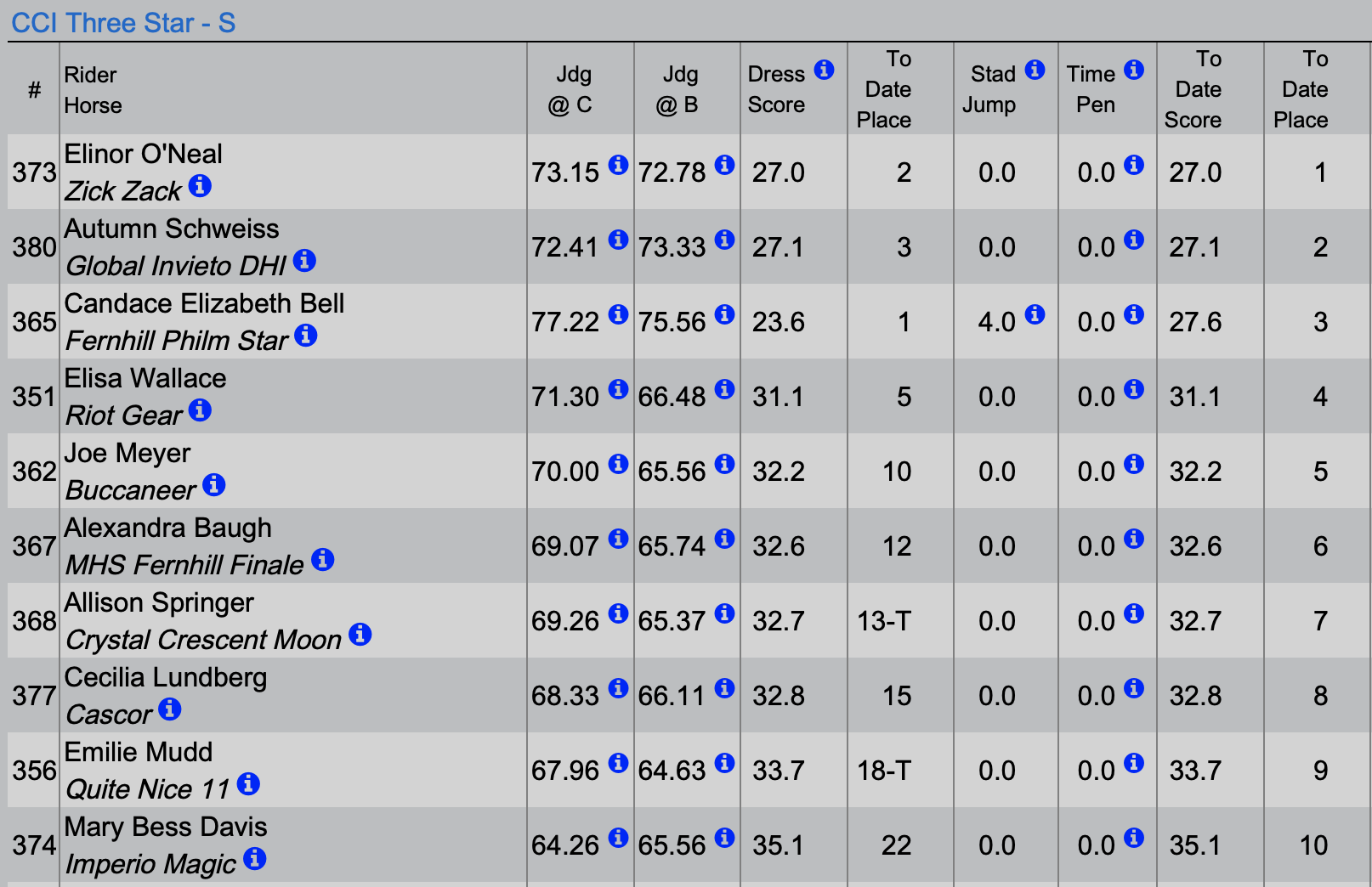 Liz Halliday-Sharp and Ocala Horse Properties’ Shanroe Cooley, the newly-crowned Preliminary Horse champion from the USEA American Eventing Championships last month, will share the dressage lead in the CCI2*-S, sitting alongside Jenna Sack and her own Fernhill Imperial Flight, each earning a score of 27.6. Jenna and Fernhill Imperial Flight have been on a championship tour themselves, finishing second in the Area II Preliminary Championships at this venue earlier this summer as well as sixth in the Preliminary Amateur Championship at the American Eventing Championships. Daniela Moguel and Pedro Gutierrez’s Estela de la Galerna, a 9-year-old Mexican Sport Horse/Irish Sport Horse mare making her FEI debut, are in third after the first phase 28.1 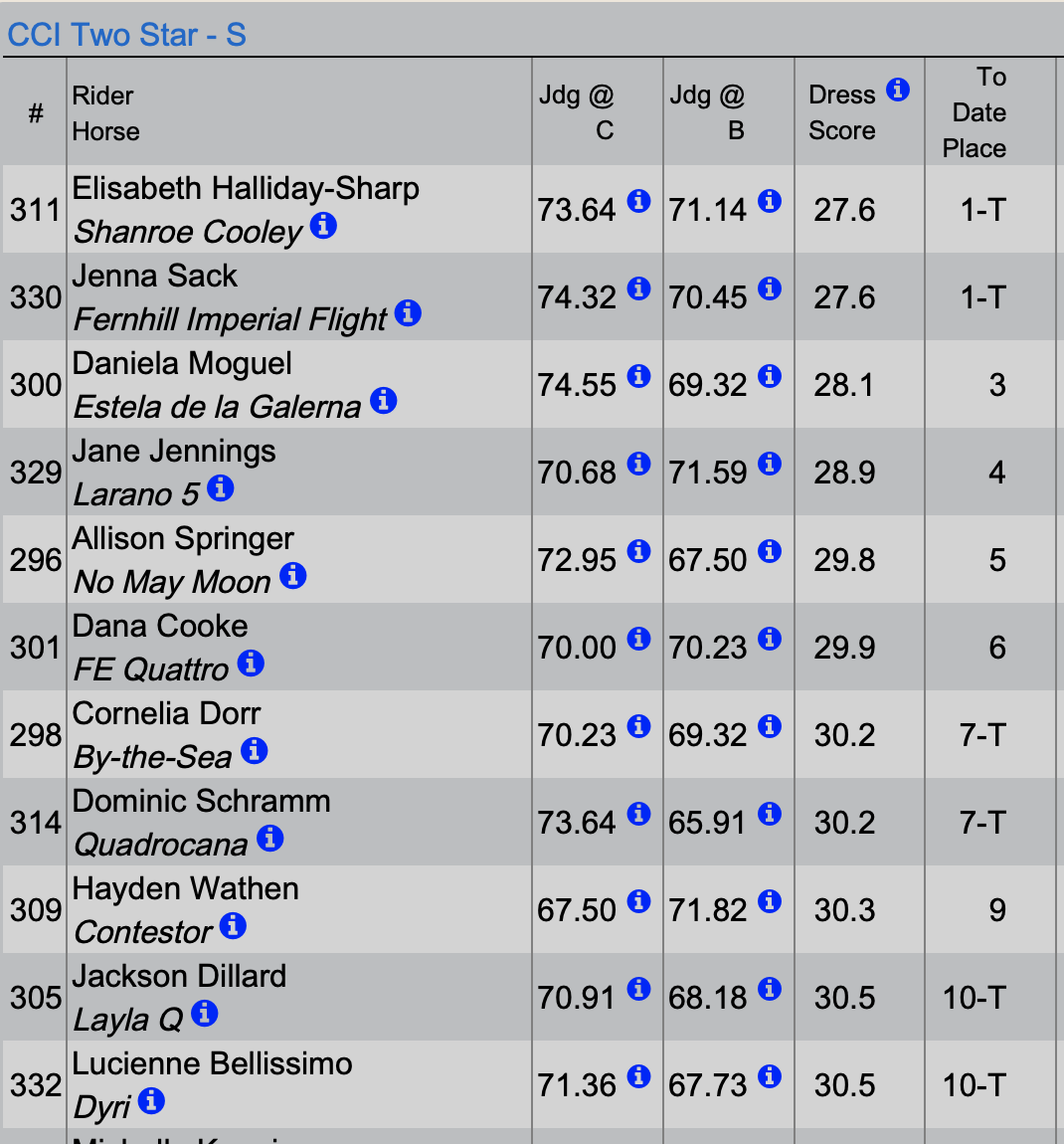 Shelby Allen will be on the ground for tomorrow’s jumping action, so stay tuned for much more from Stable View! Many thanks to Emilie Rollett, who’s been helping with photos and press releases from Stable View. And as always, Go Eventing!