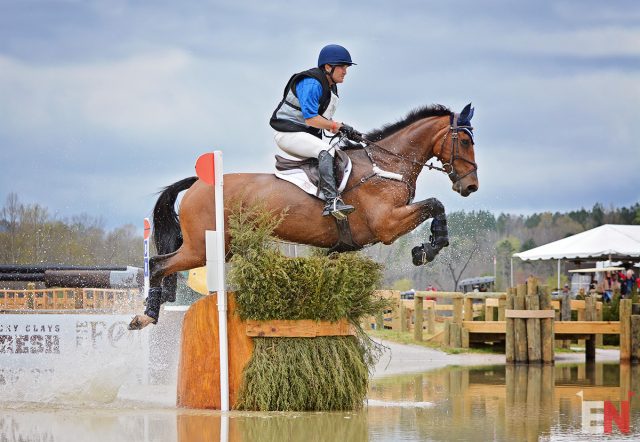 The clock proved to be the key factor on cross country today at The Fork CIC3*/World Equestrian Games Test Event here at Tryon International Equestrian Center, with Phillip Dutton and Z rocketing to first place on 28.0 after crossing the finish just 1 second over the optimum time.

Phillip said Z, a 10-year-old Zangersheide (Asca X Bellabouche, by Babouche VH Gehucht Z) owned by the Z Partnership, is “point and shoot” to ride on cross country and handled the rolling terrain with ease across Capt. Mark Phillips’ course.

“The goal was to step things up a little bit from what I’ve been doing as far as speed goes, but keeping him within himself,” Phillip said. “The course I thought in general rode well. Because of the golf-course terrain you’re working all the time with your lines and the different ups and downs. He’s a bit of a freak of a horse so it was pretty fun going around.”

Z is aiming for his CCI4* debut at the Land Rover Kentucky Three-Day Event, and Phillip said he was especially pleased with the horse’s dressage test yesterday, which placed him seventh heading into cross country, as he can struggle with tension in the first phase.

“You never know until you get to a four-star whether they are a four-star horse,” Phillip said. “So far he has shown everything I could ever hope for that he’s going to be ready for it. 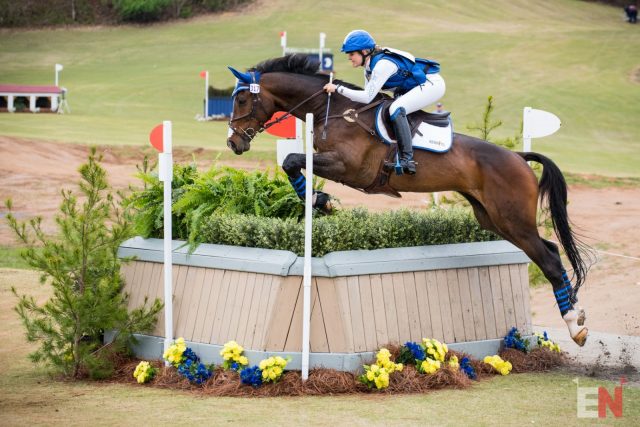 Jordan Linstedt and Revitavet Capato jumped clear with 3.2 time penalties to move from fourth after dressage up to second place on 29.9. “Capato,” a 15-year-old Hanoverian (Contendro I X Annabelle, by Amoroso) owned by Jordan and Barbara Linstedt, competed at The Fork last year, as well as the American Eventing Championships, so Jordan was very familiar with the track.

“I couldn’t have asked him to be any better. He came out of the box ready to run and felt exactly the same to the last fence,” Jordan said. “Mark always designs such a good course that is galloping, so it’s a perfect course for Capato. He’s run here now three times and the course is similar, so I had a little bit of a leg up on that.” 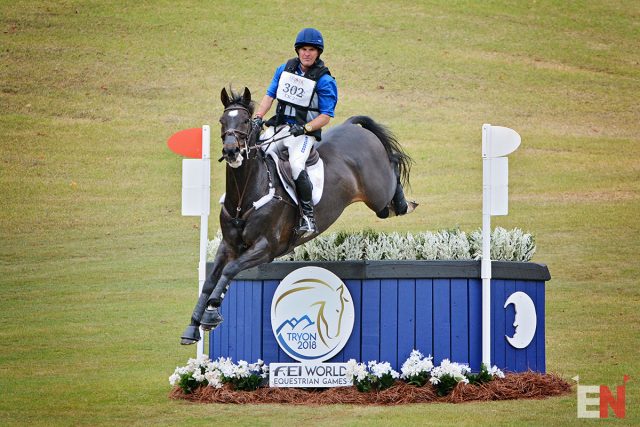 Phillip Dutton gave us a masterclass in cross country riding today, piloting all three of his horses into the top five. I’m Sew Ready, a 14-year-old KWPN (Lupicor X Jarda, by Elcaro) owned by John and Kristine Norton, sat third after dressage and added 3.6 time penalties to remain in third place after cross country on 30.0.

Fernhill Cubalawn, a 14-year-old Irish Sport Horse (Con Capitol X Corse Lawn, by Arkan) owned by Tom Tierney, Simon Roosevelt and Caroline Moran, looked all class in his first run at the level since 2016. “Cuba” added 3.2 time penalties to move from 10th up to fourth place on 31.5.

As for what today revealed about what we can expect for the World Equestrian Games cross country course come September, Phillip said a rideable horse will be key.

“I think it showed today with quite a straightforward course that the time is hard to get,” Phillip said. “You want to be able to ride through the terrain and not be shortening up and helping your horse, so you want a nice, balanced, rideable horse.” 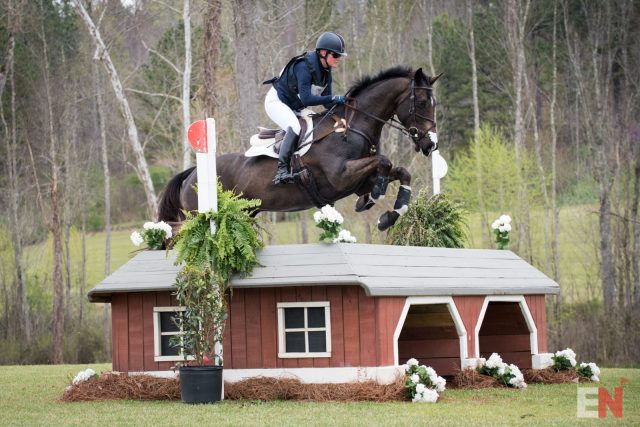 Kim Severson had the confidence-boosting run she was looking for with Cooley Cross Border in his final run before Kentucky. “Cross,” an 11-year-old Irish Sport Horse (Diamond Roller X Whos Diaz, by Osilvis) owned by the Cross Syndicate, added 7.6 time penalties to slip from second after dressage to fifth on 32.1.

Speed queen Katherine Coleman was one of three riders to catch the optimum time of 6 minutes, 16 seconds, which moved her from 20th up to sixth place on 32.4 with Kentucky-bound Longwood, a 16-year-old Irish Sport Horse (Limmerick X Cavale de Or, by Cavalier Royale) owned by KC Eventing Ltd. 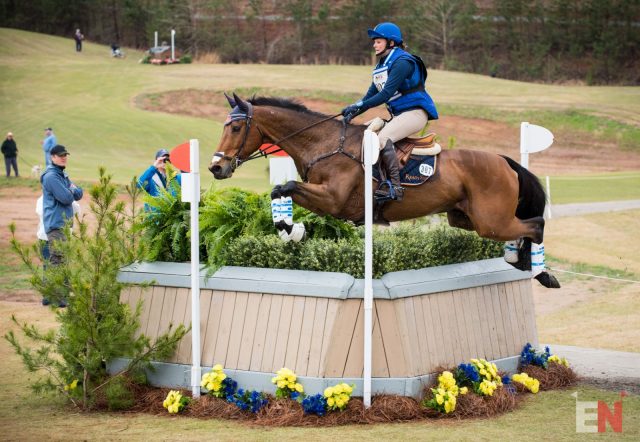 Sharon White rocked around with her own Cooley On Show, adding 3.6 time penalties to move from 11th up to seventh place on 32.9. “Louie,” an 11-year-old Irish Sport Horse (Ricardo Z X Jogantina, by Grand d’Espagne), is another horse in the field using The Fork as a final prep run for Kentucky.

Dressage leader Marilyn Little stuck with her plan to focus on rideability and control with RF Scandalous, a 13-year-old Oldenburg mare (Carry Gold X Richardia, by Lario) owned by Phoebe and Michael Manders and Jacqueline Mars. “Kitty” added 8.8 time penalties to slip to eighth place on 33.0 in her final prep run for Kentucky.

Liz Halliday-Sharp and Deniro Z, a 10-year-old KWPN (Zapatero VDL X Zonne-Trend, by French Buffet xx) owned by the Deniro Syndicate and Ocala Horse Properties, jumped clear with 4.0 time penalties to move from 12th up to ninth on 33.4.

Lisa Marie Fergusson leads the way for Canada after cross country with her own Honor Me. “Tali,” a 12-year-old Welsh Sport Horse (Brynarian Brenin X Dream Contessa), sped around just 2 seconds over the optimum time to move from 23rd up to 10th place on 35.5.

Tim Bourke and Luckaun Quality, a duo renowned for their speed across the country, delivered the fastest rounds of the day — 5 seconds inside the time — to move from 27th up to 13th place on 36.9. 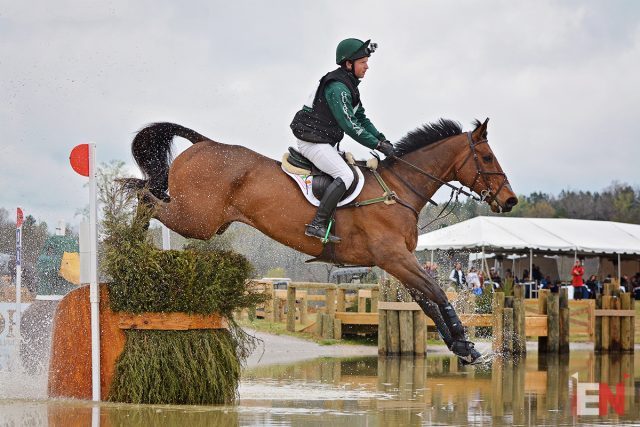 Steady rain overnight made for good going today on cross country, with the riders agreeing the footing was perhaps still a tiny bit firm but significantly improved thanks to the rainfall.

Capt. Mark Phillips’ CIC3* course rode very smoothly overall, with only four pairs having jumping penalties to give us an 89% clear jumping rate.

Colleen Rutledge made the optimum time with Covert Rights but was assessed 50 penalties for missing the flag at the corner at fence 12. She lodged an official inquiry with the ground jury to appeal the penalties, but her inquiry was not successful.

Sam Elsenaar and Banbury Sky were the only pair eliminated on course following three refusals at fence 5b, a triple brush.

Click here to relive all the cross country action in EN’s live updates. Click here for the fence report courtesy of Rechenstelle, the official scoring system of the World Equestrian Games.

Looking ahead to tomorrow’s show jumping finale, Z has only had one rail down in his 11 runs at this levels. Click here to read about the other strong show jumping combinations in the field.

The final horse inspection for the CIC3* is scheduled to take place at 8 a.m. EST tomorrow. Click here for the order for the final inspection. Show jumping will start at 11:15 a.m. EST and will be shown on the live stream at this link.

Stay tuned for much more from The Fork! Go Eventing.