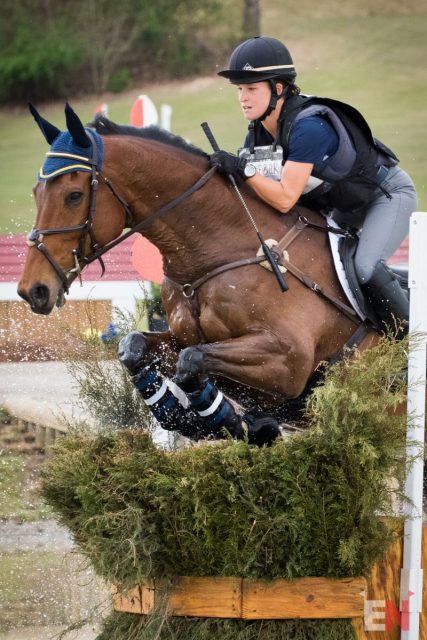 Deep indigo storm clouds loomed on the horizon but ultimately kept their distance from The Fork and WEG Test Event at Tryon today. It made for a cool, overcast day of sport — here’s a roundup of what went down in the Advanced, CIC2* and CIC1* divisions. (Check out our CIC3* report here.)

Whitney Mahloch and Military Mind rose from 6th after dressage into the lead of Advanced Test A after posting the fastest cross country time in either division. Whitney and “Milo” collected just 2.4 time penalties and will advance to show jumping on a score of 33.8.

“We don’t usually worry about the time too much,” Whitney says. “He covers a lot of ground and moves pretty quick, so it’s not usually a big issue for us.”

Whitney, age 27, and Milo have a great story. She has had the now 12-year-old off-track Thoroughbred (Military x Smart Balance, by Beau Genius) since he was 3 and developed him herself. He was bred by the University of Kentucky and pulled off the track after raking in a whopping $140 in three starts; Whitney purchased him for $500 as a sophomore in college from the Thoroughbred Retirement Foundation in Putnam, Indiana. They moved up the levels together and are holding their own at the top of the sport, most recently finishing in the top 10 at Red Hills last month.

“This is my first time here (at TIEC) so I was getting to know the track a little bit,” she says, praising Milo for today’s performance. “He was quite good. Some of those tough corners I added a little stride in there to make sure we were really accurate, but he was great and brave.”

Lynn Symansky occupies the next two spots on the leaderboard with Under Suspection and Donner respectively, who were one-two after dressage but picked up a smidgen of time today. 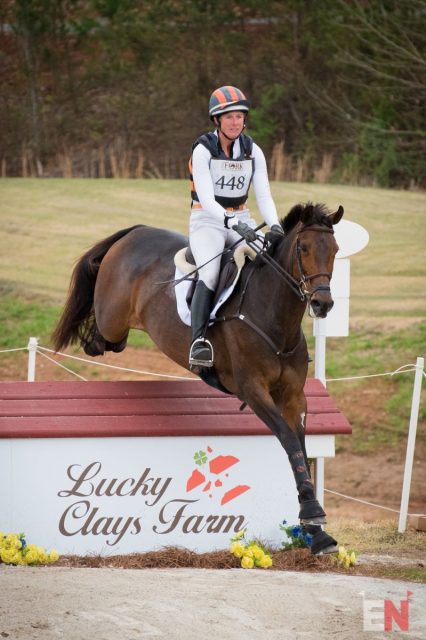 Dressage leader Will Coleman withdrew his two entries, Obos O’Reilly and Boris O’Hara, before cross country, as was his original plan. Lauren Kieffer and Veronica, a 16-year-old Dutch Warmblood mare owned by Team Rebecca, LLC, inherited the lead and held onto it through cross country, picking up 10.8 time penalties.

“It was my first time here so it was all new to me, but both the horses I was on (Veronica in Advanced and Vermiculus in the CIC3*) are quite experienced,” she says. “They’re heading into Kentucky and Badminton so I wanted to be quick and efficient, but it was important to me that they stay rideable.”

Of the course, she says, “Walking it you kind of felt like there were a lot of gallop fences, but you didn’t get to just settle into the gallop with the golf course undulations so that was really good to learn about the course. It thought rode overall quite well, although I think Mark [Phillips] is probably luring us into a false sense of confidence at this point — it’s probably not going to ride like that in September!”

Boyd Martin and Steady Eddie rose from 5th to 2nd; Erin Sylvester and Paddy the Caddy are 3rd.

Boyd Martin was one-two heading into show jumping and he retained both positions, albeit with a reverse of his horses. Contessa moved from 2nd to 1st when On Cue pulled a rail to drop to 2nd. Boyd and Contessa, a 9-year-old Holsteiner mare (Contender x Veritas, by Esteban), are looking for a happy result after the misfortune of a flag penalty in the Red Hill CIC2* last month. Joe Meyer and Buccaneer sit third. 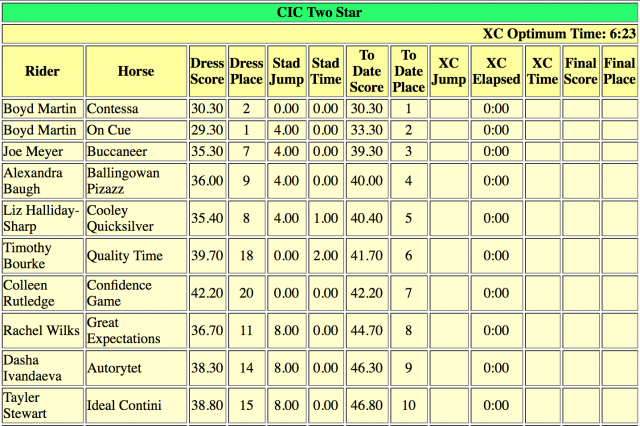 Rebecca Brown and Dassett Choice tiptoed into the CIC1* lead when dressage leader David O’Connor and Cooley Dream pulled a show jumping rail, dropping to 2nd by a tenth of a point. Sara Kozumplik Murphy and Sebastian round out the top three.

Rebecca, of Dallas, Texas, has been to TIEC to coach students at the American Eventing Championships but this is her first time competing here herself. She and “Junior,” her own 9-year-old Dutch Warmblood (Caricello x Vilja, by Hemmingway), turned in a clear round with no time to lead the division on a 29.7.  “Junior is awesome. He is just the best,” she says of her horse, whom she has developed from the Novice through two-star level.

Rebecca and Junior won the CCI2* at Colorado Horse Park last year and placed 2nd in the CIC2* at Texas Rose. This year’s they’ve been traveling east to challenge themselves and up their game. “It’s been kind of a hard transition to East Coast eventing,” she says, explaining that the busy atmosphere of Carolina International got the best of his attention span. “He just needs miles and that’s why we’re here.”

She says tomorrow’s cross country course looks great for her horse, and they’ll be doing their best to hang onto the top spot on the leaderboard. “I’m planning to go fast!” she laughs. “I would really like to beat David — no offense to David.”

Somebody’s got to, Rebecca! We unfortunately didn’t catch any photos of Rebecca, but here’s a video of her dressage test from yesterday: 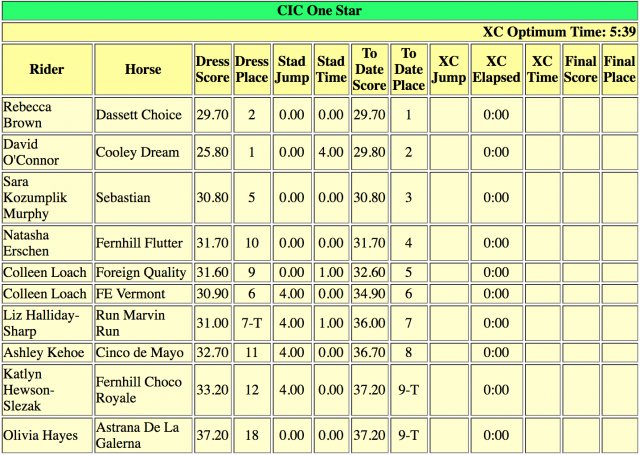