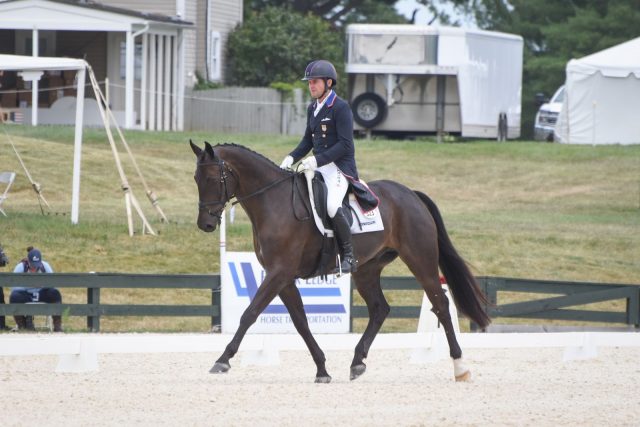 Phillip Dutton is no stranger to the pressures of riding for owners, but he’s got an extra special one to impress this weekend: his stepdaughter Lee Lee Jones. She, her grandmother Annie Jones, and Caroline Moran are the proud owners of the MARS Great Meadow International CCI3*-S dressage leader, Fernhill Pick Pocket.

“Ollie,” the 8-year-old irish Sport Horse (Chacco Blue x Bracklin Mystique, by Solitair), produced the only sub-30 score for the top of the class with a first phase result of 29.8.

“He’s very correct and beautiful mover and does everything well. It actually wasn’t mistake free — we broke in the counter canter, but the exciting part is that he’s going to be pretty spectacular one day when he finally gets a bit more education in him,” he said. “We’re all excited because he’s improving each week and we’re going to take our time. He’s not that mature a horse. Because of Lee Lee’s accident and all that he’s missed a bit of training. But I think he’s going to be a top of the line horse.”

Phillip says Great Meadow is another important stepping stone in the horse’s career, so he’ll be thinking of the future when he heads out on cross country later in the weekend.

“He’s a good jumper, but he gets a bit strong. He’s probably not up to going as fast as I need to at this stage. I don’t want to go fast and lose the rideability of him because I don’t think that’s good long term. I’ll give him a good run, but won’t break any records,” he said.

Lee Lee bought Ollie as a 4-year-old from Carol Gee and produced him up to the training level before her accident in 2016. The following spring, Phillip took over the ride, bringing the horse along slowly and methodically. For a man who rides many, many nice horses it’s hard to miss the twinkle in his eye when he talks about Ollie’s potential.

“He’s a real athlete, and there’s a not a jump too hard for him,” he said. “He’s careful, he can jump a big jump. He’s actually pretty quick on the cross country — it’s mainly the rideability. He’s also naturally really gifted on the flat. Those are all good traits to have.” 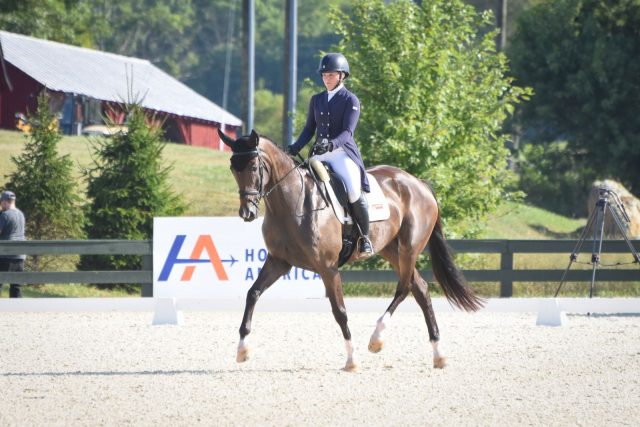 Caitlin Silliman put the polish on to pilot Ally KGO to a personal best International score on 30.2 points for second place.

Morgan McCue produced the 8-year-old Trakehner (Hirtentanz 2 x Annabel Lee, by Butow), who is owned by her Q-Brook Stables, through the training level before handing over the reins to Caitlin. She admits it’s been a “slow climb” up the levels, but with the big picture looming, the mare shone in a big way today.

“I haven’t had her at a big competition, so we’ve been working a lot on her focus and being confident in a big atmosphere. She was very focused in there — lot’s of little mistakes, but nothing huge,” Caitlin said. “It’s been a slow climb up the level, but we’ve got big plans for her. She loves the sport and tries very hard.” 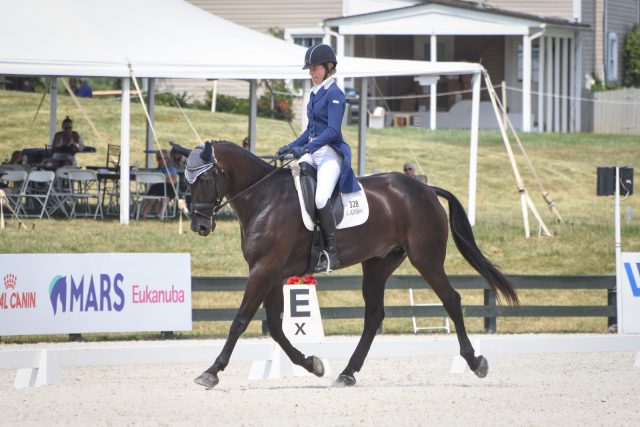 “It was a hot day to be a Black Beauty,” said Valerie Vizcarrondo Pride of her own 11-year-old Oldenburg (French Kiss x Risiko, by Relevant), Favian. This pair also joined the PB club today, earning a 30.8 on the flat for third place.

Valerie, who splits her time between playing judge and competitor, bought the horse from Tamie Smith three years ago, challenging her with an entirely different kind of ride. “I’m used to all of my Ferrari Thoroughbreds. It took me a long time to figure out how to deal with his massive stride. It doesn’t have the Thoroughbred anxiety as an engine so you have to create that,” she said, but today it looked like she cracked the code.

“It was a super accurate test. He was so steady, I could go for everything. I knew he would probably come back easily too — he’s 60% warmblood. The conditions were in my favor today.He didn’t have a whole lot of pizzaz for his trot, but everything was super steady. I’m so proud of him for putting in such a mistake-free test.” she said. 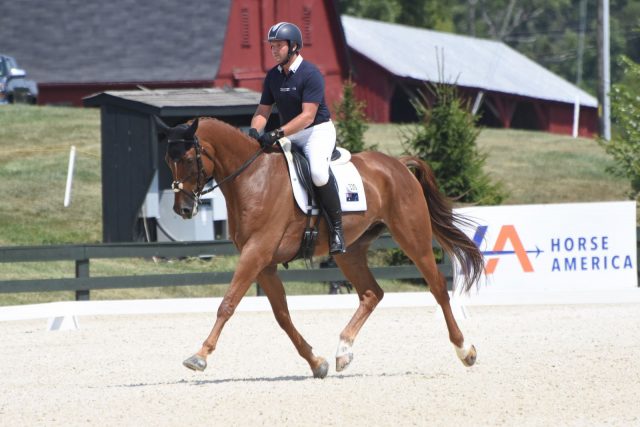 Clayton Fredericks took hold of fourth place with his own FE ColdPlay. He and the 7-year-old German Sport Horse are breathing down the neck of our top three with a current score of 30.9. 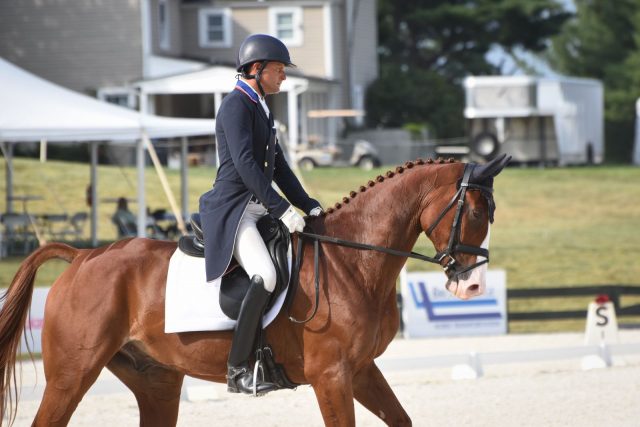 There’s a hot race for 8th place with a three way tie shared between Daniel Clasing & MW Gangster’s Game, Buck Davidson & Electric Lux, and Emily Bradford & The Disco Traveler all on a score of 32.2.

These guys enjoy a day off tomorrow before Saturday’s show jumping.