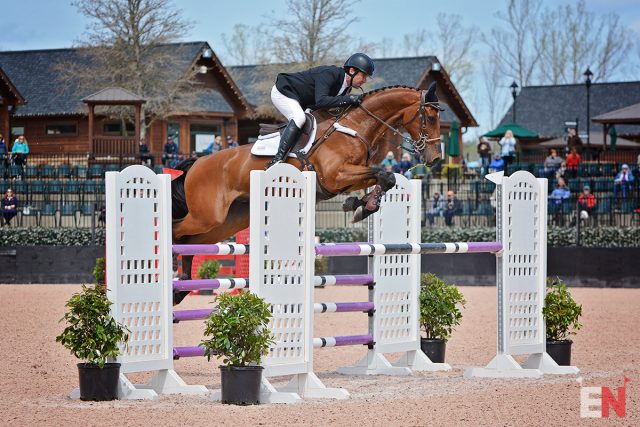 Since stepping up to the Advanced level in 2016, Phillip Dutton’s rising star Z has twice come close to clinching a three-star win and settled for second place — but not today.

As the overnight leader and last horse to go, Z jumped one of seven clear rounds inside the time over Chris Barnard’s show jumping course to take the first international win of his career at The Fork CIC3* on a final score of 28.0 here at Tryon International Equestrian Center.

Phillip and Z, a 10-year-old Zangersheide (Asca X Bellabouche, by Babouche VH Gehucht Z) owned by the Z Partnership, could afford one rail down and still take the win, but the pressure was definitely on with the time allowed of 78 seconds riding very tight.

“There is an advantage of going at the end and realizing the lines you have to take to shave the time. Z is not at his best if I open him up too much to the jumps, so I had to cut the turns and shorten him at the jumps and rock him back a little bit,” Phillip said, adding with a smile — “Everyone said they were worried I would get time, but I didn’t!”

No pairs finished on their dressage score, though Z came the closest, adding just 0.4 cross country time penalties to win on a final score of 28.0, the only finishing score in the 20s. Z will compete in the Advanced combined test later in the week at Fair Hill International Horse Trials in Elkton, Maryland, before going on to contest his first CCI4* at the Land Rover Kentucky Three-Day Event.

“He’s an up-and-coming horse. Trying to help him understand what to do in every phase is my job,” Phillip said. “The cool part for me is getting them to this level and hopefully the next level.” 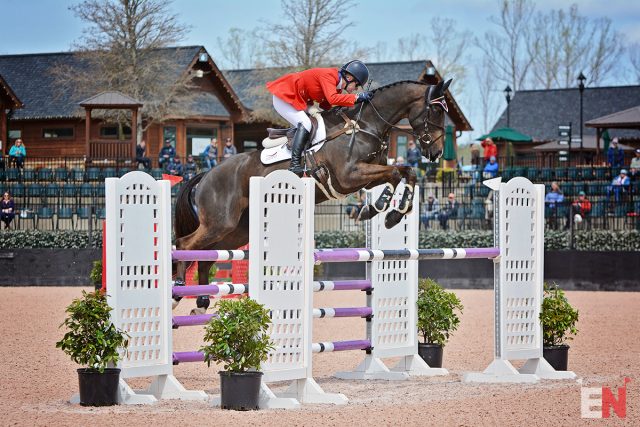 Kim Severson and Cooley Cross Border sat fifth after cross country with a play-it-safe strategy adding 7.6 time penalties, but a fast and clear show jumping round today pushed them back up the leaderboard to finish in second place on 32.1.

“He started out jumping pretty high (on cross country). I was pretty careful. I wanted to make sure I gave him a good ride. He picked up and got better and faster,” Kim said.

“I still get really nervous (in show jumping) thanks to (Tipperary Liadhnan), but Cross is just fun. You just gallop, and he’s going to be good if he can do it.”

“Cross,” an 11-year-old Irish Sport Horse (Diamond Roller X Whos Diaz, by Osilvis) owned by the Cross Syndicate, will now go on to Kentucky looking for his first CCI4* completion.

Sharon White and her own Cooley On Show stalked the leaderboard all weekend, sitting just outside the top 10 after dressage thanks to a personal best test. A clear cross country round with 3.6 time penalties moved “Louie” up to seventh after the second phase, and he added no penalties in show jumping today to scoot up to finish third on a final score of 32.9.

“He’s getting better as he gets stronger. He loves the sport and loves competing, so he’s a good competitor no matter what. My job is not to get in the way and let him be who he wants to be,” Sharon said.

“He really enjoys all phases. His dressage is getting a lot better. Cross country is just fun. He’s got such a good stride and so much scope. He loves it. Show jumping I thought was really interesting; the time was so tight and the scores were so tight. You see it as a challenge and see if you can do it.” 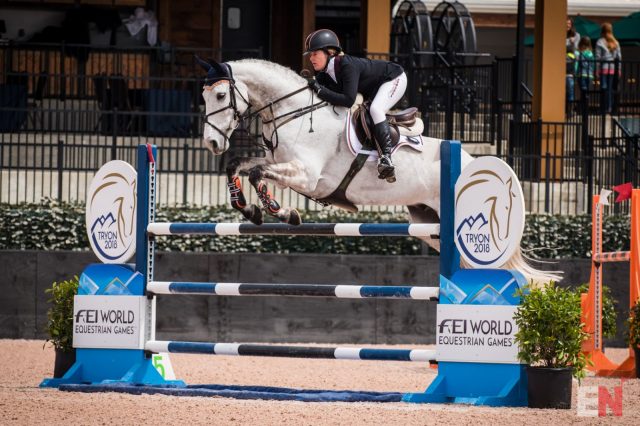 Marilyn Little and RF Scandalous, who won The Fork CIC3* last year and led after dressage, delivered a speedy clear in show jumping to move from eighth after cross country up to finish fourth on a final score of 33.0.

“Kitty,” a 13-year-old Oldenburg mare (Carry Gold X Richardia, by Lario) owned by Phoebe and Michael Manders and Jacqueline Mars, finished fourth in her first CCI4* at Luhmühlen last year and will next go on to her Kentucky debut.

Phillip Dutton and Kentucky-bound I’m Sew Ready, a 14-year-old KWPN (Lupicor X Jarda, by Elcaro) owned by John and Kristine Norton, sat third after cross country and had one rail down in show jumping to finish fifth on final score of 34.0.

Seventeen of 31 pairs (55% of the CIC3* field) added time on the clock in show jumping, and fast and clear rounds resulted in big jumps up the leaderboard.

After impressing with a top-10 finish in his CIC3* debut at Carolina International, Lisa Wall’s Getaway proved once again he’s a serious horse for the future with Doug Payne in the irons. “Flynn,” an 11-year-old Oldenburg by Contendro, jumped a beautiful clear in show jumping to move from 11th after cross country to finish sixth on 35.8.

Lynn Symansky debuted RF Cool Play at the three-star level here at The Fork with an equally impressive result. “Coolio,” a 10-year-old German Sport Horse (Condors Champion X Roxana, by Radscha) owned by the Donner Syndicate, jumped a super clear today to move from 15th after cross country up to finish seventh on 37.0.

Boyd Martin and Christine Turner’s Tsetserleg, an 11-year-old Trakehner (Windfall X Thabana, by Buddenbrock), had one rail down in show jumping to finish eighth on a final score of 40.7 in the horse’s final prep run before making his CCI4* debut at Kentucky.

Liz Halliday-Sharp and Deniro Z, a 10-year-old KWPN (Zapatero VDL X Zonne-Trend, by French Buffet xx) owned by the Deniro Syndicate and Ocala Horse Properties, had two rails down to finish 10th on 79.73. We will next see them in the dressage test ride at Kentucky.

Ariel Grald and Leamore Master Plan were the only other pair in the field to deliver a clear show jumping round inside the time — in their three-star debut no less! “Simon,” a 9-year-old Irish Sport Horse (Master Imp X Ardragh Bash, by Cavalier Royale) finished 20th on a final score of 51.3.