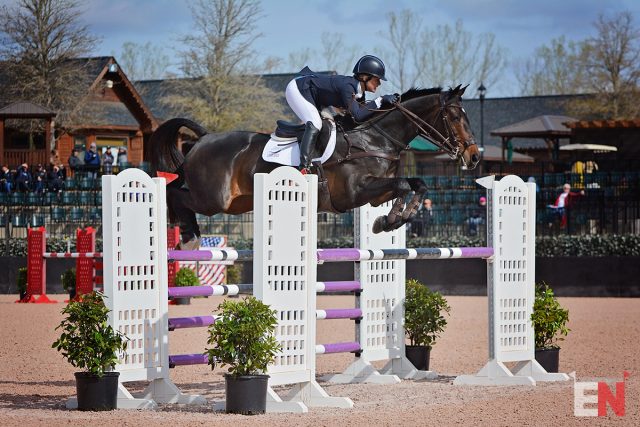 Two boss women, two bay mares, two blue ribbons … the winners are in from two divisions of Advanced here at The Fork at Tryon!

Lynn Symansky and Under Suspection won the dressage, dropped to second after cross country, then show jumped strong today to win the Advanced Test A division. The pair posted a clear round with three time penalties, good enough to send them into the lead following cross country leader Whitney Mahloch and Military Mind’s elimination.

“I’d like to take all the credit but she’s had a lot of amazing work put into her over the years and I get to ride a very nice horse right now,” Lynn says. “She was awesome all weekend, really.”

Coming off a 6th place finish in the Carolina International CIC3* two weeks ago, Lynn had no designs on stepping on the gas cross country here at TIEC: “I didn’t want to go crazy quick on her; it’s just another opportunity for me to get to know her before she heads to a CCI3*.”

Today, Lynn says, “she jumped her heart out,” and they’ll next head to the Jersey Fresh CCI3* or, plan B, Bromont CCI3* with confidence, while continuing to develop their partnership. “There are more points to be had in the dressage for sure,” Lynn says. “On cross country she’s strong, she’s a really long horse so she likes to be a bit low, so that’s a different ride for me. I’m usually on more Thoroughbred-y types … so it’s been a little bit of an adjustment for me to figure out how to shave seconds off.”

Show jumping time was tough to make and Pippy picked up three penalties, but Lynn says the mare jumped her heart out. Lynn also finished 3rd on Donner, with whom she’ll contest Kentucky later this month, and was 7th in the CIC3* with RF Cool Play. Leslie Law was 2nd on Voltaire de Tre on a score of 38.6. 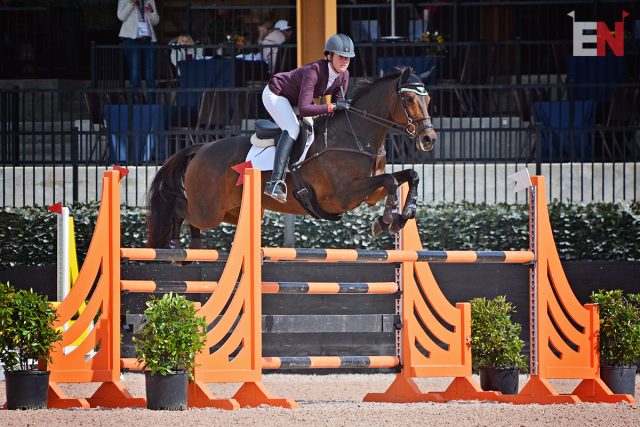 Lauren Kieffer and Veronica, a 16-year-old Dutch Warmblood mare owned by Team Rebecca, LLC, picked up a blue ribbon here at TIEC after turning in a clear round with no time in the Advanced Test B division. After inheriting the top leaderboard spot from dressage leaders Will Coleman and Obos O’Reilly, who withdrew his horses after the first phase, the pair hung onto 1st through cross country yesterday and then show jumping today.

“She was really good in there,” Lauren says. “In the past we’ve had the odd time penalty, so especially with the time being tight the goal is to make smart turns and be quick, so I was really happy with that.”

Veronica has performed on some of the biggest eventing stages in the world — Kentucky, Badminton, Burghley, Pau — and started out slightly underwhelmed on this quiet morning at TIEC. “She’s got a ton of experience in the rings, and funnily enough courses like this are the harder ones on her because there’s actually not a ton of atmosphere. She can get a bit blasé now that she’s been around so much, so she was a little tappy in the beginning but then she woke up again. She felt great today and she certainly doesn’t feel like she’s 16 … nobody has told her that!”

The veteran pair is heading across the pond to contest Badminton May 2-6, where they’re aiming to improve upon their top 20 finish from last year. Between now and then, they’ll focus on polishing their dressage, sharpening their show jumping with the help of Scott Keach, and ticking the final fitness boxes. “Same with Lynn and Donner, you know what works to peak them at the right time,” Lauren says.

Lauren has two horses entered at Kentucky, Landmark’s Monte Carlo and Vermiculus, and thought three might be overextending it. Veronica, being the most experienced of the lot, earned the ticket abroad. “Also I’d like another crack at Badminton with her, too, hoping for the same kind of dressage and clear but faster now that I know the course … You’ve got to be competitive anywhere, not just the U.S., so we’ll go have a crack at it.”

Leslie Law and The Apprentice, whom Leslie is keeping tuned up while Caroline Martin recovers from a foot injury sustained at Carolina, finish 2nd on a score of 47.0; Boyd Martin and Steady Eddie were close on their heels, finishing 3rd just a tenth of a point behind. 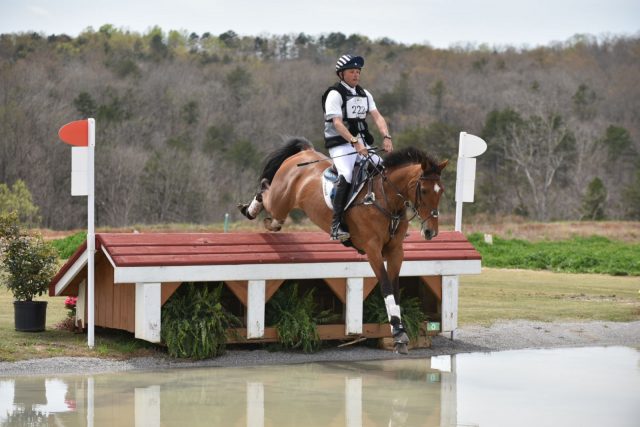 Boyd Martin and On Cue finished 3rd in the CIC2*. Photo by Leslie Threlkeld.

The clock has played a determining factor here at TIEC, both in cross country and show jumping, across all divisions. For quick horses and efficient, gutsy riders, that could translate to a big jump up the scoreboard throughout the weekend. Both winners of the CIC2* and CIC1* were hovering just inside the top 10 after dressage and steadily climbed their way up the top.

In the CIC2*, Alexandra Baugh and Ballingowan Pizazz, a 16-year-old Irish Sport Horse (Obos Quality x Rocklea, by Leabeg), moved from 9th after dressage to 4th after show jumping and then into the lead today, having collected just 0.4 time penalties. Boyd Martin, in 1st and 2nd heading into cross country with Contessa and On Cue respectively, dropped to 3rd and 4th; Tim Bourke and Quality Time posted another big jump in the placings, from 18th after dressage to 2nd overall.

In the CIC1*, Natasha Erschen and Fernhill Flutter, a 16-year-old Irish Sport Horse (Puissance x Warrior Queen, by Euphemism) flew from 10th to 1st, adding just 2.8 time penalties to their dressage score. Ashley Kehoe and Cinco de Mayo were 2nd on a 26.7; Sara Kozumplik Murphy and Sebastian were 3rd, just a tenth of a point behind.

Besides both being 16-year-old ISHs, both Ballingowan Pizazz and Fernhill Flutter have accomplished upper-level resumes before moving on to teach young riders the ropes. The former went to the 2011 Pan American Games in Guadalajara with Shannon Lilley and was campaigned at the three-star level with Michael Pollard; the latter competed through the four-star level with Kevin Keane. 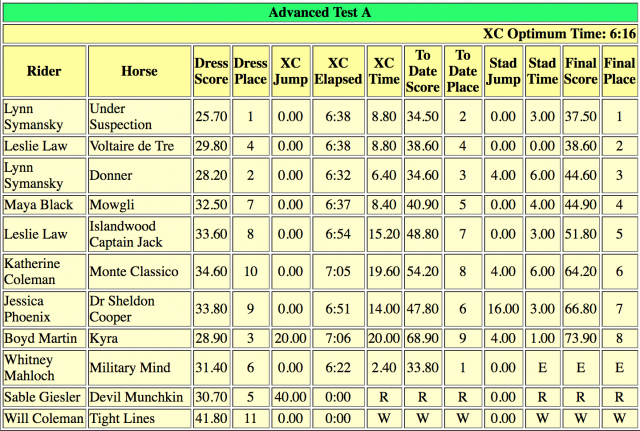 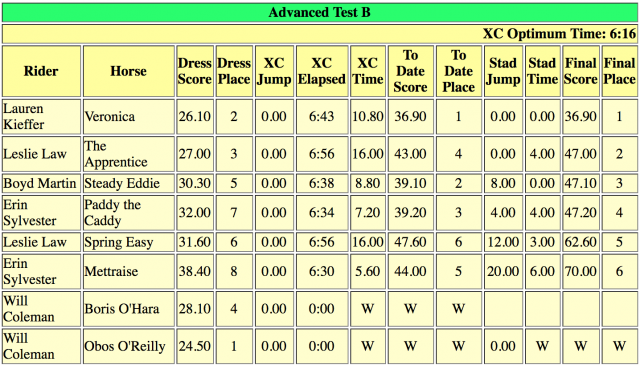 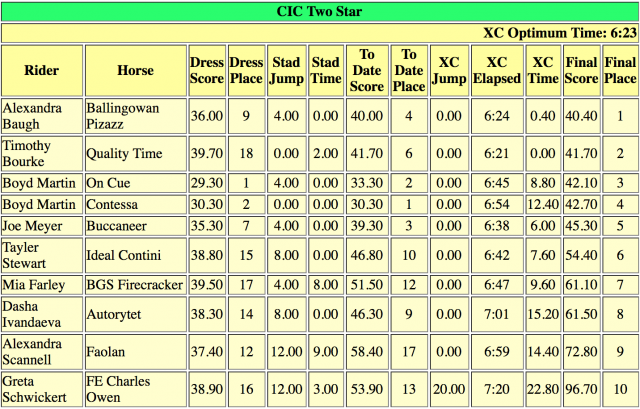