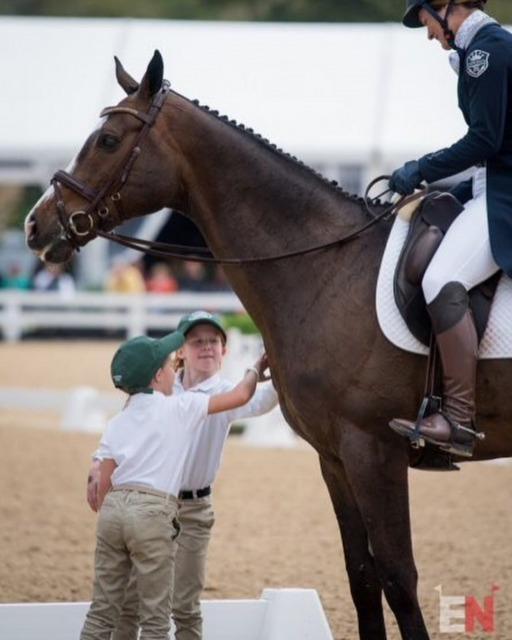 Leah Lang-Gluscic thanked the Pony Clubbers for volunteering and let them give AP Prime a pat after his dressage test. Photo by Leslie Threlkeld. 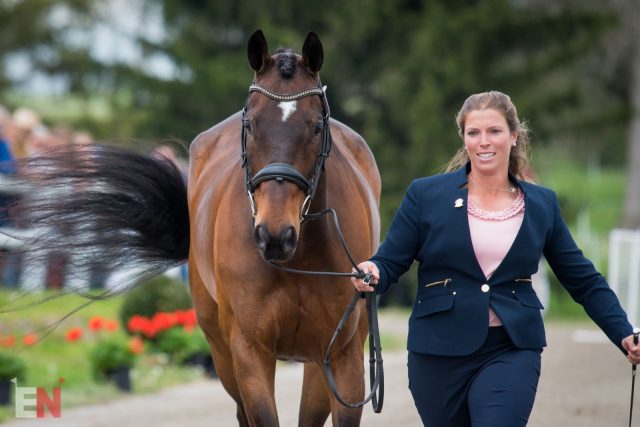 Ellen Doughty-Hume wore her alumni pin throughout the event. Photo by Leslie Threlkeld.

And that’s just the tip of the iceberg! Pony Club alumni are everywhere. They walk among us, disguised as humans, identifiable by their superhuman bandaging skills, freak knowledge of obscure equine trivia and legendary horse management neuroses. Not sure if you’re in the presence of an alum? Hang a water bucket in front of them with the snaps facing outward. If they start twitching, they’re in the Club. As this USPC Blog blog post puts it: “Regardless of your level or how many years you spent in the organization; once a Pony Club Member, always a Pony Club Member!”

Not every Pony Club grad goes on to become a four-star rider, but the organization is known for instilling within its membership a number of healthy, hard-won qualities: discipline, work ethic, focus, drive and myriad other character traits that contribute to a lifetime of success in the equestrian realm and beyond.

The USPC’s Pin Promise campaign makes it a little easier to give credit where credit is due. Launched in 2012 and Macy Carman, former Chair of Pony Club’s National Youth Board, it’s an initiative encouraging members, volunteers and alumni to wear their Pony Club pins outside of USPC affiliated functions, mirroring the impact that Pony Club has had on many members’ lives.

When you wear your pin, you are reminding others that Pony Club is one stepping stone to success in the equestrian community. Wearing your pin can inspire a D3 Pony Club Member watching at a local jumper show, or the thousands watching a former Pony Club member gallop by at Kentucky. 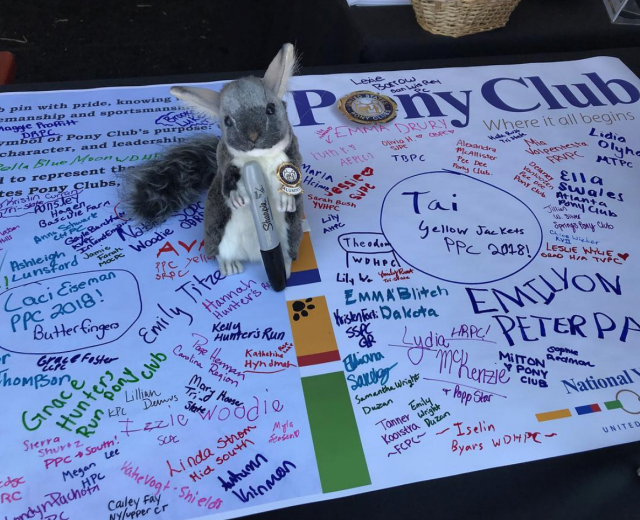 Chinch stopped by the Stop by the United States Pony Club booth in the Sponsor Village to sign the Pin Pledge banner. Photo by Leslie Wylie.

The Pin Promise was one of many irons Pony Club had in the fire at this year’s event. There were Keeneland Pony Club Quadrille and Pas de Deux demonstrations in the Walnut Ring, a Shapley’s grooming demo and autograph signing with Emma Ford in the Pony Club boot, and member-only course walks with designers Guilherme Jorge for the CSI3* Grand Prix course and with Richard Jeffery (a Pony Club grad!) for the CCI4*.

There was a Celebrity Games Challenge, and the annual Prince Philip Cup Games were fierce as usual! The four teams were the MidSouth Region Picks, Sunshine Region Butterfingers, Sunshine Region Yellow Jackets and an Eastern Pennsylvania/Old Dominion/Tri-State Region Mix Team called Switch Blade. 2018 marks the competition’s 18th consecutive year it has been hosted during Kentucky.

We were happy to meet the two recipients of the 2018 USPC Media Internship, who joined two returning interns for this year’s event. The crew: Brynn Hawley (Delaware PC), Isabel Brunker (Keeneland PC), Allison Bailey (Delaware PC), and Kaila McCormack (Metamora Hunt II PC). During a tour of the media center, we interviewed THEM about their internship experience — sounds like it’s been a fun and educational one!