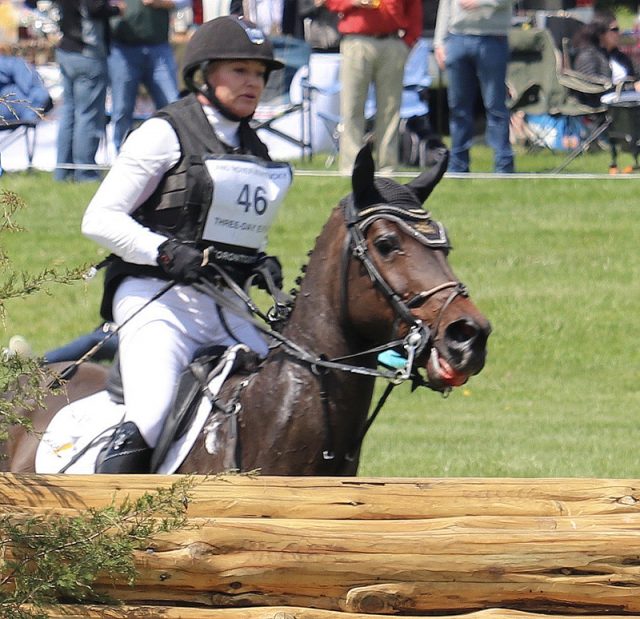 Blood visible on RF Scandalous’ mouth at fence 4A at the Frog Pond at Kentucky 2018. Photo by Erin Harty/Retired Racehorse Project.

Marilyn Little released a statement today in response to the public outcry on social media following the blood visible in RF Scandalous’ mouth during the cross country phase of the 2018 Land Rover Kentucky Three-Day Event in Lexington, Kentucky.

“First, I want to offer my sincere regret for the negative attention this has brought to the horses and sport that we all love, as well as the pressure that is being put on my personal sponsors. I could never achieve any success in this sport without my horses, my incredible support team, the people who make this sport great, and the sponsors who help me along the way.

“I tried my very best to be transparent in every possible way in Kentucky and followed our sport’s protocol in the best interest of my horse. My horse was checked multiple times by FEI officials before the start of cross country, again at the finish, and at the second horse inspection on Sunday morning, and at all times was passed fit to continue.

“I believe very deeply in following the rules our sport has in place and am beyond devastated by the comments and negative perception of how my horses are cared for. I love my horses very, very much and their happiness and wellbeing mean the world to me. I want to personally thank the officials doing their jobs to keep our sport fair and safe, as well as my sponsors and those who have stood by me at this time.”

Marilyn and RF Scandalous, a 13-year-old Oldenburg mare (Carry Gold X Richardia, by Lario) owned by Phoebe and Michael Manders and Jacqueline Mars, led at Kentucky after dressage on 24.8 and added 8.0 time penalties on cross country.

Marilyn told EN that her groom, Katie Madruga, noticed the mare had cut her lip in cross country warm-up prior to leaving the startbox.

“I said, ‘I absolutely do not want to go out on course unless she’s 100% OK.’ We called for the vet, Duncan Peters, who immediately came over. He said, ‘Yes, it’s just a cut on the outside of her lip. It has nothing to do with the bridle.’ Her bit is wrapped in rubber, so he notified the official veterinary delegate and contacted the ground jury and the stewards. Everybody said, ‘It’s OK to compete; she’s OK.’ And it looked like the bleeding was subsiding. I left the startbox thinking all protocols had been followed and the boxes were checked and that she was OK to compete.

“She tripped on the landing from number three — perhaps that had something to do with why (the bleeding) restarted, but we also know with adrenaline and her heart beating faster, things can happen. It was very obvious from the photos that it was more on the right side, and it had nothing to do with the bit. She just bit her lip. Then, of course, the (vet) came and checked her at the finish … I’m really devastated that it happened, but I’m really glad that people were there to get it checked out.”

The FEI rule that governs blood on horses on cross country is as follows:

526.4 Blood on Horses
Blood on Horses must be reviewed case by case by the Ground Jury. Not all cases of blood will lead to elimination. In minor cases of blood in the mouth, such as where a Horse appears to have bitten its tongue or lip, or minor bleeding,  after investigation in consultation with the Veterinarian, the Ground Jury may authorise the Athlete to continue. The cases indicating Abuse of Horse will be dealt with according to the provision of Art. 526.2 (Abuse of Horse – Warnings and Penalties).

FEI officials released the following statement on the incident at Kentucky: “At the warm-up Marilyn and the groom went to official veterinarian Duncan Peters to have it checked because there had been some blood that was wiped clean. The vet noticed a small cut inside the lip away from the bit. It had stopped bleeding, which said to the vet that the horse had bitten herself. The bleeding stopped, the ground jury was informed, and there was no report of blood at the finish.”

Blood is visible in photos of the horse on course, and photos also show the mare’s mouth being wiped clean with a red towel after finishing the course and prior to being examined by a vet at the finish.

In response to the towel being used at the finish, Marilyn told EN: “Our sport is under a microscope, and we knew that bottom (lip) did have a cut when she left the start box, that although it had been cleared, it still did exist, and so (Katie) was just there ready just because you should.

“I’m not any different from anybody else that has a team of people there wanting to do everything they can for the horse. I do feel I am under a microscope, and that’s fair. I want everybody to see that I try to do the best for my horses, and I am 100% on board with them knowing everything they need to, so they feel comfortable, too.”

This is not the first time we have seen Marilyn and RF Scandalous win a USEF National Championship amidst controversy. Blood was visible on the mare’s mouth on cross country at the 2016 Dutta Corp Fair Hill International CCI3*, which she won to be named the 2016 Dutta Corp/USEF CCI3* National Champion. Marilyn also faced controversy at Fair Hill CCI3* the prior year in 2015, when blood was visible on RF West Indie’s mouth on cross country.

This article has been updated with additional quotes from Marilyn Little.