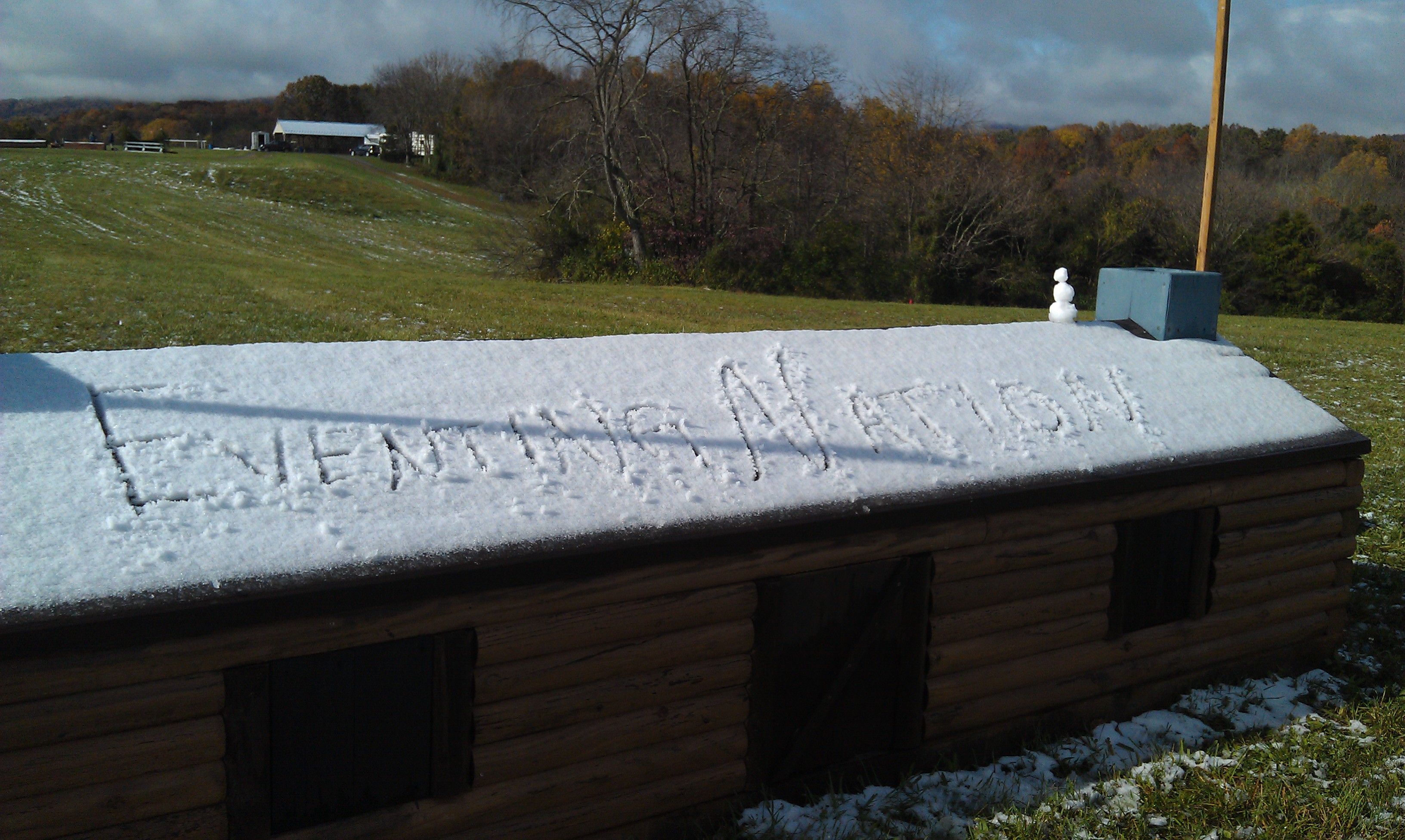 How many of you know how to cook? Where did you learn to cook? Have you ever had a big fire in the kitchen? Well ladies and gentleman, I have created my first kitchen fire- via bacon grease. This was a moment I was not prepared for. In fact, I didn’t even realize the oven was on fire. If it weren’t for EN’s own, Ali, this could have been a lot worse. OK, well I would have realized eventually. So what did I do in this moment of panic? Called the first number I could think of that could tell me what to do- my mom. A few seconds later, and a big mess of baking soda, the kitchen was saved. The best part? The bacon wasn’t burnt and it was still edible! Let this be a lesson to you all, watch bacon grease. And always, always use a pan with sides.
Holly Hill (LA) — [Website]
Chattahoochee Hills (GA) — [Live Scores, Ride Times]
The Virginia HT — [Website]
Briar Fox Fall HT (KS) — [Website]
ESDCTA New Jersey HT — [Times/Scores]
Despite the snow in Virginia, the HT went on. In the OI, Philip Dutton took the win. The SJ at VAHT proved to be a tough one. The coliseum is always a tough place to jump. This weekend was no different. The rails were flying. In the OI there were only two clean rounds, several four faulters and many twenty faulters. In the IR, Arden Wildasen took the win with eight faults in the SJ and a clean XC. Looking through the prelim sections, the rails didn’t stay in the cups much easier. Clean rounds were few and far between. So for those who did jump clean, you should be pretty excited! [scores]
Heading a bit further south, and to a bit warmer weather, Georgia hosted a lovely event. This weekend saw the second to last CCI** of the season at Chattahoochee Hills. Buck Davidson lead on The Apprentice from start to finish. With only one rail in the SJ and a double clean XC, this is proving to be a real horse of the future. Following six points behind, in second, was Leslie Law and Zenith ISF. Bringing out the top three was Jennie Brannigan and No Objection (finishing on their dressage score). In the CIC*, Arianna Almeida took the win. Mary Bess Sigman followed taking second and third.
Ear bonnets. A thing of style. Now, competing with an ear bonnet is just something you seem to “do.” But gone are the days of the plain and simple bonnets. Now these ear hats have to have style. A sense of individuality. What better place to look for style than the jumper world. [Washington International]
Donna Smith has won the CIC*** at the Woodhill Sands HT in NZ. Smith led from start to finish. This win has pushed Smith into the Bell Tea Super League series. [A win for Smith]
Horse Tip Daily from ECOGOLD: Pro grooms on toilet seats
October’s Finest in Kentucky
Check out these tips for saving your $$$ in the winter months:
Go HERE for more details!
Check out Heath Ryan in the Grand Prix Freestyle:
Have a great start to the week. We will be bringing you all the coverage from Galway Downs Three Day Event this week. So stayed glued to your seat. Go Eventing.