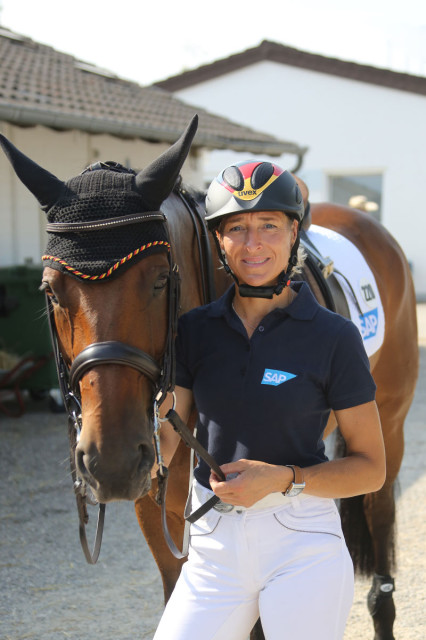 Germany, which has historically dominated at Aachen, once again boasted a powerhouse roster of entries for the 2016 CICO3*. With the country’s Olympic team still up in the air (you can view the long list here) everyone fought to deliver a commanding performance to either confirm or sway the selector’s minds. And deliver they did, with four German horses in the top ten, and six in the top twenty.

Her potential Olympic partner has an impressive resume, including a second place finish at Badminton in 2014 and a win at Pau the year before that, among many other top finishes at the three-star level.

Despite being a fierce competitor, Ingrid always keep both feet on the ground and this week at Aachen was no exception. In addition to the eventing competition, she is moonlighting in small tour dressage, performed a pas de deux exhibition with her brother Michael, and even her daughter Greta is participating in the festivities. CHIO Aachen sat down with Ingrid on the eve of the eventing competition start and kindly shared with us this interview.

This year the CHIO Aachen is a real family outing for you.

You can certainly say that again. It is great that my daughter Greta can be here, since the vacations have already started. This is the second time she has taken part in the Opening Ceremony and, of course, she considered it to be a huge honour to be able to make an appearance as Pippi Longstocking this year to match the partner country Sweden. I was even really nervous myself! And it was a fantastic Opening Ceremony, I am still blown away. Impressive!

Aged just 12 your daughter is already a successful rider. Does she take after her mama?

I think she rides more carefully than I do. But in any case she has the same enthusiasm and enjoys riding as much as I do. And that is the most important thing!

Back to you. What expectations have you brought with you to Aachen?

For me Aachen is the last trial before the Olympic Games in Rio de Janeiro. So, of course, I am trying to keep Hale Bob in top form and will try to put in the performance possible with him in Aachen. We are currently working on a lot of fine details, but I can already say: He is in fantastic form! It is also great that my horse Escada can be here, which my main sponsor SAP made possible. So, I simply can’t wait for the show weekend to begin!

A victory with the team is no doubt the main aim.

That is definitely possible. We have won many times with the team in Aachen already. However, we never come to Aachen with the attitude that we are going to put in a relaxed round. We know that we have to do our very best to have a chance of taking the team title here in this demanding competition.

If this succeeds you can let the wave of motivation carry you to Rio.

Yes, if I am ultimately on the team, certainly. Because in Aachen top conditions are offered, for instance the stadiums, the huge jumping arena. This is of course also a unique atmosphere for the horses too, before they continue on to a championship show.

You are not only competing in the “DHL Prize” at the CHIO Aachen.

Yes, that is right. I also brought the beautiful 8-year-old chestnut mare Geraldine with me to Aachen. I am very pleased after our first performance in the Prize of VUV, even if there is still some room for improvement, naturally. Also on board: My Trakehner gelding Parmenides,  an eventing horse that I have also won the odd advanced jumping class with too. I will be riding him on Saturday evening in the new competition, the “Lavazza Prize.”

A show competition that brings showjumpers, drivers and eventers together … What do you think of it?

I think it is fantastic that eventing was integrated into the CHIO Aachen in 2006 as a fixed discipline. And in my opinion the high attendance figures speak for themselves. There are always loads of spectators on the cross-country day and they really cheer us on. At the end when you ride into the Main Stadium, you are greeted by this incredible atmosphere that is unique worldwide. If another spectacular competition is added to the programme, it is simply wonderful for us eventers!

Congratulations to Ingrid on fulfilling her goals and making an unbreakable argument to be included on the German Eventing Team this weekend at Aachen!