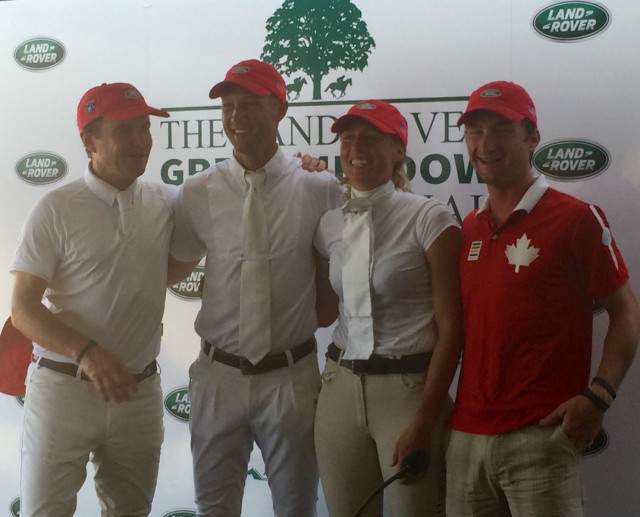 Great Meadow leader Clark Montgomery attended this evening’s press conference along with Phillip Dutton, Waylon Roberts and Jodie Amos, who all spoke on behalf of their respective Nations Cups teams, to chat about the day and their expectations for Mike Etherington-Smith’s cross country course tomorrow. Read on for what they had to say.

Jodie: “From our point of view having a couple of fences as an option it not something we’re particularly used to, and I think people tend to jump a similar route, but I think the course rode really well. It was a really interesting course, up to height and certainly having the footing was incredible. I think the horses jumped really well.”

Phillip: “I think everyone loves to ride Marc’s courses. It is a thinking course, and he’s doing a lot of them over here for us now. It’s exciting for us to have a course designer like Marc who’s still young but prepared to try things. Sometimes they don’t work perfectly, but I think everybody thought it was a good education for the riders and horses.”

On riding as part of a team

Waylon: “It changes the way you approach the competition. We’re so used to competing against one another that it’s a real treat to be able to come together and work together and go forward as a unit. It’s a special thing, and I look forward to hopefully being on more teams here in North America.”

Jodie: “We met Justine for the first time this week, and it’s worked out really well. At a competition usually you’re there as an individual, and the whole team ethic is something that’s really nice to be part of. You go into it thinking a little bit differently. Certainly in our group we’ve got a really, really nice bunch of people, and everyone’s very supportive of each other, so we all come up and watch each person do their test and jump.”

Phillip: “Obviously it is more of an individual sport, and the way I look at it is if you’re doing the best for yourself, you’re going to be doing the best for your team, so to me it doesn’t change too much. But like these guys have said, it’s kind of fun having everyone else around. We’re all aiming for the same goal. When you’re on the team everyone wants you to do well, so the camaraderie that we’ve got in this group — I think we spur each other on for greater things each day.”

Phillip: “The course looks nice. It’s very inviting — good, solid, big jumps, which is pretty appropriate for the horses going to the Olympics. The first part of the footing is great. It’s not so great out on the back on this newer ground, but I’ve seen the water trucks out there and hopefully that’s going to improve for tomorrow. I think Mike has done a good job of making it a good experience for the horses without over-taxing them for the big event they’ve got in a few weeks.”

Clark: ”I think the first water looks a little bit tricky just because it doesn’t really look like a water, so you probably have to ride the horses a bit strong to get in … I think the corners in the arena could cause a problem, especially if you’re trying to be fast. You could easily glance off there. (Click here to preview the fences on the course.)

“Then the drop down to the triple brush — you’re going to have to make sure to be really good on your four strides because if your horse jumps off too big and you end up on three and a half, then you’re just asking for a run out. It’s the same if you just pop off too quiet and get there in four and a half, so I think it’s important to make sure you’re on the right stride. I think the rest is quite fair but big enough, and it should be a fun course to ride.”

Jodie: “I think not having ridden here before it’s lovely to come out and have a really nice galloping track. It’s beautifully presented: nice big, bold fences. There’s a few places where you could easily get caught out, but on the whole it’s a really nice course, and it’s so lovely to come over and have that to ride round.”

Waylon: “I haven’t been able to ride round too many of Mike E-S’s courses, but I’m definitely looking forward to tomorrow and I imagine for the horses heading off to Rio it’s going to be a good final prep.”