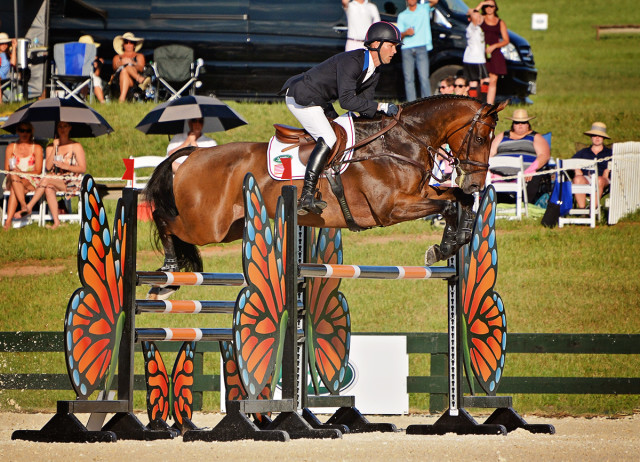 It’s hot hot hot here at the Land Rover Great Meadow International, and U.S. Olympic team members Clark Montgomery and Loughan Glen are on fire, jumping a super clear round over Marc Donovan’s show jumping course to hold the lead in the inaugural U.S. Nations Cup leg on their dressage score of 36.3.

Clark said earlier in the day that he is definitely feeling pressure to deliver a top performance, and he echoed that same sentiment in the press conference following show jumping. But if he can deliver two top phases despite battling nerves, we say bring on the pressure! It’s definitely good practice ahead of Rio.

“I’ve been feeling more nervous about riding at this event in front of you guys than about any of my past ones, but he went in and jumped great,” Clark said. “It helps to have an arena like this and footing like this. It’s just amazing, especially coming from England, where we’re always on grass and terrain, which can be fun sometimes, but if you get weather it can be quite difficult. I couldn’t be happier to be where I am right now.” 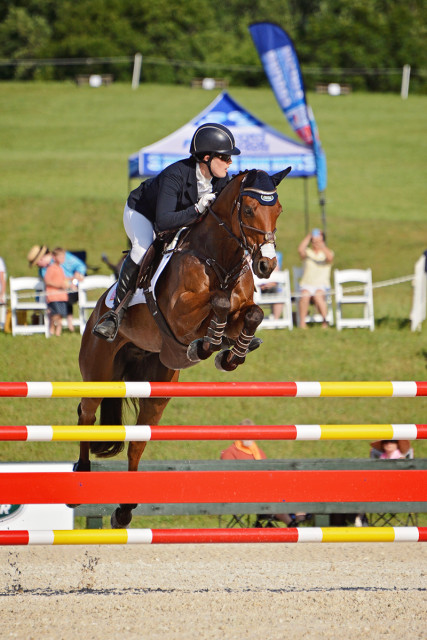 The top seven combinations after dressage retained their positions on the leaderboard thanks to jumping clear rounds inside the time. Eighteen of the 40 pairs in the competition went double clear, which is 45 percent of the field.

Maya Black and Jon and Dawn Dofelmier’s Doesn’t Play Fair, the traveling reserve combination for the U.S. Olympic team, remained in second on 41.4 with a lovely clear round. Lauren Kieffer and her U.S. Olympic team mount Team Rebecca’s Veronica jumped their sixth consecutive clear FEI show jumping round to hold third place on 43.7. 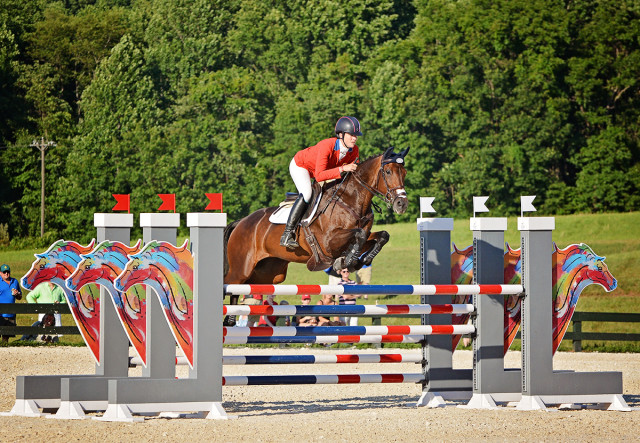 Marilyn Little and RF Demeter, owned by Jacqueline Mars, Raylyn Farms and Patrick Witte, are hot on Lauren’s heels, with a clear show jumping round keeping them in fourth place and just 0.1 penalties out of the top three. Jessica Phoenix and Don Good’s Bentley’s Best maintained their spot as the top Canadian pair on the leaderboard with a clear round to hold fifth on 44.1.

Phillip Dutton had one rail down on his Olympic mount Fernhill Cubalawn but jumped clear rounds with Tom Tierney and Annie Jones’ Fernhill Fugitive and HND Group’s Mighty Nice to keep two rides in the top 10. Fernhill Fugitive, who is competing on the U.S. Nations Cup team, sits in equal sixth on 47.2, with Mighty Nice in ninth on 47.9. 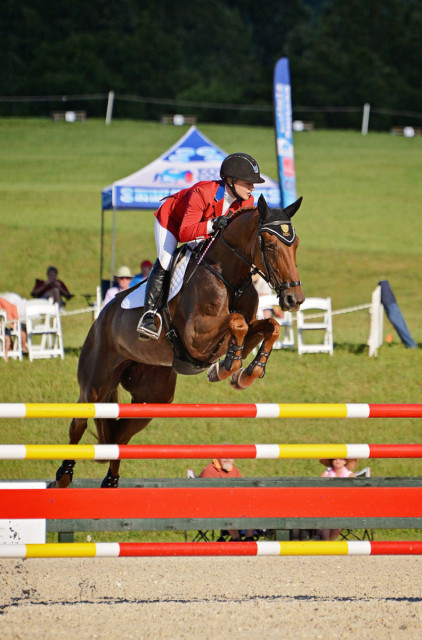 Holly Payne Caravella and Beth Groblewski’s Santino continue to lead the off-track Thoroughbred charge at Great Meadow, jumping a cracking clear to remain tied for sixth place on 47.2. The 13-year-old gelding is competing in his first major competition since the Rolex Kentucky Three-Day Event in April, where he completed his first CCI4*.

Boyd Martin and his Olympic mount, the Blackfoot Mystery Syndicate’s Blackfoot Mystery, delivered yet another strong phase today, jumping clear and moving up to eighth on their dressage score of  47.7. His reserve horse for Rio and Nations Cup mount, Craig and Gloria Callen’s Welcome Shadow, also jumped clear and inside the time and moved into the top 10 on her dressage score of 48.8. 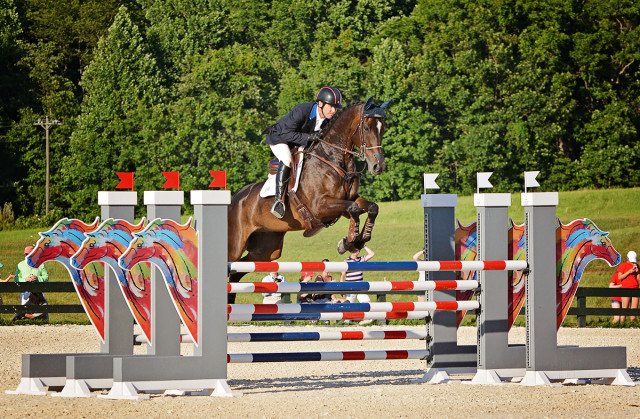 Time penalties definitely proved costly, with just a handful of penalties knocking some riders well down the leaderboard. Emily Beshear and Deep Purple Eventing’s Shame on the Moon jumped a fluid clear round, but 2 time penalties bumped them down five spots on the leaderboard to 13th. Eight riders in all exceeded the optimum time of 90 seconds. 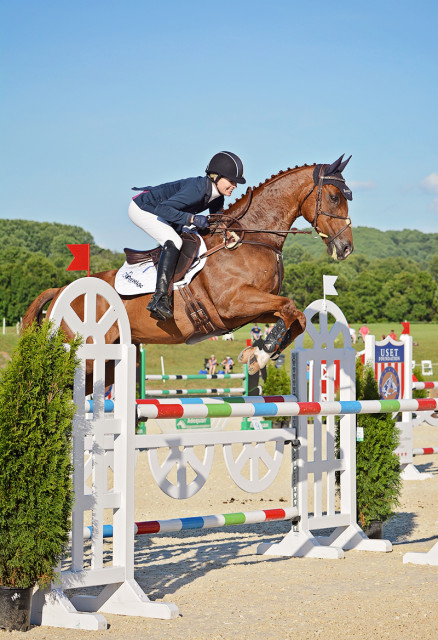 Phillip Dutton, Waylon Roberts and Jodie Amos spoke in the press conference following show jumping as representatives of their respective Nations Cup teams, and they said what we’ve ball been thinking: Great Meadow has truly rolled out the red carpet for a world class competition. Even with high temperatures making for a sweltering afternoon, a huge numbers of spectators packed the grounds to enjoy the day.

“You all can see what a great thing it is with the great location, and hats off to everybody who’s put this together in such a short time,” Phillip said. “It’s exciting for us to have some visitors come this way. Usually we have to go over to Europe to compete and ride, so thanks to the British for coming over and supporting this. I think it can only bigger and better, and it’s great for the sport. I think we should all get behind this event and encourage them to keep going.” 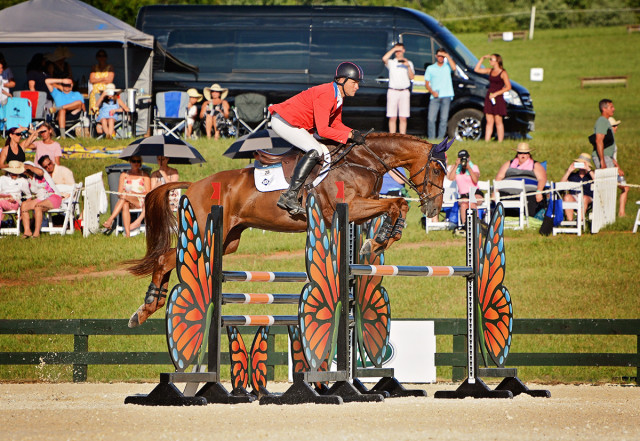 Waylon agreed: “It’s a real privilege, and I think it’s a world-class event. It’s a beautiful venue, and they’re really putting the effort in to bringing North American eventing up to an international standard. I know that me and my fellow Canadians are really pleased to be here and looking forward to riding round Mike’s course tomorrow. I think it’s going to be something special for the future.”

Jodie Amos and Nicola Coates’ Wise Crack are sitting in 11th place as the highest placed British pair on their dressage score of 49.0 after jumping a classy clear round, and she said it’s an honor for their team to be competing in the U.S. 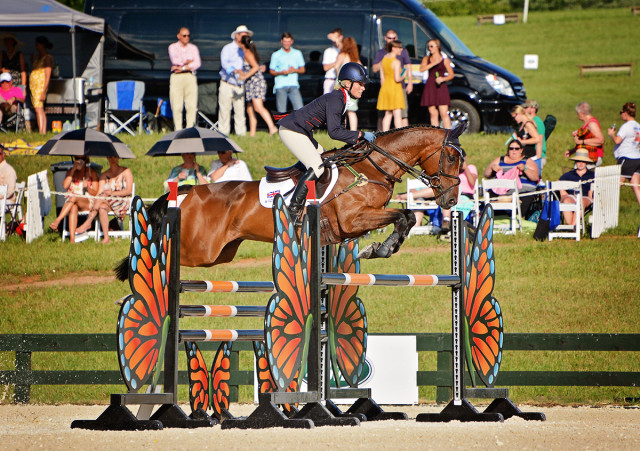 “I’m really, really excited to be here,” Jodie said. “It’s an incredible opportunity, and I think all of us competing here are very grateful for the opportunity. It all happened in the last couple of weeks and it’s been incredible. We couldn’t have been more welcome. The facilities are second to none. The arena obviously is absolutely incredible. The footing is brilliant. The cross country course for tomorrow looks fantastic.”

Cross country starts at 9:30 a.m. EST tomorrow and is scheduled to run through noon. You can watch live on USEF Network, and we’ll also be running live updates here on EN for those of you who can’t watch the live stream. Be sure to check EN’s Instagram for loads of photos from today, and click here to catch up on all of EN’s #GMI2016 coverage. 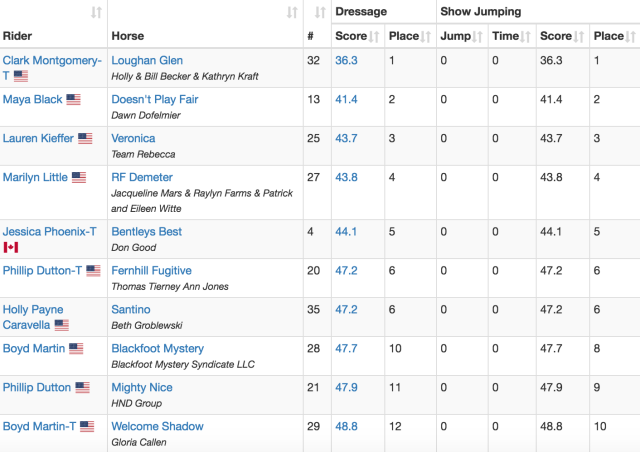