Amidst the excitement of the American Eventing Championships and the FEI Eventing European Championships, we look northward to Jemseg, New Brunswick where the second iteration of the Foshay International CCI is being held this weekend.

Held over Labor Day weekend, Foshay is the perfect end-of-summer showcation for U.S. riders as well. Honestly, it’s not that far — just less than 8 hours from Boston, Massachusetts, which is a similar haul to from the same area to many Area II events. 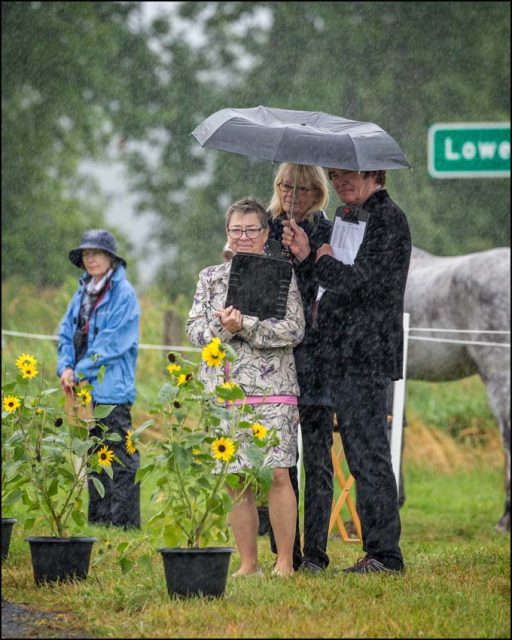 While the competition in earnest was set to begin on Thursday with dressage for the CCI1* division, mother nature had other ideas, unleashing a veritable downpour and giving everyone a proper soaking. Organizers opted to move all dressage to Friday to give competitors, spectators, and volunteers alike a drier, warmer and probably slightly more enjoyable experience.

The first horse inspection for the FEI divisions was still held that morning, however. Hats (or, rain jackets?) off to these tough ladies who said ‘what the heck’ and opted to show off their trot-up flair regardless of the weather! 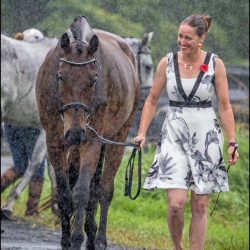 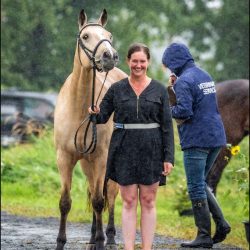 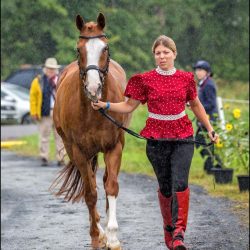 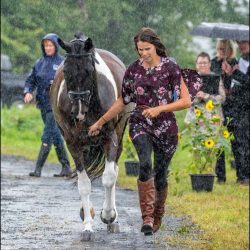 As hoped, the sun came out on Friday offering everyone much better conditions under which to enjoy some fancy prancing. After dressage, Mireille (Mimi) Bilodeau and her own 8-year-old Canadian Sport Horse gelding Make My Day scored a 30.20 and are leading the CCI2*-L. This is both the horse and rider’s FEI debut, so surely that score made Mimi’s day, indeed.

Holly Jacks-Smither is making a return trip to Foshay with Favonius Nite, a 9-year-old Dutch Warmblood gelding owned by Mark Marquis, who’s known to his fans as the One Eyed Wonder Pony and to his friends as “Favy.” As winners of the division last year, they’re looking to defend their title and currently lead the CCI1* on a score of 29.30.

Rob Stevenson — yes, the same Rob Stevenson also serving as event organizer for Foshay — is actually the only rider in the Preliminary division. Needless to say, he and the 10-year-old Irish Sport horse mare Sportsfield Two Doors Down are currently leading. Their score of 28.30 is nothing to sneeze at though; in fact, it’s the lowest of the day. Watch their test here:

Rob Stevenson and Sportsfield Two Doors Down put in a lovely test in the Preliminary division! So great to have this horse back on Canadian soil 😊 #Mary

Rounding out the competition is the EV 105 division, in which Philippa Hambly of Fergus, Ontario and Jay Hambly’s Captain Midnight, an 8-year-old Thoroughbred gelding, are leading the charge with 34.10 penalty points.

Speaking of Jay Hambly, cross country for all levels kicks off today over the courses that he designed and built. All levels run an out-and-back style track parallel to the St. John River — it’s quite picturesque, really. The CCI2*-L course measures 3796 meters, has 19 numbered fences and 30 jumping efforts, and the optimum time is 7 minutes 18 seconds. The CCI1* is an even 3000 meters long with 18 numbered fences and 25 jumping efforts, for an optimum time of 6 minutes even.

Thanks to the always amazing Joan Davis of Flatlandsfoto, official photographer for Foshay, we have a peek at a few of the complexes on the various courses and it’s thanks to her for capturing the above soggy but stunning jog photos as well. You’re the awesomest, Joan! 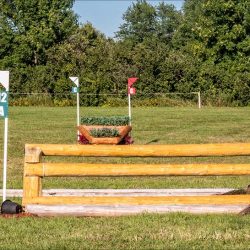 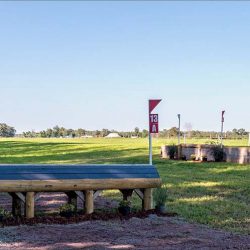 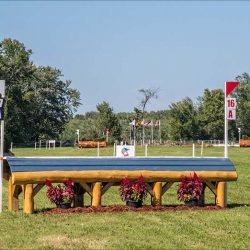 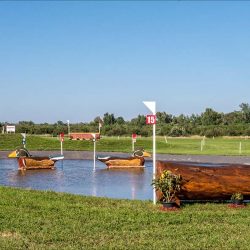 The left side of Foshay’s water complex. Red flags are CCI2*, white/ red are CCI1*, Prelim is green, and EV 105 is black/ white. Photo by Joan Davis/ Flatlandsfoto. 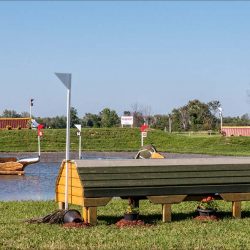 The right side of Foshay’s water complex. Red flags are CCI2*, white/ red are CCI1*, Prelim is green, and EV 105 is black/ white. Photo by Joan Davis/ Flatlandsfoto. 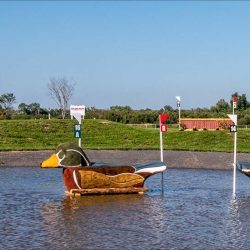 Duck(s)! In the water complex at Foshay. Photo by Joan Davis/ Flatlandsfoto.

Keep it locked right here on EN for more coverage of Foshay International, as well as all those other big events happening this weekend!