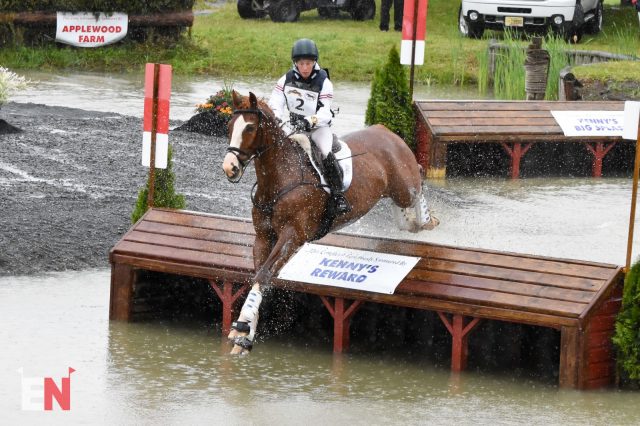 She earned not one, but two double clear results, standing in first and third with Louis M and Sir Patico MH, respectively.

Dressage winner Louis M, a 12-year-old Rheinlander, has two CCI2* wins in his arsenal with former rider Pia Münker and he shared his experience with Cornelia today over the saturated track.

“He was fabulous. He is much more used to these conditions than my other horse, so it was nice that I got to go out on him first and get that confidence in myself to make the less experienced one confident in himself,” Cornelia said.

Her second ride, Sir Patico MH, had the fastest trip in the division, coming in 13 seconds under optimum time. The 11-year-old Zweibrucker holds a two-phase score of 53.7 going into tomorrow’s show jumping. 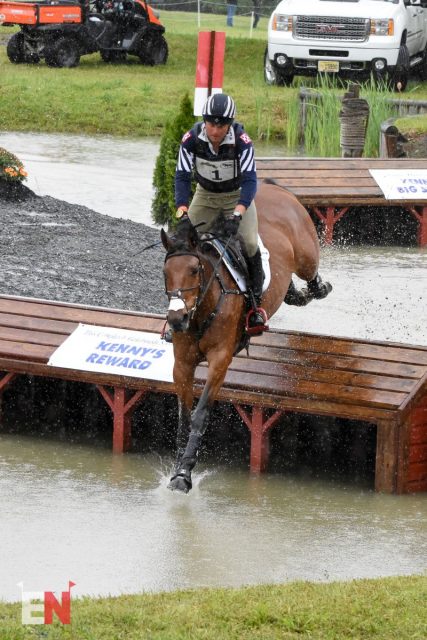 “She was phenomenal on the cross country at the end of the class. The ground was deteriorating, but she really fought hard and got close to the time,” he said.

Boyd appears again in the top five with trailblazer Tura Lura, a 9-year-old Irish Sport Horse owned by Gloria Callen and Nancy Hathaway. You can’t fault him for consistency, as he finished on the exact same time with both horses. Despite his good fortune today, Boyd and many other riders have spent the weekend reflecting on their friend Philippa Humphreys.

“To me it was an eerie kind of day because 12 months ago was arguably my worst day in eventing with the passing of Philippa Humphreys. All day long it was sort of crossing my mind how awful today was a year ago and how many lives it changed,” Boyd lamented.

“That being said, I’ve got to take my hat off to the Jersey Fresh Organizing Committee. They’ve done a complete 180 with the course–changed the designer, the path and the look to the fences. I thought it was a very inviting track and it was a contest still. It was really hard to make the time and you had to ride the whole way around. Mark Phillips I think is actually becoming a better course designer with age. The last couple of years I feel like Mark Phillips’ courses have been the best in his whole career.” 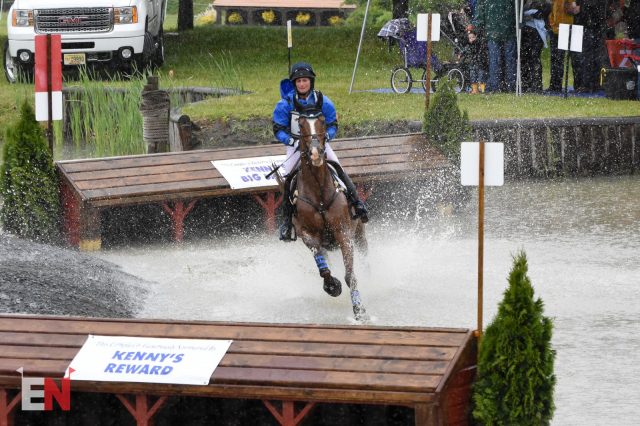 Fourth place goes to Jennie Brannigan with Nina Gardner’s homebred gelding Twilightslastgleam. The 10-year-old Thoroughbred also had a faultless round to remain on their dressage score of 56.6.

The CCI2* class was very keen with all 12 starters coming home without jump penalties, and four of those under the time. In addition to Cornelia and Jennie, Caroline Martin also joins the fault-free club with her own Cristano Z. 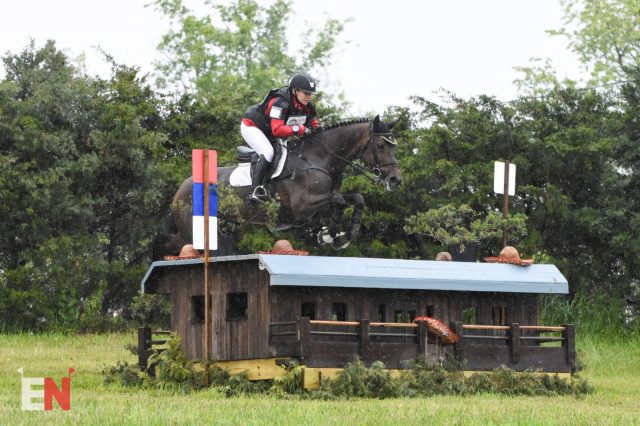 Rainfall was an exciting challenge for overnight CIC3* leader Marilyn Little, as she wanted to test RF Scandalous before they make the overseas trip to Luhmühlen next month.

“I walked out there during the CCI3* and I thought it looked quite OK. I thought the footing was holding up quite well. It looked like the horses were reading it well. I didn’t have a question if I was going to go,” Marilyn explained. “By the time I went it was really heavy going. I was thrilled with her. She’s a beauty queen on the first day, so it’s easy to think she’s a delicate horse, but she’s actually a really courageous horse.”

She and “Kitty,” a 12-year-old Oldenburg owned by Jacqueline Mars, Robin Parksy, and Phoebe and Michael Manders, moved expertly through the unfavorable conditions. Although they came home with 16 time penalties, a two-phase score of 53.7 was enough to keep hold of their lead.

“I was looking forward to the chance to ride her in the weather. She hasn’t had a real run in the rain since Boekelo in 2015. She’s gotten lucky I suppose with fair weather events, so this was a big opportunity to see where she is in her training and fitness. Going into Luhmühlen it will have plenty of mud, and you want to know what you have before you head over,” she continued. 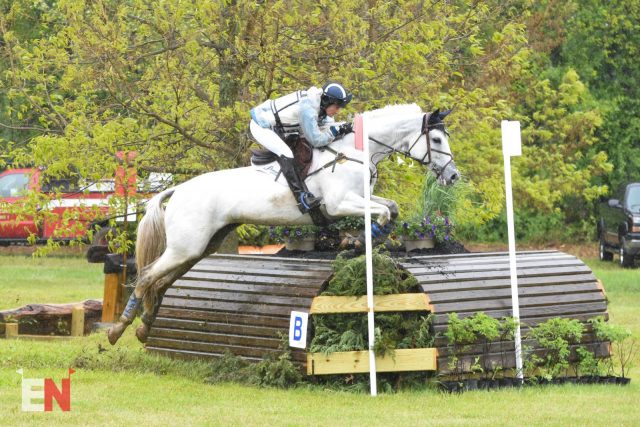 Jennie Brannigan and Cool As Ice. Photo by Shelby Allen.

Jennie Brannigan put the pedal down with Elisbeth Battel’s Cool As Ice, a 9-year-old Holsteiner mare, to jump from 12th to second place after this phase on a score of 66.8.

Boyd Martin also moved into the top three in this division, this time with Tsetserleg, a 10-year-old Trakehner gelding owned by Christine Turner. They added 23.6 time penalties on course today.

Two riders withdrew: Ryan Wood opted not to compete with Powell and Michael Walton with Woodstock Wallaby. Buck Davidson’s trip around with Halimey came to an early end when he and the 12-year-old Trakehner picked up three stops at fence 9A, the Jersey Shore water.

Second placed Phillip Dutton was making easy work of the course with Fernhill Revelation, but he had accidentally jumped the CCI3* first fence instead of the CIC3* one, so the pair were pulled up by fence six and received a technical elimination.

Courtney Cooper and Who’s A Star, who have rerouted from Rolex Kentucky, activated a frangible pin at an fence 22, an open oxer. There was subsequently a hold on course as builders worked at a feverish pace to get the fence reset.

Today’s conditions become apparent in this division as you look down the leaderboard. None of the 21 finishers came home within the optimum time of 6 minutes and 51 seconds. Woods Baughman and Montesquieu came the closest with a time of 7:29. 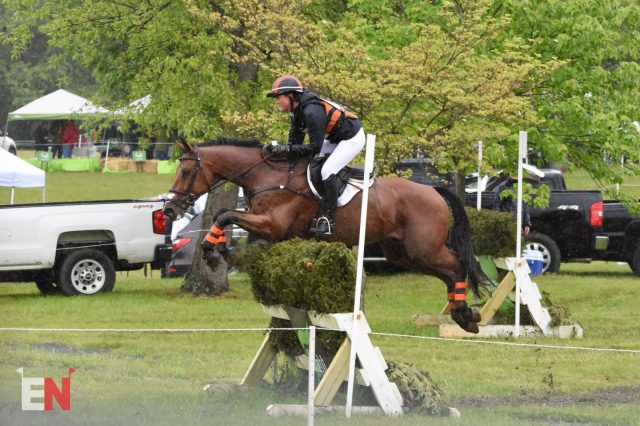 In the final group of the day, Lauren Kieffer moved quickly to hold onto her CIC2* lead with Debbie Adams and Jacqueline Mars’ D.A. Duras. The 9-year-old Dutch Warmblood was looking very sharp in his last competition before heading to England for the summer with Lauren. 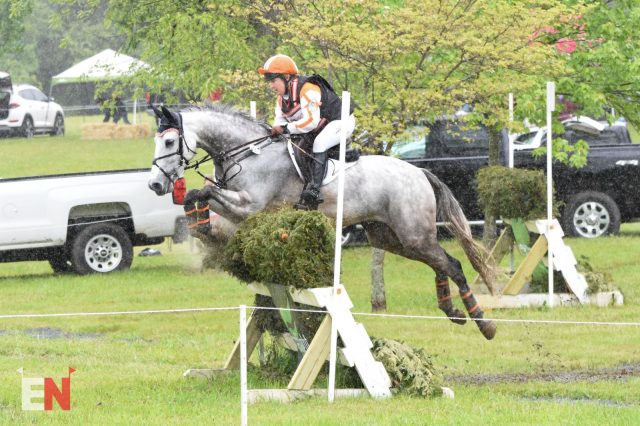 Sharon White managed the quickest ride in this division with her own Cooley On Show. The 10-year-old Irish Sport Horse, who picks up at this event after retiring on course in Kentucky two weeks ago, looked confident as ever. The pair are less than a point behind Lauren and “Duras.” 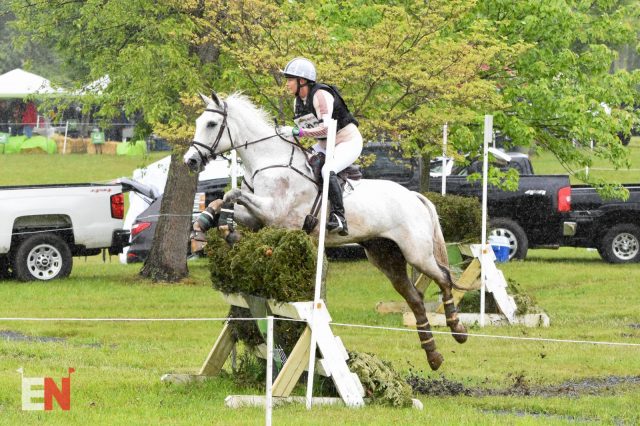 Sara Kozumplik Murphy and Rubens D’Ysieux round out the top three in this group. They add 11.6 time penalties to their dressage score.

Five two-star combinations withdrew this morning, two retired on course and one rider, Bevin Dugan, came out of the tack during her trip with Kemmerlin, but is reported to be OK.

By the time the CIC2* riders went out on course, the conditions had certainly deteriorated, but the Jersey Fresh crew was hard at work to keep it in working order for the final pairs out of the start box. From the entire team at EN, thank you JFI team for all you do! 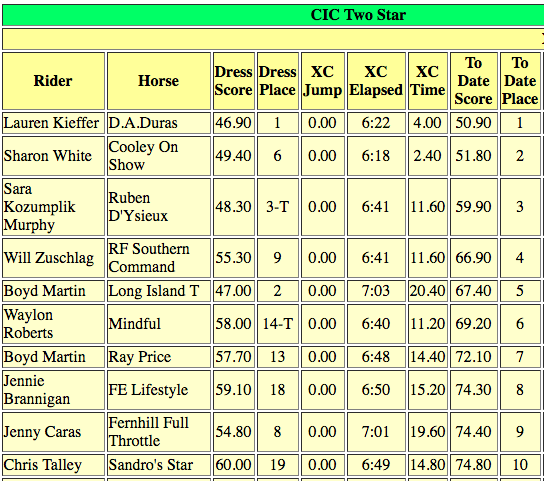 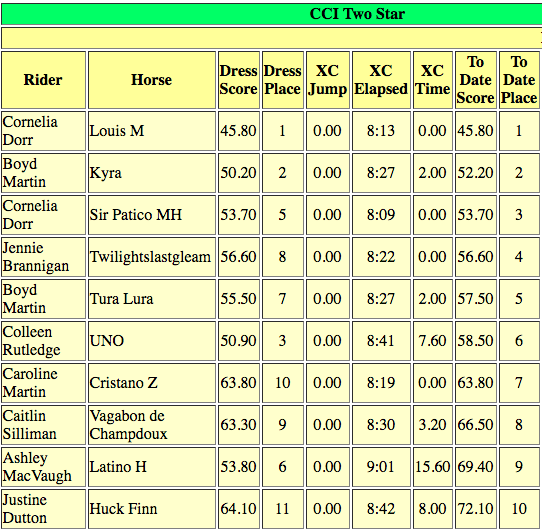 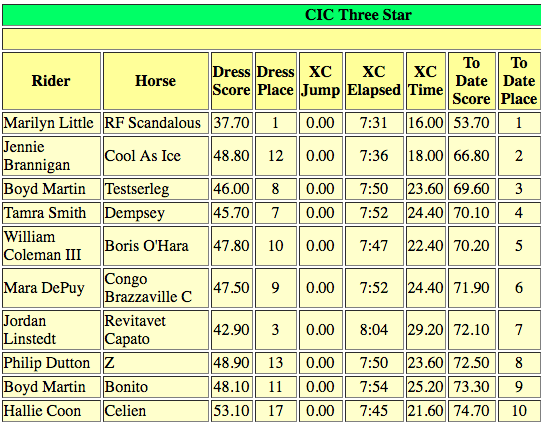