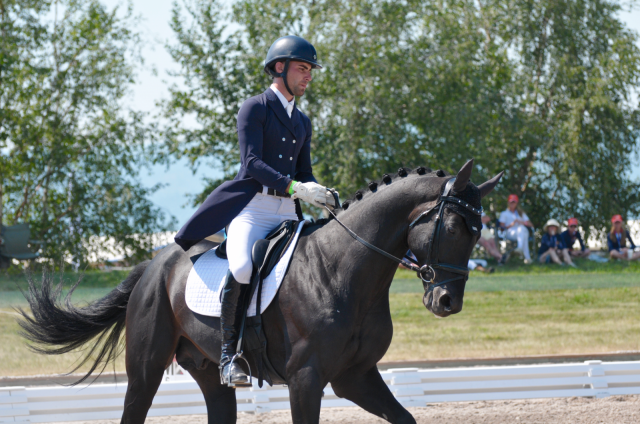 Chris Talley and Sandro’s Star. Disclaimer: My mare Princess is having Sandro’s baby which makes him my son-in-law, or brother-in-law, or something (can’t wait to see you at Thanksgiving dinner, Sandro!), so I’m kind of biased. Photo by Leslie Wylie.

Sandro’s Star is the majestic black stallion that gallops through all of our dreams and not surprisingly he has taken the Adequan USEA Gold Cup Series CIC3* dressage lead here at Rebecca Farm.

Even without a collective mark for “sheer exquisite beauty” (a proposal tabled indefinitely by the FEI) to bolster his score, this magnificent creature scored a 29.3 to overtake the lead in a dramatic grand finale of the division. Together with rider Chris Talley, they brought 2015 FEI Three-Star Test B to life, as one might produce music from notes on a page: his extended trot a dramatic crescendo, his canter a waltz of lilting strings, his centerline a slow-burn cymbal crash that made you want to throw roses at his feet. Encore, Sandro! Oh wait, not yet. You have to halt first. 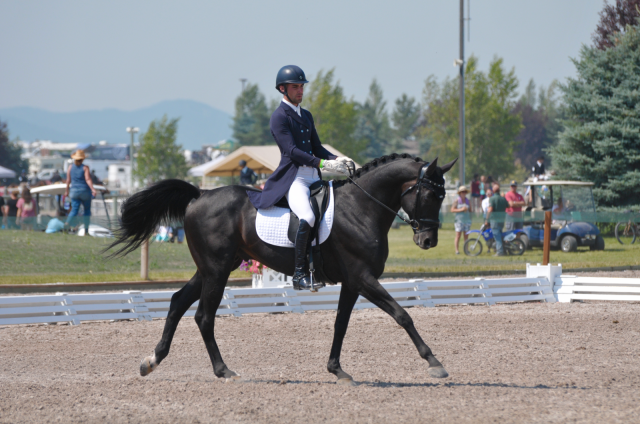 I called Princess after Sandro took the lead like “OMG PRINCESS GUESS WHAT?!” Photo by Leslie Wylie.

With the exception of a slightly fidgety halt — or was it a slow-motion piaffe, totally on purpose? — Chris and Sandro performed a consistent, expressive test to score a 29.3, their personal best at the level. “There were some really good moments today and I was really happy with him throughout,” Chris says.

The pair came to Rebecca under the auspices that they were doing the CCI3*, until Chris got a call yesterday that they weren’t qualified by, like, a fraction of a time fault as per some new FEI rule change. Gah, FEI! Always ruining it for everybody. Thankfully Rebecca’s organizers were able to shuffle them into the CIC3* division. 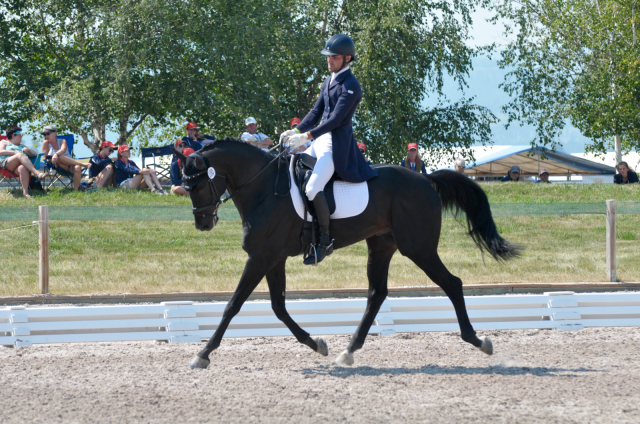 In addition to Sandro, Chris is riding Unmarked Bills, his own 9-year-old Thoroughbred gelding, in the CCI3*, and is jazzed to tackle Ian Stark’s cross country track on both horses.

“I think the Thoroughbred, it should suit really well because it’s open and galloping. Sometimes he doesn’t like to turn — he just likes to gallop and jump,” he says. “With Sandro, I’m looking forward to it. He’s such a super jumper. It should be good.”

Named 2017 USEA Stallion of the Year, Sandro is a full-time athlete and part-time ladies’ man who stands at stud at Hannah and Antonio Salazar’s Zaragoza Acres in Virginia. The 10-year-old Oldenburg stallion (Sagnol x Poetic Patter xx, by Nostalgia’s Star xx), owned by Hannah Salazar, is a professional when it comes to keeping work separate from, em, pleasure.

“He’s such a super horse and he’s such a super stallion,” Chris says. “He’s stabled next to our other stallion and the farm, he’s in the same barn with mares and foals — he’s such a workman. He goes up to the ring and works and it makes it really easy to train on him.”

The only time Sandro got a crush on a mare during competition was once at Jersey Fresh. “Jennie [Brannigan’s] mare was in the ring next to me,” Chris says. “He looked at her and then went on through everything, but he looked at her and he thought about it. He picks out the pretty grey mares.” 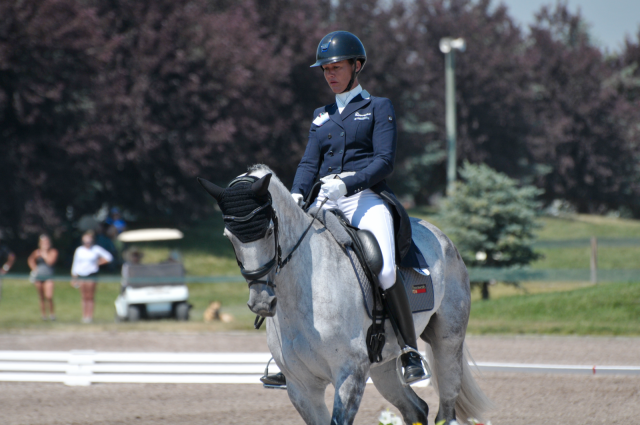 Tamie Smith and the 9-year-old Holsteiner mare (Riverman x Marisol, by Corofino), owned by Judy McSwain, are 2nd in the CIC3* on a score of 31.0. Tamie says “Rory” got a bit lit up flatting in a ring beside cross country, but that it was all good: “I’m kind of in that step where I can put my leg on and ride her through it.”

An in-the-saddle perfectionist, Tamie is quick to point out their little mistakes — Rory tried to halt at X instead of I, they had a step of canter in the shoulder-in, one change was late — but says she feels like overall they’re on the right path. 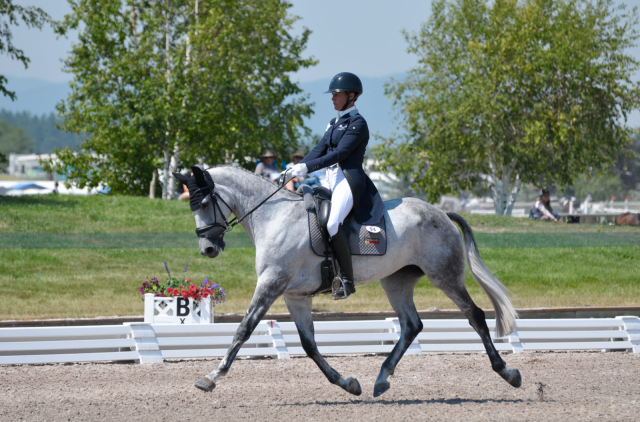 “Having all those mistakes before would have really put me low, but because of the overall suppleness and quality of her I was really happy,” she says. “Even though she was a little zippy she was still really relaxed and moving through her body. She’s such a great horse for the future and she has the ability to really knock it out of the park on the flat.”

Tamie and Rory won the CIC3* here last year and are up for the challenge in front of them tomorrow. “I think it’s a typical Ian track. Being here multiple years I think he’s taken a lot of the tight, turning, technical pieces out of it and made it an open gallop-y course, and so far it looks like his best track here.” 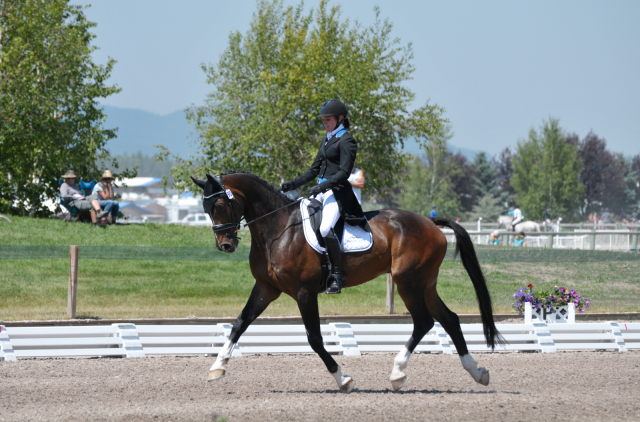 Rounding out the top three in the CIC3* is Jordan Linstedt and Revitavet Capato. Photo by Leslie Wylie. 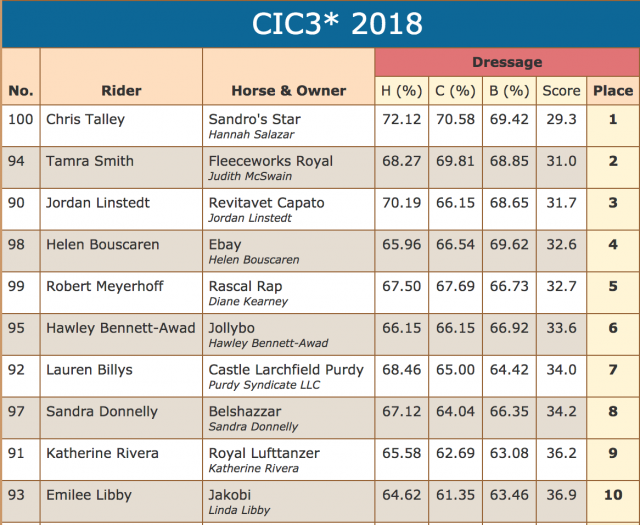