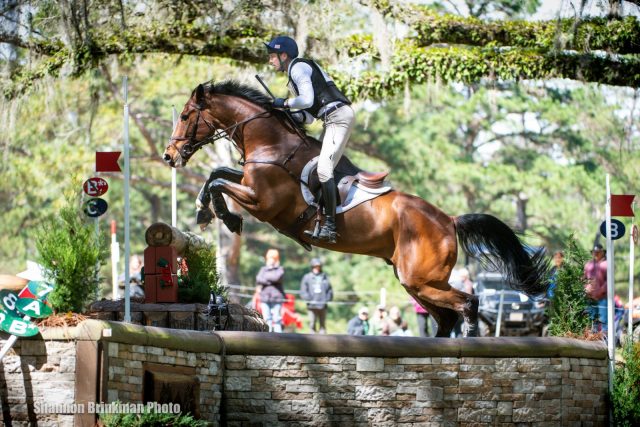 Will Coleman and Off The Record. Photo by Shannon Brinkman.

When competitors arrived on the grounds of Elinor Klapp-Phipps Park in Tallahassee, Florida earlier this week, it was a balmy 87 degrees in the Florida panhandle. Flash forward to cross country day and everyone at Red Hills has experienced the gamut of weather conditions including dropping temperatures, heavy rain, and even tornado warnings. It was around 50 degrees for cross country at Red Hills International Horse Trials today — terribly chilly for the Floridian spectators out enjoying the action, but perfect for the horses running across country.

The weather added some insult to injury to the livestream as well, with a fallen tree branch taking down some important cables just after other technical difficulties had been remedied. We’d like to send a shoutout to the team at Red Hills and R.N.S. Videomedia for working so hard to get the livestream up and running, which they did just a couple horses into the CCI4-S class, so that this event could be enjoyed around the world.

Will Coleman and Off The Record Keep the CCI4-S Lead

It’s notoriously difficult to make the time in the top division at Red Hills, thanks to the winding, albeit beautiful, track designed by Mike Etherington-Smith. Nobody in the CCI4*-S (or Advanced) managed the feat today, but overnight leaders Will Coleman and Off The Record, owned by his namesake syndicate, came the closest to the optimum time of 6 minutes 39 seconds thanks to turning in the fastest round of the day as the only pair to cross the finish flags in under 7 minutes. They clocked in at 6 minutes 56 seconds, to add 6.8 time penalties to their score to keep the lead on a 30.6. Will chalks his fast time up to “Timmy’s” efficiency across the country:

“If I ride neat and smooth he’s usually fairly quick. I was just trying to pick good ground. and he seems to just have a knack for getting close to the time, if not under it. I just kind of rode him like I always do. He’s a very genuine animal and I appreciate that about him.”

While Will may have ridden Timmy, a 13-year-old Irish Sport Horse gelding (Arkansas x Drumagoland Bay, by Are Ohio) bred by Peter Brady, as he usually does, Red Hills is not an event that Will usually rides at. He’s made a conscious decision this season to mix things up and travel to events that haven’t normally made his spring calendar in the past. 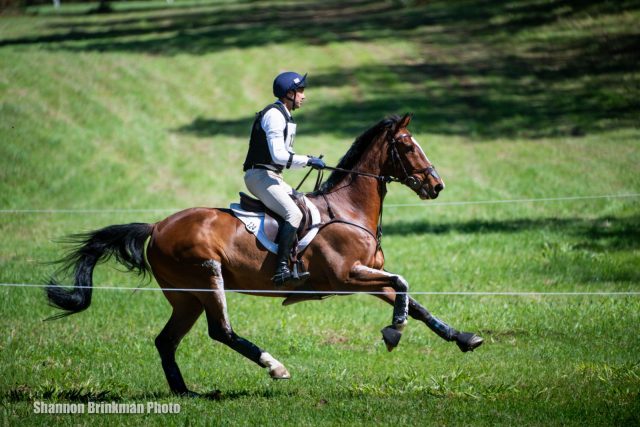 Will Coleman and Off The Record. Photo by Shannon Brinkman.

“For myself and for the horses, we don’t get any better doing the same courses over and over. I thought this year would be a good opportunity to take my top horses to some events that have a bit of different feel and suit them differently than they might be used to. I figure if I want well-rounded five-star horses, I have to add some breadth to their experience.

“Red Hills is a unique place because the course comes at you fast and you have to be pretty sharp to come at it and give it a good crack, so I thought it would be a good challenge. I like that fact that we show jump last here, which we don’t do anywhere else on the spring calendar, so I can get a feel for how they’re jumping the day after cross country.”

A sport of highs and lows, Will experienced both within the same division. Sitting in 10th place after dressage with DonDante, the pair was one of the earliest out on course in the CCI4-S and had an unfortunate slip on the flat at the first water complex as they were turning on land to come back around through the water a second time. DonDante is a-ok, and Will will take some time to think about where he’ll route the 12-year-old Irish gelding next as he aims him at another crack at Kentucky next month.

“He’s a good horse with a bit of bad luck today,” says Will. 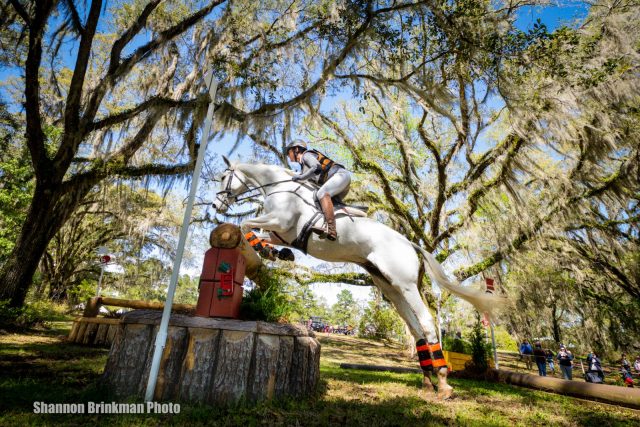 Will and Timmy will have rail and a handful of time in hand ahead of the now second placed Lauren Nicholson and Landmark’s Monte Carlo, the US-bred Irish Sport Horse gelding (Formula One x Glamour, by Flash Tycoon) bred and owned by Ms. Jaqueline Mars. Lauren had the second fastest round of the day and moved up one spot in the standings from third, adding 8.8 time faults to sit on a score of 38.1.

Now 16-years-old, Lauren and “Patty” have developed a lovely partnership, and their round was one of the smoothest to watch.

“I’ve been riding him since he was three years old, so I’m just excited when I get to go out on him. He’s really fun. We just have such a partnership now, so it’s pretty enjoyable out there. I had a great time and he’s always liked Red Hills and he’s always done well here.” 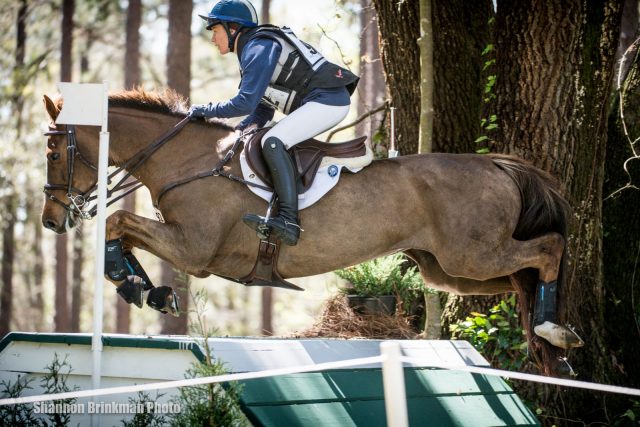 Also moving up one spot on the leaderboard are Mia Farley and her own BGS Firecracker who now sit in third position heading into show jumping on a score of 43.0. Mia calls Firecracker, a 12-year-old Irish Sport Horse mare (Capitalist x Emmas Courage, by Courage II),  a long-format horse: she like to utilize those long gallops to make up time after setting up for combinations. Even so, Mia set out to challenge the time today and she and her mare made pretty easy work of the twisty Red Hills track. As one of first out on course, they spent a good portion of the day sitting as clubhouse leader after a fast round that garnered 12.8 time penalties.

Mia is also sitting 15th in the division aboard an exciting young horse in Phelps, an unraced 2013 Thoroughbred gelding by Tiznow, who is new to the four-star level. Though she wasn’t trying to be fast aboard Phelps, the pair came in just three seconds slower than Mia’s first romp around the track.

“He’s such a quick horse. He has his own style, but it feels great and he’s smart on course,” she says. 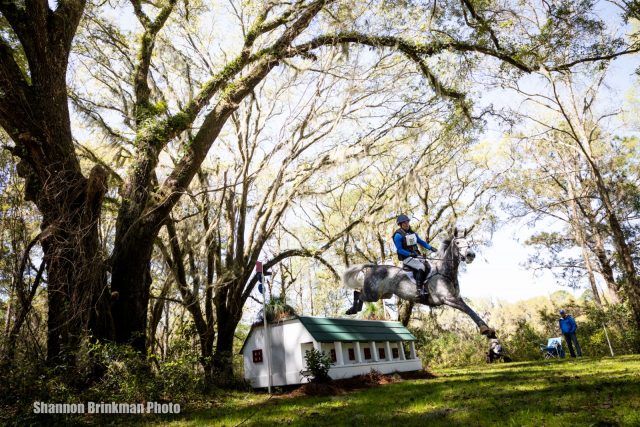 Moving up from ninth place after dressage and into fourth after the third fastest round of the day are Phillip Dutton and a new-to-him ride, Azure, who sit just 0.2 penalty points behind Mia on a score of 43.2. Azure is a striking gray mare who Phillip recently acquired the ride on thanks to owners Anne, Caroline, and Michael Moran. The 10-year-old Irish Sport Horse (Omar x Cavalier Roselier, by Cavalier Royale) was previously ridden through the CCI4-L level by Elizabeth Power of Ireland, who also is the mare’s breeder. 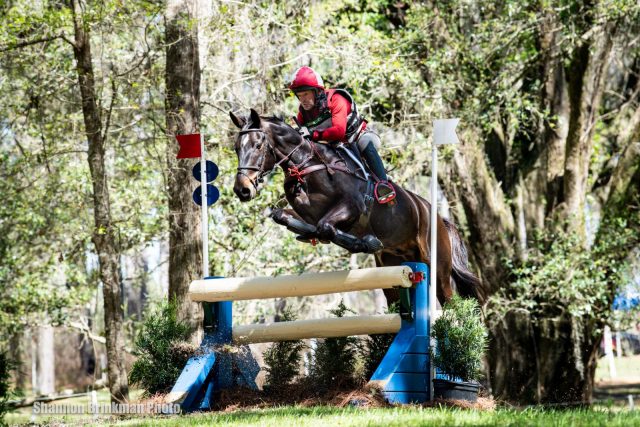 Joe Meyer and his own 12-year-old Irish Sport Horse gelding Buccaneer (Clover Brigade x Tobar Bhride, by Good Thyne) round out the top five with a score of 45.5, having moved up from 17th after dressage. 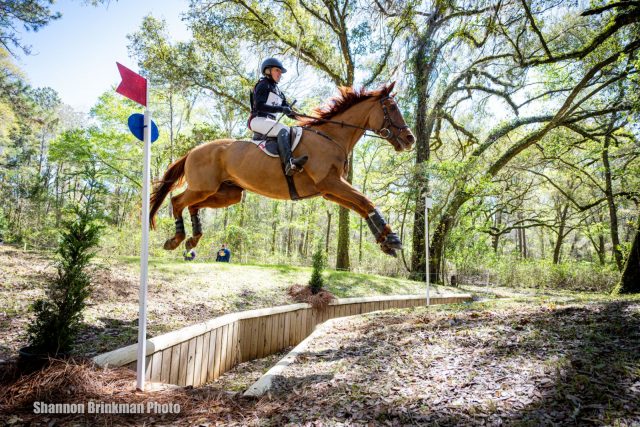 We have to look to 6th place to come across our first non-Irish Sport Horse on the leaderboard after the second phase. Jessica Phoenix and Amara Hoppner’s Bogue Sound, an off-the-track Thoroughbred gelding (Crafty Shaw x Carolina Blue, by Victory Gallop) earned the biggest-mover award after cross country, jumping 17 places from 23rd after dressage to 6th heading into show jumping with 47.6 penalty points. 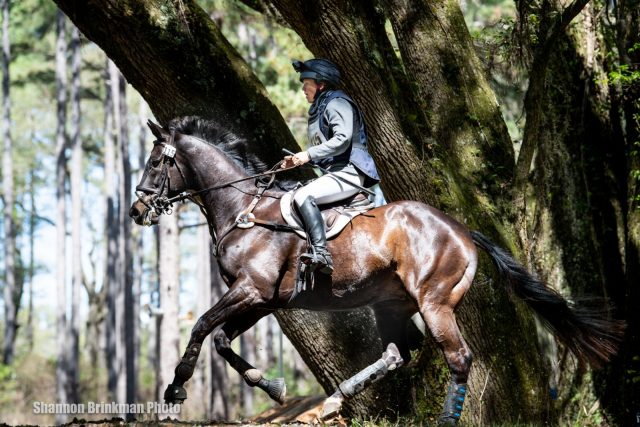 Elisa Wallace and 14-year-old Let It Be Lee. Photo by Shannon Brinkman.

Not far behind on a score of 47.8 are Elisa Wallace and 14-year-old Let It Be Lee, owned by Donna Biggs and Rosemarie Spillane, another off-the-track Thoroughbred gelding (Bernstein x Sugaree, by Broad Brush), who climbed the leaderboard to sit in 7th place. 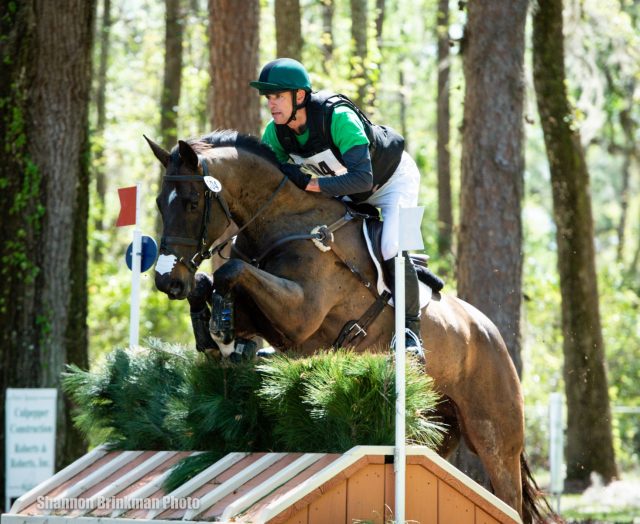 Another 0.2 penalty points later, 8th place is occupied by Dan Kreitl and one of the youngest horses in the division, Kay Dixon’s 9-year-old Carmango, a German-bred Westphalian gelding (Chirivell x Taramanga, Templer). 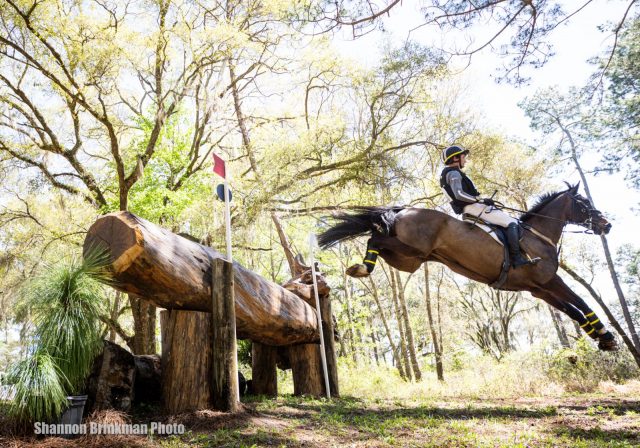 A victim of the tricky-to-get optimum time, Woods Baughman and his family’s 14-year-old Hanoverian gelding C’est la Vie 135 (Contender x Anette, by Aarking) dropped from equal 4th after dressage to now sit in 9th place heading into show jumping on a score of 48.6. 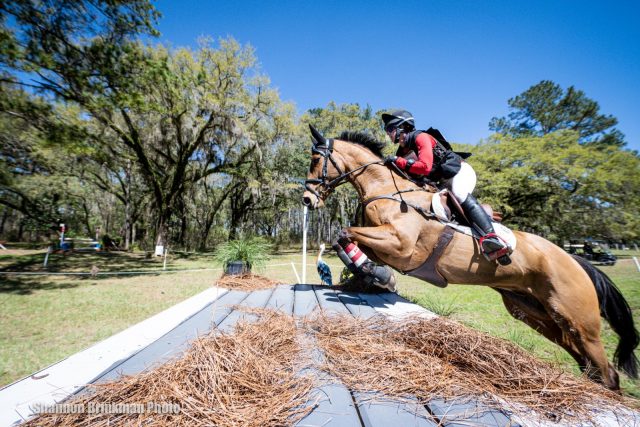 Holly Jacks-Smither and Candy King, a 12-year-old gelding (Grafenstolz x Eye Candy, by Moothyeb) bred in Great Britain by show jumping superstar Jay Halim, also find them further down the headboard after cross country, now rounding out the top ten with a score of 48.8 after having sat in second at the start of the day.

Looking to the Advanced division, which ran over the same track as the four-star, Jennie Brannigan and Twilightslastgleam, the patriotically named US-bred unraced Thoroughbred (National Anthem x Royal Child, by Northern baby) owned by Nina Gardner, held onto their lead in that division adding only time faults for a two-phase score of 43.5. 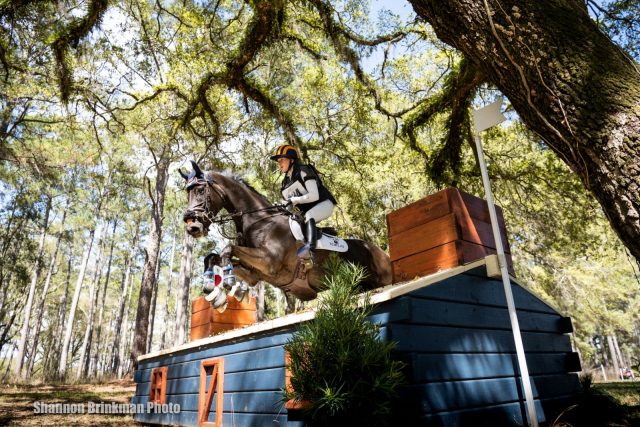 We saw some shuffling atop the leaderboard of the CCI3-S division and generally throughout the scoresheet as time penalties played a large hand in deciding the leaders of this division as well. Unlike the CCI4-S, which only saw two riders suffer jumping faults throughout the division, a number of the CCI3-S pairs fell prey to jumping errors which also contributed to a very different headboard than we saw in this division after the dressage.

Dressage leaders Dana Cooke and FE Quattro collected 14.0 time penalties to drop them to 5th place after cross country, so Liz Halliday-Sharp and the Monster Partnership’s Cooley Moonshine now lead the division. Liz and the 10-year old Irish Sport Horse gelding (Cobra x Kilpatrick Duchess, by Kings Master) moved up the leaderboard from 4th after dressage thanks to a fast round that garnered only 4.8 time penalties and will head into show jumping tomorrow with a score of 31.9. Liz also sits in equal third place in this division on Quite Nice 11, sharing a score of 37.0 with Meaghan Marinovich-Burdick and Riviera Lu. 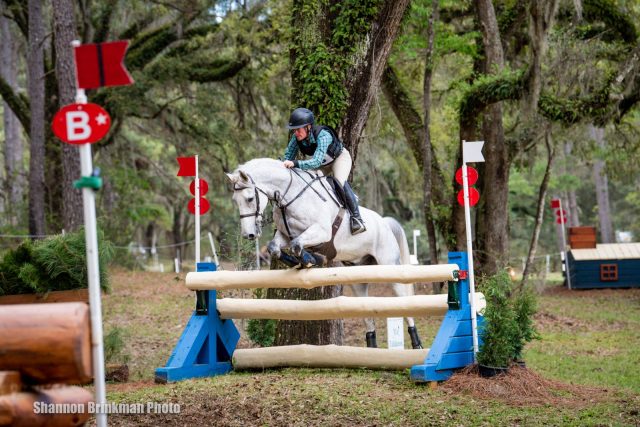 Speaking of fast rounds, Arden Wildasin and her own 15-year-old Sunday Times put the pedal to the metal and clocked the fastest time of the division, finishing just two seconds over optimum time to add 0.8 penalties to their dressage score. That speedy and clean round rocketed the Irish Sport Horse gelding (Cult Hero x Lackaghbeg Crest, by Sea Crest) from equal 23rd to 2nd on a score of 35.8. 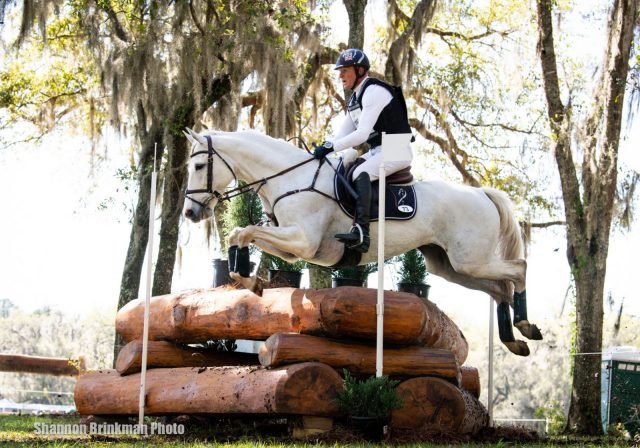 The time across country was finally catchable as we look to the CCI2-S division. Leslie Law and Fupsilon Grande lande, a 7-year-old Selle Francis gelding (Upsilon x L’Irlandaise, by Singasinga) owned by Beatrice Ray-Herme, remain our leaders on their dressage score of 25.3 while Sara Kozumplik and Edith Rameika’s 9-year-old Dutch Warmblood gelding Otta B Quality (Up To Date x Dicarla-H, by Vittorio) continue to be hot on their heels with another double clear round, leaving them on their dressage score of 25.8. 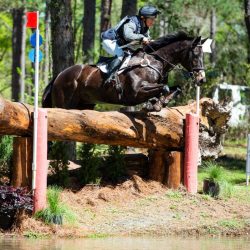 Elisa Wallace and Let It Be Lee. Photo by Shannon Brinkman. 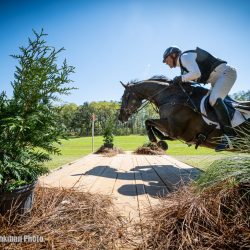 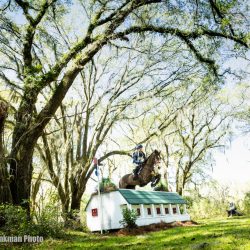 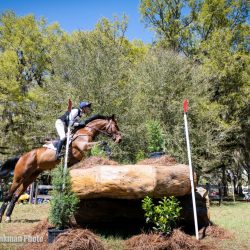 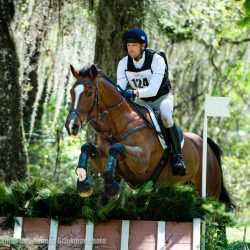 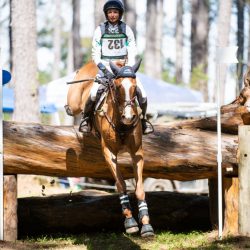 Show jumping kicks off tomorrow at 8:30 AM ET with the Open Preliminary division and then the CCI2-S. The CCI4-S is scheduled to begin after lunch at 12:30 PM followed by the Advanced, CCI3-S, and finally the Intermediate. You can find a full order of go here.

We’ll rejoin you tomorrow for the exciting conclusion of Red Hills 2022 and in the meantime we’d like to thank Shannon Brinkman for her always outstanding photos and also Amanda Chance and Hilary McMichael for compiling the pedigree information found in this report and heard on the livestream.