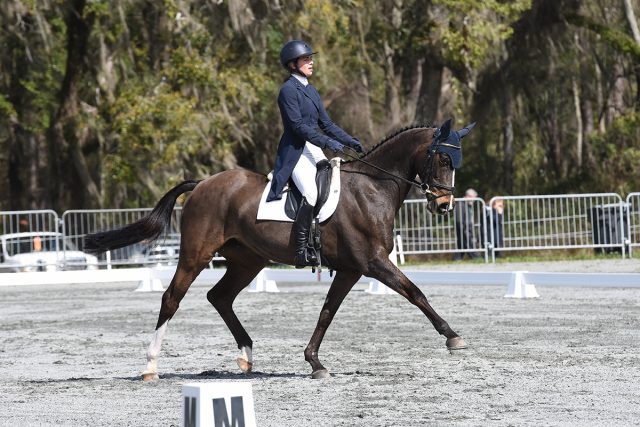 It’s a battle of the best at the 2020 Red Hills International Horse Trails in Tallahassee, Florida, where not not one, but two riders share the leading role of the CCI4*-S division after dressage. Sharon White and Hallie Coon sit on an equal result of 31.4.

Like any good perfectionist, Hallie is pleased with her result, but yearns for even more magic on the flat this season with longtime partner Celien, a 13-year-old KWPN mare (Tenerife VDL x R Quicksilver, by Hamlet) owned by Hallie & Helen Coon

“She lit up in there a little. She spooked in her first walk pirouette, which she hardly ever spooks. I was a little unhappy with moments, but I think the rideability and the connection is getting better. Hopefully in the future we will be able to focus more. She was just very exuberant, but you can’t hardly ever be mad at her she’s such a good girl,” she said. 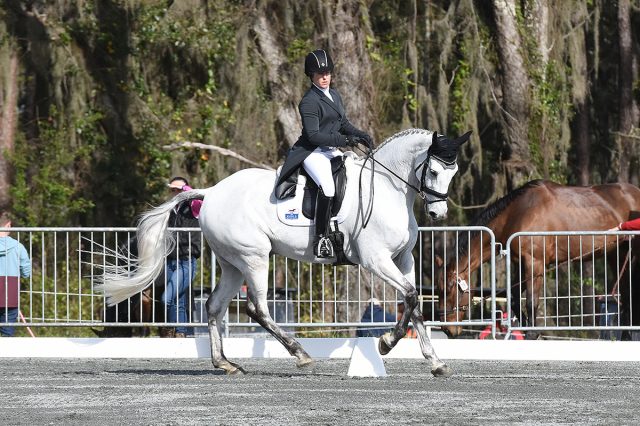 The always affable Sharon White says this weekend is about enjoying the ride with her Cooley On Show or “Louie.” Sharon says the 13-year-old Irish Sport Horse gelding (Ricardo x Jogantina, by Grand D’Espange) was very “genuine” and that dressage is very much a sport of inches, and today’s focus was on the journey and always getting just a bit better. Tomorrow, she says, is about having fun.

“I will enjoy the horse. I think footing is perfect. The rain yesterday is made it ideal for, us so I will let him have fun. It will be a good day to let him go shed a few pounds,” she laughed.

Breaking the tie will first come down to cross country time penalties. Assuming both riders finish clear, whoever is closest to the optimum time will advance in the standings, so must be both quick and cognizant of the clock. 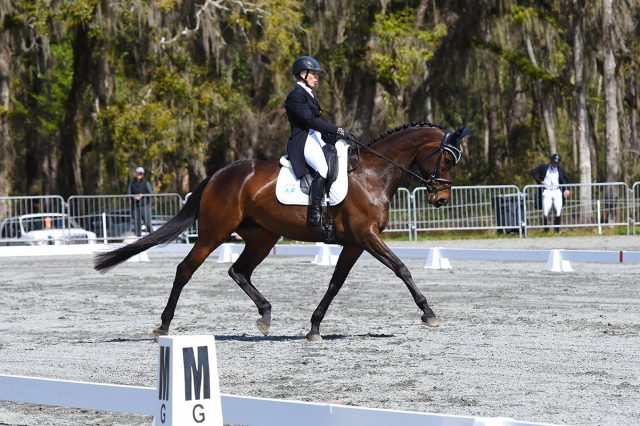 Jennie Jarnstrom was all smiles with her own Calicia Z after their test produced a score of 32.2 for second place. The 9-year-old Swedish Warmblood mare (Papillon Z x Cassidy, by Perell) is a second generation homebred for Jennie, making today’s success even sweeter.

“She was born right at my house,” Jennie said proudly. Her mother bred the sire, Papillion, and Jennie brought him over from Sweden to breed with the mare Cassidy in the states. 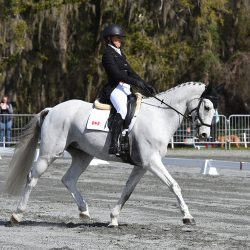 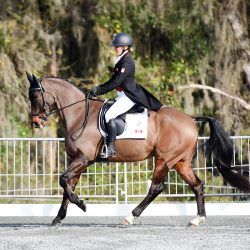 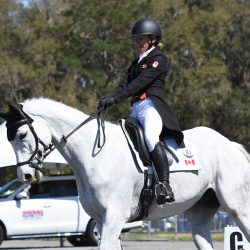 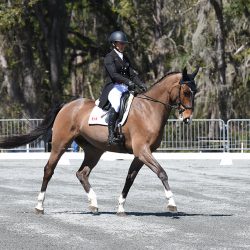 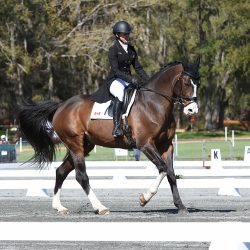 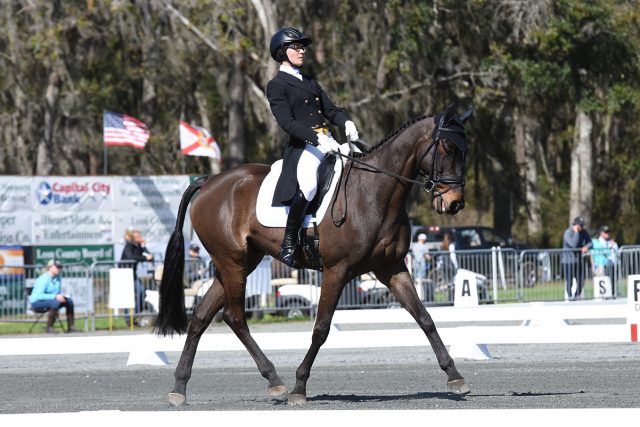 Gabrielle Ruane is sixth with her own Lismakeera Brewski, an 11-year-old Irish Sport Horse (Carlo Bank x Droum Bridge Lass, by Kahtan). This duo, who moved up to the four-star level last year, earned a new personal best of 34.3 in their blossoming experience at this level.

Pretty in pink, Charlotte Collier piloted her own Clifford M into eighth place. She and the 14-year-old Holsteiner earned 34.5 — an eight point improvement on their debut at the level last November. 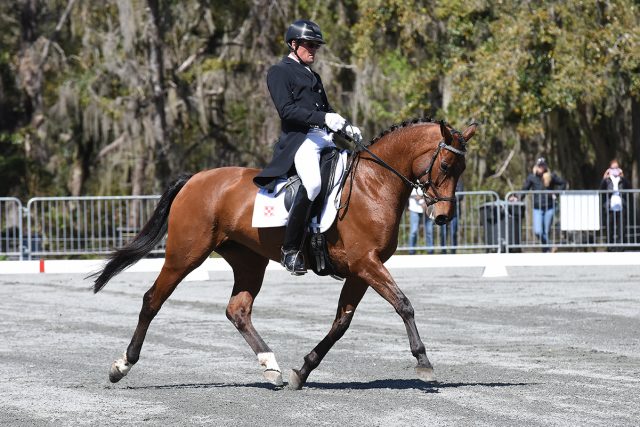 Kyle Carter and Reddy or Not. Photo by Shelby Allen.

Riding for Canada, Kyle Carter rounds out the top ten. He sits on an even 35 points with Reddy or Not, an 11-year-old Trakehner (Oskar II x Raven Riley, by Windfall). 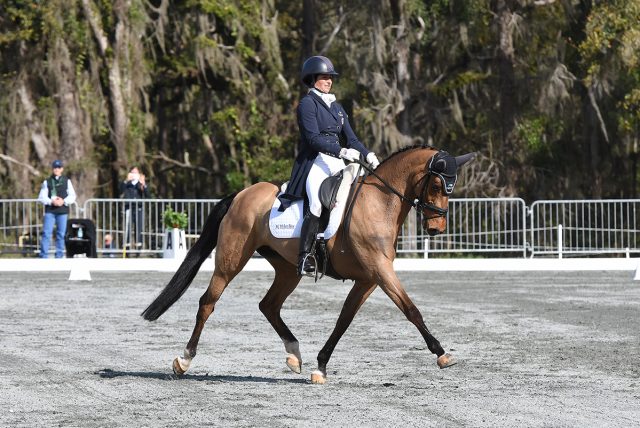 Looking down the leaderboard, Jennie Brannigan is 11th with Bliss III on a score of 35.4, Emily Hamel and Corvett are 12th with 35.6 points, and Ashley Kehoe and Kiltealy Toss Up sit 13th on a score of 35.7. 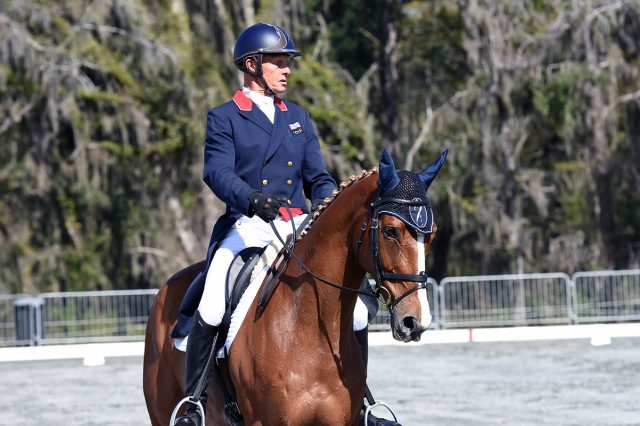 Leslie Law and Voltaire De Tre take 14th with their score of 35.8, and Holly Jacks-Smither and Candy King earned a 36.5 for 15th place.

Cross country four the CCI4*-S division kicks off at 11 a.m. tomorrow. While there is not live stream, we will be doing live updates on EN. Stay tuned for all the latest. 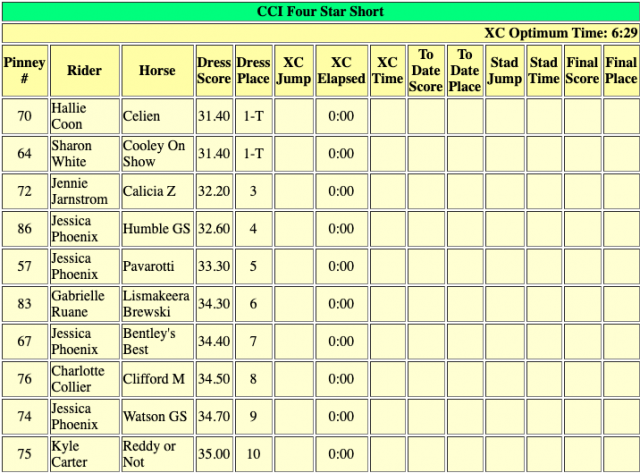