In the wake of last weekend’s tragedy, both the eventing community and its governing body have moved forward with a positive, constructive momentum that spells, in no uncertain terms, that the time for action is now. Around $85,000 has been raised toward the implementation of frangible technology nationwide thanks to YOUR incredible generosity, and a fast-acting safety plan emerged from a two-hour USEA safety meeting last night.

Jon reports that, between the USEA’s Frangible Fence Research initiative and the Frangible Fences for Eventing US GoFundMe, around $85,000 has been raised toward frangible implementation. He’s at Red Hills International this weekend and says, “We would really like to get that by $100,000 by the end of the weekend.” So if you haven’t already, use the links above to DONATE NOW!

Max reports that the USEA Cross country Safety Committee had a long but very productive meeting last night, with a wide variety of stakeholders represented. They were able to put together two working groups to expediently create and enact some changes to our safety protocol.

One group is working on putting together a list of Minimum Eligibility Requirements (MERs) for the day of the competition, as it’s happening. “If you don’t meet specific standards — whether that is a specific dressage score or a certain amount of rails in the show jumping — maybe potentially that’s not your day,” she says. “Maybe it’s not safe for that horse and rider combination to go on to the cross country.”

They’re also working on revamping rider categorization, inspired by the FEI’s system. “Maybe we have to do more Training levels before we go Preliminary, and more Preliminaries before you can go Intermediate,” she says.

Max gives a nod to the incredible effort to implement frangible technology — “There is a lot we can do, and a lot more we can do … new developments are coming out all the time.” 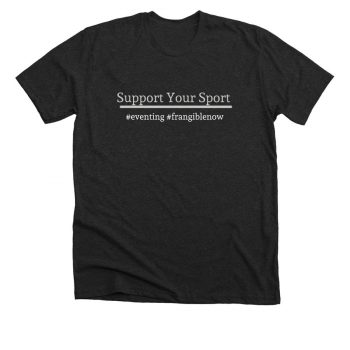 A number of companies have stepped up to donate a portion of their proceeds to fundraising effort, and there is a tee-shirt sale benefit underway as well. Click here to order.

And, finally, Max says the USEA is going to try to re-energize the fact that officials have the ability to give other people a radio and deputize them to keep an eye on riders in warm-up or on course at events. “If something doesn’t look like it’s going right — and that one official that may be busy doing something else or is not in the right field — they also have the ability to report in. So we have more eyes on the ground to keep more things safe.”

Earlier this week, the Thoroughbred racing podcast “At the Races” hosted by Steve Byk had chair of the FEI Eventing Committee David O’Connor on the show to discuss the distinct difference in public reaction to last weekend’s tragedy and the less sympathetic public reaction to the losses that have occurred in the horse racing world in recent months and years: “Saddened when hearing of the tragic loss of Canadian eventer Katherine Morel and her OTTB mare Kerry On on cross country at Rocking Horse Trials III on March 2, Steve was struck by the immediate, sympathetic reaction without rancor from those in the eventing world to the horrific accident. It was a stark contrast to the far more vehement negative public reaction that has accompanied the sudden breakdowns and deaths of Thoroughbreds during horse racing and training, and particularly those that occurred in such inordinate numbers last year at Santa Anita Park in California.”

(Listen to the episode here — it’s worth it.)

David’s viewpoint was straightforward yet illuminating — in eventing, we address the safety issues facing our sport head-on, with transparency and honest discourse that seeks real solutions. That approach, as opposed to finger-pointing and cover-up, lends itself to respect, empathy and constructive problem solving efforts. Certainly, we’ve seen that approach in action this week.

He used an interesting analogy to explain eventing’s multi-faceted approach to solving the problem of safety: Swiss cheese. If you layer two slices of Swiss cheese on top of each other, there are probably still some holes. But if you overlap enough pieces on top of each other, the holes disappear. To wit: there is no one single solution, but if we layer several contributing solutions together, we can get closer.

More ideas and improvements will certainly emerge, but as it stands, it seems like we’re on the right track. As Max says, “This is some good stuff, we’re moving forward, so let’s all stick together and try to keep our sport safe.”

Frankly, I’ve never been prouder of our sport and our community. Go Eventing.