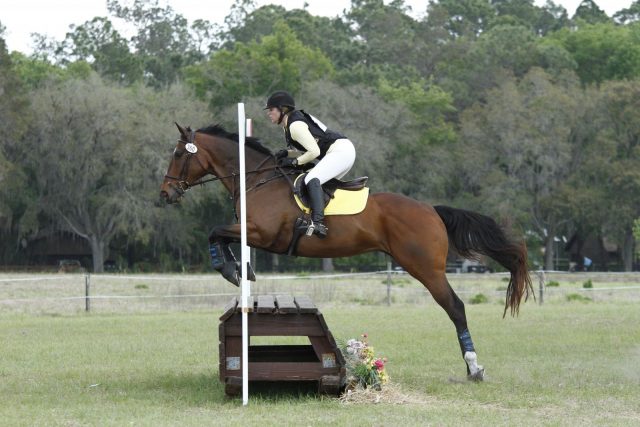 Some horses and riders just seem meant to be. As a case in point, take Heather Thomas, the Executive Director of both the Alachua County Humane Society and Gainesville Pet Rescue, and “Missy Elliot,” a horse who made her way into upper-level event rider Jeanie Clarke‘s barn in an unconventional way.

It all started when Jeanie’s friend Joanna Breeden Carr told her about a nice mare she should look at. But the mare wasn’t at another rider’s barn, nor was she at a breeding farm overseas. She was in the Marion County Sheriff’s Department holding field.

Joanna is an animal control officer in the Ocala, Florida area and the horse had been picked up as a stray, having been abandoned in a vacant lot. The Sheriff’s department was holding her for the prescribed amount of time before she could be auctioned off to the public. Joanna wanted Jeanie to come take a look at the mare prior to the auction because there was “something special about her.”

Skeptical, Jeanie had initially resisted. “I said ‘no way — that’s the last thing I need,’” she recounted, but eventually gave in to her friend’s pleading and went along to go see the horse.

They weren’t allowed to enter the Sheriff Department’s field, so Jeanie had to judge the horse by what she could see: a pretty 17-hand bay in good weight with an athletic type, but a quarter crack that was making her lame. Jeanie wasn’t too concerned with that — her husband Scott is a farrier — and returned from the excursion agreeing with her friend; there was indeed something special about that mare. 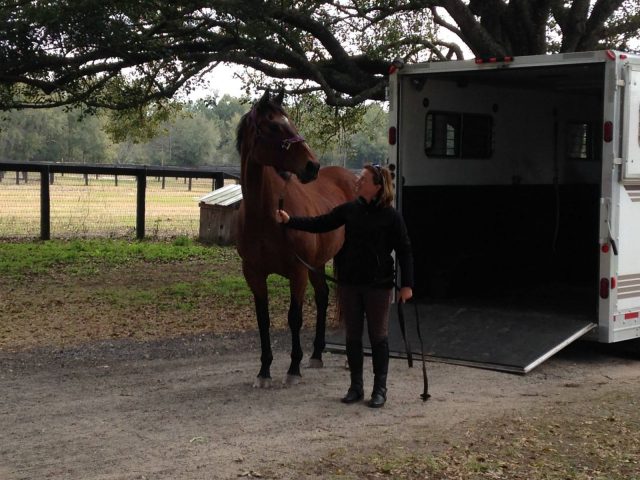 Missy Elliot upon arrival at Jeanie’s farm. Photo by courtesy of Katie Ruppel.

A few days later Jeanie, Joanna and fellow eventer Katie Ruppel, who is Jeanie’s good friend and neighbor, showed up at the auction (which was “more like five people standing around in a field buying animals with their spare change,” according to Katie) to bid on the mare. The mare’s pasture mates, a nice-looking black Quarter Horse colt and a Nubian goat, out-sold her at $40 and $65 respectively. Jeanie was the only one to bid on the mare and could have paid $0.25, but felt bad offering mere coins and bid $1 instead.

The auction took place the day after Super Bowl XLIX when the halftime show featured Katy Perry along with a surprise appearance by rapper Missy Elliot, who was making a come back on the music scene after battling illness for several years. With the memorable performance fresh in her mind, Jeanie christened the mare after the self-assured, dynamic rapper. It would turn out to be a fitting name as fate would have it.

Around that same time, Katie and Jeanie had noticed various upper-level riders were posting announcements on Facebook about the assortment of prestigious and promising rides they had acquired. Making light of their unusual situation, Katie posted her own tongue-in-cheek ‘press release’ for Jeanie complete with masterful usage of song lyrics: 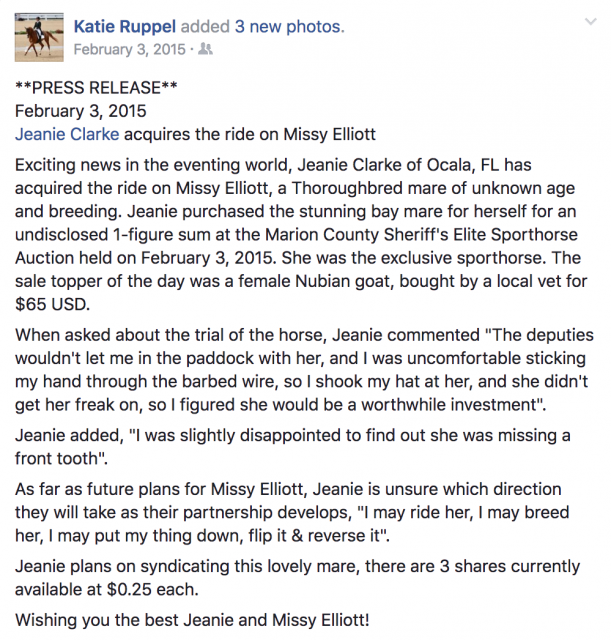 Once Jeanie took Missy home to her farm and had her shod, she incorporated the mare into her lesson and working student program. She got back into shape fairly quickly for a horse who hadn’t been ridden much in the recent past and a few months later Jeanie and a working student took the mare to her first schooling show at Longwood Farm.

It was a big venue with lots to look at and no one was sure how the horse with a mysterious background would handle the distracting atmosphere. But Missy Elliott marched through the in-gate as if she owned the place and threw down a lovely round even nailing her lead changes. Just as Missy Elliot the rapper made a comeback on the Super Bowl Halftime stage, Missy Elliot the horse was ready to make a comeback in the show ring.

After that first show outing, it was clear that the mare knew a thing or two. Jeanie guessed that she had shown as a hunter and had perhaps even been exposed to eventing at some point as well, judging by the way the mare tackled a coffin complex without hesitation her first time out cross country schooling.

Missy Elliot was put on the market come winter and despite an interested buyer, she didn’t pass her pre-purchase vet exam and the sale fell through. Though her radiographs were riddled with bone chips and arthritis, the mare remained sound and Jeanie put her back into her lesson program. As fate would have it, it was all for the best because the perfect person for Missy happened to already be in Jeanie’s program.

Heather Thomas rode hunter/jumpers growing up before taking 10 years off from horses to focus on her education and career. By day, Heather is working towards a goal of making Alachua County a no-kill community as she runs two local rescue groups which have recently come together to broaden their reach and provide better opportunities for dogs and cats in need in the Alachua County area. In her free time, her passion is riding and competing and with her career in place, she was ready to jump back into to the equestrian world, this time in a different discipline.

“It was pretty easy to fall in love with the friendly, inviting eventing community in Ocala,” Heather said.

Heather has been riding with Jeanie for a year now, having come to her with a young OTTB that she was having trouble working with due to a non-horse related back injury. “He was an exceptionally talented young horse but I was in over my head and looking for the right horse to keep me comfortable, safe and confident in the saddle,” said Heather. “As an adult re-rider who can be a bit timid, I couldn’t ask for a better coach or mentor than Jeanie to help me along the road to building my confidence and improving my riding.”

Jeanie wisely paired Heather with Missy Elliot, seeing something in both horse and rider that would complement one another and help Heather build confidence. “I think both Heather and Missy are really smart,  business-like, and serious about their jobs. They respect each other,” said Jeanie. “And Missy Elliot is not warm and fuzzy — she’s definitely an independent horse, but she likes having a person who dotes on her.”

“Missy isn’t the easiest horse to ride, but Heather is serious about her riding and about the complexities of it,” said Jeanie. “The horse is well-schooled enough that she’s interesting, but still has a little bit of the school horse mentality enough to reassure Heather and say, ‘Mom, we’ve got this!’”

“Jeanie knew Missy Elliott would be the perfect fit for me and she couldn’t have been more right,” Heather said. “She genuinely loves having a job and has carefully taken care of me as I learn the sport.”

This January, Heather and Missy left the start box together in USEA competition both for the first time. You wouldn’t be able to tell from their score that it was their maiden voyage, finishing in fourth place after adding one rail to their sub-30 dressage score in Beginner Novice. The deal was sealed on their partnership and Jeanie decided to gift the mare to Heather. Heather has now piloted Missy Elliott to two additional fourth place finishes and, most recently, a win in the Beginner Novice at the Rocking Horse Spring H.T. 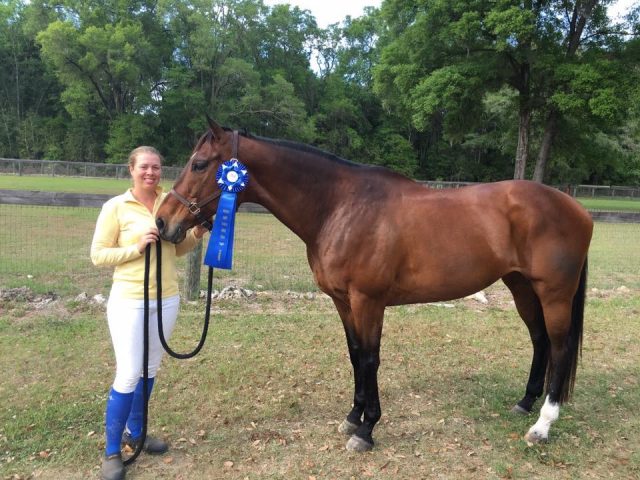 Heather and Missy after their win. Photo courtesy of Jeanie Clarke.

“Being able to compete with Missy Elliott, a rescued horse, is a perfect combination of my work and my passion, ensuring that our community is working to end needless euthanasia,” said Heather. “Jeanie has a heart of gold for taking a chance and rescuing Missy and she has extended that generosity to me. I couldn’t be more grateful for the opportunity.”

“Sometimes it feels like nice people work and work and still don’t get what they want or deserve,” said Jeanie, “but this is working out nicely.”