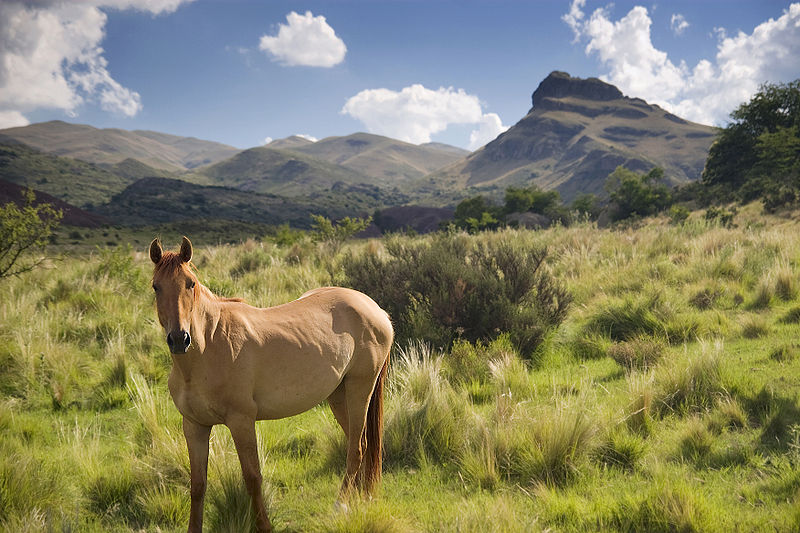 Two-dozen Retuerta horses have been released into the Campanarios de Azaba Biological Reserve in western Spain. Photo via Wikimedia Commons.

Two-thousand years ago, the Romans moved to western Spain, captured all the wild horses and domesticated them, ending a long tradition of roaming herds in the wilderness. Thanks to recent efforts on the part of a project by Rewilding Europe, four-dozen rare Retuerta horses have been released into the Campanarios de Azaba Biological Reserve, an unfenced area that was once their natural habitat. As one of the oldests horse breeds in Europe, the Retuerta is most genetically similar to the ancient Iberian horses that once roamed free in this region, and it is the first time for two-thousand years that they have been free.

The Retuerta horse is a breed that is almost extinct, with only about 150 remaining in the world, all of which were previously living in the Doñana National Park in southern Spain. When a species lives in such a small region, they are in great danger of being completely wiped out by a single natural disaster, which is why wildlife experts have decided to move them to the Campanarios de Azaba Biological Reserve.

Rewilding Europe is a nonprofit group focused on creating biodiversity in places that have been forsaken due to the loss of the agricultural lifestyle. According to their website, “Rewilding Europe aims to rewild one million hectares of land by 2020, creating 10 magnificent wildlife and wilderness areas of international quality. We will especially focus on Europe’s huge areas of abandoned land, and on providing a viable business case for wild nature”. This particular horse project is only one of six efforts of a similar nature, including the rewilding of bison, beavers, red deer, brown bears and white-tailed eagles in places like Poland, Croatia, Spain, Slovakia and Romania.

Eastern Europe is particularly well suited to the aims of the group, having a lower human population density than other parts of the continent. As many people were drawn to the big cities several hundred years, Spain and other countries like it remained largely farmers. Because of the large amounts of abandoned lands, the natural underbrush is growing at a rampaging rate, increasingly causing problems with dangerous wildfires every year.

The effort to re-introduce the Retuerta horse into the environment will, in part, control the growth of the bush through grazing and trampling. On a larger scale, this is just the beginning of a beautiful conservationist effort to preserve and promote the wilderness of Europe. As more and more people move to cities, Rewilding Europe hopes to keep biodiversity alive in the lands left behind.