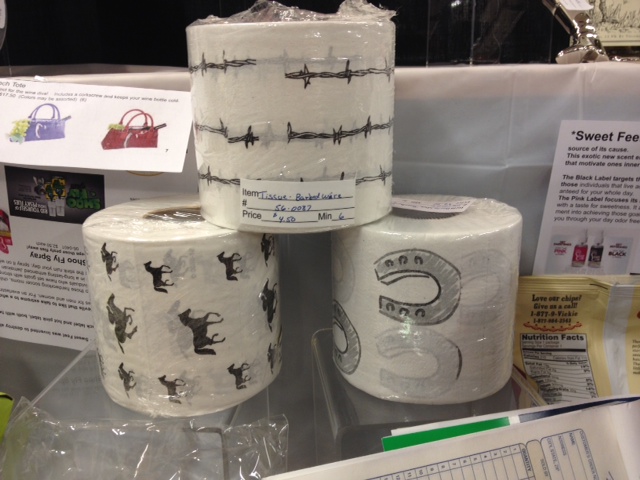 I spotted these handy products at a trade show over the weekend. The barbed wire roll puzzled me a bit. But I was even more puzzled as to why they didn’t have a roll printed with dressage tests. Wouldn’t it be a satisfying way to wipe away a crappy ride?

Horses run amuck in Beijing subways. “Frighteningly realistic 3D horse paintings scare the life out of Beijing commuters,” writes the Mirror. The Chinese government’s commissioned a series of pretty cool 3-D murals for subway stations to celebrate the Year of the Horse. Apparently, for some city dwellers, the equines are a bit too real. [Mirror]

Cavalor Feed for Thought: Winter’s often known as “colic season.” Why? The barometric pressure brought on by cold fronts affects the gases in horses’ sensitive guts. While we can’t do anything about the weather, there are a few things we can do to reduce the risk of colic this time of year. [Feed For Thought]

Tyson should have chomped his other ear off too. During an episode of “U.K. Celebrity Big Brother” ex-heavyweight boxer Evander Holyfield confessed he punched a horse  after she bucked him off — punched her in the face. Not only that, she was a pregnant horse. After the confession, his roommates quickly booted him off the show. [TMZ]

Even worse. Argentina’s abuzz with accusations of equinicide. If that’s a word. The president of Argentine Meat-packing Plants, Jorge Martine,z has been accused of shooting his horse after it threw him. [Buenos Aires Herald]

Stress down centerline. Horse & Hound presents an interesting article questioning whether new FEI dressage tests are putting unnecessary wear and tear on horses’ legs, something elite riders in the story suggest. Oddly, they don’t mention mental stress on the riders resulting from the sheer length of the tests. Have you ever perused a dressage-dressage test? They’re written in long paragraphs. [H&H]

Herculean saddle sores. Brawny actor Kellan Lutz “actually had a bout with butt chafing while mastering the art of equestrianism,” while filming “The Legend of Hercules,” reports E!News. (Equestrianism?)  But there was also a bright side. The horse provided a great workout, according to the actor: “I had my trusty beast—my horse—to work on my legs with every time I rode him and then also working with a sword—it works your shoulders and your chests quite well, so I love it,” he said. [E]

SmartPak Product of the Day: Your horses spending a bit more time in a stall these days due to ice/snow/frigid temps/gale force winds or injuries caused by a delightful combination of these seasonal delights? Let them entertain themselves with a Likit Boredom Breaker Starter Kit, which dangles nearly impossible to destroy goodies from the ceiling. Kind of like a (slowly) edible PlayStation for your steed.

Video of the Day: Last week Area IX suffered a stunning loss when Don Gerlach, competitor, volunteer, organizer, sponsor and best friend to all (man & beast), died suddenly. Teresa Craig, of the Powder Basin Equestrian Center, wrote this moving tribute. I’ll never forget the first time I saw Don, soaring over prelim fences at an Eric Smiley clinic in his iconoclastic form on his diminutive quarter horse, cowboy boots on his feet, toothpick in his mouth and a smile as bigger than Wyoming on his face. He was everything that is good about our sport. Here’s a video tribute by Hilary Carrel: