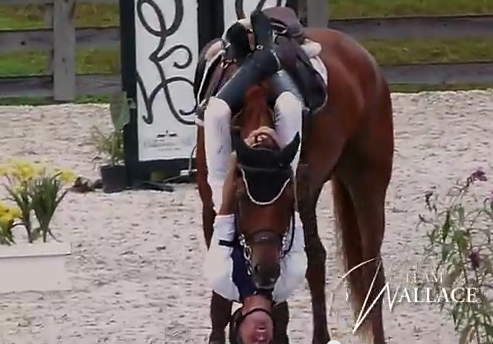 Last time I checked, the video of Rick Wallace’s showdown with gravity at Chatt Hills had over 80,000 views on YouTube–and he just posted it on Sunday. I think we can all agree that its celebrity is well deserved: When it comes to eventing cinema, what more could one want? A man fighting against the odds, struggling to snatch victory from the jaws of defeat, clinging to his horse’s neck like whats-her-face at the end of Titanic, “I’ll never let go!”… followed by the inevitable tragic-yet-honorable release. That’s the good stuff, Rick. Eventing Nation salutes you.

Top young British eventer Laura Collett, 23, is in intensive care following a cross-country fall on Sunday at Tweseldown Horse Trials. A message on her website says that she has been stabilized and that they “will know more over the next 24 hours.” [Laura Collett Eventing] An unconfirmed report indicates that the accident involved a rotational fall on the Intermediate course. [Horse Talk NZ]

As we reported yesterday, royal British eventer Zara Phillips and husband Mike Tindall have just announced that they are expecting their first child in 2014. Horse & Hound raises the question of whether expecting mothers should continue to ride and compete–did you know that Mary King won gold at the 1995 Europeans when five-and-a-half months pregnant? [H&H]

The Chronicle‘s Lisa Slade follows up on Tipperary Liadhnan‘s new life with amateur eventer Louis Rogers. Their partnership got off to a rocky start, owing to a freak trailer accident, but it sounds like everything is now happily back on track. [COTH]

USEF Eventing High Performance issued a reminder yesterday that Fall Grant Applications are due on July 15. For riders interested in competing at Blenheim, Burghley, Boekelo or Pau, now is the time to send them in. Applications are available here. [FB]

Best of the Blogs: The broken-ankled British three-star rider Jess Butler is taking a gracious approach to healing: “After all the bad news it was time for a much needed break, and what do broken eventers do? We volunteer at events.” [Eventing Worldwide]

Top of the Tweets: And… while Sinead Halpin is still in rough shape after her tumble at Chatt Hills, at least she’s got room service! Get well soon, Sinead! [Twitter] 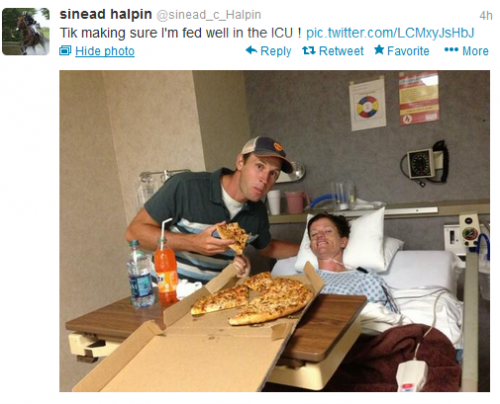