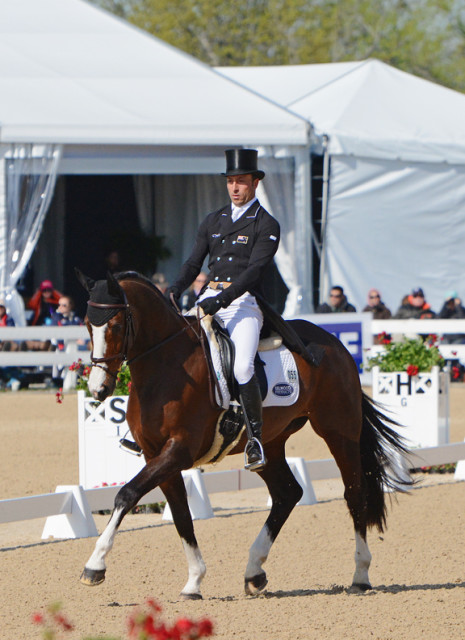 It wasn’t long ago that if a four-star rider cantered up the centerline in a helmet rather than a top hat, he or she was the exception rather than the rule. At the 2012 London Olympics, for instance, only two of 74 competitors went the hard hat route.

But a paradigm shift has been taking place for some time now, with U.S. Olympic dressage rider Courtney King Dye’s traumatic brain injury in 2010 spurring a helmet movement in the States and beyond. Allison Springer was the only rider to wear a helmet at Rolex that year.

Since then, American riders have largely been at the forefront of the revolution. Exhibit A: the 2014 World Equestrian Games in Normandy. While top hats still held the majority — 77% hats to 23% helmets — the U.S. team used the opportunity to make an unprecedented statement about where it stands on the issue of protective headgear. All six Americans riders completed their WEG dressage tests in helmets, with most of them wearing custom Charles Owen hard hats that complimented the team shads.

While helmet use continues to make inroads around the world — dressage Olympic and World Champion Charlotte Dujardin being a prominent example — the movement is still stronger within the U.S. than elsewhere. In line with that trend, since the Rolex field is comprised largely of American competitors, it boasts the largest ratio of helmets to hats of any four-star in the world.

The fact that the top placed riders — Michael Jung, Tim Price and William Fox-Pitt — all wore top hats came up during the press conference after dressage, and Michael and William were asked if they would ever make the switch to helmets.

Michael responded that he wears a helmet while riding young horses, but that it looks “not so good” in pictures. William explained that, for him, it boiled down to tradition. “It’s top hat and tails, not crash hat and tails,” he said.

The one thing that might make William consider losing his top hat: “It might take someone designing a slightly better looking helmet. I don’t want to look like I’m on a skateboard.”

Top international event riders are role models for riders both young and old, and choosing aesthetics over safety when it comes to dressage headgear doesn’t exactly send a great message, especially with the safety of the sport under a global microscope right now. Will it take an FEI dressage helmet mandate to loosen their grip?