It's that time of year again: spring flowers, warm weather and, most importantly, Rolex Kentucky. This year, we will be highlighting riders who are making their first appearance in North America's only CCI4* event. We recently touched base with Rolex Rookie Dana Widstrand and got to know a bit more about her OTTB, Relentless Pursuit. Thank you for your time, Dana, and thank you for reading. 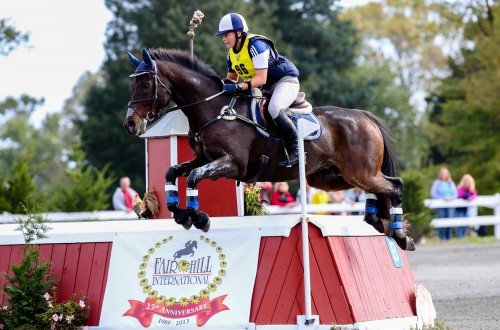 In order to succeed at any level in this sport, you must be hard-working, dedicated, and a tad bit crazy. They don’t call it “insanity in the middle” for nothing, do they? Sometimes, the most inspiring stories are those of people who have really had to make things work on their own, with little to no assistance from others. While she is certainly not the only one in this situation, Dana Widstrand is still a shining example of what it means to fulfill your own destiny.

Dana and her 17-year-old OTTB, Relentless Pursuit, are headed to their first CCI4* in Kentucky this year in a culmination of many years of preparation and work. Dana bought “Rover” as a 3-year-old off the track, where he raced under the name Super Rover, and can count how many people other than herself have been on his back. Together, Dana and Rover began their trek to the Bluegrass, running everything from their first Novice to their first Advanced together.

In 2008, Dana was a full time barn manager, groom, and working student while campaigning Rover at the upper levels. The pair qualified to compete at Rolex in 2008, and unfortunately the bay gelding suffered an injury that kept them out of competition that year. “In 2008, I kind of re-evaluated my life,” Dana said. “I decided I couldn’t be a working student forever. My parents helped me out when they could, but the reality was I couldn’t afford to do what I was doing any longer. For the last six years, I’ve been trying to find a balance of having a job that will allow me to afford the horse and the spare time to allow me to actually ride the horse. Fortunately, I now hold a position that has allowed me to achieve that balance.” 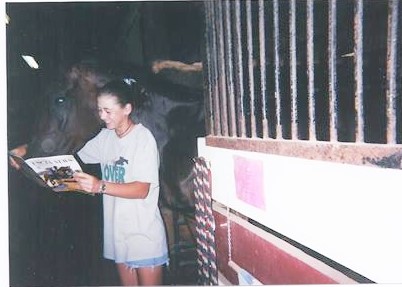 While Rover recovered from his injury and Dana tried to find the right solution for her career, the pair took some time off from actively competing. “I didn’t have a trainer who I worked with at all from 2008 through 2011 because it was not financially feasible and the trainers were all over an hour away from me,” Dana said. “I had to figure out my professional life before I could even think about returning to compete at the upper levels. I did a lot of self-education; watched a lot of videos, read a lot of books, and basically tried to learn as much as I could while I didn’t have a trainer who knew me or Rover very well.”

Dana and Rover came back out in 2011, starting slowly and finishing at the two-star level by the spring of that year. The pair had previously competed at Young Riders, which was Dana’s original goal. “He was never supposed to be a Rolex horse. I was looking for a Young Riders horse, and we were successful in 2003 and 2004,” she recalled. “After we moved up to Advanced, people began telling me that he was my Rolex horse. I laughed it off at first, but after he finished third in his first Advanced, it started to become a reality for me.”

Coming back from her hiatus from competition was more challenging that Dana originally thought it would be. “When I was a working student, I lived, ate, slept, and breathed horses. Now, I only have the one horse to ride, and I am also a bit older so coming back I was perhaps not as brave. It’s been a mixture of him getting older and not wanting to run him too much, even though he’s just been perfect.” Dana began working with Heather Gillette as she set her focus on Rolex once again, and Heather has been extremely helpful in Dana and Rover’s preparations.

Rover’s 18th birthday falls on the day of the first trot-ups in Kentucky this year. Dana is focusing on keeping Rover calm and focused in the dressage and is confident in their abilities to rock around the jumping phases. “If I can show him the way, we can get it done,” Dana said.

As far as future plans are concerned, Dana isn’t looking past Rolex quite yet. “I’m not unrealistic about his age. Even though people are usually in disbelief when I tell them how old he is, I still don’t want to overdo it. I will let him tell me what he wants to do. I would love to take him overseas to compete, but at this point it’s going to be all up to him.”

For those of you who are old or new fans of this Rolex-bound pair, Dana would like to remind you that she will be using the hashtag “#superrover” while she is in Kentucky, and she would love to get her horse’s racing name and nickname trending on social media while they power around their first four-star.

Many thanks to The Horse Pesterer for this footage of Dana and Rover at Fair Hill in 2013.