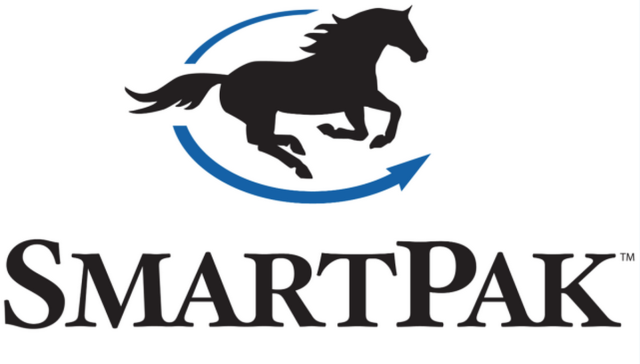 Michael Jung is making a habit of winning at the Kentucky Horse Park, following his winning WEG 2010 ride aboard La Biosthetique Sam with a winning Rolex 2015 ride on fischerRocana FST.

The excitement of Michael’s incredible win is only marred with news that Emily Cammock’s horse, Dambala, was euthanized today today following a suspensory injury on cross country yesterday. [Developing] Update 8:30 pm ET: [More Information on the Decision to Euthanize Dambala]

Scroll down for a play-by-play of the show jumping and check back with us throughout the day for much more from Rolex.
— 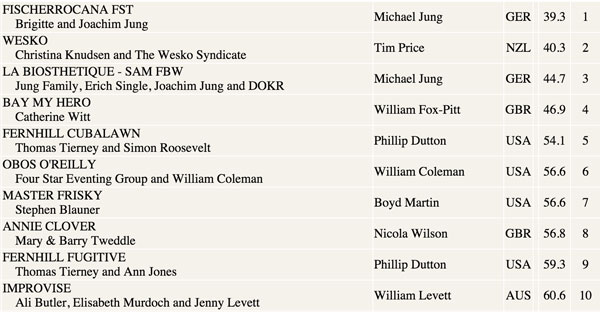 3:32 pm ET: Michael waves to a Kentucky Horse Park crowd that is getting used to cheering him on!

3:13 pm ET: Perfection was not to be this weekend for Michael Jung and Sam. Sam dropped behind his stablemate, fischerRocana, with two rails down.

3:09 pm ET: William Fox-Pitt received a huge cheer from the Rolex crowd upon entering the arena aboard last year’s champion, Bay My Hero. William rode with his typically perfect form to help Bay My Hero keep all of the rails up.

Boyd Martin and Master Frisky lower two rails and add two time for a final of 56.6 – the same score as Will Coleman. #rk3de

Colleen Rutledge and her homebred, Covert Rights lower 2 to finish on a 62.3 #eventinglive #rk3de

2:51 pm ET: There was no way that Nicola Wilson was going to let herself have two bobbles in one day of show jumping. She finished with a double-clear aboard Annie Clover. Excellent ride!

2:48 pm ET: There’s so much to learn in a rookie performance at Rolex. Perhaps the most significant lesson is the experience of riding a horse that is tired from a four-star cross country ride. Elisa Wallace and Simply Priceless perhaps experienced a bit of that learning curve, incurring 20 jumping faults. Nonetheless, I hope Elisa is thrilled with her awesome performance this weekend. Her ride on Saturday was incredible!

2:46 pm ET: Lynn Symansky and Donner finish a Rolex weekend that they should be proud of, with one rail down.

2:42 pm ET: Michael Jung and fischerRocana lay down a perfect round to put all of the pressure on Tim Price. The lovely mare can finish no worse than 3rd and stands within a rail of the lead.

Holly Payne and Never OutFoxed have 12 jumping for 81.0 #eventinglive #rk3de

nbsp;
2:33 pm ET: Sara Kozumplik Murphy completes a quality round with 8 faults aboard Fly Me Courageous. Clear rides are few and far between right now!

Tim Bourke and Luckaun Quality spends a lot of time setting up for 2 time and one rail – 78.5 #eventinglive #rk3de

2:25 pm ET: Colleen Rutledge and Shiraz capped of yet another excellent four star finish with an 8-fault show jumping round. Go Colleen!

Irish rider Austin O'Connor and Balham Houdini are clear and inside the time! Just the 2nd of the day. #eventinglive #rk3de

2:19 pm ET: Cody Sturgess and Imperial Melody bring us back from the break. Cody was originally scheduled to jump before the break, but Imperial Melody reportedly pulled a shoe in the warmup. The officials kindly let Cody take the time to get his horse’s shoe put back on by scheduling them in a later show jumping spot. The lone Canadian Rolex finishers ended what must have turned into a hectic day with 32 jumping faults.

Crackers finished his first #RK3DE feeling keen and full of himself and is now a bona fide four star horse. Colin Davidson would be proud.

2:02 pm ET: Boyd had 12 faults with Crackerjack. Hopefully that will be a good warmup for Boyd’s upcoming ride on Master Frisky. Go Boyd!

1:55 pm ET: Pirate was full of jump for Meghan O’Donoghue. Great round with one rail and two time!

1:49 pm ET: This course is causing all kind of rails, for experienced and inexperienced riders alike. Above, Buck with The Apprentice. Buck is an excellent show jump rider, but the course is getting the better of almost everyone right now.

17 faults for Erin Sylvester & No Boundaries. 100 is their final score. #rk3de pic.twitter.com/OgTkipGswU

Bunnie Sexton & Rise Against have 4 faults. They finish on 87.4. #rk3de pic.twitter.com/fb8K8p5geh

1:38 pm ET: Even the very best in the world get it wrong every once in a while. Nicola Wilson going bowling with Watermill Vision. We’ve all been there, Nicola.

1:34 pm ET: Lillian Heard and Share Option with the first double-clear of the day!

Rolex completion: check! A 4-fault round for Jennie Brannigan and Cambalda. #RK3DE

Was looking like a game of Pick-Up-Sticks out there until Laine Ashker and Anthony Patch came in and showed 'em how it's done.

1:28 pm ET: Imperial Melody reportedly lost a shoe, presumably in the warmup, so Cody Sturgess will be allowed to have that put back on and then show jump later, according to John Kyle on the USEF Network.

A rocky start for Ellen Doughty-Hume and Sir Oberon but it got smoother as they went: 16 jumping and 2 time for this pair. #RK3DE

1:21 pm ET Update: In awful news, Emily Cammock has announced that Dambala will be euthanized following an injury on the Rolex cross country course on Saturday. Thoughts and prayers to Emily and Oscar. [Developing] Update 8:30 pm ET: [More Information on the Decision to Euthanize Dambala]

161.4 for Angela Grzywinski & Novelle after an 8 fault round. #rk3de pic.twitter.com/NPYHEu5e2n

Amanda Wilson & Cool Descision start us off with a 43 fault round. They finish on a 201.6. #rk3de pic.twitter.com/fZeOKLpNOQ

12:55 pm ET: I spoke with a couple farriers this morning. We joked that farriers are about the only people in eventing who like muddy (soft) ground. The consensus was that the farriers had a fairly easy time of things overall, whereas the vets were busier dealing with soft tissue injuries. It sounded like there some issues with back and hindquarter soreness after the horses had to work hard to dig themselves out of the mud at every jump and then stay balanced on the landing.

12:48 pm ET: We’re just a few minutes from the start of show jumping at 1:00 pm ET. Good luck to all of the competitors! Go Rolex and Go Eventing!

Getting ready for an exciting & international @RolexKentucky finale. In glorious sunshine! pic.twitter.com/bWtzGUhQIX