While the 2020 Retired Racehorse Thoroughbred Makeover has been postponed to 2021, there are still dedicated trainers working with the horses they’d selected to be their projects for this year. Three trainers plus one team of four trainers have been blogging their journeys, including their triumphs and their heartbreaks, successes and failures, for Eventing Nation readers.

Earlier this year we met a team of four trainers from Dappir Ridge Eventing in Charlottesville, Virginia, and there have definitely been some changes for the team in the wake of the Makeover’s postponement. Here’s an update Adriana Nannini’s update — be sure to check out her website here. You can read the last Dappir Ridge blog here. 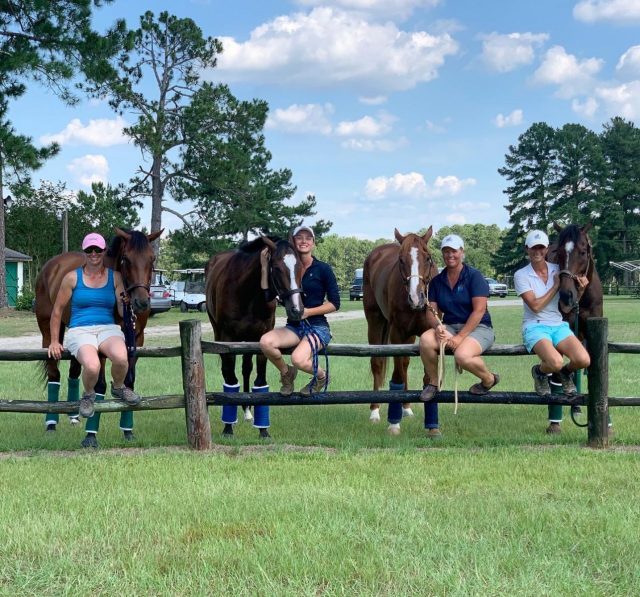 I think it’s safe to say we were all very disappointed when we learned of the Retired Racehorse Project Thoroughbred Makeover being postponed to 2021. A few of our Dappir Ridge horses are resale projects, and the plan for those guys was to keep them until after the Makeover, then sell them thereafter. Now, everything is up in the air, and we have to reshuffle our plans. But we horse people are pretty accustomed to throwing our best laid plans out the window, because we all know that with horses, nothing ever goes according to plan! So the “Plan B” tentatively involves a couple of our horses remaining with us to contest the 2021 Makeover, while a couple of the others will be sold, as originally intended, and replaced with new Makeover prospects for 2021.

Nonetheless, RRP aside, four of our baby OTTBs contested their very first event a couple of weekends ago at the War Horse Event Series at the Carolina Horse Park! It was a wonderful learning experience for all. Hunter’s Dream aka “Fox” as well as Robbie Jones contested the Beginner Novice division, while the greener Sevennotrump aka “Tricks” and Prince Attack aka “Prince” competed in the Maiden division. The great thing about the War Horse Event Series is the opportunity to school the day before. We hauled down on Friday, and rode the horses around the horse park, allowing them to acclimate to their surroundings and settle in a bit. Saturday was schooling day, so the babies all got to school both stadium and cross country. By the time competition day rolled around on Sunday, our four OTTBs were pretty much cool as cucumbers. I think we can all agree that each of them came away from the weekend far more mature than when they arrived!

A big thanks to High Time Photography for generously providing many of the action photos below of our baby OTTBs from the weekend! 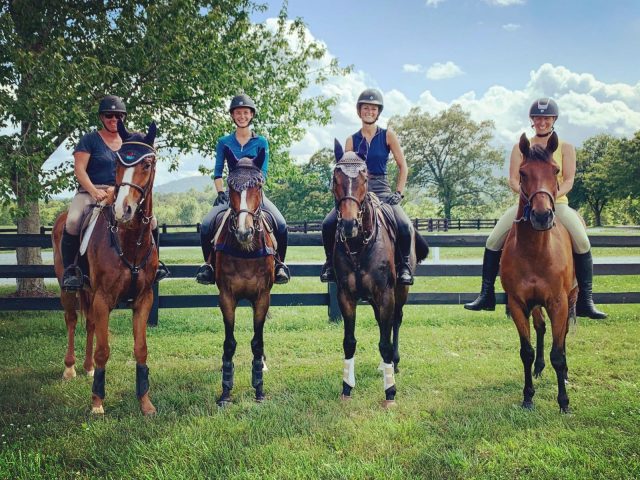 Sevennotrump aka “Tricks” (and affectionately nicknamed “Schnitzel”) had a great lead up to his first event. He had several sessions with Kiki’s cowgirl friend, Allie Farley, who was able to get through to his little brain by way of ground work. We also went cross-country schooling a few times, and took a field trip to a local hunter/jumper farm to practice jumping around courses in their big ring. As time goes by, it is becoming apparent what a ridiculously natural athlete Tricks is. At just 4 years old, he is able to canter around courses in a totally relaxed, rhythmic manner. His jump is effortless and scopey, and his canter is like sitting on a cloud. He is really going to be something.

When we first arrived at the Carolina Horse Park, Tricks seemed wide-eyed and overwhelmed, as were his fellow Dappir Ridge OTTB comrades. But after hacking him around the horse park a bit and flatting for a while in the dressage ring (the first one he had ever seen), he did settle. The judge’s box was VERY SCARY(!!!) so we spent a little while walking around it and sniffing it. There were so many new sights and sounds, and his little heart was hammering at a mile a minute, but he held it together like a good boy, for which I was very proud of him.

On Saturday, we began the day by schooling the showjumping. The course contained many [very scary] colorful poles, gates and oxers, which were at first rather overwhelming to The Schnitzel! I was able to eventually convince him that the jumps were not going to eat him, after which he took a deep breath and decided he could, in fact, jump them just fine. I also discovered, in the process, that Tricks is far more confident when cantering to jumps as opposed to trotting, so we spent the rest of the day cantering to our jumps which seemed to work better for us. We then proceeded to school the cross-country course. Baby Schnitzel really impressed me by putting on his big boy pants and jumping around all of those new jumps with ease, in a totally casual, relaxed manner as though he had done it all before.

On Sunday, Tricks trotted down his very first centerline and completed a relaxed, pleasant dressage test without jumping out of the dressage ring, or picking up the wrong canter lead, or spooking at the judge’s box – a far cry from the horse that couldn’t steer in a circle just a couple of months ago! He was an absolute pleasure to ride in stadium, cantering confidently and rhythmically around the course, jumping all of the jumps with ease. Coming out of the start box on cross-country, he initially seemed slightly less brave without his buddies there watching him, but I put my leg on and he obliged, gaining confidence with each fence. He jumped bravely through the water, over coops, logs, rolltops and little brushy tables. Nearing the end of the course we had an accidental drive-by to a plain brown log, but circled back and jumped it fine on second attempt, as well as the remainder of the course.

Tricks finished the weekend a much more grown-up horse, and I am incredibly proud of him. It is so rewarding to see the progress he has made in such a short period of time. I can’t wait to bring him back to the War Horse event in August! 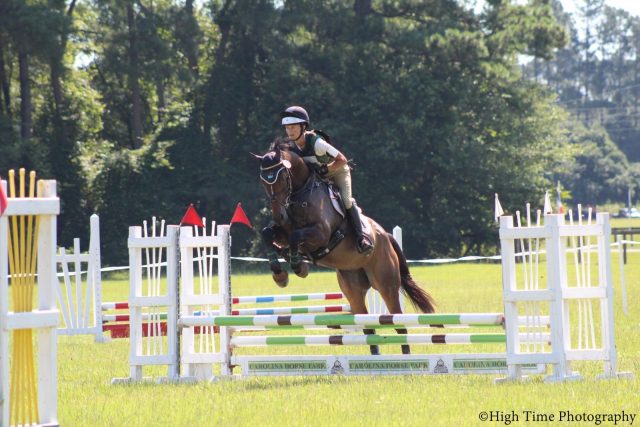 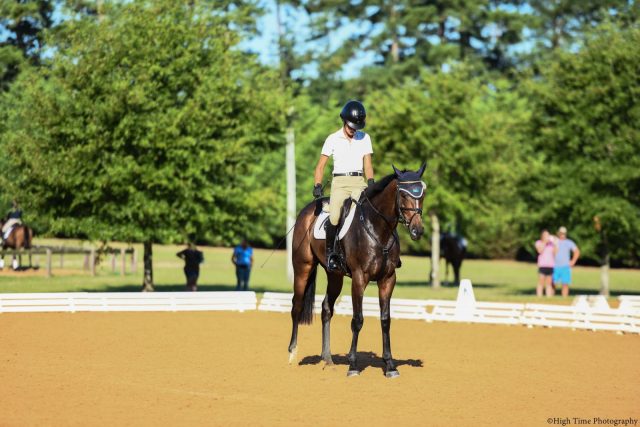 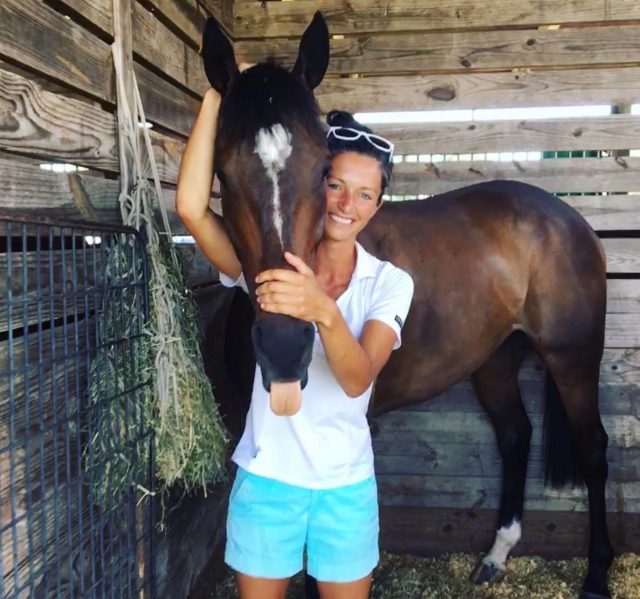 I was so proud of Robbie Jones at his first horse trial. We began our weekend with cross-country schooling. The warm up ring was definitely not Robbie’s favorite place.  He developed a new move that I later termed “the whirly bird”. The whirly bird involves a canter pirouette followed by a rein back and a turn on the forehand all in a row and performed at warp speed. I wasn’t sure if I was going to fall off or lose my lunch. We quickly opted to exit the warm up area and just go jump the beginner novice course, which was no problem for Robbie.

By the next day, we were both exhausted from the travel and 95 degree heat! He bravely marched around the dressage ring and only had a slight spook when somebody slammed the door of the port-o-potty. Robbie cantered around the showjumping like an old pro, but unfortunately was too tired to pick his feet up and we had a couple of rails.  Cross-country went fine but I had to kick a bit to make the time (and we were on the steeplechase track!).  I think I understand why he retired from racing! 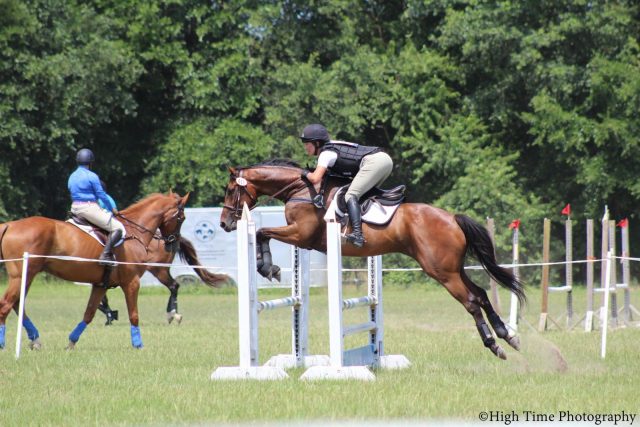 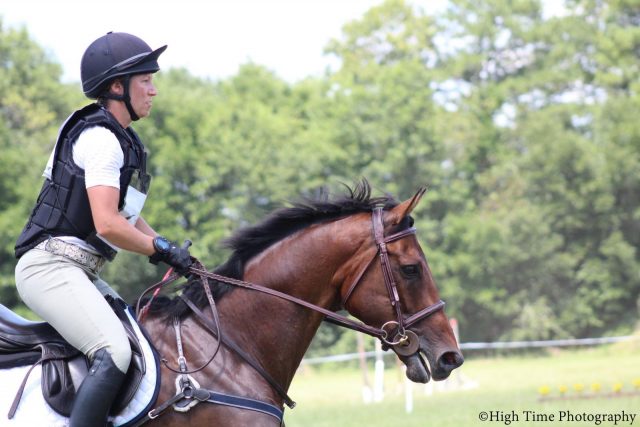 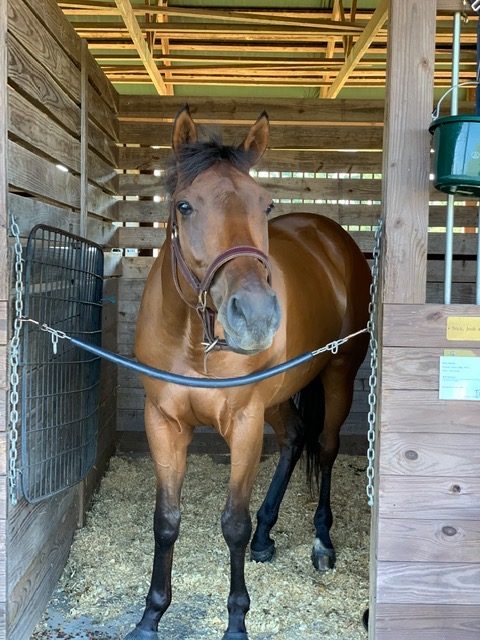 Robbie is such a handsome Thoroughbred specimen! Photo courtesy of Kelly Giunta.

Hunter’s Dream aka “Fox” went to his first real event two weeks ago with his other OTTB buddies at the Carolina Horse Park! The atmosphere was very busy and a bit overwhelming for Fox, but he eventually adjusted, and by Sunday seemed to be settled into his weekend accommodations.

We schooled stadium and cross-country on Saturday and Fox took a little while to get down to business, but once he did he rocked around like he does at home. Fox has a very enthusiastic jump, and one thing we’ve been focusing on is utilizing the half halt. He’s learning to jump off his hind end and that the long distance isn’t always the best distance!

The day of the competition, we warmed up for dressage in a very crowded warm-up under the noonday sun, but Fox handled the chaos very well, providing really solid warm up work. However, once we went off on our own to go perform our test, he became a bit rattled and tense. The test didn’t end up demonstrating what he’s capable of, but was still a very good learning experience.

Fox jumped around showjumping like a pro, and still had energy to jig his way to the cross-country start box. Galloping around cross country is always a blast, and he braved everything that came his way, including the water!

While we had already achieved our goal of the weekend, which was to have a positive learning experience for all the boys, we received the happy surprise that Fox had finished fifth in his Beginner Novice division! I’m looking forward to learning and improving for next time! 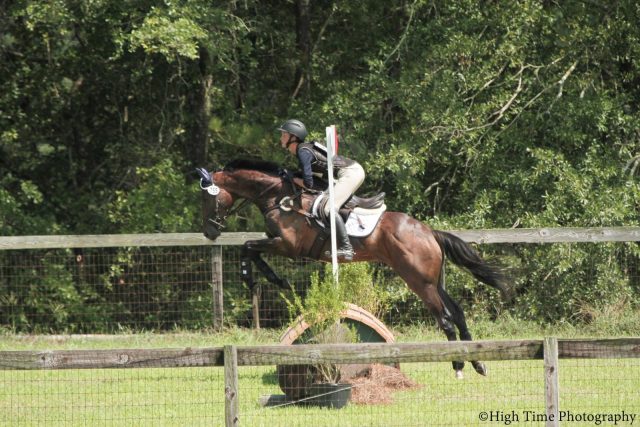 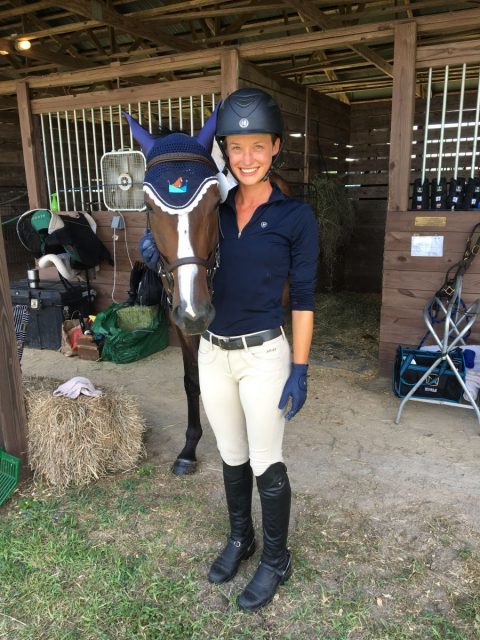 Alex and Fox sure do clean up nicely! Photo courtesy of Adriana Nannini. 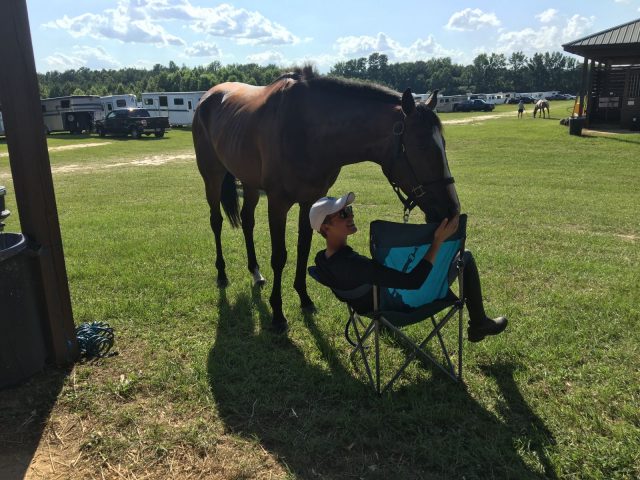 Fox and Alex sharing a quiet moment at the horse show. Photo courtesy of Adriana Nannini.

Oh Prince! Just as I predicted last time, since Prince Attack celebrated his 4th birthday at the end of May, he’s decided to act more grown up. The highlight of this past month has been our trip to the War Horse July Event. Leading up to this three day long field trip, we prepared by going on many small trips to different places. This gave Prince the low-stress opportunity to be comfortable doing his job at unfamiliar places. He rose to the occasion, and even got to go to a lesson! We worked on schooling him like a 6-year-old, even though he’s only 4. Basically the theory is to expect more out of him, and he should give you more! That mentality helped me a lot during the event in North Carolina.

“Mr. P” grew up a lot over the big weekend. He learned how to stay in a dressage ring, and not even spook at the sides or the letters…or the judges stand!  He also learned how to jump solid fences from the trot, and land in a quiet, balanced canter. I think he liked the water the best, especially from the canter.

His (and my) biggest challenge was the show jumping. On schooling day, he wasn’t so sure of the colorful show jumps, and consequently, we had to skip a few. After schooling cross-country, he came back to the showjump ring with more confidence than he had earlier. This is why I like the schooling series so much! It is so important for the youngsters to have a good experience.

On show day, we were able to put most things together- minus a few oxer rails in the showjump ring, and a random red roll top that apparently Prince forgot he had jumped the day before- but that’s all ok!  It’s all part of the journey with a young horse. Next time will be better!

Without the RRP Thoroughbred Makeover to aim for in October, we will try and do a handful more field trips, and one or 2 more events at the Carolina Horse Park, but then Prince will make his way back to his owner in the Midwest. We will definitely aim him at The Makeover for 2021. 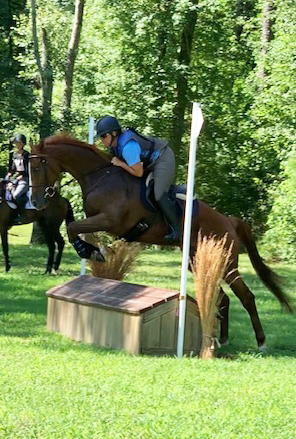 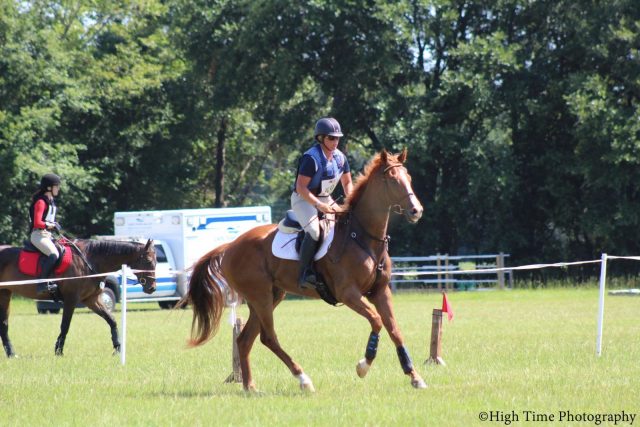 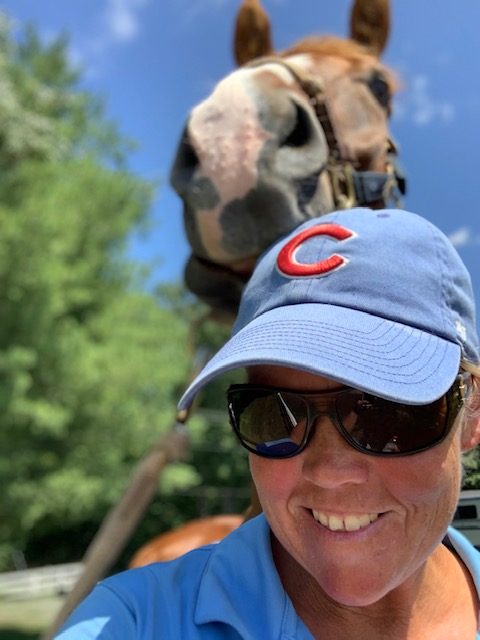 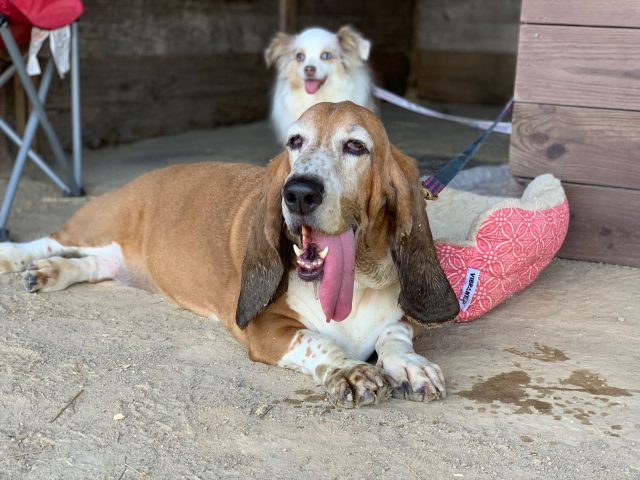 Our furry weekend sidekicks enjoying a reprieve from the 100-degree Carolina heat in front of a fan in the stabling area! Photo courtesy of Kiki Osbourne.