Remember the good old days of magazine advertisements for horses? Whether you grew up circling your dream horses in the back of Horse&Hound or, like me, you lived in rural New England and picked your horse of a lifetime out of the weekly Uncle Henry’s, the sport of window shopping is as time-honoured as the sport of actually riding a horse itself. These days, we’re spoilt for choice: I, for one, end up down an endless rabbit hole whenever I’m asked to pick out my favourite listings in Sport Horse Nation, and I can happily browse HorseQuest for hours. So deep is my love for daydreaming about horses and trying to spot future champions that I’ve even picked up a little side hustle sourcing horses, which is just about the most fun a gal can have, frankly. Even better? The special days when I’m asked to have a browse through an auction catalogue and pick out some eye-catchers. I’m delighted to be heading to Ireland this month for the Goresbridge Go For Gold Sale (November 14-16), and so, to prepare for my big trip to come, I took a deep dive into the newly-revealed auction catalogue, and picked out the horses I’ll be keeping a particularly close eye on when I’m there. I tried to keep it to a top ten, but like any good horse-shopaholic, I have no willpower, so here’s my eleven favourite horses from this year’s line-up. Happy bidding! 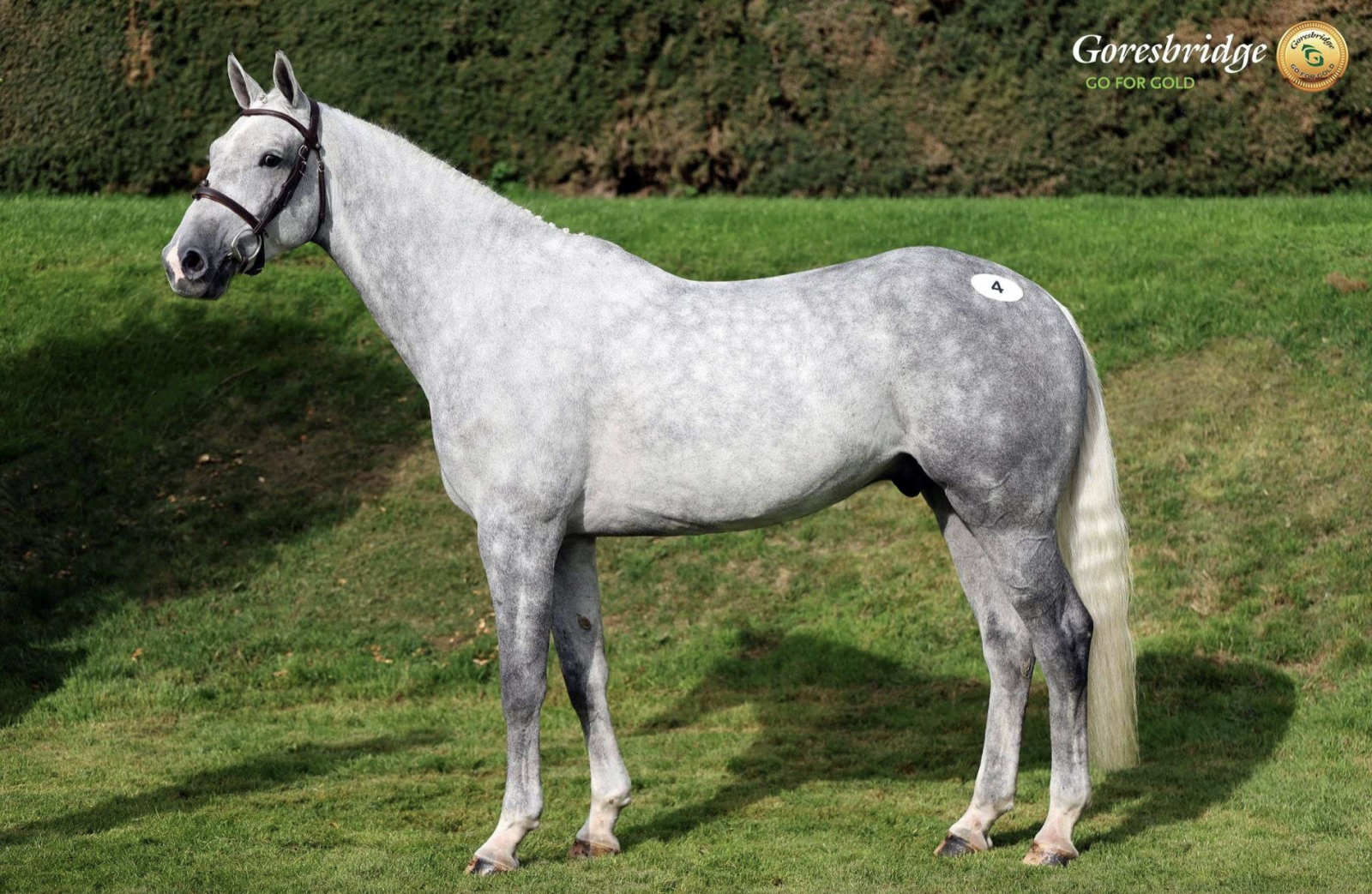 I spend half my time living in a glorious fantasy world, in which I have a healthy chunk of expendable funds that I can use to pick up young, talented horses and produce them to sell into uniquely American niches. Flintstone ticks all my boxes there: he’s got the style to go nail the hunter derbies, but the scope and canter to succeed across all three US hunter/jumper disciplines, frankly. In this fantasy world of mine, I’m also the only person who would ever possibly have this bright idea, so I’m sure no one else will scoop him up and sell him for six figures in six months’ time. Oh, hang on, spoiler alert — I think that’s exactly what’s going to happen. 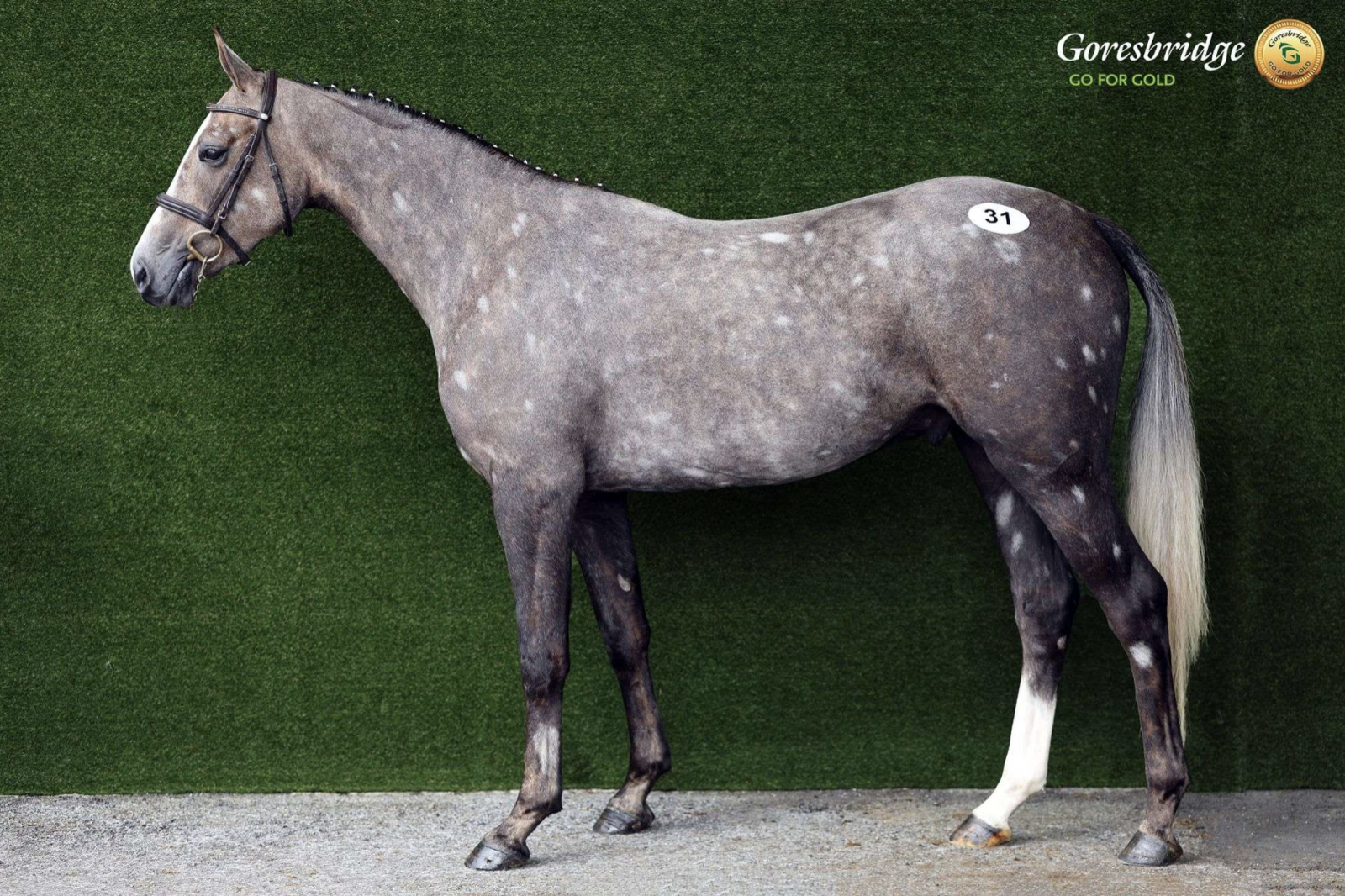 I know you lot love a grey, so I’m going to skip ahead a bit in the catalogue here and keep everything monochromatic for now. I love how blood this three-year-old looks, and the quality that the Zangersheide lines bring to the table make him a really attractive sport prospect. He’s also enormously commercial, because we’re all a sucker for a bit of colour and a sweet white face, and his spotty botty and rose-grey hue mean he’ll be an eye-catching prospect if produced for resale. I could see this being a really fun young rider’s horse or competitive amateur ride in a few years’ time. 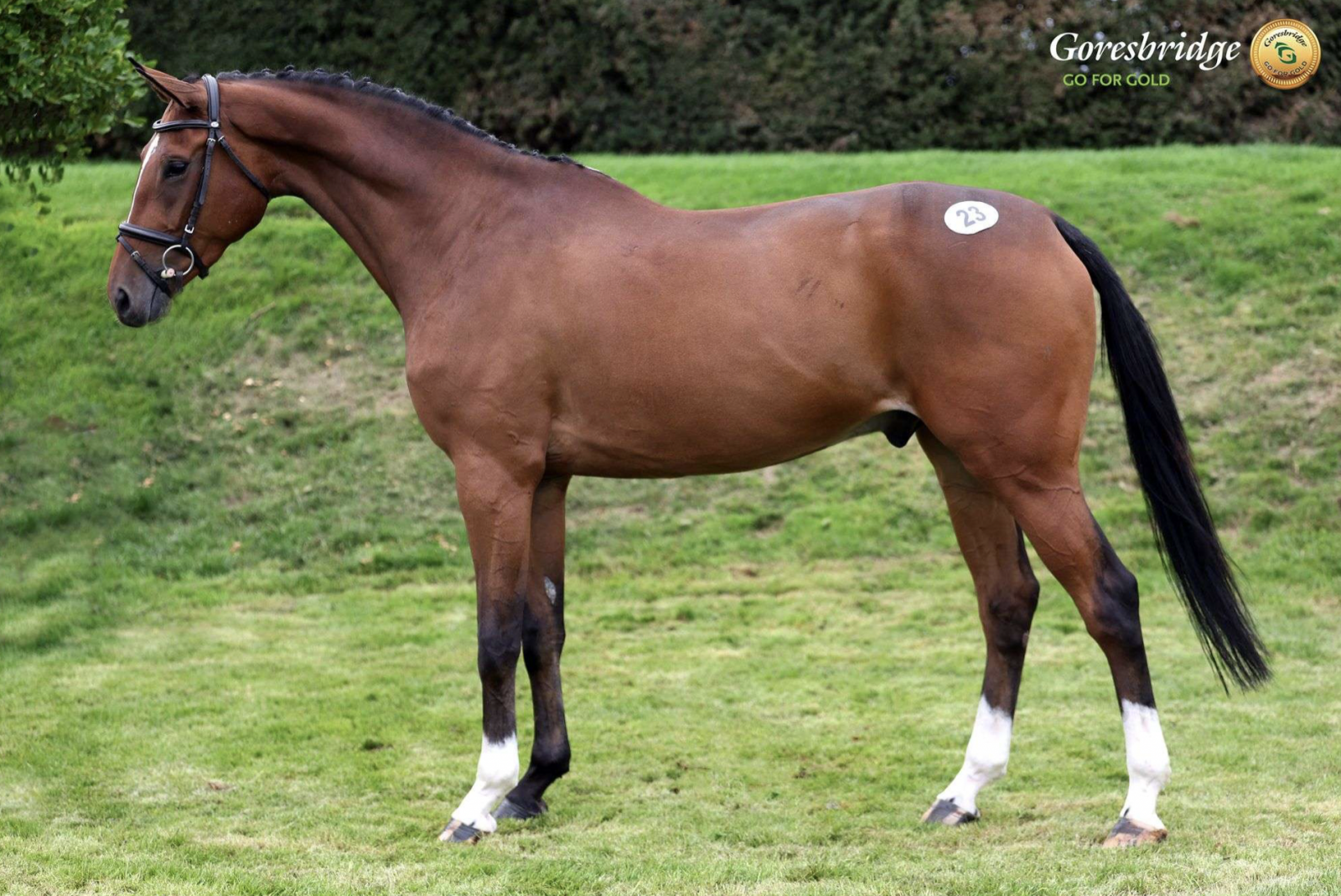 Everything about this compact, athletic four-year-old looks fun. He’s got a great, naturally balanced canter and a sweet, neat jump — plus, I love how he really takes the time to analyse where he needs to take off and makes a tidy job of it as a result. I think there’s talent to burn there, but I also think this would be a super project for a young rider who wants to produce their own horse to go on and tackle some teams with. The whole impression here is of a horse who wants to please and likes his work, and that’s the sort of youngster we all like to climb aboard. 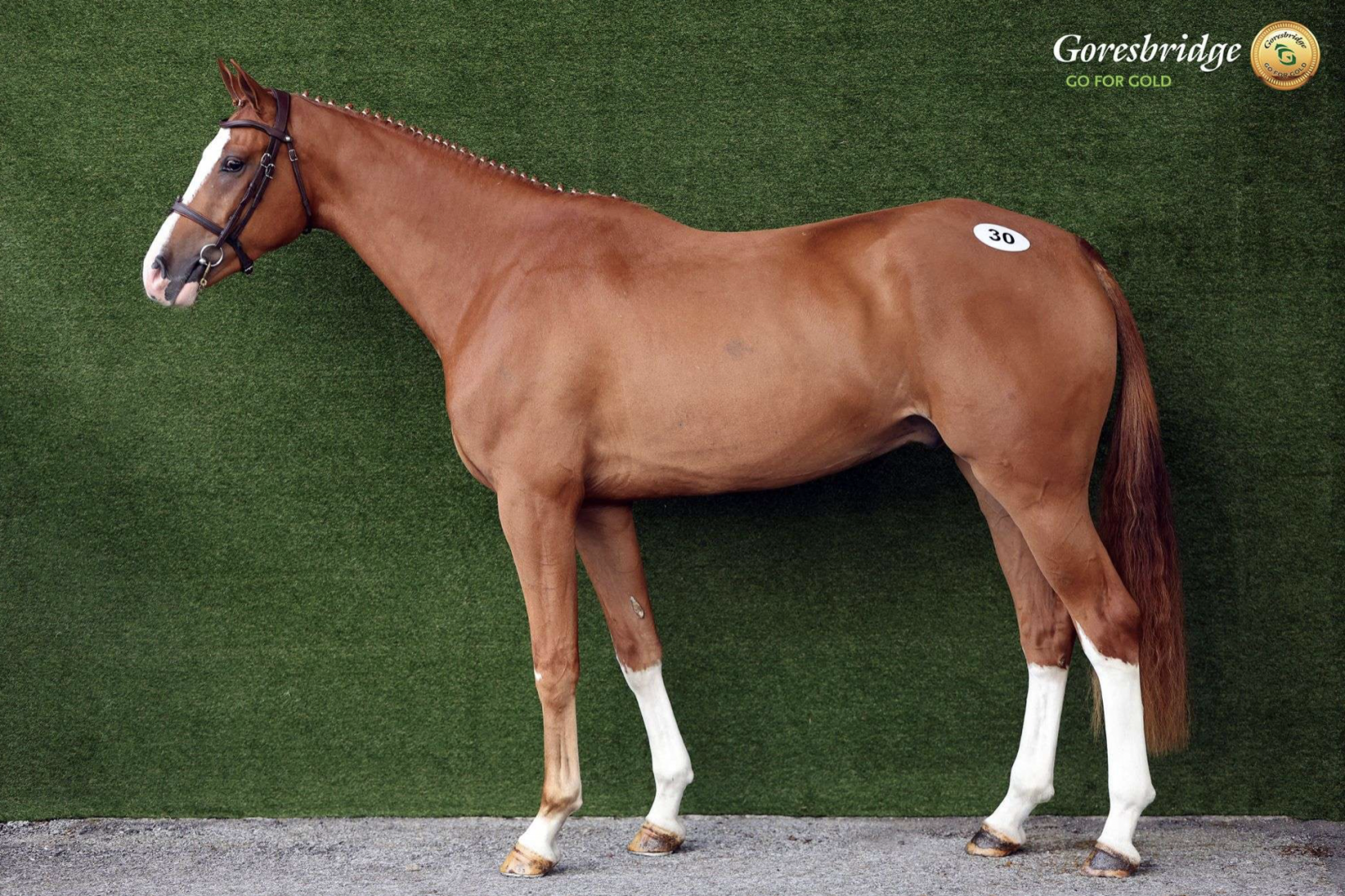 Each year, I’m more and more impressed by MBF Sporthorses, the production and sales business operated by Co. Waterford’s Brian Flynn and Meabh Bolger. Generally speaking, my favourite lot in every Irish sale comes from their place, and this flashy chestnut is yet another excellent stamp. He reminds me, in many ways, of TMX Herby, the former ride of the Netherlands’ Tim Lips and a horse I unabashedly adored, despite the fact that every time I tried to bribe him into liking me, he just determinedly hated me more. I feel confident I’d have more success with this chap, and I intend to test that theory at the sales. Even if he, too, hates me, though, he makes up for it with an extraordinary natural lightness that I can’t help but love: even though he throws a huge jump, he immediately lands in balance, allowing him to travel on. That’ll be a seriously handy trait in the years to come, and no doubt comes, in part, from his maternal great-granddaddy, the excellent Cornet Obolensky. 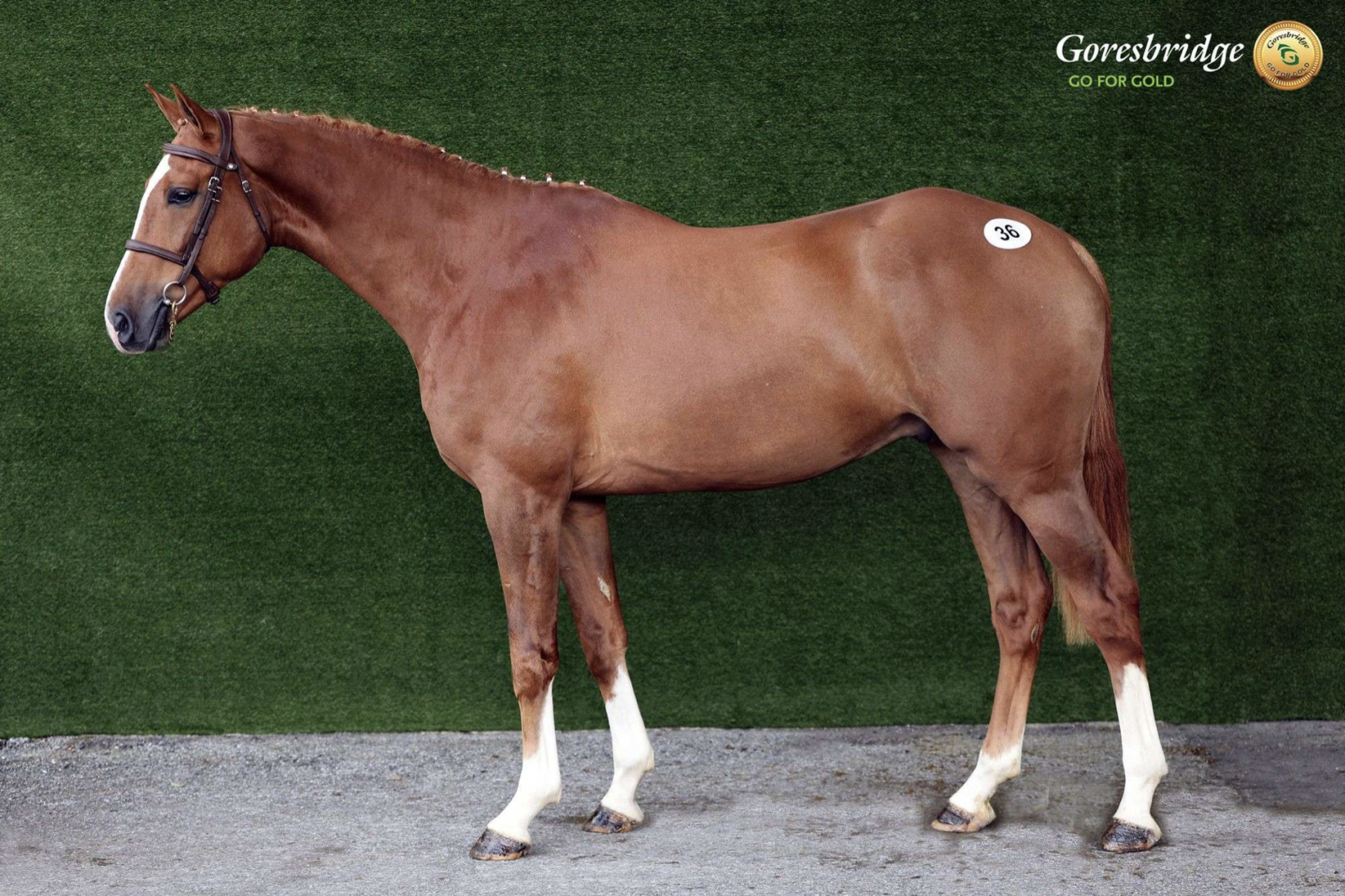 If one athletic chestnut gelding with a tonne of chrome wasn’t enough — and is it ever, really? — meet the second of my Big Orange MBF Crushes, the delightful Otasia. What initially drew me to this gelding, who has some serious jumping lines on top and bottom, including Quidam de Revel and Darco through his sire and Cor de la Bryere and Nimmerdor through his dam, is the twinkle in his eye. I just KNOW this talented boy is going to make his new person laugh every day, whether that’s through comically spooking at his own farts, making faces and throwing buckets over the stable door, or simply through serving up *that* cheeky head-toss after every fence. He’s got clown vibes in the best possible way, and I hope that he finds someone who finds life as much of a lark as he does. He’s pretty well-matched with Castlecomer in terms of talent, though if I’m being picky, I’d say his lower hindlimb and hoof conformation slightly edges the win for me — but both horses are super special, and I can’t wait to see them in the flesh. 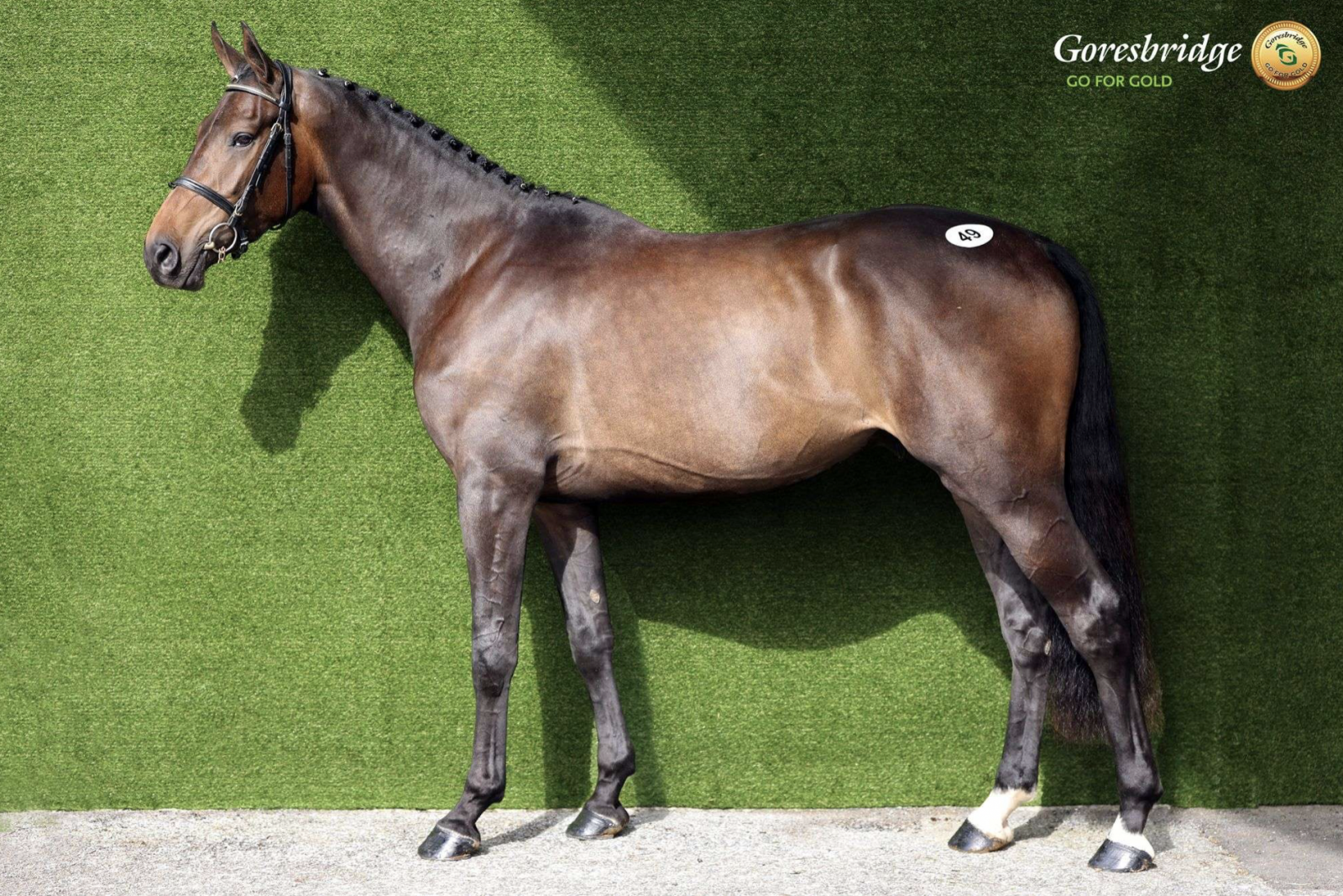 I love a Diarado, and this paternal grandson of the German stallion has really been stamped by him. He’s got the Diarado head, the easy jump, and the loose movement that makes the sire so coveted, and I’ve often found that the line brings forward a real clever trainability, too. I like the look of this horse a lot, and I suspect we’ll see it go the way of a good professional, who’ll be happy to give him a year to continue filling out so that his front end catches up to his slightly croup-high back end. 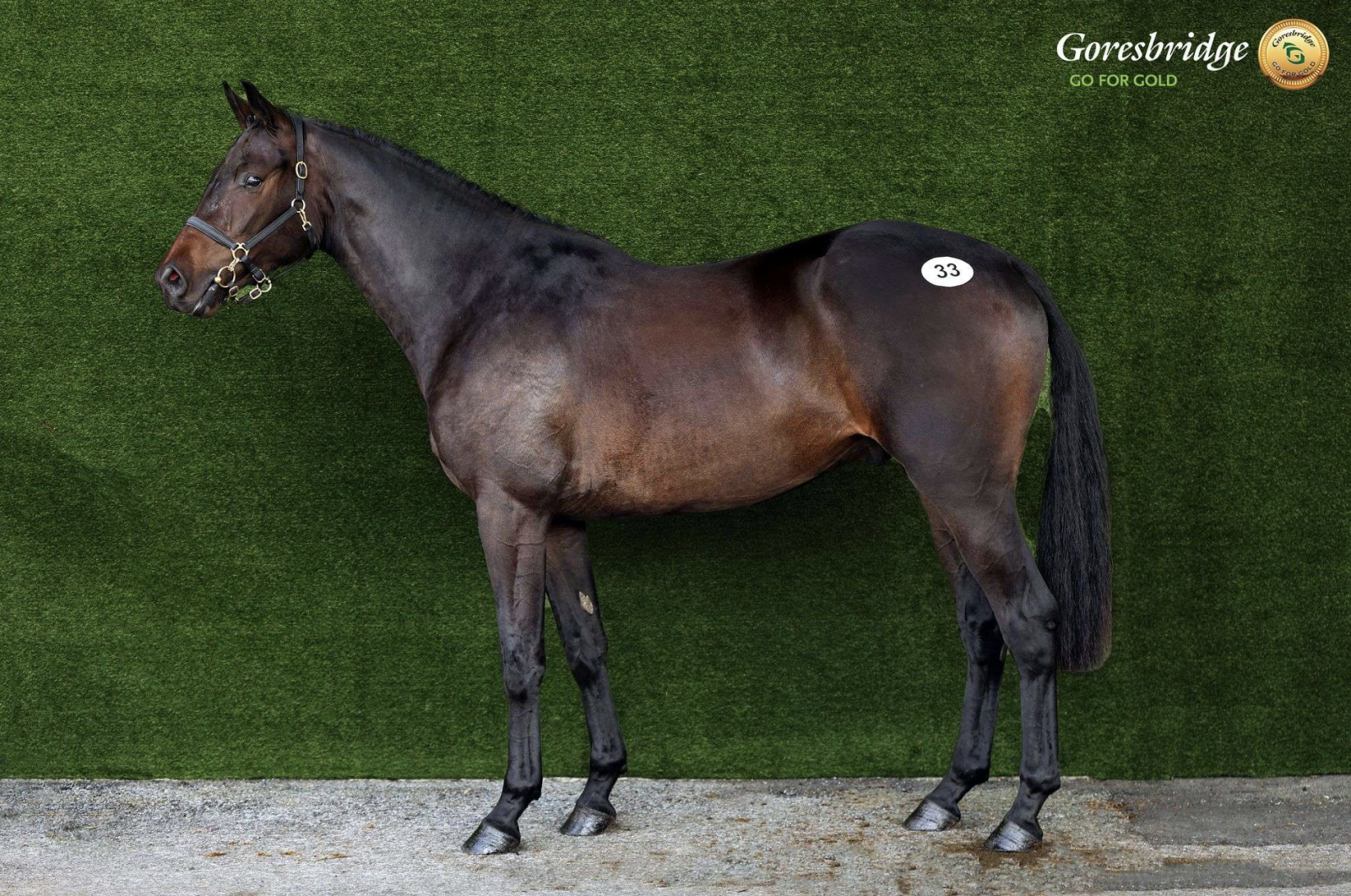 Speaking of Diarados, this own son is another really nice sort with a tonne of ability and balance. Every time I see an unnamed horse pop up in an auction, it makes me think of the delightful Italian rider Filippo Gregoroni, who has a very good horse that he’s campaigned at the Young Horse World Championships, who is actually registered as Unnamed. I don’t actually know the story, but my best guess is that a language barrier got in the way somewhere there, and when the horse was bought, they assumed that was actually his name. It’s the kind of harmless whoopsy that I live for, frankly. 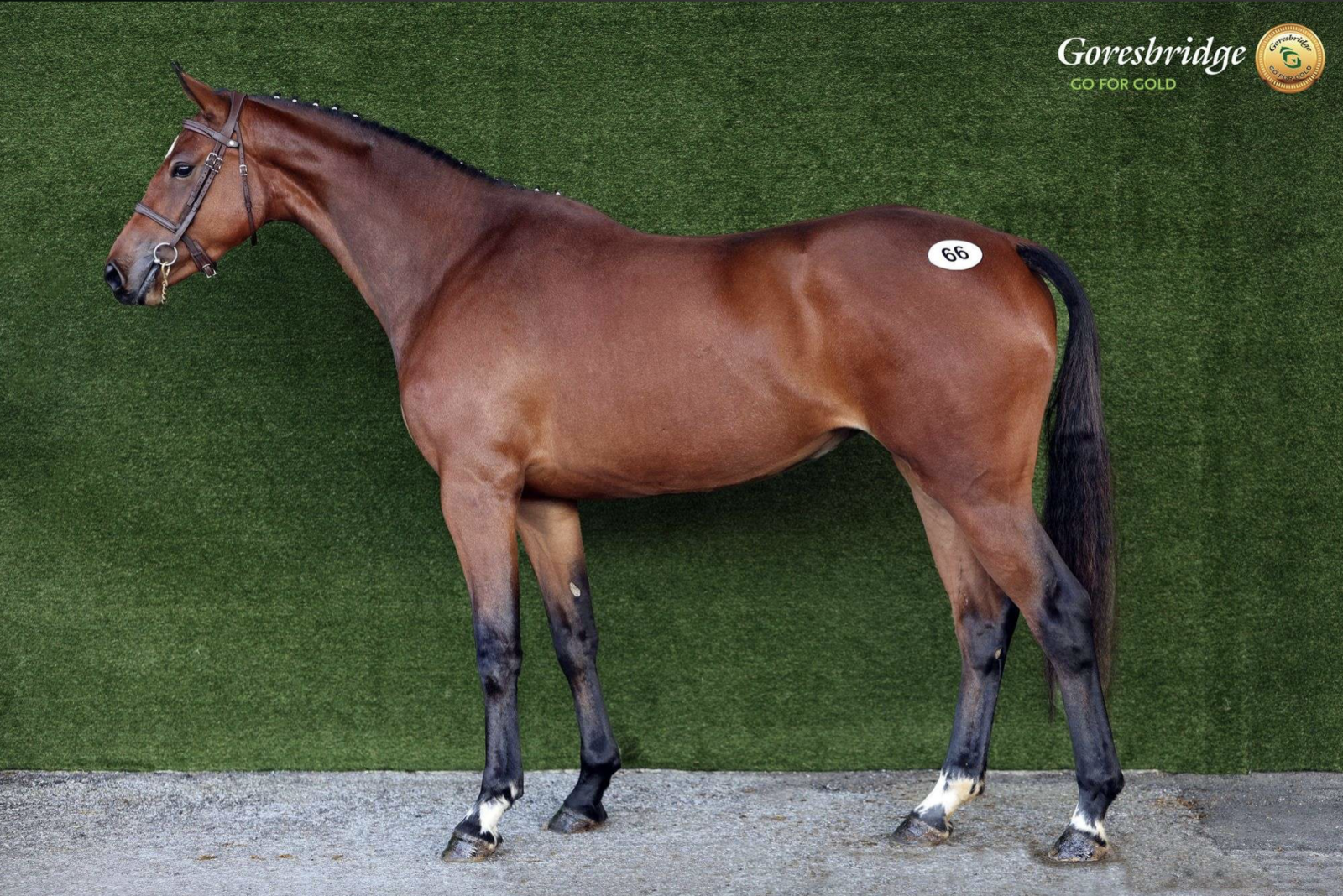 Talk about a leg at each corner: this sweet filly is beautifully put together with plenty of strength through her hindend and a real oil painting countenance that I find totally irresistible. And she can move and jump, too! With great jumping lines top and bottom, plus some classy Thoroughbreds just a couple of generations back (and a maternal great-granddam called Great Tilly, delightfully), she’d be as useful as a breeding prospect as she is as an athlete. 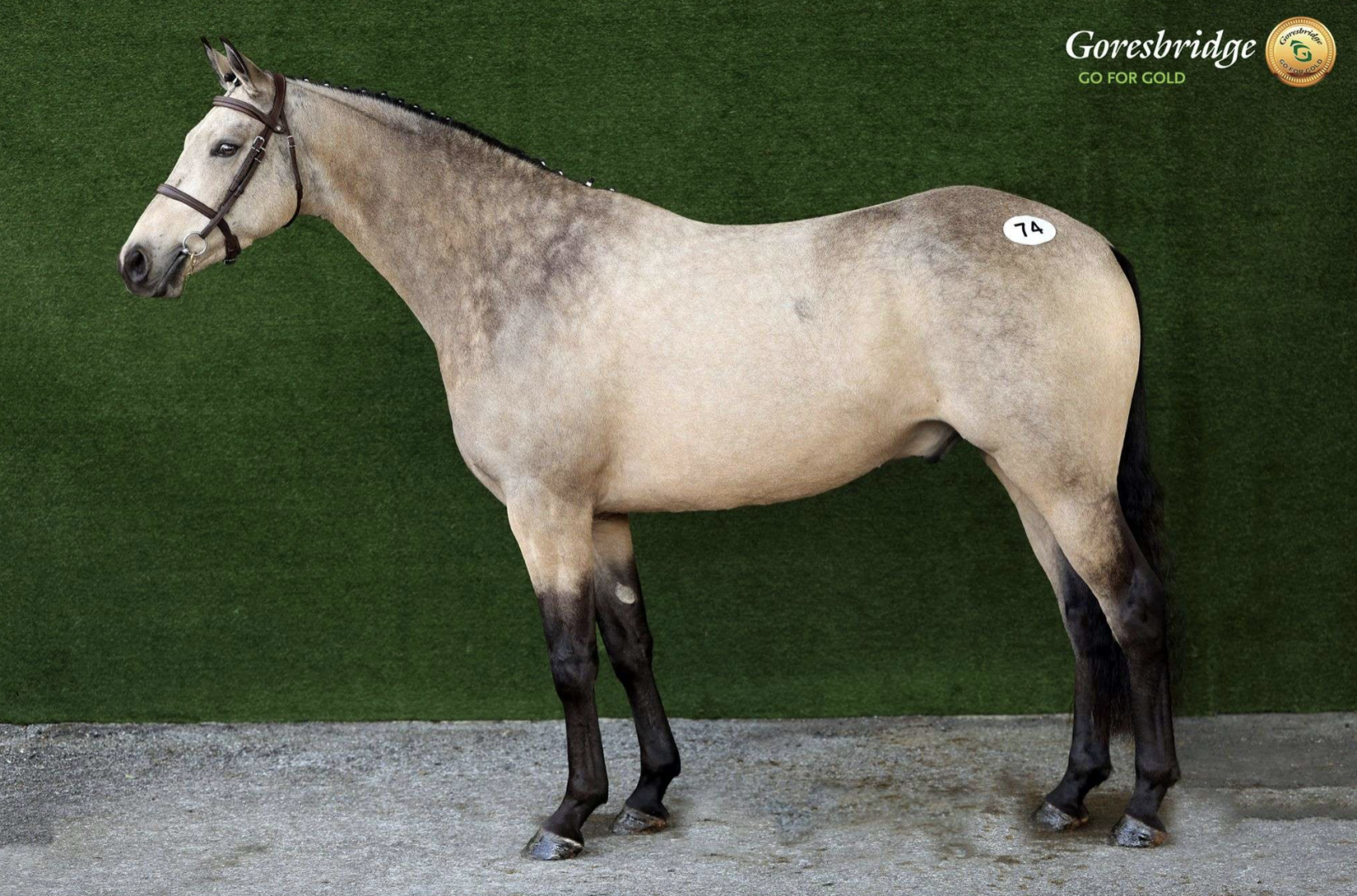 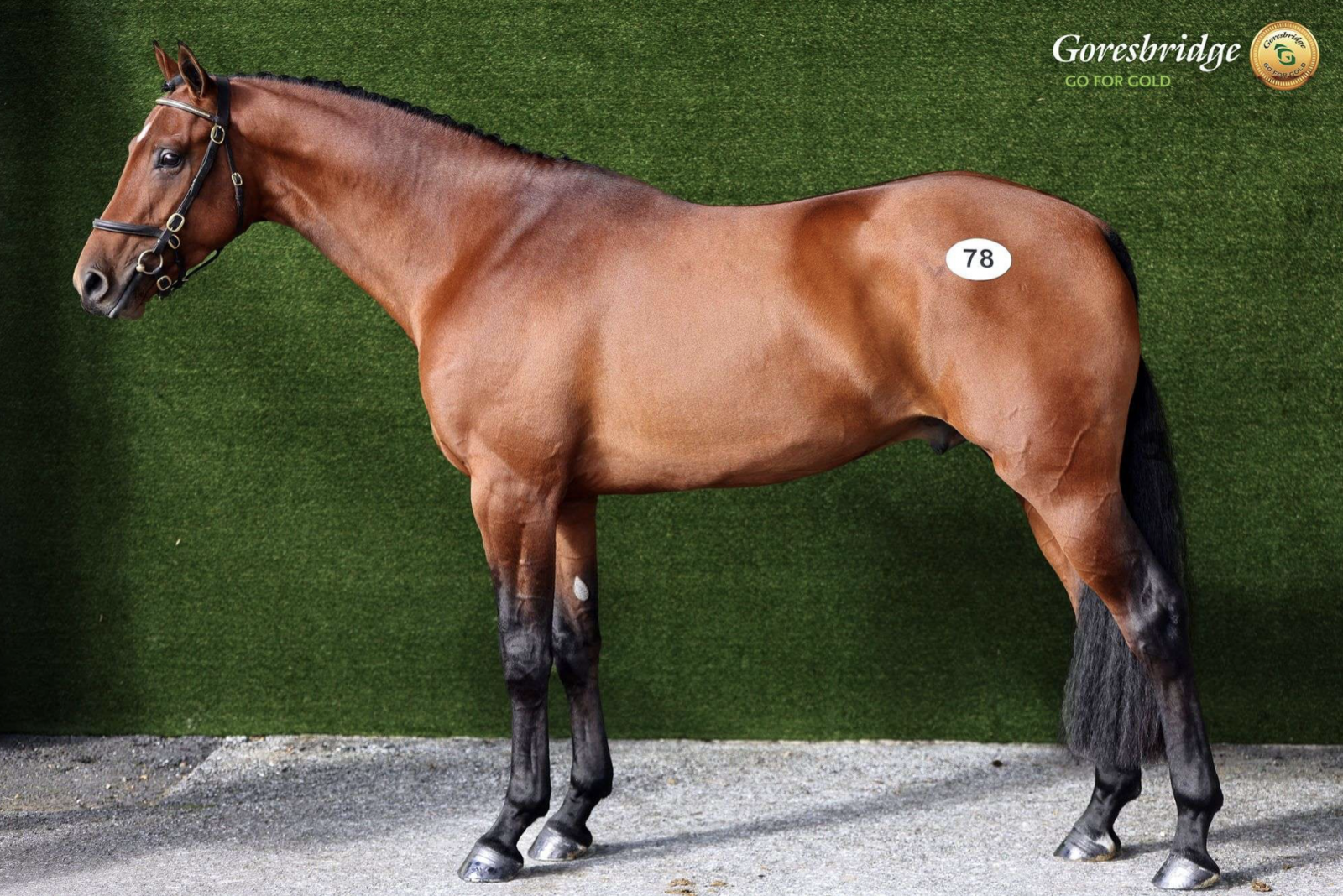 Generally speaking, this striking chap wouldn’t actually be my type of horse – he’s quite big, and I like a pony on steroids; he’s uncut, and I prefer my men to have had their undercarriages cleared out, frankly; and he’s an extraordinarily powerful, scopey jumper. Okay, okay, that might seem like a really odd gripe to have – after all, we all want to spend our hard-earned pennies on something that can actually get to the other side of a fence. But when a three-year-old is particularly showy over a fence, I start to worry that it might be too careful to make a great eventer, or that it may have been overproduced at an early age.

But this guy? I can’t stop myself from going back to his videos, because it doesn’t look at all like he’s been overproduced — it just looks as though he’s having the most fun ever. Do I want to try to sit that enormous effort? Probably not! But will I be achingly curious to see which strong-cored pro picks this obvious talent up? Totally. This is a horse whose progression I’d love to watch. 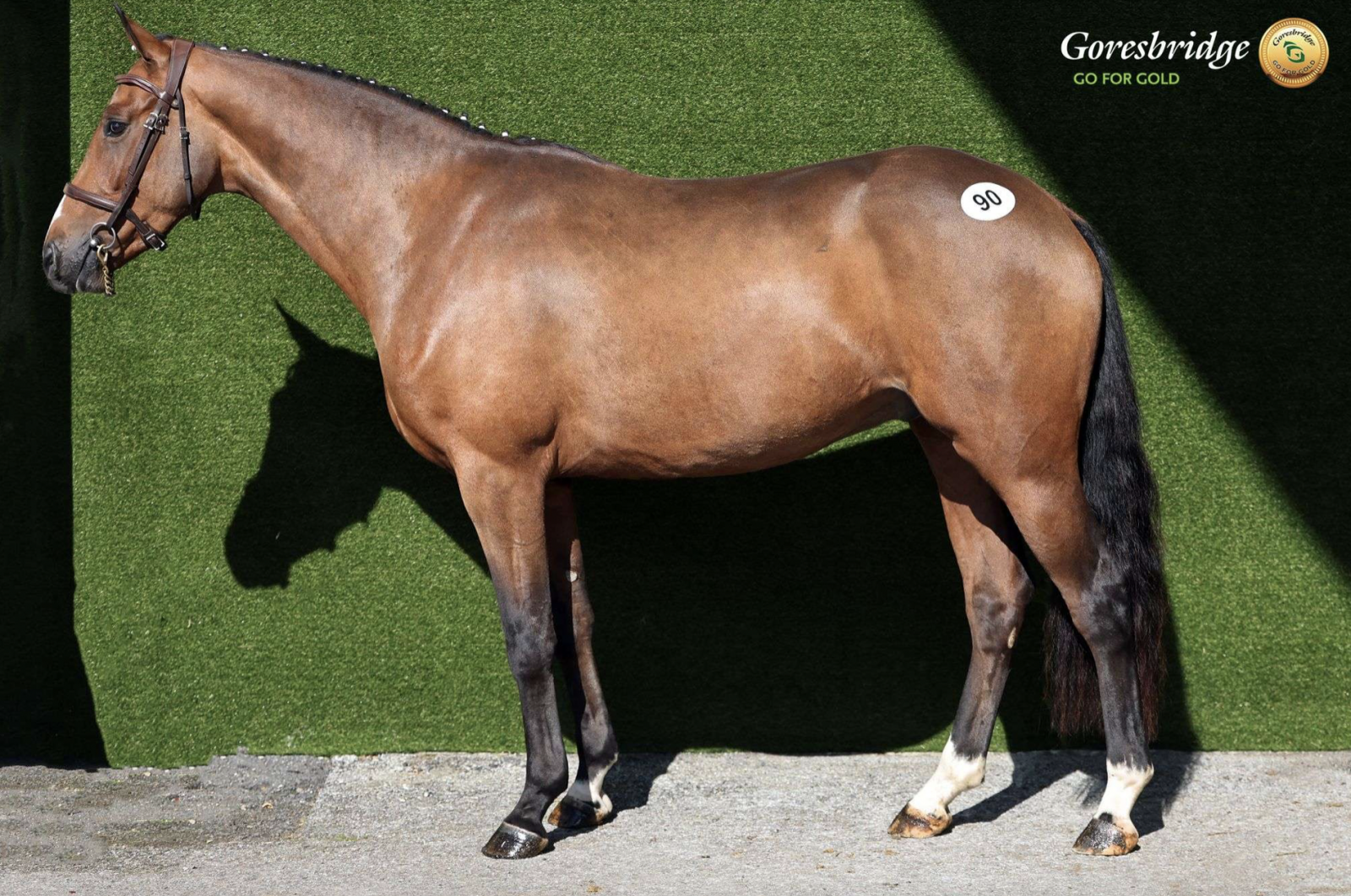 I promise, I’m not actually being paid off by MBF Sporthorses here — they really do just have a seriously nice collection of horses in this sale. This one ticks a lot of boxes for me: he has a great name (Mystro Max! He sounds like a superhero!), a great hind end, and a great jump. I also love his sweet, cheeky expression, which suggests that I might sit a couple of good dance moves through his younger years if I buy him, but that it’ll all be worth it for the things we’ll win, too. He’s ‘bred in the purple’ on the bottom and the top half, which is much more continental, has him closely related to a German horse I once had the ride on, so that feels like a good enough omen. This one looks much better quality, for what it’s worth.

As a bonus entry, I also have to put forward Lot 3, who wins the prize for the best name of all the horses in this year’s sale. My totally non-horsey boyfriend is constantly disparaging of odd horse names, and has taken to referring to any horse with a slightly silly name as ‘Filly of the Bush’. Therefore, he was as delighted — or perhaps horrified; I don’t know — as I was to click into the catalogue and find the exceptionally-monikered Red Hot Chilli Filly. I would buy her ten times over just for that name. It is, truly, a work of art.