EN TRENDS:
Sara Kozumplik-Murphy is at the Bolivarian Games in Lima, Peru to help coach Team Venezuela riders Natascha Barrientos and Maria Suarez Garcia (“Gaby”).  The Bolivarian Games are a mulit-sport event among six nations held every four years to honor El Libertator, Simon Bolivar.  Bolivar was credited with starting the fight for independence for six South American countries: Colombia, Ecuador, Peru, Bolivia, Panama, and Venezuela.  The Eventing portion of the Games is a CCI* championship.  Many thanks to Sara for writing, and thank you for reading. 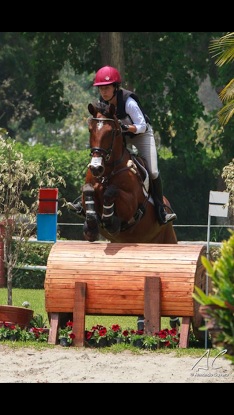 What an up and down day here in Lima for Team Venezuela. Both Miguel Sarmiento and Alvero Lozado fell at the 6th fence, an angled one stride on a tight distance. Alvero might have managed to keep his beautiful mare upright when she hit the out very hard, but the log followed him and caused her to fall. This happened twice more in the competition. I do not think the question was too difficult for the level, but serious attention must be paid when xc fences are not constructed properly. That is not the definition of a frangible fence! We were lucky that the only injury that occurred was a broken arm for Alvero. Things could have been much worse.

Maritza also had trouble at this fence, not getting the line quite right, which caused a run out at 6b. She quickly corrected her mistake, and went on to jump around the rest of this tough course clear. She is planning on coming to the USA after this to train with Kyle, which is a smart move and exciting for this Venezuelan’s future in the sport. 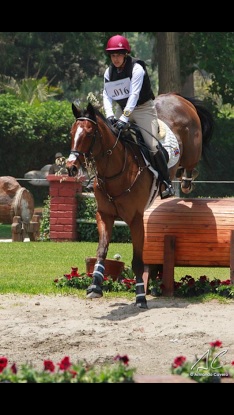 As for my girls, I had an up and down day also. Natascha rode amazingly well, putting in an absolutely beautiful round on the perfect fat little Clifton Peekachu. I think he is the only horse I have ever known that gains weight on a trip like this. I actually think he was fatter after the cross country? Joking aside, they are a well matched pair, and were class today. As for Gaby, she had her first mistake since she came to us. The back part of the cross country was maze like, and she jumped a fence out of order. Absolutely devastating for her as she was having a lovely round on the magic Irish Diamonds. We have all made these kind of mistakes, but it is horrible when it happens at a major championships rather than a local event!

However, they have worked so hard on the nearly impossible goal of going from having never evented before, to representing their country at a CCI* Championship in less than 6 months. Sometimes you have to pause for a minute and see how far you have come.  They looked like they belonged out there today……actually they looked better than the majority. I want to thank Peekachu and Reno (Irish Diamonds) from the bottom of my heart. What amazing teachers they are, wonderfully patient and generous. Thanks for taking care of our girls, teaching them how to ride, and making their dream come true.

Finally our only experienced upper level pair, Elena Ceballos and Frenchie (Nounours Du Moulin) skipped around the course, making difficult lines look like a walk in the park. This was my first opportunity to watch this pair in action, and I was impressed! It was the best way to end a largely disappointing day for Venezuela.