There’s a fair bit of international action happening this week, including all of the ponies you could possibly want at the FEI European Championships for Ponies. We’ve also got Tilly Berendt on the ground at the NAF Five Star International Hartpury Horse Trials, and you can catch up on her coverage here.

A smaller field of riders crossed the newly-opened Canadian border to contest the Bromont Horse Trials, which is hosting divisions from CCI4*-S down through Training level.

Making the trek north for a first run since the Land Rover Kentucky Three-Day Event is Australia’s Dom Schramm with Team Bolytair B LLC’s Bolytair B, and so far the trip’s been well worthwhile as the pair moves into the provisional lead following show jumping this afternoon. Dom and Bolytair B were one of two clear rounds inside the time, ending their day on a score of 31.0. Dom is on a bit of a “boy and his horse” adventure this week, having forewarned his friends that he was traveling solo!

Canadian rider Brandon McMechan and Oscar’s Wild won the dressage but lowered one rail in show jumping to sit second ahead of cross country on a score of 33.3. Brandon and Oscar’s Wild, a 12-year-old Thoroughbred gelding, have come up the levels together, also spending some time in the show jumping ring for extra practice. The pair moved up to Advanced in 2019 but have a relatively light competition record, selectively choosing their events.

Third in the CCI4*-S following the first two phases are Alex Baugh and I Spye, a 10-year-old Irish Sport Horse gelding originally produced by New Zealand Olympian Jesse Campbell (with Jesse, I Spye finished fourth as a 6-year-old at the World Young Horse Breeding Championships at Mondial du Lion). This pair will take a score of 33.9 into tomorrow’s cross country.

Fourth and rounding out the CCI4*S are Canadian pair Lindsay Traisnel and Bacyrouge, a 10-year-old Selle Francais gelding owned by Patricia Pearce. They added one rail to their dressage score for a total mark of 37.2, making for just a 6.2 penalty spread among the competitors.

Germany’s Josephine Schnaufer-Völkel and Pasadena will retain their individual lead in the CCI4*-S at Le Grand Complet, which is also an FEI Nations Cup leg this weekend. Having completed dressage and show jumping with just one second of time added to their dressage mark, Josephine and the 14-year-old Westphalian mare by Primeur’s AS will carry on to tomorrow’s cross country on a score of 24.8.

New Zealand’s Tim Price, competing here this weekend alongside wife and fellow Olympian Jonelle as well as Holly Swain and Tayla Mason, holds second place aboard the 9-year-old KWPN gelding Happy Boy on a score of 25.2.

Competing for the host country and bringing up third place after two phases is Gwendolyn Fer and Traumprinz, a 14-year-old Trakehner gelding by Elkadi II, on a score of 27.3.

With three riders in the top 13, France holds the current Nations Cup lead on a collective score of 92.5. They’re followed closely by the Netherlands on a score of 95.9, and New Zealand’s squad stands in third overall on a score of 98.8.

Checking in on the American riders competing at Le Grand Complet, Avery Klunick and Pisco Sour are contesting their first CCI3*-S together and added four jumping penalties and two seconds of time in the show jumping for a two-phase total score of 35.3. This places them solidly in mid-pack in a nearly 100-horse strong division.

Competing in the CCI2*-S, Nina Diebold and Filippines du Thot sadly called it a day after two refusals at the first combination on cross country this afternoon. Kick on for the next one, Nina! 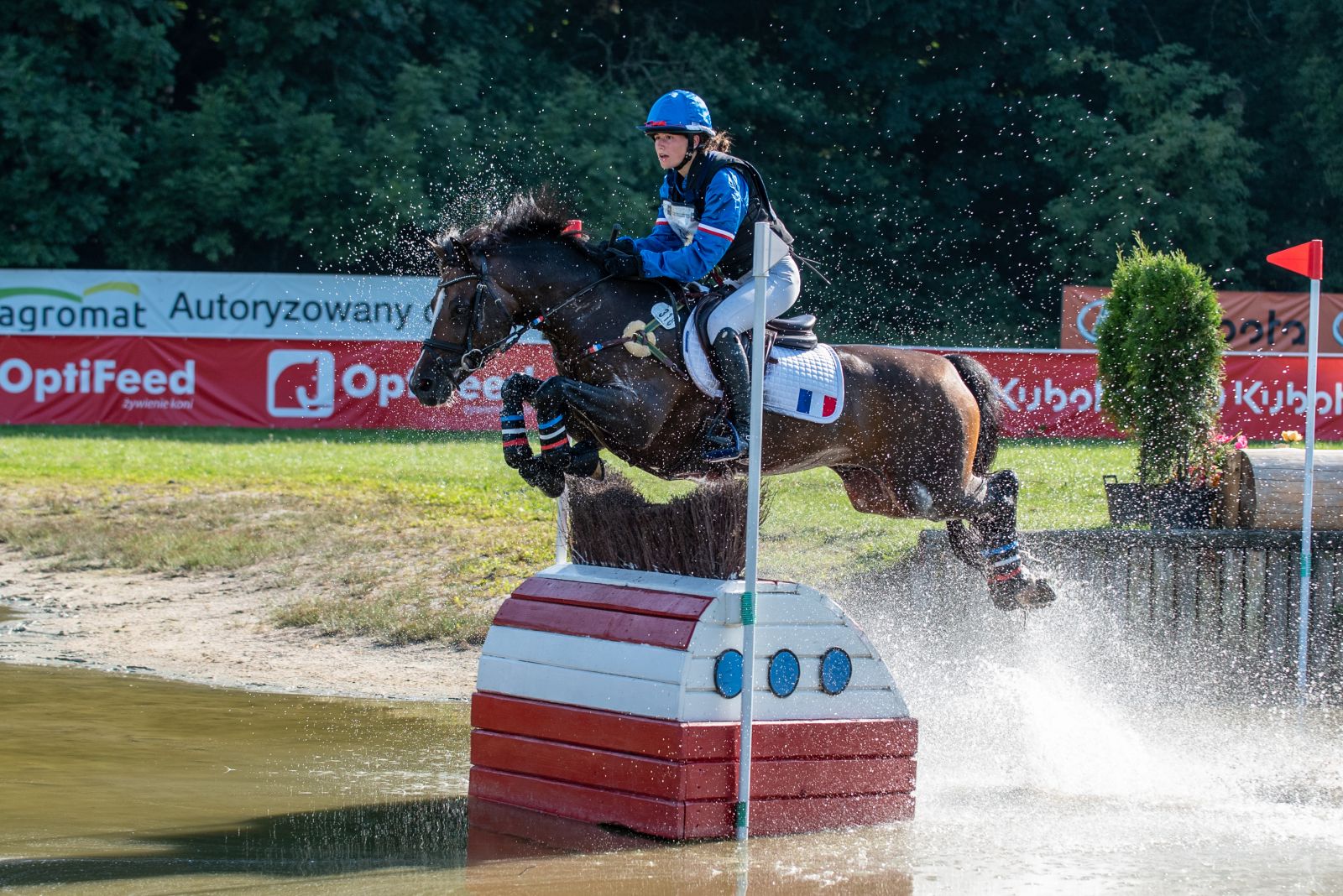 Taken from a press release:

Saturday’s cross-country trial did not bring any changes to the top of the team leaderboard. The French still hold on to the best result – 96,4, Germany sits in second with 101,2, and the Irish are third with 116,3.

Mae Rinaldi from France held on to her lead after dressage with Boston du Verdon, even after time faults – now riding with 28,4.

Irish rider Ben Connors with Cornafest Fred went up to the second position (from the 11th) after a clear round inside the time, their result is now 30,03. Sophie Weening from the Netherlands is now third riding Hip Hop, with 30,04.

The jumping trial, which will determine the new European champions, will be played out tomorrow.

Sunday is also the last day of the rivalry in the showjumping Pony European Championships – the individual final.