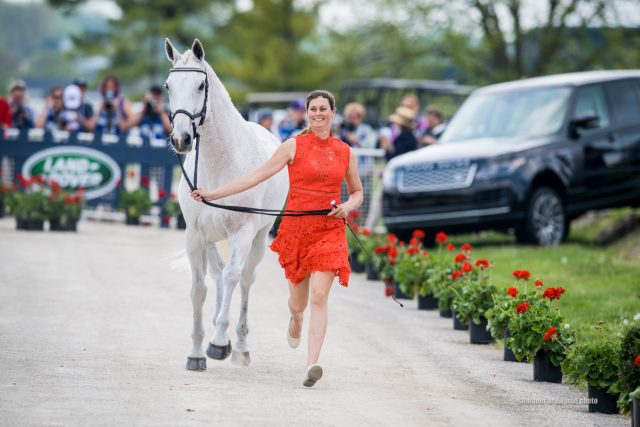 We are devastated to report the loss of Allie Sacksen’s Sparrow’s Nio on cross country at Morven Park today. The pair was competing in the Advanced B division when the 17 year old Connemara/Thoroughbred gelding collapsed between fences 19 and 20. A necropsy to determine the cause of death is pending. Allie was uninjured in the accident.

“The Morven Park Fall Horse Trials Organizing Committee and the Board of Trustees of the Westmoreland Davis Memorial Foundation regret to announce the death of Sparrow’s Nio, a 17-year-old Connemara-Thoroughbred gelding, owned and ridden by Alexandra Sacksen.

Sparrow’s Nio collapsed while competing in the Advanced Division at Morven Park Fall Horse Trials, between fences 19 and 20 of the cross-country phase. The cause of death is unknown at this time, pending necropsy. Sacksen was attended to onsite and sustained no apparent injuries.

The Horse Trials Organizing Committee, Board of Trustees of the Westmoreland Davis Memorial Foundation, and United States Eventing Association wish to extend their deepest sympathies and condolences to all connected to Sparrow’s Nio.”

Sparrow’s Nio was a fan favorite horse with his 15.3 Connemara-influenced stature – though you wouldn’t want to tell him he was smaller than some others. Together, Allie and Sparrow’s Nio tackled their first then-CCI4* at Kentucky in 2015, finishing 36th for their debut. Their partnership would take them all over the country, picking up where it was left off after Allie took maternity leave in 2017.

“It was almost like fate that he ended up with me,” Allie said in her Rolex Rookies interview in 2015. “He had come to my parents’ farm as a yearling, and then we reconnected years later after his owner had sent him to different trainers in an attempt to get him a little quieter. He just had a lot of spunk and buck in him.”

It is true friendship with a horse that often leads to success beyond one’s imagination. Sparrow’s Nio will be fondly remembered for his zest for beefy cross country tracks and for the love he shared with his best friend, Allie.

The team at EN sends their sincerest condolences to Allie and her team during this difficult time. We are so sorry for your loss.