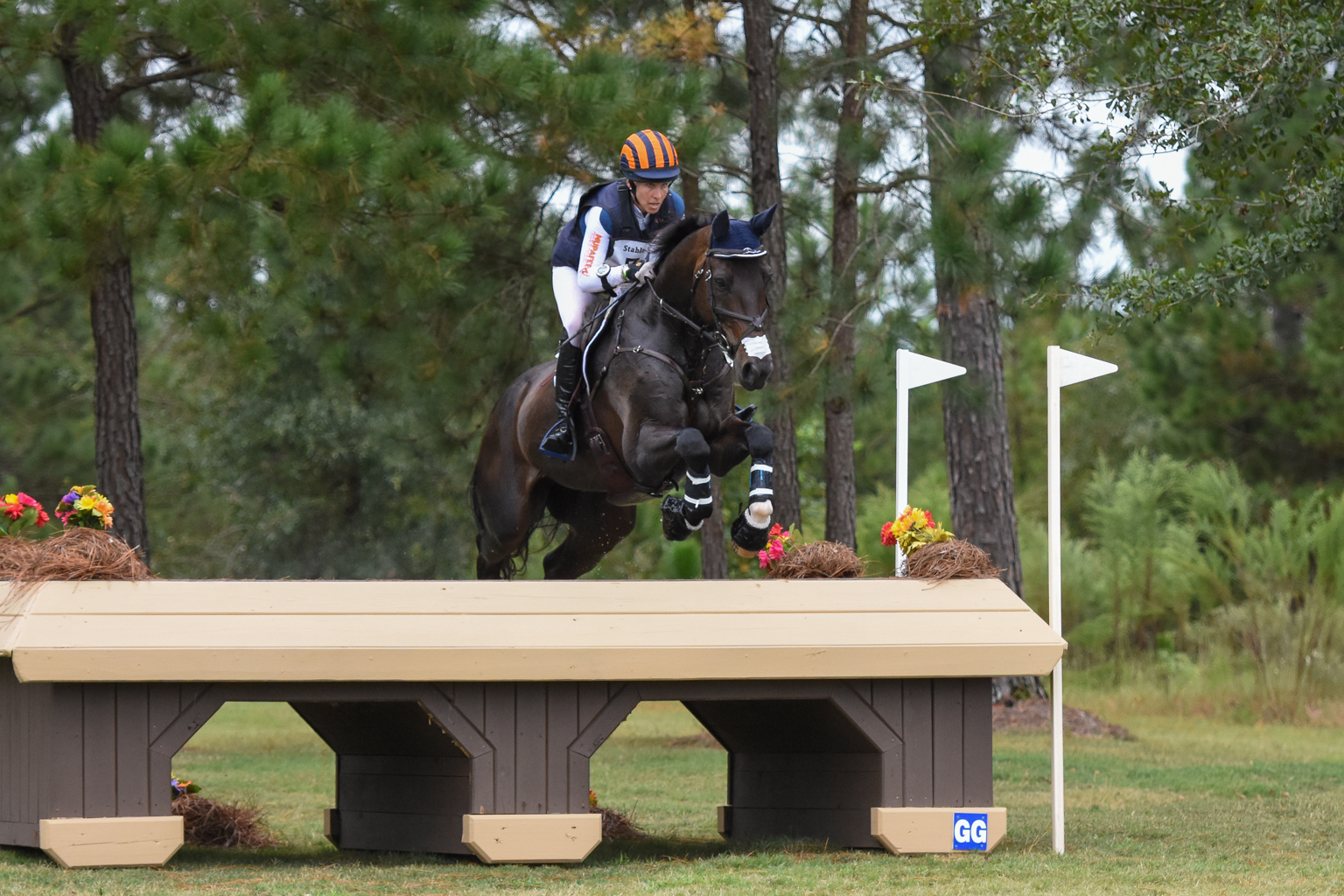 Good morning eventing fans! It’s a lovely overcast day at Stable View, and we’re all set to start the Oktoberfest CCI4*-S cross country. Our first pair out with be Nilson da Silva and Magnum’s Martini at 10:16 a.m.

Two pairs have withdrawn before the final phase: Ashley Johnson with Firefly and Ronald Zabala-Goetschel
with Wundermaske. This leaves us with 38 pairs to contest Capt. Mark Phillips’ beefy track. Click here to see what they’re jumping today. They’ll want to do all this within the optimum time of six minutes and 16 seconds.

Keep refreshing this page for all the latest!

12:39 Clayton comes home with 6.8 time penalties, so Liz Halliday-Sharp and Fernhill by Night are your CCI4*-S winners!

12:31 Doug Payne has picked up some time penalties keeping him out of the lead. That leaves only Clayton as he moves toward the finish.

12:23 Madeleine Scott and Crosby’s Gold have a third runout at 21 B, resulting in elimination.

12:23 Will Faudree provisionally has 12 time penalties, so now it’s only Doug and Clayton who could overtake Liz.

12:22 Madeleine Scott and Crosby’s Gold have a runout at 17b, the Dog Kennel Corner.

12:19 Waylon Roberts and Lancaster are on fire. They’re clear just four from home.

12:18 Madeleine Scott and Crosby’s Gold have a stop at 15B, a downhill wedge.

12:18 Liz has picked up 4.8 time penalties to have her on a score of 29.3. Will just finished without jump penalties, but he could go ahead along with Doug Payne and Quantum Leap and Clayton Fredericks and FE Stormtrooper.

12:13 Whoops! Annie Goodwin and Fedarman B accidentally jump the Intermediate Tiger Trap. Luckily, she realized her error before continuing. This will only cost her time penalties.

12:10 This just in: Liz and “Blackie” did have a handful of time penalties, but right now provisionally hold their lead on a score of 27. This could leave the door open for Will Faudree or Doug Payne to take the win.

12:09 Demons have been put to rest for Joe Meyer. With Clip Clop, he was slower and more careful to get a clear through 21.

12:05 Liz and Fernhill By Night are all business through the first water. They make it through the finish flags with no jump penalites — so now we eagerly await their time result.

12:04 Lucienne Elms and Diamond Duette have a stop at 19, the Pine Top Cross.

12:03 Liz Halliday-Sharp and Fernhill By Night, the overnight leaders, are on course.

12:01 Rebecca Brown and Dassett Choice go through the second water and 21 combination with ease, getting some cheers along the way.

11:54 Colleen Rutledge and Confidence Game are clear over the Stable View Brush.

11:50 An update on times: Zoe Crawford and K.E.C. Zara have so far been our fastest pair. They were five seconds above the optimum time.

11:46 Megan Sykes and Classic’s Mojah make a quick turn of the combination at 21.

11:42 Second-placed Matt Flynn and Wizzerd are making quick work around this track. They have a confident five strides through the combination at 21.

11:38 Clayton Fredericks and FE Stormtrooper make it beautifully through the tricky turn to the Amen Corner at the 21AB combination.

11:31 Doug Payne and Vandiver make it clear through the Hillside Rails at 9A and the Hillside Triple Brush at 9B.

11:28 Victoria Garland and FE Capricino decide to retire after having two stops.

11:26 Cornelia Dorr and Daytona Beach 8 make it clear through the first water.

11:25 Nilson Moreira da Silva and Rock Phantom have a runout at the second element at 17 for their second stop on course.

11:19 We are pleased to report that Ellie and Zick Zack are both ok after their rider fall at 14.

11:18 Leslie Law and First Class are clear through the Barry’s Desk at 4.

11:15 After holding for a few minutes, Ashlyn Meuchel and Emporium continue on course.

11:08 Elinor Mac Phail O’Neal parted ways with Zick Zack at the Alp Corner at 14B. She took a few minutes to sit and catch her breath, but she’s up on her feet now.

11:07 Zachary and Direct Advance improvise through the combination at 21AB, making it work but taking the flag at the Amen Corner.

11:04 Zachary and Direct Advance make a bold jump through 15AB.

11:01 Zachary Brandt and Direct Advance are our latest starters.

10:57 Karl and Fernhill Wishes make it beautifully through the 21AB combo.

10:55 Karl Slezak and Fernhill Wishes make it clear through the Skinny Brush at 15AB. Karl is the highest placed Canadian rider so far.

10:52 Ashley and Tactical Maneuver had a runout at the Amen Corner but make it safely through on the second attempt.

10:50 Ashley Johnson and Tactical Maneuver make it clear through the Elephant Trap at 16.

10:47 Hallie Coon and Celien had a runout at the Dog Kennel Corner, but made it clear on the second attempt.

10:37 No one has been able to catch the time yet, but Nilson has come the closest with 2.4 time penalties, finishing just 6 seconds over.

10:36 Lucienne Elms and Mistralou lose their impulsion and have a stop at the Amen Corner at 21B. They’re nicely clear on their second attempt.

10:33 Rebecca Brown and Fernhill Fortitude had the cleanest ride through 21AB so far today even gathering some applause!

10:31 Joe Meyer and Johnny Royale picks up another runout at 21B but they are clear at the second attempt.

10:29 the latest starter is Rebecca Brown with Fernhill Fortitude. Joe Meyer and Johnny Royale had a runout at the corner at 14B.

10:28 Colleen Rutledge and Covert Rights have a bold jump into the max-sized table at 21 A, and they take the flag at B, but they’re safe through there.

10:25 Doug and “Gin” are through the Amen corner at 21B. This is a cheeky combination presented by Capt. Mark Phillips, but so far riders have gotten the job done.

10:21 Magnum’s Martini slips a bit coming through the tricky combination at 21, but looks keen as ever as he clears the corner at B.

10:20 Doug Payne and Starr Witness have joined us on the course.

10:18: Nilson and Magnum’s Martini are out on course! They are clear through five.

Shelby Allen contributed to this report.